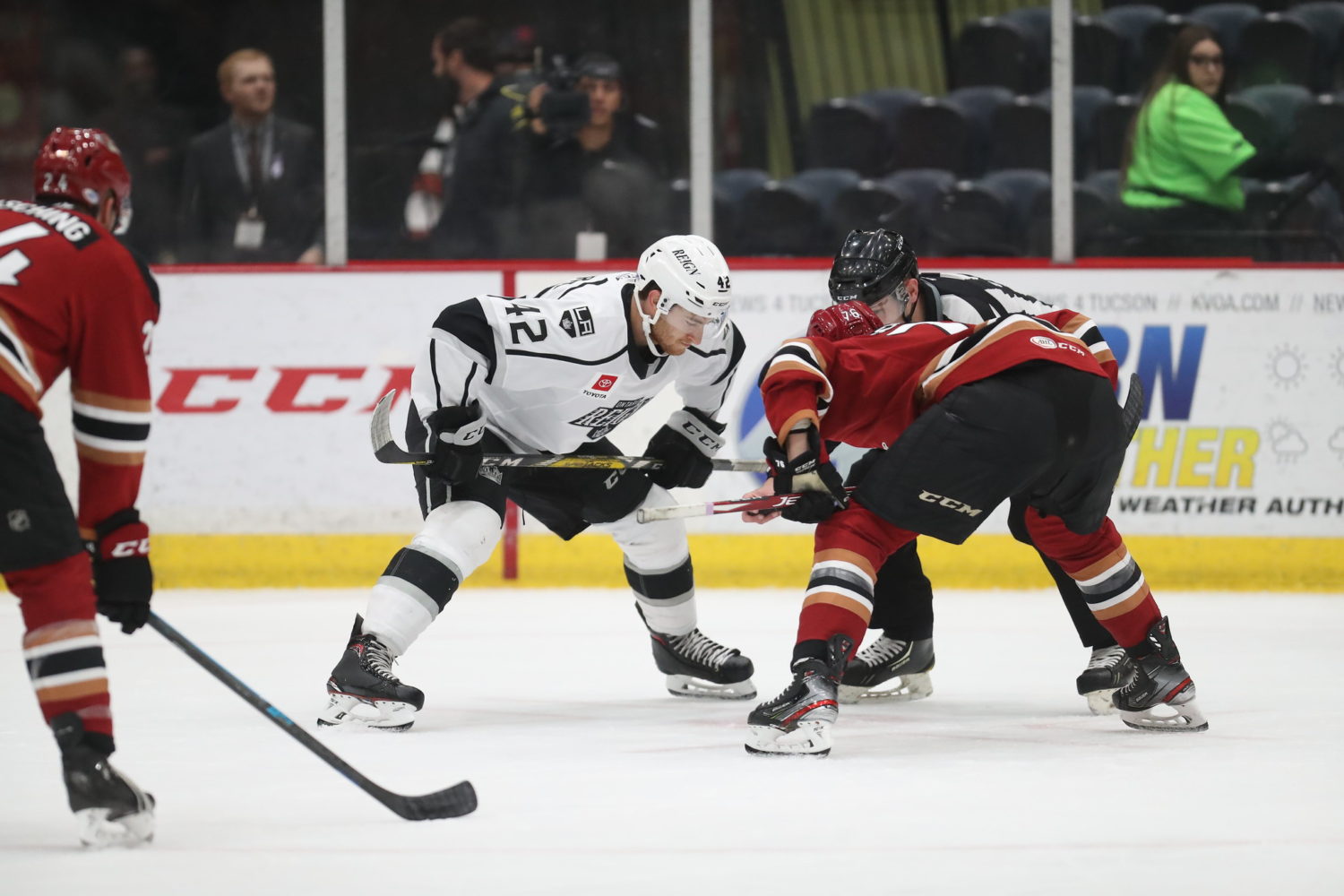 The Ontario Reign took on the Pacific Division leading Tucson Roadrunners on Friday evening and came away on the wrong side of a 4-1 scoreline, in the first of two meetings between the teams this weekend.

Ontario showed some positive signs, as the were improved from last weekend’s sweep against San Diego. The Reign created better chances, though they conceded far too many, but once again the story was the penalties taken. Seven power plays for Tucson, just three for Ontario, with one of those three being an abbreviated 30-second 5-on-4 and one a 6-on-4 with the goaltender pulled.

From the start, the Reign matched the division leaders at 5-on-5, but a pair of first-period minor penalties slowed the team’s momentum and it was never really regained. Tucson scored three times in the second period as it took over the game, with Ontario unable to regain its flow from the opening 10 minutes.

There were certainly several positives from the game – Forward Johan Sodergran scored his first career AHL goal in defeat, while forward Gabe Vilardi made his season debut, centering Matt Luff and Brett Sutter on the evening.

Vilardi created a pair of Grade-A chances, as he hit the post in the first period off a Sutter rebound and created a breakaway opportunity, that was denied by Comrie, early in the third. The breakaway opportunity came after he pickpocketed defenseman Kyle Capobianco, one of the best blueliners in the division, and created his own chance. More from Vilardi below, who is not expected to play in the second half of the back-to-back tomorrow, as a precautionary measure in his recovery process.

The Reign return to action in 24-hours time, with a rematch against Tucson tomorrow evening. Puck drop is slated for 6:05 PM Pacific Time.

Gabe Vilardi on getting back into the lineup tonight, nearly a year after last playing
Yeah, it was fun. It felt good honestly, it’s good to get the first one over with and I’ve got to keep moving forward.

On his two big chances, including a breakaway in the third period, and what he saw on that breakaway look
I was just talking about it, that’s where I’ve got to get my head back in the game. That’s not me, I don’t go five-hole, I don’t make that play. It’s just that’s where it’s going to take some time for me to really think the game like I normally do instead of, I don’t want to use the word “panicking” but feeling rushed almost. I knew I had a lot of time and I came in I tried to go five hole and that’s just not me, I don’t go five hole, I make a play. That’s where it’s going to take some time. A lot of other times out there, like on that 6-on-4, just feeling rushed again, coming in down the wall and dumping it in, it’s just little things. I dump it and I don’t put it in hard enough and the goalie stops it, so they get an easier breakout. It’s just little things like that. Obviously I want to watch the video, see what I can improve on, but it’s tough. It was my first game in over a year and I mean I’m trying to be realistic, that’s very hard. I’m going to have to, like I said watch video and really see. I feel like I had more time with the puck than I thought I did out there, but I feel like that’s normal, to feel panicky out there a little bit.

On his comfort level tonight, as compared to his four games last season
I mean, I’ve just got a different mindset. I understand what I need to do with my body. Looking back at last year, I was just, I don’t want to say I had pressure, but I feel like I was putting a lot of pressure on myself to perform, where as this year, I’ve got no pressure, I’ve got the support of everybody. Everybody’s been so supportive. I’m here, I’m doing the right things I think. I’m spending long days at the rink, I’m putting in the work, so hopefully it will pay off and like I said, I’ve got to keep on improving. This is just step one for me.

On how his legs felt as the game went along and if he felt he had more jump in the first than the third
Not even that, it’s just longer shifts. If you start in the d-zone and you get caught in the d-zone for the first 20 seconds, obviously I’m an offensive guy and I want to get some sort of offense on every shift if I can. I’m trying to really temple myself…if I’m in the defensive zone for 30 seconds, that’s my shift, I can’t try to go get offense, because if we get caught on the rush back, we’ll be dogging it for the rest of the shift and we can’t have that. It happened a few times out there where, a lot of miscommunications in the d-zone on my part, it’s because of me and I’m putting pressure on Luffer and Sutts, just because I don’t always know where to be and I’m not thinking straight because I’ve been out there for a minute. I’ve got to really bear down on that, but like I said, that’s going to come with time.

Mike Stothers on what he saw from Gabriel Vilardi’s season debut
I think it was a real good, solid start for Gabe. I went into the game not really expecting miracles out of him, the guy has been through a lot and he’s been off for an awful long time, but you can see there’s some hockey sense and some awareness, in all zones actually. He was pretty responsible defensively, he created things, had a good stick, positionally he’s good, won some big draws for us. As far as a debut goes, I thought it was very solid.

On the process of Vilardi’s timing coming back, as he plays in more games
Well, I would expect so, yeah. Again, there’s a lot of timing involved. You can practice all you want, but it’s not the same as game situations and he was playing against a good team. It was really encouraging and it was solid.

On Johan Sodergran getting his first goal, and what he’s seen from Sodergran
It’s always nice to see a kid get his first goal, especially when you’ve been waiting a while, it’s nice when you can get it in your first game but it doesn’t always work out that way. He’s trying and he’s working hard, he’s working on the things we’ve been asking him to. Was it a thing of beauty? No but it found a way to go in and he was in the right spot. He’s in front of the net, puck comes, rebound and he turns and he fires it at the net and it finds a way to go in.

On if he would agree that the Reign’s chances tonight were higher in quantity and quality than last weekend
I thought we created a little bit more. I think we had 30 shots. Again, whenever it felt like we had some momentum, we had some play and we can skate with a team and play with a team 5-on-5, we take a penalty. We took seven minors again, to their three, so clearly we’re not drawing penalties or we’re taking them and we did. Hooking, slashing, whatever stick infractions, it’s too much. Their power play is on the ice, our penalty killers are on the ice, we take ourselves out of momentum by taking ill-advised penalties.

On a strong start, and things changing after taking that first penalty
Yeah, that’s what it does, it interrupts everything. It interrupts your line combinations, it interrupts guys’ ice time and then, even if you kill it off, you’ve got to get it back, get the flow going and the bench going again. It’s something we keep harping on with a young team that we can’t keep hurting ourselves by sitting in the box.