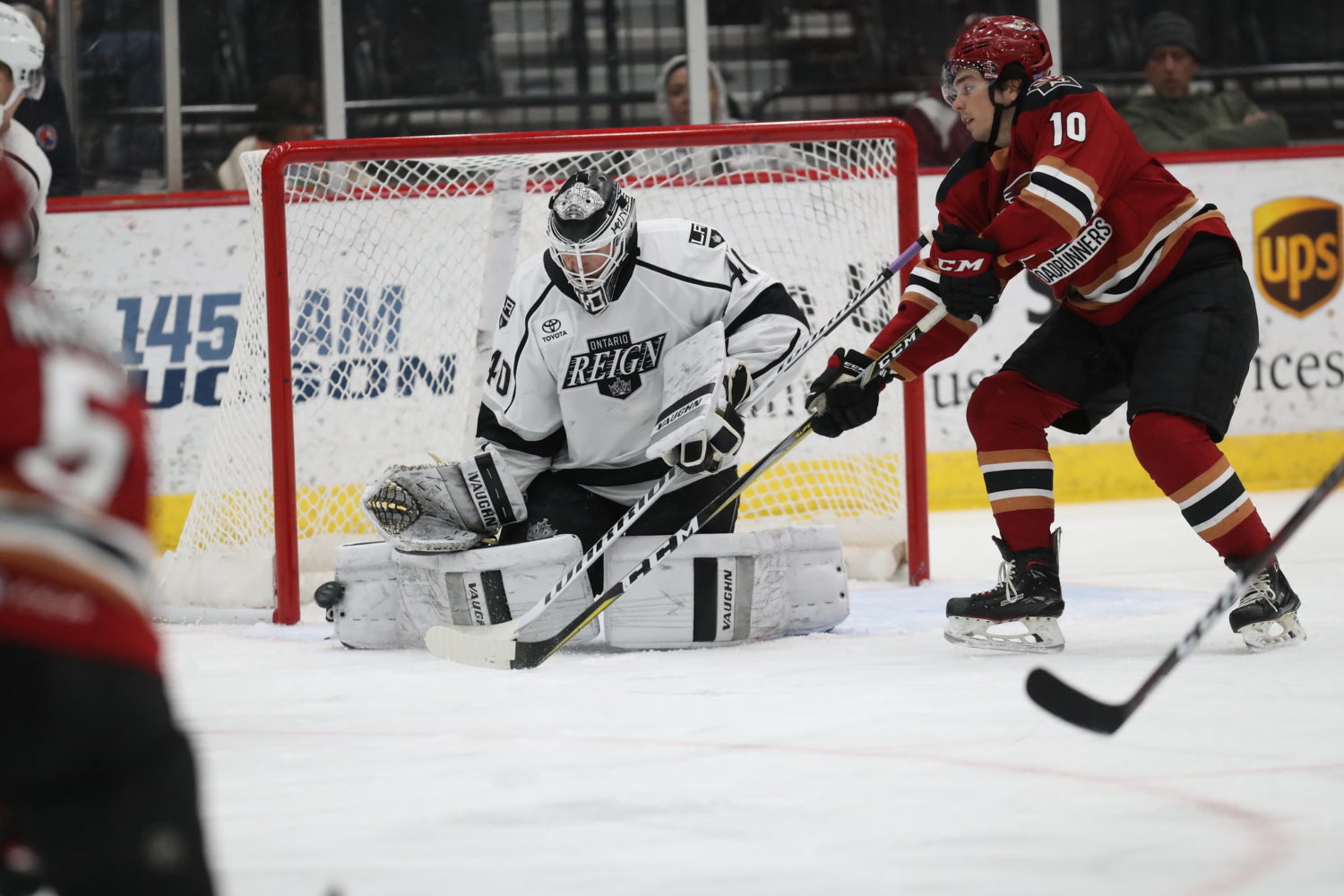 TONIGHT’S MATCHUP: The Reign hit the road for the first of two in Arizona against the Tucson Roadrunners. Ontario went 2-1-1 at Tucson Arena last season, while the Roadrunners took the only meeting in the 2019-20 season to date, held at Toyota Arena.

WHAT TO WATCH FOR: The Reign lineup remains a bit fluid tonight, but as of today’s morning skate, Matt Luff, Martin Frk and Gabriel Vilardi all appear on track to play tonight in Tucson. On late for extra work was the contingent of Matthew Villalta, Sean Durzi, Chaz Reddekopp, Mason Bergh, Stephen Baylis and Jacob Doty. Luff, assigned earlier today by the Kings, has not arrived in Tucson but is expected to in plenty of time before tonight’s action. Frk has been sidelined since November 6 with a mid-body injury but skated this morning and Vilardi is expected to make his season debut tonight.

HONEST GABE: Forward Gabriel Vilardi was assigned to Ontario, by Los Angeles, on Tuesday afternoon and is expected to make his season debut with the Reign this evening in Tucson. Vilardi appeared in four games for Ontario a season ago, including two against Tucson, and collected an assist, his first career professional point. Read more on Vilardi here from LAKI after he spoke with media following Reign practice on Wednesday.

MAGIC CONCH SHEL-DON: Reign forward Sheldon Rempal tallied an assist on Saturday in San Diego and now has points in back-to-back games. The second-year forward has seven assists on the season, which is tied for the lead amongst active Ontario players in helpers. Rempal had a multi-point night (0-2-2) in the lone ONT-TUC matchup of the season to date and has seven points (3-4-7) in seven career games against the Roadrunners.

KALE OF DUTY: Ontario defenseman Kale Clague tallied his team’s only goal on Saturday, as he pulled the Reign to within one with a third-period tally. Clague now has three goals on the season, which ties him for the team lead amongst defensemen, with his seven points leading all Ontario blueliners. Clague returns to Tucson Arena tonight for the first time since his 2018-19 season ended with a broken foot in the building in March 2019.

WHO VILL-ALTA: Goaltender Matthew Villalta returns to the Ontario roster after eight games in the ECHL with Fort Wayne. Villalta posted a 4-3-1 record with the Komets, in addition to a 3.85 goals against average and a .864 save percentage. The rookie netminder made his AHL debut with the Reign against Tucson on October 12, as he made eight saves in one period of action in relief of Cal Petersen.

SCOUTING THE ROADRUNNERS: Tucson enters tonight’s action as the top team in the Pacific Division with an 12-4-0 record, which includes a 6-1-0 mark thus far in November. The Roadrunners are led offensively by forward Lane Pederson, who had a hat trick against the Reign in October and has totaled 18 points (10-8-18) from 16 games played. Pederson’s 10 goals are tied for sixth in the AHL, with his 18 points tied for seventh.