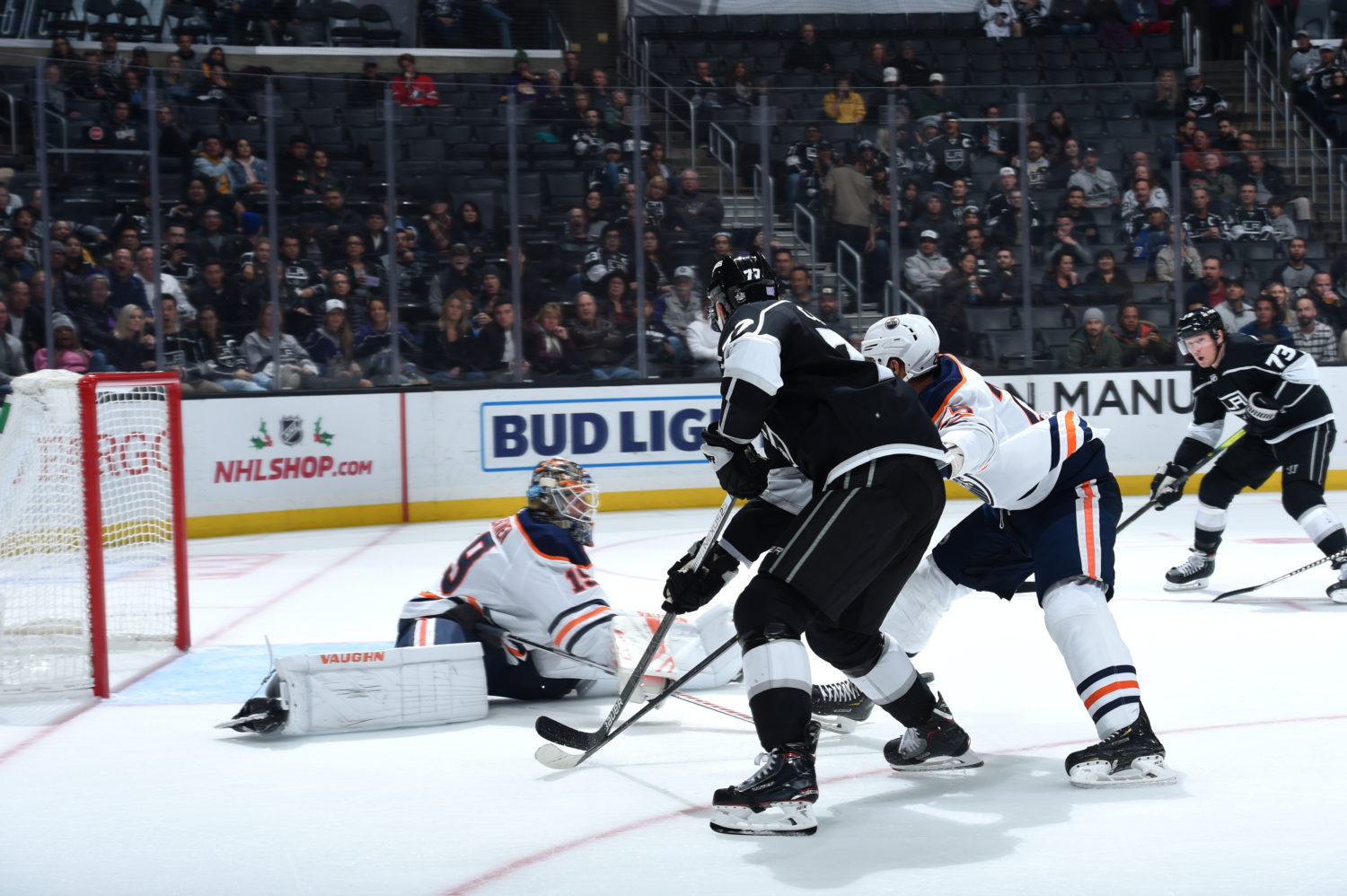 Todd McLellan, on game management:
It was what it needed to be. It was a true team win. I thought all four lines found a way to play a really strong shift after shift. The mistakes we made, the goaltender was there for us. Penalty kill against the top power play, we didn’t have to do it often, but when we did, we did a pretty good job. We even found a time to score a power play goal, so it was a pretty good night for our group. Complete team win. Something we’re happy about. We can see progress, and enjoy it this evening and back to work tomorrow.

McLellan, on what it means when Connor McDavid and Leon Draisaitl are -3 in the first period:
Well, it certainly makes you feel better. Our group doesn’t necessarily play from ahead all that often, and certainly not by three, so it makes you feel a little bit better, but when it comes to 29 and 97, as you mentioned, I don’t think you can take your foot off the gas. I thought we did a really good job of checking them most of the night. So were pleased with that, we’re pleased with some of the structure that we used, but like I said, no time to enjoy it. Bank it and keep moving on. We’ve got to get better.

McLellan, on the game going “go one or two ways” after McDavid’s early second period goal:
It can, and it has in the past. We’re becoming more resilient. We talk a lot about bump-up shift, the shift after a goal. The first 10 or 15 games, probably 10 games, it was costly. You could feel the shoulders go down and the belief or the air in the team kind of go out. Now we believe a little bit more, and we’re able to stick with it. Win that next draw, get back into the other team’s end and push back for it a little bit.

McLellan, on adjustments:
We didn’t do anything special. We just had a good practice yesterday, something we haven’t had in a long time, and I think we reacquainted ourselves with some of the finer points of some of the things we wanted to do, Polished things up and it proved effective for the most part today. [Reporter: How long had it been since practice had been to your liking?] Well, that’s a loaded question, because I haven’t disliked our practices. Our practices have been good, but we just haven’t had a chance to really get good hard ones. We’ve been managing fatigue, managing the gas tank, if you will – both mentally and physically – so we haven’t had the aggressiveness in practice that we needed. Yesterday, we did. We had a couple days where we could rest. I think it paid off today. So, we’ll g et a quick one in tomorrow and get ready to play again.

McLellan, on the importance of “execution” and “focus” when trying to execute a game plan:
We had a game plan, there’s no doubt about it. We knew what we wanted to do and how we wanted to do it, and the guys executed it. But it was all well within our structure. We weren’t wandering out of position to do certain things.

McLellan, on Jeff Carter’s role at second line center:
Well, he’s a utility guy. He’s probably played defense at some point, he just hasn’t played goal yet, and we don’t need him to do that. Just a trusting guy that you can put out in every situation, every scenario. Understands the positions and the roles and the responsibilities that go with it. Has the ability to check, has the ability to provide offense. Complete player. We’re fortunate to have him right now. He’s having a hell of a year.

McLellan, on whether the team’s confidence at home is growing:
We feel good about playing here, we want to make it hard for our opposition to come into our building. We know what it feels like on the road. There are some tough buildings to play in. This building has and will be that building again. We’re trying to create that environment. We’re trying to make it hard on teams to do the things they want to do in our building. Having the last change, the last match today definitely helped us as well.

McLellan, on the difference between the Oilers last season and this season:
Well, they’ve got goals. I think they’ve got seven, eight, nine power play goals from James Neal. That trade, Looch is a tremendous player. You guys know that from him being here, but he didn’t provide those eight or nine security goals, if you will, on the power play. That makes a huge difference. They’re confident. They’re off to a good start. They’re playing well. It’s been a while since I’ve been around that team, so Hitch would probably be a better guy to ask or even Trent Yawney next door.

Drew Doughty, on whether this was as much “in control” the team had been in a game:
I don’t know. We know the star power they have on that team. Two of the league’s top players. So, I don’t think we were ever satisfied throughout the game. Maybe now, as we look back on it, yeah we are, but we were always worried that those tow could make something happen at any point. We stuck to the game plan – I guess that’s kind of what you were asking. I thought that was probably our best game throughout 60 minutes, for sure.

Doughty, on the importance of responding well after McDavid’s goal:
Yeah, that was huge. I thought we had two really good shifts after that, and I think I remember Todd saying something about it on the bench. We came out hard and we attacked and we got some chances, and that’s what we’ve got to do every time they score a goal against us. I know it’s easier said than done, but just having that mentality to go back on the attack and not sit back and be down on ourselves is the most important thing.

Doughty, on how to reduce Edmonton’s neutral zone speed:
Obviously we keyed on two of their top players. We know both of them thrive throughout the neutral zone and obviously in the offensive zone. With Connor’s speed, you have to take him away in the neutral zone, or else you’re going to leave your defenseman flat-footed and you’re going to get burned. He’s going to get breakaways. So we obviously put Kopi on him tonight, and I thought Kopi had a great game just shutting him down. Every time Connor was loose in the neutral zone, if you watched it closely, Kopi would come over top of him and take him away, and I thought that was a big reason. He still scored one goal, but I’ve seen him get way more chances and way more breakaways in a game than he did tonight.

Doughty, on whether there’s an emphasis on physicality with McDavid and Draisaitl:
You’ve always got to be physical with those guys. No one likes to be hit hard, no one in this league wants that to happen. So espeically on top guys, you’ve got to be hard on them and try to get under their skin and take them out of the game, a nd we did a decent job of that tonight.

Doughty, on Sean Walker’s progress:
Yeah, he’s been good. He can skate pucks out of the zone. Obviously, he’s on the left side, so it’s kind of tough on him on the breakouts and stuff like that. Maybe I don’t use the left side as much as I have when I have a lefty, but the thing about giving it to him is he just skates it right out of the zone all the time. I like playing with him offensively. We haven’t reached our peak yet. I know we’re going to be pretty dominant offensively. I have him over there for the one-timer all the time, and I’m going to find him tons of times on the blue line, he’s going to find me. So, I think it’s just the beginning for me and him.

Doughty, on whether he had drawn up that play to hit Jeff Carter in stride on Tyler Toffoli’s first goal:
I knew we wanted to change, so we were trying to get a couple guys off the ice. I think originally I was just waiting because they had two forecheckers on me – one on my partner and one on me, and then I remembered I had one guy coming at me and I just had to make a pass through the triangle to Jeff, and I could see that developing. Toff had the outside speed, and luckily Jeff saw that too and made a great tip pass to him. Yeah, in the past, it’s always like, ‘don’t sit back, just get the puck going, just get the puck going,’ and that is how the game has gone. Todd realizes different moments in the game, and when you have a change, you’ve got to wait for you guys to get on the ice. Credit to our coaching staff in allowing us to make plays and read the plays the way we want to.

Doughty, on whether the team is more optimistic they’ll get back in the race:
Yeah, I think we can be. I don’t really care what other people think. We can be more competitive than we’ve shown. We’re in so many games that we’d lost earlier in the season, and think you can see, you guys have been here the most, and I think you guys have seen how much that we’ve grown over the first 20 games. I’m just looking forward to hopefully moving up in the standings and giving a push for playoffs. I know a lot of people don’t think that’s possible, but all of us in here think there’s a chance at it.

— With the win, Los Angeles improved to 87-88-39 all-time against Edmonton, a record that includes a home mark of 48-37-21. They are 17-2-0 in their last 19 head-to-head match-ups at Staples Center. With identical 1-1-0 records, these teams have two games remaining: December 6 at Rogers Place and February 23 at Staples Center.

— Jonathan Quick is 4-2-0 in November with a 2.20 goals-against average and a .922 save percentage. He won his fourth straight game.

— Drew Doughty (0-3=3) recorded three assists in the game for the first time since March 19, 2018, a 5-4 overtime win at Minnesota. It is the eighth time in his career that he has had at least three assists in a game. His plus-4 rating tied a career-high (seventh time).

The Kings are scheduled to practice at 11:00 a.m. at Toyota Sports Performance Center on Friday, November 22.