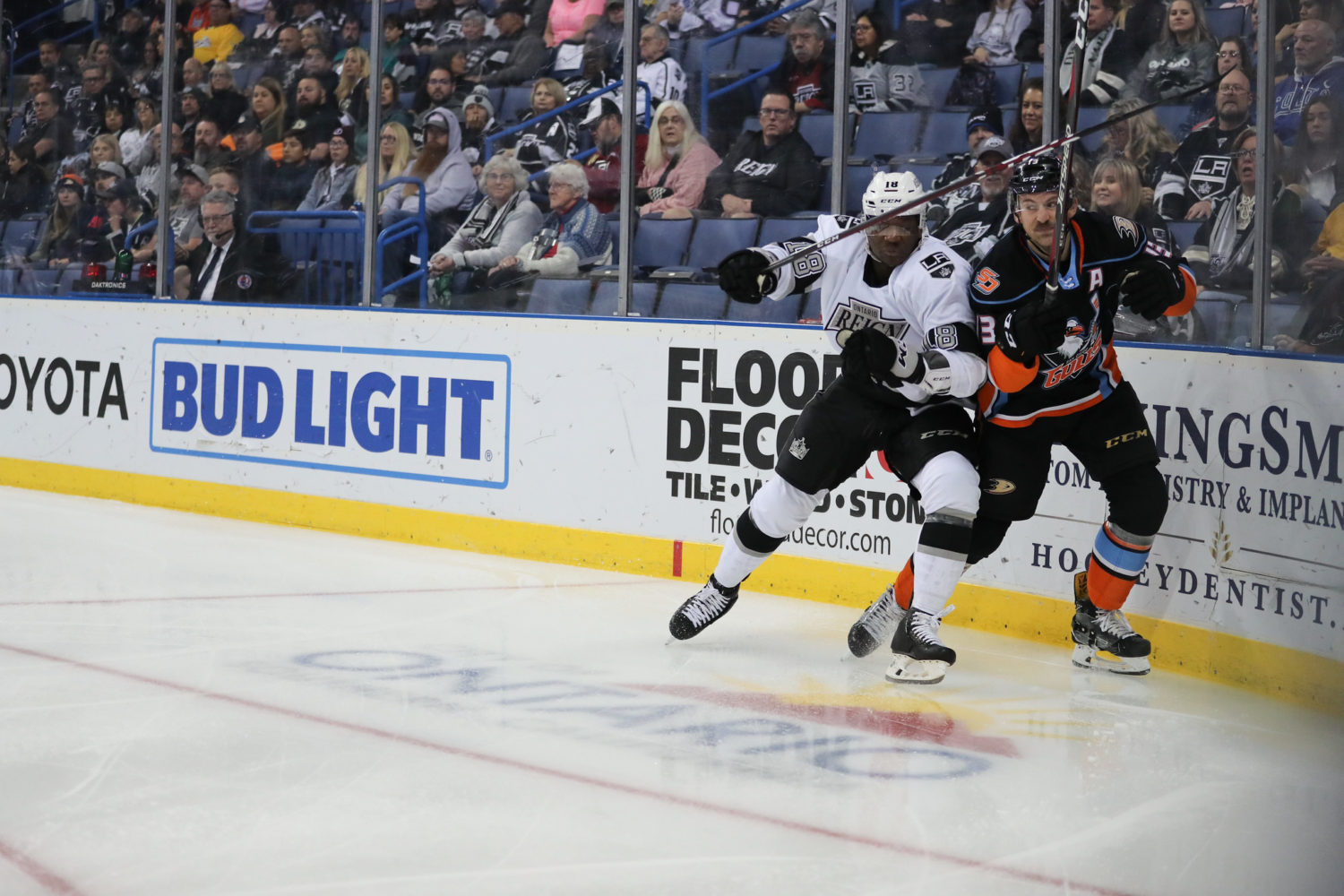 The Ontario Reign dropped the first of two games this weekend against the San Diego Gulls, by a 6-2 final on Friday evening on home ice. Ontario was heavily outshot in the defeat, their first of the season against San Diego, with a -30 shot differential when the final buzzer sounded.

The Gulls posted 17, 22 and 16 shots, per period, on the evening as the Reign fell to 8-5-2 on the season. At one point in the second period, Ontario was on the wrong side of a 31-4 shot differential. The Reign were without forward Matt Luff, recently recalled to the NHL and Martin Frk, who is still out of the lineup with a mid-body injury, and struggled to replace them this evening in terms of creating chances offensively.

On the positive side, defenseman Sean Durzi tallied his first career professional goal, an early strike in the third period that brought the Reign to within a goal, with time to spare. Cal Petersen did all he could to keep his team in the game, as he made a season-high 43 saves before what can probably be deemed as a mercy pull midway through the third period, with the score at 6-2. Goaltender Cole Kehler played the final 8:23 in net and turned aside all six shots he faced in his AHL debut.

Ontario won’t have long to wait for another shot at their divisional rivals, who have now won six of seven after starting the season 0-6. The two teams will play again tomorrow evening in San Diego – A quick turnaround for a young group looking to bounce back.

On how he feels his play away from the puck has come as of late
I realize that defense is huge here. It’s hard, the offensive play. If you want to be a centerman, you have to be good in your end.

On who he feels he’s created chemistry with this season
Yeah, I’ve been playing games with Kempe. We’re trying to improve our chemistry all the time. For myself, I’m struggling with points and goals, so I’m trying to work hard every day and working hard is key.

On having a player like Kempe around to help him as he transitions to the North American game
Yeah, of course it helps. He’s older than me and he knows the game and what the league is here and what the American Hockey League is. It’s a lot of help for me. [Reporter: What’s been the hardest part of the move so far?] Of course, the game is so much different here than Europe. You don’t have that much time with the puck and it’s more like an up and down. It’s a big city and the language is different than I’m used to. I’m feeling more comfortable here.

Mike Stothers on a disjointed first period, with much time spent on special teams
Yeah, I mean we were shorthanded five times. It only registers as four, but we had a double-minor to Durzi that starts in the first and carried over into the second. It’s crazy. I’m not saying it as an excuse, but I mean it’s certainly an effect on how you try to establish any kind of flow or forecheck and your bench has already been shortened. You’ve got guys who don’t kill penalties like Kupari, he’s sitting on the bench when you want him on the ice. When he sits, it’s hard to get back engaged later on, because it’s just hard to get the juices started again. Then you look at it as did we truly earn those penalty minutes, were they poor penalties or were they questionable calls? I’m not going to get into that right now, but bottom line is, at the end of the night, we were shorthanded nine times. You’re not going to win many hockey games when you’re shorthanded nine times.

On if Durzi’s penalty overshadows his first pro goal
No, it’s always exciting for a kid to get his first goal, I don’t think anything should interrupt that. He’s been waiting a while, I think that’s game eight for him, so it’s obviously a big thrill for him. There’s a couple of ways to look at it, you say you can’t really celebrate your first goal if you’re getting shellacked, but how do you tell a teammate or a young kid to contain his emotions, you should be excited to score your first goal. Let him enjoy it.

On replacing the chances and scoring of guys like Grundstrom, Luff and Frk
We didn’t. That’s a lot of arsenal/talent/skill up front that we don’t have a the moment. It’d be crazy to think that someone’s just going to automatically step up and fill the shoes of Carl Grundstrom, who’s maybe a tweener and maybe Luffer’s a tweener. Marty’s a good, solid veteran player that’s scored 30 goals in the American Hockey League before, so it’s tough, but it’s an opportunity for other guys to at least chip in. It just slots everything differently. Your lines are different, your minutes and matchups are not the same without those guys. But that’s what we’re here for, is to move players along.

On if it’s extra frustrating tonight of that kind of performance coming after a full week to prepare
I don’t know if frustration’s the right word, but I think you need to be cognizant of what you have and you can’t put undue expectations on what you have. It’s no secret, and I’ve been saying it for quite some time now, the record was reflective of the outstanding play of our goaltender. So if he has anything less than outstanding, we might have been doing this a lot more often, true or false? It is what it is. We didn’t have the three players that we had at some points during the season. Cal was certainly entitled to be ordinary, because he’s been phenomenal. It is what it is. The good thing is we get to play tomorrow, so we’ll get right back on it. We’ll get on that bus at two o’clock, we’ll roll into San Diego and we’ll get going again.