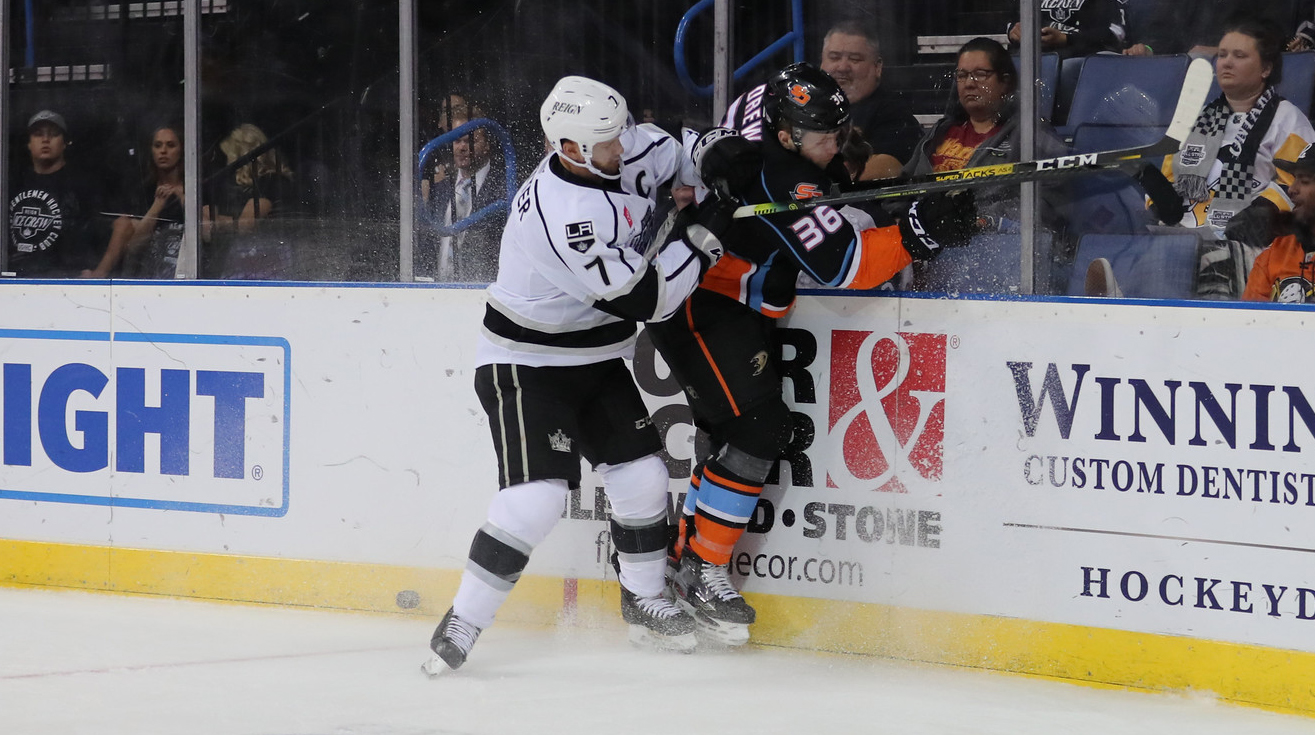 TONIGHT’S MATCHUP: The So-Cal Series returns to action tonight, as the Reign and Gulls square off for the third time this season. The two sides will also meet again tomorrow evening in San Diego.

WHAT TO WATCH FOR: Ontario is likely to use an 11-7 alignment this evening, with defenseman Chaz Reddekopp checking in and forward Drake Rymsha on late for extra work, along with goaltender Cole Kehler, defenseman Ryan Stanton and forward Gabe Vilardi, who is still yet to be assigned officially to the Reign roster. Forward Martin Frk is still injured (mid-body), but expect to see forward Mason Bergh in tonight’s lineup, after he was recalled yesterday from Fort Wayne. Cal Petersen is likely to make his 15th consecutive start between the pipes.

SO-CAL SERIES: The So-Cal Series is back for Round 3 this evening, part of a home-and-home on the weekend. Ontario is 2-0-0 against the Gulls this season, powered by a pair of victories (6-2 and 3-2) in late-October. The Reign got a late goal from Matt Luff in the lone meeting of the season in Ontario to break a 2-2 deadlock on October 26. In the 6-2 win on October 25, forwards Jaret Anderson-Dolan, Mikey Eyssimont and Brett Sutter all had multi-point games.

SEEING ZEROES: Of Ontario’s last four games on the road, three of the four tilts ended in a shutout, one for the Reign and two against. Ontario was blanked on November 5 in Colorado and November 10 in Iowa, with a 23-save shutout for Cal Petersen in the middle on November 6 versus the Eagles. Overall, Petersen has two shutouts on the season, with a 41-save effort on Opening Night against San Jose as well.

TIP OF THE ICE BERGH: Following the recall of Matt Luff by the Kings, Ontario made a corresponding move as they recalled forward Mason Bergh from the ECHL’s Fort Wayne Komets. Bergh totaled 12 points (7-5-12) from 12 games played with Fort Wayne, and was named as the ECHL’s Rookie of the Month for October. Bergh made his professional debut with Ontario last season and collected a goal from three games played with the Reign.

GO SEE CAL: Ontario goaltender Cal Petersen is on track to continue to bolster his already league-leading totals in several categories. Petersen leads all AHL netminders in games played (14), wins (8), minutes played (827:40), saves (466) and shots faced (500), leading in the latter category by more than 100 shots against. Petersen has made at least 35 saves seven times this season, including four of his last five starts.

SCOUTING THE GULLS: After a slow start to the season, San Diego has won five of its last six games, following the defeat in Ontario in late-October. The Gulls set a franchise record with nine goals scored in a 9-3 win over Stockton this week, as captain Sam Carrick scored a hat trick. Carrick leads all San Diego skaters with 12 points (7-5-12) from 12 games played this season, while forward Kiefer Sherwood leads the group with seven assists.