Waking up with the Kings, and Kovalchuk: November 13 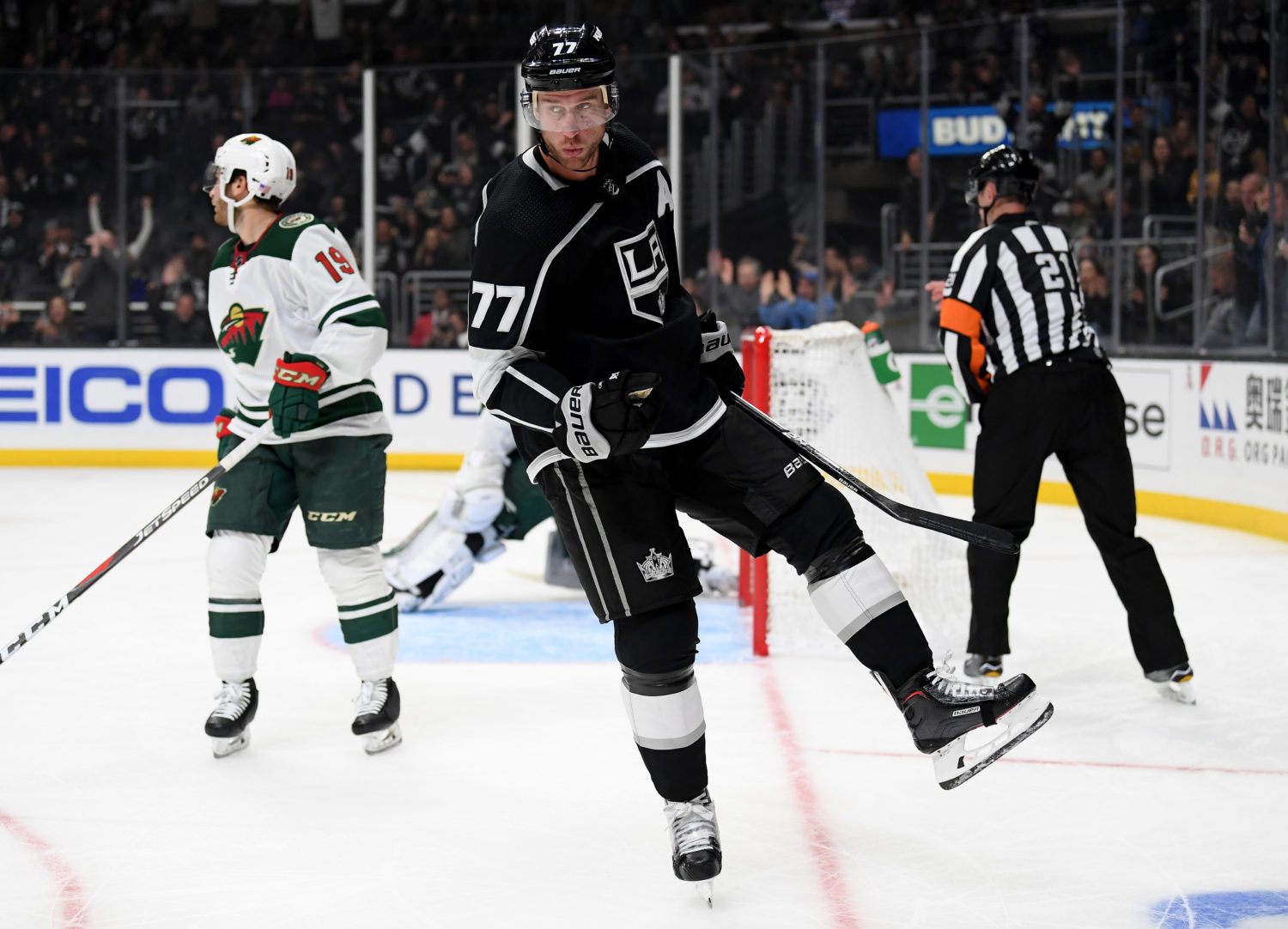 Having spent a decent amount of the first period on Kovalchuk Kovalchuk Kovalchuk – more on him below – there were some encouraging and easily visible trends in Tuesday’s 3-1 win over Minnesota to begin a three-game, week-long home stand. Jonathan Quick was very good and continues to gravitate towards “33-year-old Jonathan Quick but behind a stretched-out lineup” and away from “the previous Kings-Wild game.” That’s important, and with another game or two that becomes a trend. Matt Luff had energy, applied his skating defensively and in limited minutes was a nuisance without the puck, aspects of his game he’s looking to accentuate. We didn’t really see him use his best weapon, a sharp and accurate wristshot, but he moved well and didn’t offer any stark reason to come out of the lineup. Along with Quick, Drew Doughty and Alec Martinez also served as lynchpins of the team’s shorthanded success but defended effectively during five-on-five play, where they combined to block their nine shots. Speaking with Doughty a few times recently – and Doughty has had to play a lot more more defense this season – he’s been really high on his ability to “control the game” in the last two weeks, something that hadn’t come quite as fluidly early in the season. I also noticed Sean Walker continuing to win short, 20-foot races to pucks and position himself well to make a play in doing so. He logged a career-high 24:35. They won important parts of the game by scoring early, killing off three power plays in the first 24 minutes, and working and executing their forecheck well after Minnesota’s goal. And proud we are of all of them. 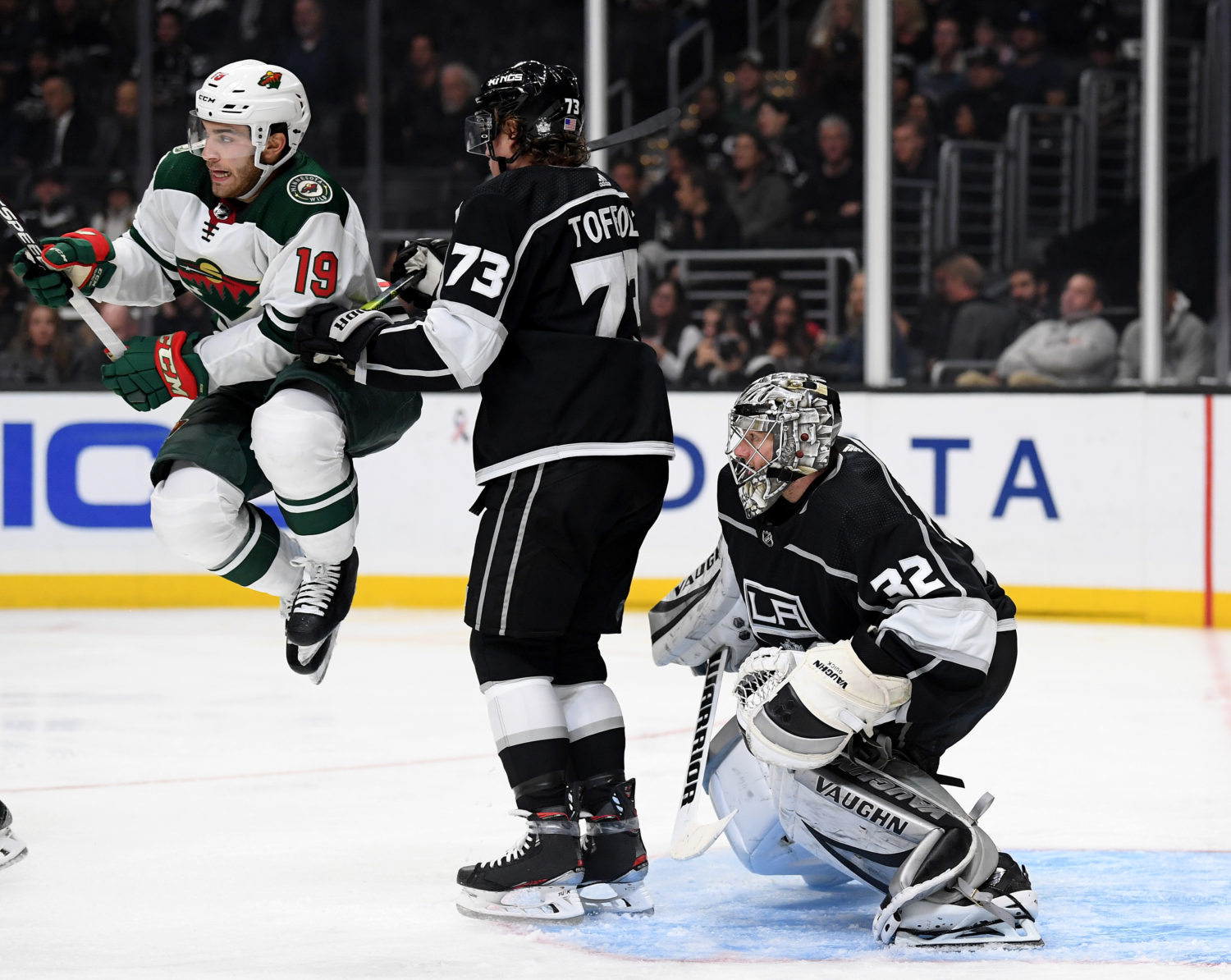 If it took me an hour to edit one paragraph last night, I’m not sure how I’ll write these next three. That’s because the Kovalchuk situation, of which I know little at this moment, is detailed and layered and particularly complex. I’ll try to start what I know and shared on Twitter, but that term we all used yesterday – “murky” – yeah, that still applies. More layers will soon reveal themselves, but I’m of the general sense that this partnership, which has been complicated before, is entering that beginning-of-the-end period. That is concerning because of the salary cap implications, which are below. But, first: Kovalchuk and the Kings entered the year with the clean slate in sports-speak, hoping to move past the depths of the 2018-19 season when the forward was dropped to the fourth line, healthy scratched, and remained at home while the team swung through Western Canada late in the season. There’s not a great deal of precedent for 35-year-olds skating and practicing with the development staff rather than traveling and playing games. But prior to that, Kovalchuk’s name was in the trade market, and while I didn’t believe the volume to be particularly strong, there were teams that inquired and remained in contact on him. If any advanced discussions took place between the Kings and another team, I am unaware of them. Obviously, Kovalchuk’s no-movement clause complicates and limits the possibilities in the trade market, but similarly, if that was any sort of hold-up last season, I’d be surprised. 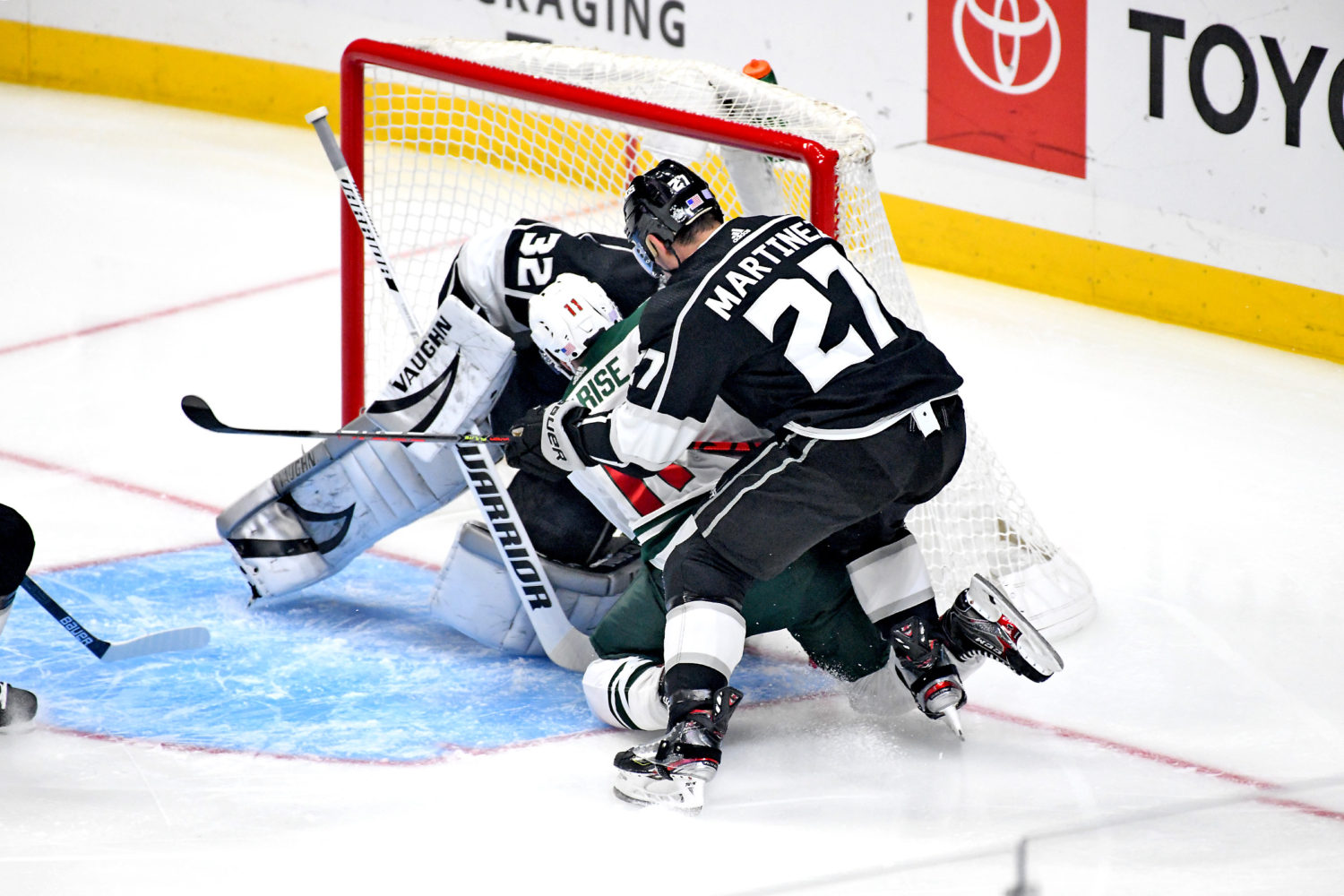 That all occurred while Willie Desjardins coached the team. When Todd McLellan was hired, he built his relationship with Kovalchuk first by communicating over the phone and then by meeting him in person. From the preseason:

“I’ve enjoyed my time around Kovy so far,” McLellan said Monday. “He’s a really smart guy. He looks at the game a certain way and he’s given us what he has at camp so far. He’s been willing to open up and learn. All of that’s great to this point now when the games start and coach-player relationship, player-team relationship, the whole group together all has to blend and everybody has a job to do. I’m going to give our group everything I have and I expect them to give each other that as well – and that goes from Kovy all the way through Kopi down to Bjornfot, who’s been here for 10 days now. Everybody has to give each other what they have, and there’s no cutting corners or cheating. If we get that from each other on a daily basis, I don’t know if that’ll be enough to win a championship, but that’ll be enough for growth, and that’s what we’re looking for.”

The two had met recently met for lunch to establish and build their relationship – and, per Kovalchuk, McLellan paid. “How does that happen?” the coach joked.

“It was a great lunch. We talked a little bit about the past, and the past isn’t just last year, his time here. The past can go way back. I know other people that have coached him, i know players that have played with him. We talked about his family, the importance of what happens there and how his kids are involved in different sports. I talked to him about how I would likely use him, a t least to start with, and then after that, he and all the players, they dictate how much they play, where they play, who they play with with their performances. It’s what i really believe in. People think that we determine ice time and we determine who’s in and out of the lineup. Quite often, the players do that themselves, and i know you asked about Kovy, but this is a general, ‘everybody’ comment in my mind.”

I’d also been of the sense that all parties – management, coaching, Kovalchuk – went into the season with genuinely open minds towards a working partnership and the understanding that Kovalchuk would also need to demonstrate greater adherence and buy-in to the on-ice systems and detail and not improvise as much. He got off to a hot start and was deployed regularly by Todd McLellan on the power play, at even strength and in overtime, but had recently dropped in the lineup and was playing either with much younger players or, occasionally, alongside those associated in more checking roles. The team wasn’t winning. He hadn’t scored in nine straight prior to his healthy scratch Tuesday. From gathering what I have, I also get the sense, like many others, that the maneuvers to expedite a separation are very much in motion. 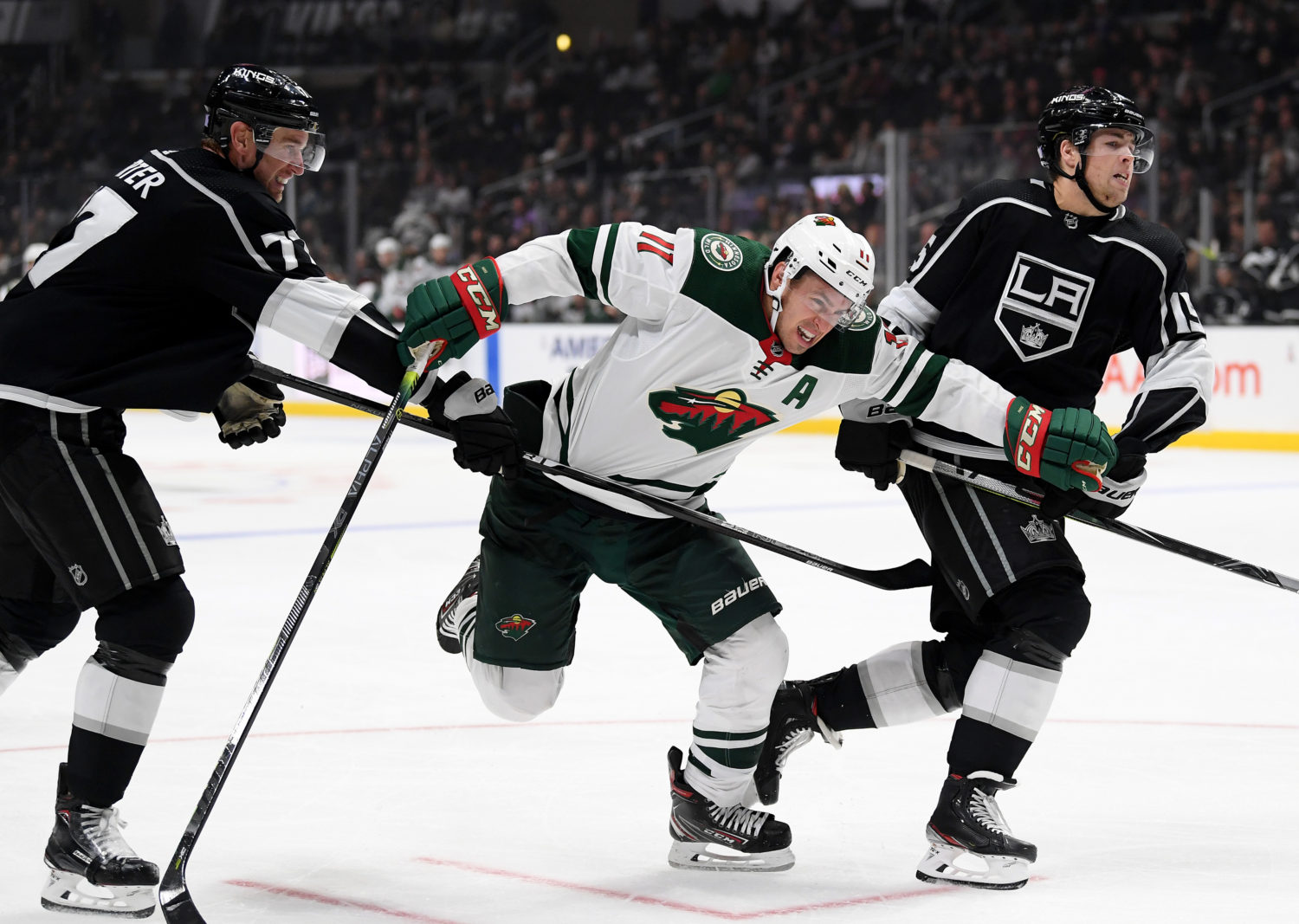 Part of the team’s plan is to build around Drew Doughty and Anze Kopitar with their young, developing and talented prospect base, but this threadbare relationship is an example that not only will such reinforcement take time, but that they’re yet to extricate themselves from both the dregs of and reason for their needed rebuild. Aspects of their plan also include attempts to divorce themselves from weighty contract obligations, but those exercises don’t come with a great deal of leverage at the moment. Kovalchuk has an NMC and another year remaining on a contract that carries a $6.25M hit. As for this year, he’s set to receive a final signing bonus on December 15 but substantially less in his weekly paycheck, which along with the $4.25M actually owed him next year would make him a more appealing asset – in a month. I don’t know what the endgame will be and I’m not insinuating this scenario or that scenario over any other, but independent of a trade, if he were to leave or somehow become inactive, he’d still cost $6.25M against the cap next season because he signed a 35+ contract, the details of which are explained here. Again, that’s not to alarm or to suggest that’s the most likely endgame, but rather to illustrate additional complexities of the situation. Some absorption of capital seems inevitable, whether by trade or other means. 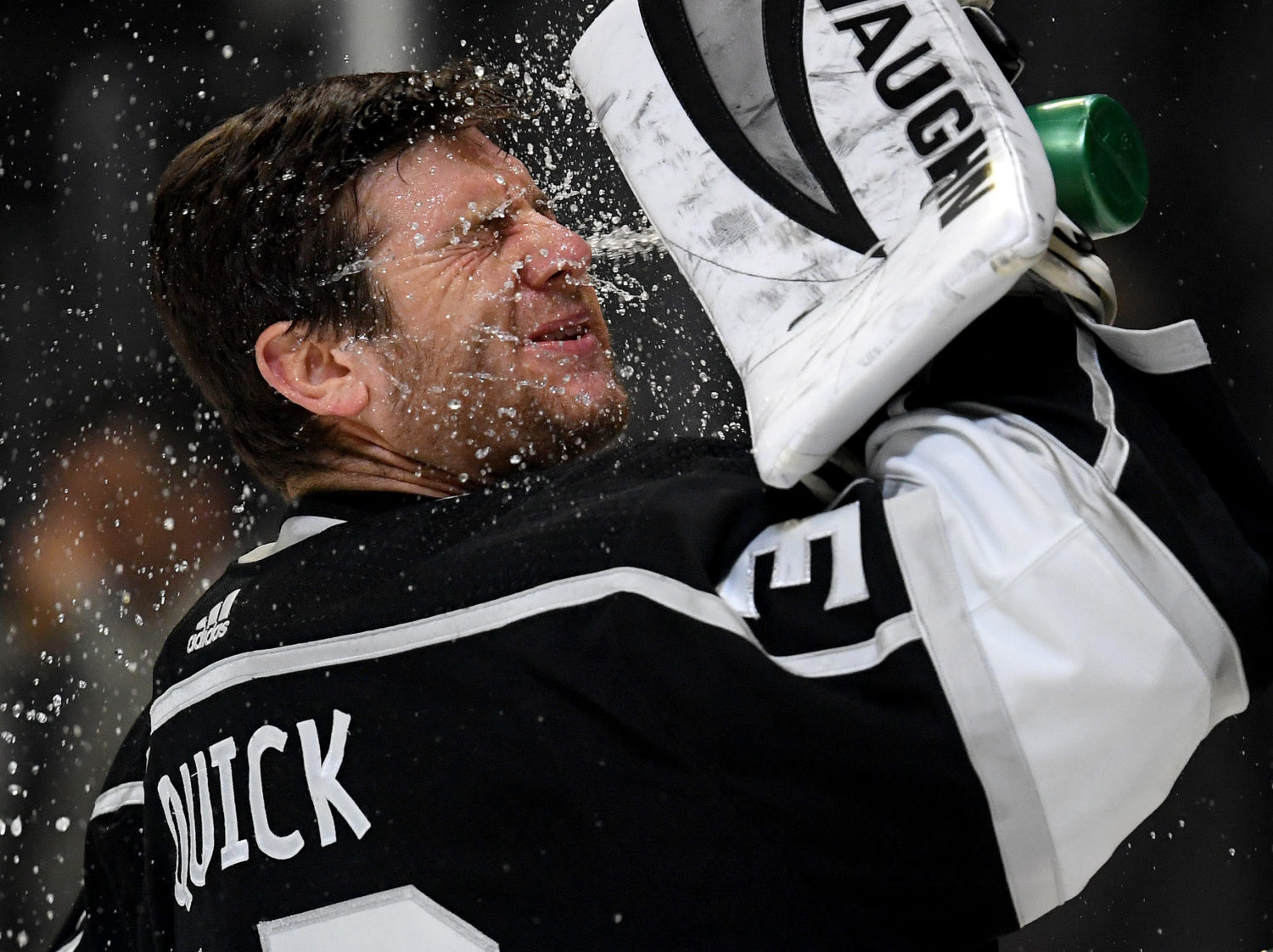