No longer “sneaking around the league,” nightly impact sought from accountable Kempe 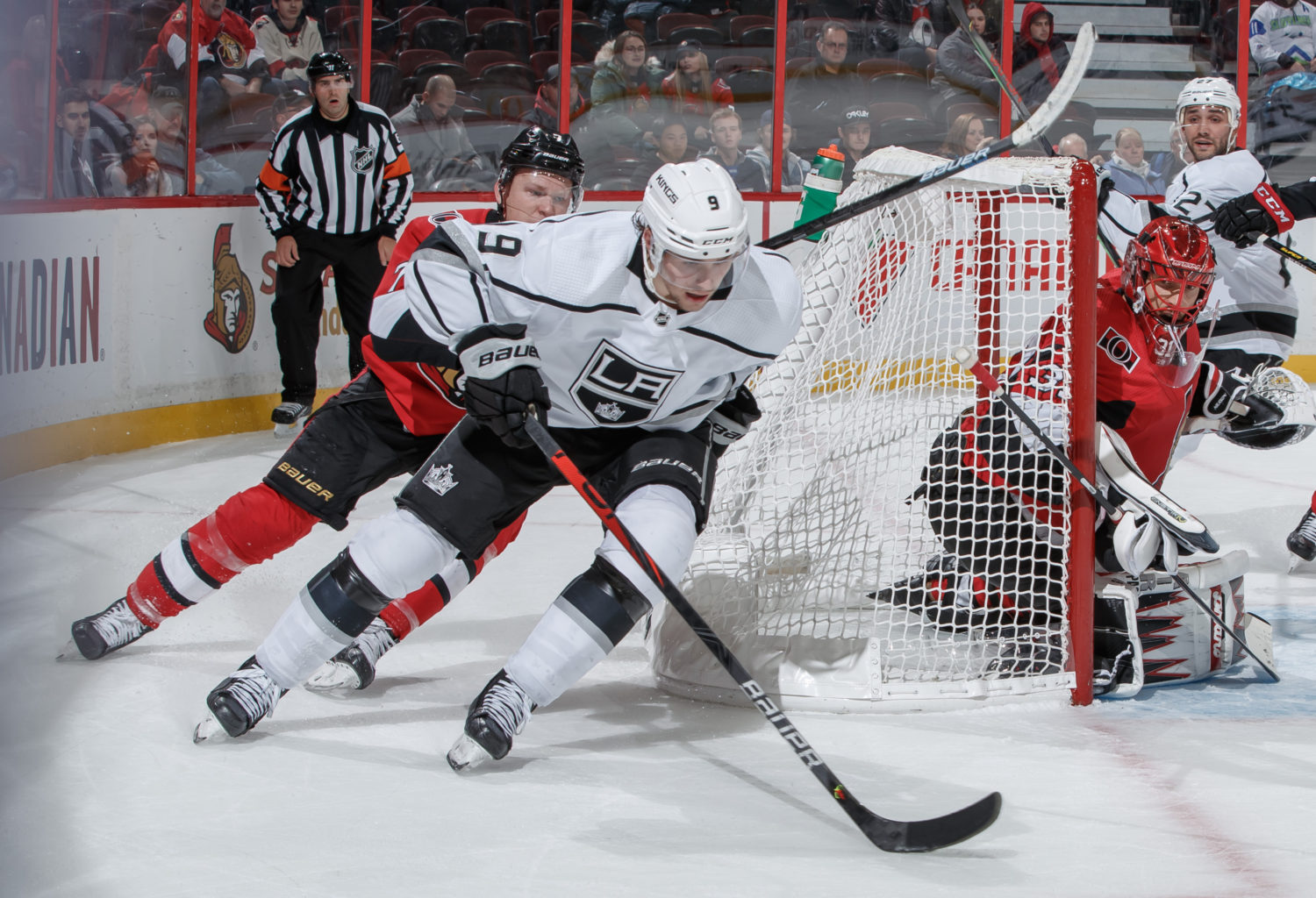 Adrian Kempe wasn’t mentioned by name after Saturday’s loss. Coaches don’t frequently go public with direct criticism of a player, and when they do, there’s usually a purpose behind it.

But when Todd McLellan broke down the importance of Montreal’s second goal and how such plays had been addressed in pre-game and pre-scouting meetings, he referenced a pivotal moment that went against the team when Kempe lost containment of Nate Thompson in front of the net, leading to a bang-bang goal off an Artturi Lehkonen feed only 15 seconds after Shea Weber had opened the scoring. McLellan referenced the goal again later in the extended scrum, telling reporters he was bothered by the play “because we had addressed it and we’re better than that.”

Such seems to be an accurate encapsulation of NHL coaching, especially one whose club is scuffling. You hold meetings, you hold video sessions, you build relationships with players, you put on skates and run drills repeatedly to instill detail and facilitate growth. And then in the fog of war, mistakes happen. For every goal scored in the National Hockey League, there also exists a mistake beyond the goalie’s. And for Kempe, perhaps there’s still a touch more reading and thinking than there is simply reacting at this time.

“I think sometimes you try to get locked in on the puck a little bit too much and maybe you lose a guy and maybe I think something else is going to happen out there and you try to think about that sometimes, and then you forget about other things,” he said.

Fortunately for McLellan, Kempe, who has one power play goal, four points and a minus-10 rating in 17 games is accountable, mature and has tough skin. It’s not only with the media, whom he always has time for, but also with the coaching staff and executives. He’s not a player who cuts corners. In fact, he was the first skater on the ice on Monday, and along with Ilya Kovalchuk (and his two sons), part of the final group to leave.

That’s not only anecdotal. He’s a rink rat, the son of Mikael Kempe, a former general manager, coach and developer in Swedish hockey who not only instilled toughness and responsibility in his game, but also the necessary enjoyment.

Via Curtis Zupke of the LA Times, from February, 2018:

“Many people who work for the newspaper in Sweden ask, ‘What have you done?’ I said, what I think I have given them [is] the passion for the game. Don’t play to be [well known]. Play because you love the game. And you if do that, in your heart, it will take you to the highest level you can be. You cannot say it. You have to feel it.”

Players aren’t simply responsible players because of a particular chosen profession within the family. “I don’t think it’s as easy to say that ‘the coach’s son this and that,’” McLellan said Monday. “He does take accountability for his play. I don’t think he’s been pleased with the results of his individual play, and certainly collectively, nobody’s happy. So, he takes responsibility, he’s working hard to improve in certain areas. Coaches, we have to hold him accountable for his actions, but we also have to find ways to get him out of it and to get him into a situation where he’s got a positive impact on the game nightly – not a streaky-type thing.” 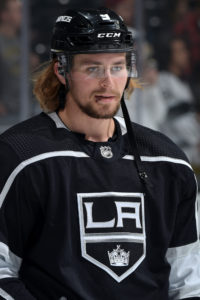 And so continues the work with the 29th overall pick in 2014 who scored 16 goals over his first 52 games as a center who helmed an effective second line as a 21-year-old rookie but did not score over the remaining 33 regular season or playoff games. Even so, his play away from the puck was much farther along than the typical rookie at that juncture.

“A lot of times I think young players come into the league and nobody knows who they are, so they get away with it a little bit early,” McLellan said Monday. “Everybody in the league knows who Adrian is now, and we’re playing him in a situation that he’s got a lot of responsibility put on him – often second line. He’s been on the power play, he’s been on the penalty kill, so he’s not sneaking around the league as you might when you first come in. So that comes into play, but also your own personal identity and what you can bring to the rink. We’re working hard with him in that area, too.”

He has appeared in 204 NHL games but took the second rotation at center on a four-person line Monday, which could suggest he’d be scratched Tuesday against Minnesota. Or, it could be some sort of alarm bell, similar to those sounded in the directions of Tyler Toffoli, who was scratched amidst an extended consecutive games played streak, or Ilya Kovalchuk, who dropped down the left side of the lineup on the recent trip but was still earning healthy minutes.

In any event, the message – which has accompanied meetings and direct lines of communication with McLellan – was received clearly by Kempe.

This isn’t the direction I was planning on going with Kempe, a terrific skater whose secondary metrics (though not his production) improved significantly year-over-year, a suggestion he’d be someone capable of an unforeseen offensive spike amidst the aggressive forecheck and reinforced north-south play under his new coach. In the preseason, I collected quotes for a story on how the new systems seemed to be designed to get the most out of his elite skating ability and responsible if developing play without the puck.

At that point, McLellan said that he wanted to gain a better understanding of how Kempe uses his terrific skating – “Are you skating on the outside and chasing everything, or are you on the inside and using the speed effectively for yourself and your teammates?” he asked rhetorically in September – but also wanted to see the 23-year-old forward make a regular impact, night in and night out, for both himself and his teammates. In doing so, he complimented Kempe’s “hockey mind” as well as his shot. “I see basically every tool you need in the box to have a real positive impact, and we want him to have more on a nightly basis,” he said.

That hasn’t happened yet this season. There have been promising flashes, such as the play that earned him an assist on Ben Hutton’s goal in Minnesota when he remained strong on a puck after facing Jared Spurgeon pressure upon entering the zone. He recorded a team-best seven power play shots on goal on that road trip, four alone in the Winnipeg game, and a team-best five individual scoring chances. But this is grasping at some stats to fit a narrative. On the whole, despite secondary individual metrics that put him roughly in the middle the pack of the 29th ranked power play, the eye test still lagged. On Saturday, he was replaced by Blake Lizotte on the top unit, an alignment used again at practice on Monday.

Kempe is a former power play whiz for Sweden’s national junior team and in the AHL, where he totaled 13 power play goals in 104 games with Ontario and Manchester. On the core aspects of the success at lower levels he’d like to carry over, it’s to keep his shooting volume up. He largely has done so on the man advantage, though on the left half wall, he’s also shooting across his body, which has led to attempts to pick corners on the short side.

“We’ve always been a shooting power play. That’s what you’ve got to do,” Kempe said. “I want to shoot as much as possible. I’ve been playing my off-side a little bit more. I don’t usually play it, so it’s a little different. But I’m just trying to keep getting pucks to the net.”

Kempe may sit for a game, he may not. It may perk some ears and eyes up around the league should that ultimately come to be. But even if calls may come in, I’ve always been of the impression that the team sees Kempe as a highly important asset who (as shared yesterday in WUWTK) builds the bridge between the experienced veterans and a much younger group that’s yet to reach half of Kempe’s 204 games. There is always a pressing impetus to always improve, but with a player like Kempe – who fills an important position where other options below Kopitar include Michael Amadio, a 23-year-old with 95 NHL games played, Blake Lizotte, a 21-year-old with 18, and Nikolai Prokhorkin, a 26-year-old with 2 – there aren’t a ton of options beyond one that requires patience and emphasizes the importance of getting it right at an important position.

“He‘s a young player when you look at age, he’s a young player when you look at the amount of games played,” McLellan said. “I only know him as I do know for two months, and I can listen to others’ opinions, and I have to now because it’s gone on long enough about the impact he can have on a game. What we’ve been waiting for is to see it. And the longer it goes, the harder it is for everyone. It is a long-term view, but he’s further into his career than Wags or Grundstrom or Lizotte or a lot of these other players. You want to think that he can grasp it and get through it quicker, but even some take longer.”

McLellan has had regular communications with Kempe, but a good portion of those conversations will stay between the coach and the player. Darryl Sutter once memorably said of a 20-year-old Tyler Toffoli that if he lacks consistency, shift-to-shift, “I’m not going to say, ‘you’re a bad boy.’ I’m just not going to play him.” It doesn’t require a regular wagging of the finger, but if a finger needs to be wagged, McLellan will do so with vigor. He tailors his message and the tone accompanying it through “their play, their attitude, their belief system – their effort will dictate where we go.”

“Are we going to make mistakes? Yes. Are those mistakes going to cost us games? Yes, and we’ve seen that a number of times. There’s been a few times this year where effort’s cost us games and naturally I’m going to react – or we, as a staff – are going to react differently to games like that. But it is a game of mistakes. We’re not the only team in the league that makes ‘em. Right now we’re making a few more than we can cover. There’s times to be patient, but there’s also times to growl and to be very direct, and I think we’ve been both. But there is not a magic wand. We’re still going to make mistakes, and we’re going to try and fix them as quickly as possible.”

Adrian Kempe, on any challenges deriving from playing for his fourth NHL coach in four seasons:
We have a similar team from last season going into this season, and obviously it takes some time to learn the new stuff and the way he wants to play. And the system’s been taking a little bit of time as well. You kind of want to get to know them … their different personalities, the guys who coach, and they want to learn how we are as well. It’s from both ways, I guess. 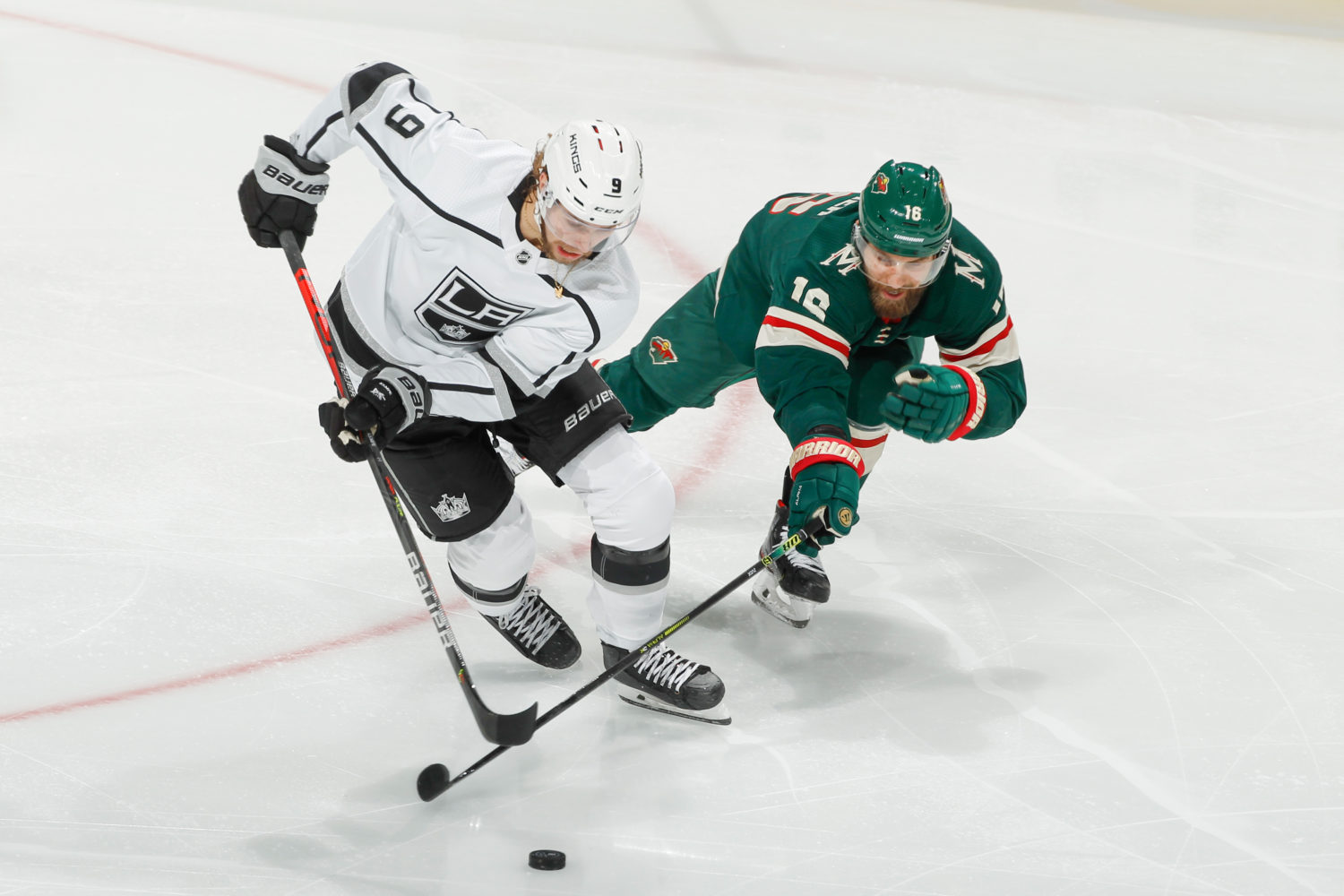