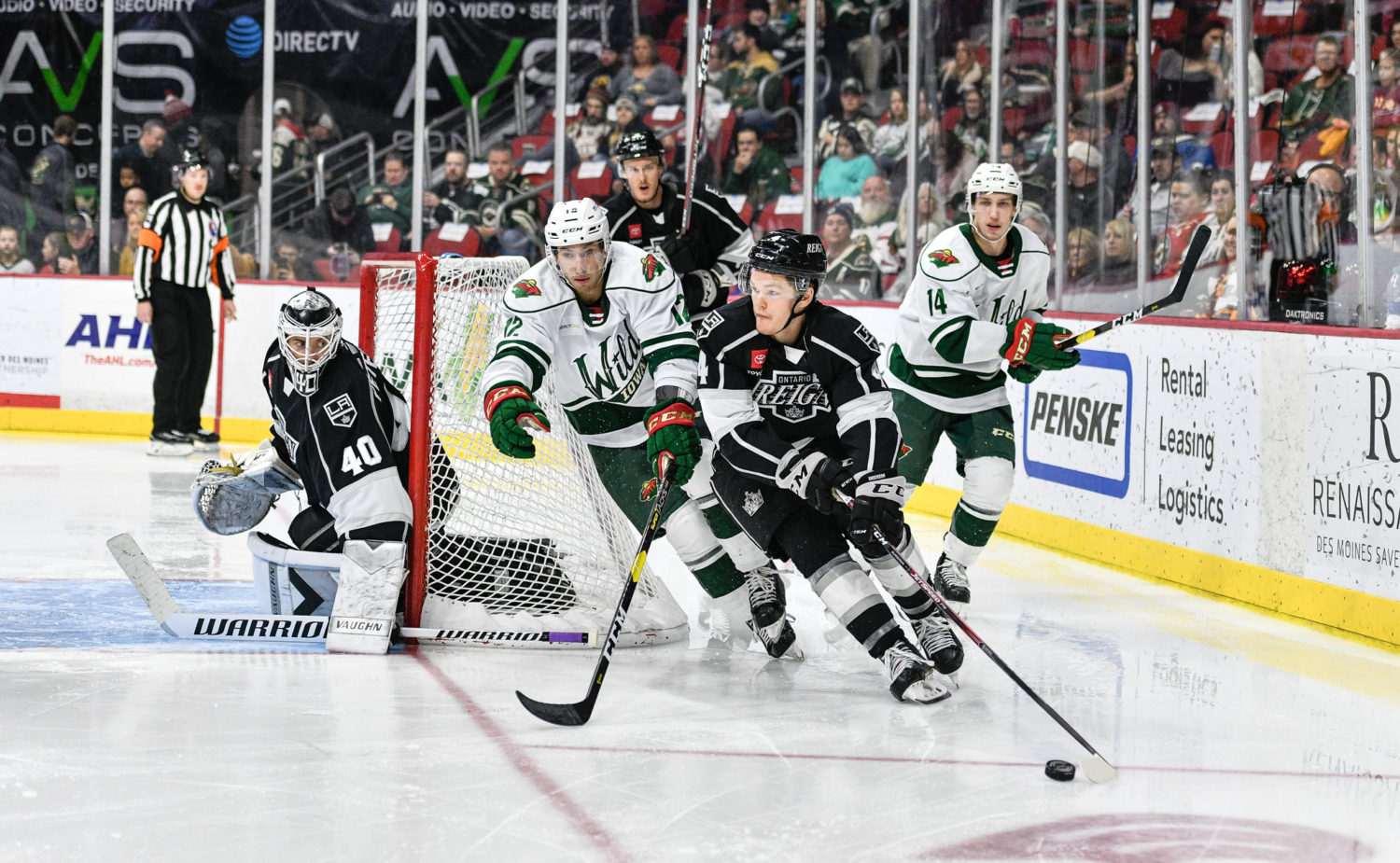 TONIGHT’S MATCHUP: The Reign and Wild are back in action for Round 2 tonight in Iowa. Ontario took the first game yesterday evening by a 3-2 final after a comeback victory in the third period.

WHAT TO WATCH FOR: With no morning skate before the afternoon matinee, Ontario’s lineup won’t be known until a little bit closer to puck drop. Reign forward Martin Frk and defenseman Ryan Stanton are both “day-to-day” and both players did not play yesterday evening. Forward Johan Sodergran was hit in the ear region by a puck in yesterday’s game, which caused him to head to the locker room for attention, but he returned to the bench later in the third period.

AUSTIN 3:16: With the Reign trailing by a pair of goals entering the final 20 minutes of regulation, defenseman Austin Strand tallied twice in the third period, with the game-tying and game-winning goals. Strand’s GWG game with just 2:31 remaining marked his third goal of the season, which leads all Ontario blueliners. Strand has totaled six points (3-3-6) and a +5 rating from 11 games played this season.

PAYING YOUR LaDUES: Ontario defenseman Paul LaDue scored his first goal of the season, a first period tally, which opened the scoring on Saturday evening. LaDue nearly had his first of the season a few weeks back in Bakersfield, though it was later changed to Carl Grundstrom. LaDue has amassed five points (1-4-5) from 12 games played this season with Ontario, and he is tied with Grundstrom and defenseman Tobias Bjornfot with a team-leading +8 rating.

ZERO DARK FORTY: Reign goaltender Cal Petersen turned in another strong performance, as he made 39 saves on 41 shots in a victory in his home state of Iowa. Petersen has posted an 8-3-2 record on the season as he’s started all 13 Ontario games to date. Petersen continues to lead the AHL in several categories, including wins, and has made 121 more saves than the next nearest goaltender, Manitoba’s Mikhail Berdin.

MARSHMELLOW LUFF: Ontario forward Matt Luff tallied the assist on Strand’s game-tying goal midway through the third period, his second consecutive game with an assist. Luff has now totaled seven assists on the season, tied with Mario Kempe, who assisted on the game-winning goal, for the Reign lead. Luff also hit a pair of posts last night, a trend for the third-year winger as of late, something he spoke about after last night’s game.

MY TWO CENT-RAL: Today’s matchup against Iowa is the final road game of the season for Ontario outside of the Pacific Division. After playing five Central Division foes (Grand Rapids, Iowa, Milwaukee, San Antonio, Texas), the Reign will only take on Iowa in the 2019-20 campaign, with four games in total outside of the Pacific Division. Ontario and Iowa will meet again in California in mid-December, with a pair of games at Toyota Arena.

SCOUTING THE WILD:Forward Gerald Mayhew scored yesterday evening for Iowa, his team-leading seventh goal of the season, which ties him for ninth across the AHL. Mayhew’s 11 points also paces the Wild in total scoring. With an assist in the defeat, forward Sam Anas tallied his seventh helper of the season, second best on the Iowa roster. In net, goaltender Kaapo Kahkonen lost for just the second time on the season, and is still tied for second in the AHL with six wins.