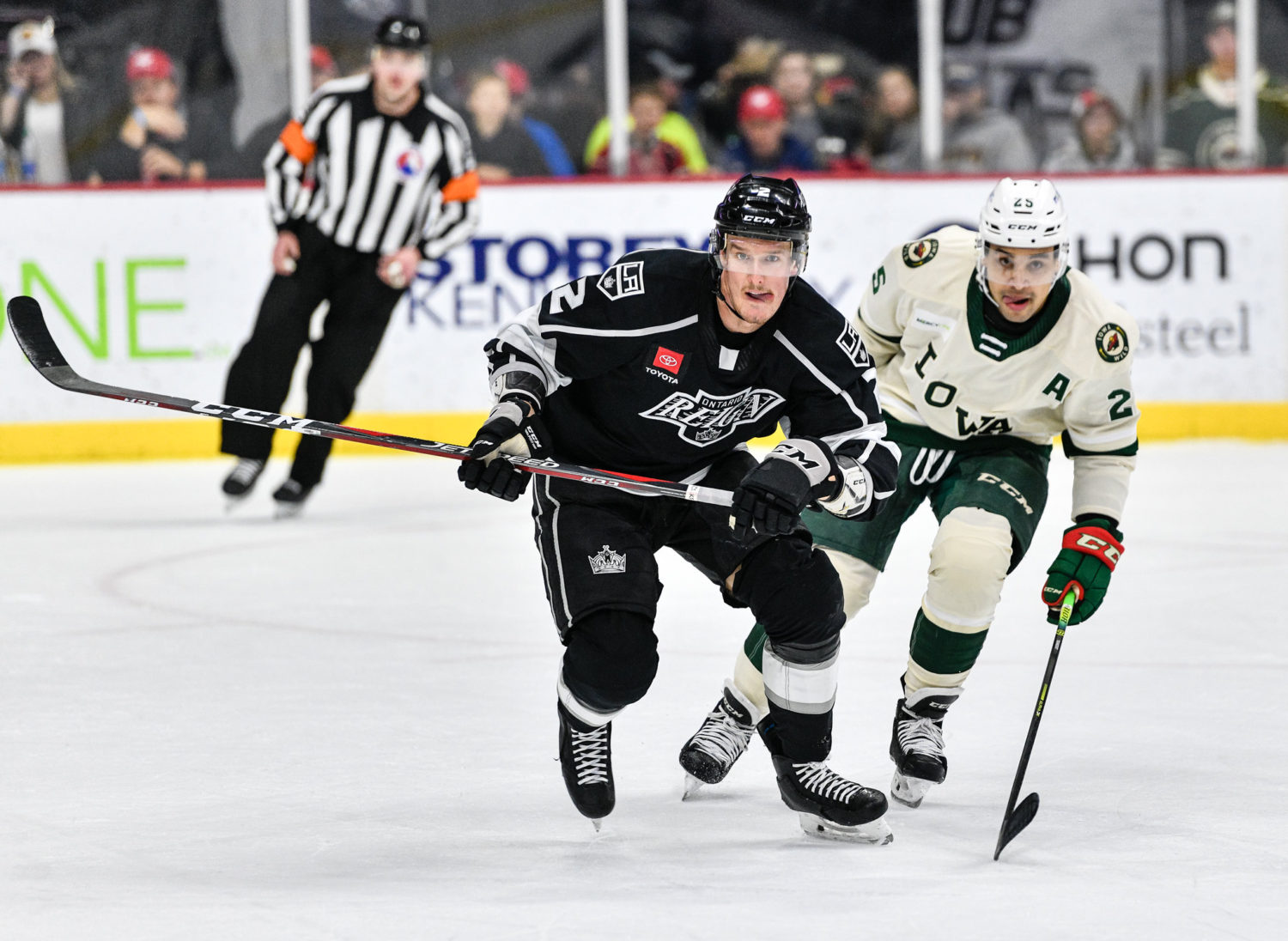 The Ontario Reign’s power play was a “power outage” in the words of Head Coach Mike Stothers. Ontario went 0-of-7 on the power play this evening, which included a 75-second 5-on-3 opportunity, as the Reign dropped the finale of their four-game road trip by a 3-0 margin in Iowa.

Ontario was unable to get things going up a man, as it struggled to gain entry into the offensive end and when it did, there was a challenge to get things setup and create good looks. The Reign did create a few chances on their two-man advantage, but those are situations where a goal was needed but did not come. It can be said that the penalty kill on the other end of the ice was one of the AHL’s finest – Iowa entered today’s action at 92.2% on the penalty kill, tied for third in the league, with tonight’s effort bringing them into second at 93.4%, but the Reign were more focused on their own shortcomings on the power play than their opposition’s strengths.

Added on top of the struggles to score while up a man was Iowa scoring a shorthanded goal, the first that Ontario has allowed this season. Gerald Mayhew, who scored last night on the power play and has five goals from six games against the Reign over the past two seasons, scored a shorthanded goal on a 2-on-1 rush to push the Wild lead to 3-0. The Reign also conceded a 2-on-0 rush while on the power play, which saw J.T. Brown miss high on the glove side.

Ontario will dwell on missed opportunities on the power play, as it heads home at 2-2-0 on their four-game road trip, the longest travel of the season. The Reign can poke at positives – such as a 7-of-7 effort of their own on the penalty kill, against a unit that essentially struck twice against them less than 24 hours ago – and walk away from four tough games at .500. Additionally, Cal Petersen made 39 saves on 42 shots faced, as he maintains his strong statline through now 14 games.

The Reign will have a couple of days off before returning to the ice on Wednesday at Toyota Sports Performance Center in El Segundo. Ontario has two practice days before it returns to game action on Friday and Saturday with a home-and-home against San Diego, beginning at Toyota Arena on Friday evening.

Mikey Anderson on what was different this afternoon as opposed to last night’s win
I think we came into this one slow from the start. Obviously, we were down three, but we didn’t play the way we needed to right from the start. We didn’t show up ready to play at 3 o’clock and they did. That’s kind of how everything started and it never got better.

On the Reign’s struggles on the power play this afternoon
As a whole, we’ve got to stick to what made us successful at the start of the year. Mods gives us the plan and when we get away from that, it tends to go like tonight. As we go forward, we’ve got to look at what we did tonight and listen to Mods, do what he’s saying and that will bring us success.

On creating more consistency in performances from game-to-game
Like you said, it’s happened a couple of times now, so it’s learning from it. It’s still pretty early in the season, but it can’t happen every other game or couple games, it has to be a consistent effort like you said. I think we’ve got to look at what we did yesterday and compare that to what we did today and learn from it. It can’t keep happening as the year goes on.

Mike Stothers on building a more consistent effort and identity
I didn’t think there was any problem with the way we started the game. We got a couple of power plays, and our power play was far from a power play, it was a power outage. It sucked the life out of us, it didn’t do anything to their team. We got scored on shorthanded, we gave up a 2-on-0 shorthanded, that’s the thing that took the energy out of us. We started having frustration with simple breakouts, execution of plays and getting it into the zone and refusing to shoot, then shooting it into players. That was the different in the game.

On if the power-play problems are on zone entries, in-zone setup, something else or all of the above
Tonight, it was pretty much everything. We didn’t carry the puck up the ice wisely, we didn’t run our routes properly, we didn’t execute. We got into the zone, we were sloppy, we were guilty of hanging onto the puck, we put ourselves on the perimeter. We had guys in front and we finally get a shot through and we move out of the way of the front and most importantly, we lost faceoffs. We’ve got a 5-on-3, o-zone faceoff, you lose the draw clean and they put the puck 200 feet. That’s a cardinal sin, you can’t do that, so that’s why I say there was no power play tonight. There was a power outage.

On the struggles of getting into a flow in the game with seven PP’s per side
They had seven power plays, we had seven power plays, so there was a lot of special teams involved it’s hard to get everybody going. It’s hard to get the lines filing over the boards. Again, if we convert on a couple of those power plays early then it’s a different game. Maybe, with a big emotional win last night, their team looks at it and goes “oh boy it’s going to be a long night.” They killed off their part and they got some life, but the other side of it is they had seven opportunities and we killed those off, so it should have been an even battle when you get right down to it. We’ve got to take advantage of our special teams. We can’t get scored on and we can’t give up a 2-on-0 [on the power play].

On the bright spot of killing all seven Iowa power-play chances
Yeah, that’s a good power play. They got a couple last night so the guys did a good job of shutting things down, guys blocked a lot of shots. Austin Strand might’ve led our team in shot blocks tonight, sacrificed his body. There’s always a positive you can find in anything, Dools. You can lament the loss and the fact that we didn’t score a goal and we didn’t score on our power play, but if you want to find some positives, our penalty kill was good. Guys were sacrificing themselves and trying to make plays in that area. It’s just a matter of getting both going on the same night.