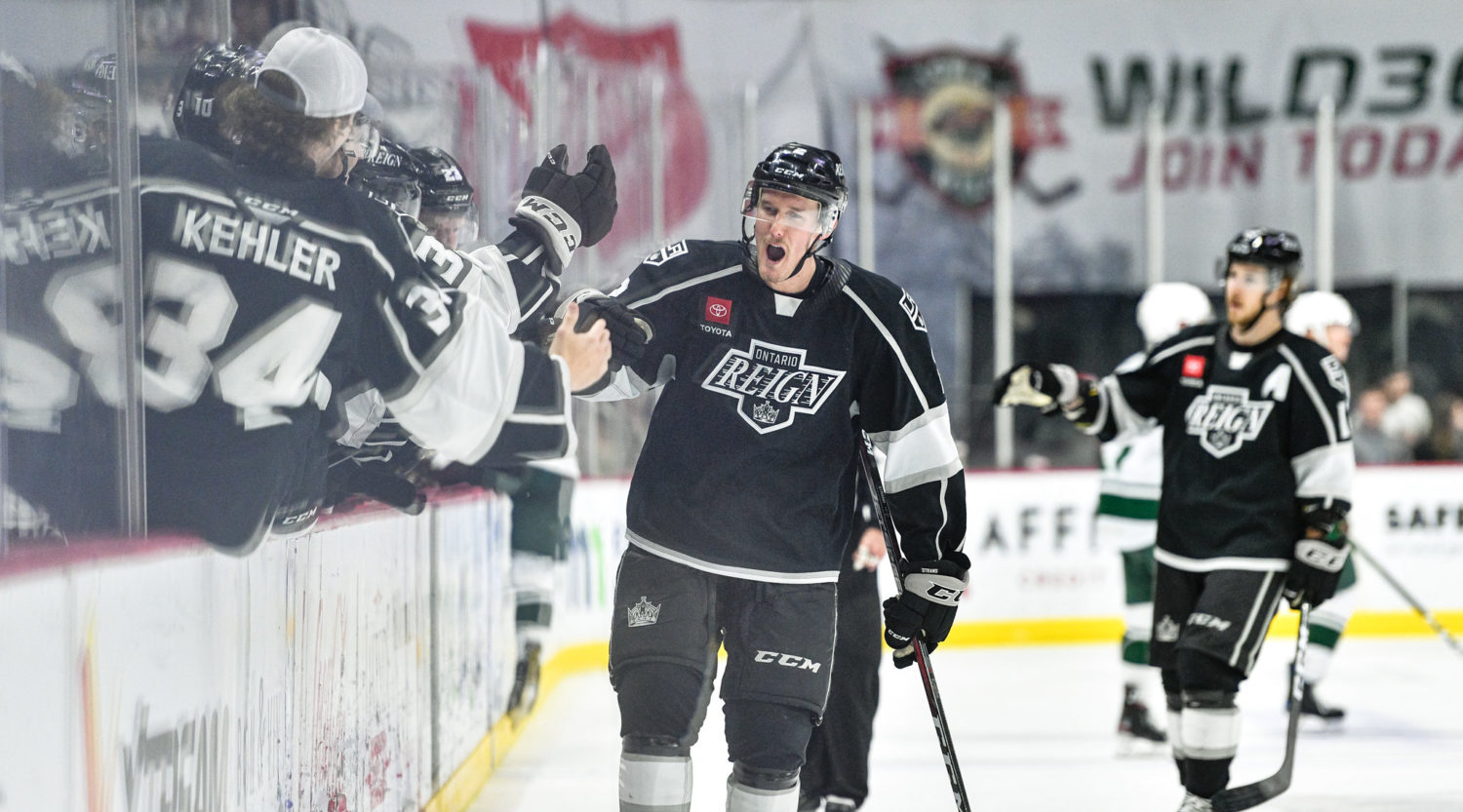 Faced with a 2-1 deficit heading into the third period, the Ontario Reign just kept working. Two goals from Austin Strand later, and the Reign came from behind to beat the top team in the Central Division, the Iowa Wild, by a 3-2 final.

It was a showing of resilience by the Reign, who were outplayed at times in the first 40 minutes but played one of their best periods of the season in the third, as they scored twice and shutdown the Iowa offense when they needed to. With 6:30 on the clock, Iowa had 39 shots on goal on the scoreboard. With 25 seconds left on the clock in the third, as Iowa took its timeout with an offensive zone faceoff upcoming, the Wild had 39 shots on goal. The Reign were efficient and hardworking defensively down the stretch in the third period, completely turning the game around in the victory.

Credit has to go out to Austin Strand, who responded to two games as a healthy scratch and returned to the lineup with a goal on Wednesday and two huge goals tonight. Strand has worked hard to improve his game and getting shots through from the point – he got two through tonight at the right time.

Credit to Matt Luff for his assist on Strand’s game-tying goal and creating chances throughout the evening, including a pair of posts in the second period. Credit to Lance Bouma, who selflessly blocked a shot with five seconds left in the game to preserve the win. And credit to Cal Petersen, who was his usual self as he earned a victory in his home state of Iowa with 39 saves on 41 shots.

Ontario and Iowa will go at it again tomorrow afternoon in Iowa, 3 PM local time, 1 PM Pacific, as the Reign look to complete the sweep against the Central Division’s top team entering tonight’s action.

Injury Update
– Martin Frk missed today with a “mid-body” injury, and is considered day-to-day.
– Johan Sodergran took a puck to the “melon” in the third period tonight, as Bouma’s clearing attempt went onto the Reign bench. Sodergran left the bench for a bit but returned and finished the game. The puck got him in the ear region, but he’s expected to be fine.

Matt Luff on the Reign’s effort and never quit mentality
I think we believe in each and every guy that goes on the ice and that’s a big thing. Line 1 to Line 4, it doesn’t matter who’s out there. You look at Boko, Rymmer and Dots, or Boomer, they’re physical, they got in their guys’ heads and they created chances for us too, so that always helps. At the end of the day, Strander with two big goals and another great night by Cal. Going into games, down goals or up goals, I think we believe in each other to close games down and win games.

On playing on different lines throughout the game
Yeah, I mean I don’t really care who I play with, everyone’s here for a reason. It’s pro hockey, everyone’s got great skill and works hard. It doesn’t, I mean it doesn’t matter how many times I’m put out on the ice, I’m going to work hard with whoever I’m with. It’s a win and I’ll keep playing as many minutes as [Stutts] wants and do whatever he wants.

On hitting two posts on the PP and the Reign’s overall special teams play
At the end of the day, we gave up two PK goals, which is tough, and I don’t think we got any on the power play today. You’ve got to look at that and that’s not good enough. You’re out there for a reason and you’ve got to shut them down or put one in the back of the net. I think, at this time, it’s kind of frustrating hitting this many posts in the past six or so games, but at one point they’re going to go in and I won’t be complaining then. Right now, it’s just focusing on perfection on both sides of the puck.

Mike Stothers on the team’s effort tonight and ability to keep fighting
I couldn’t be more proud of the guys tonight. I mean, that was a hard-fought hockey game from start to finish, two really good teams. You can see why Iowa has the record they had coming into the game tonight, it’s a tough building to play in. They have a little bit of everything, they’ve got some speed, they’ve got some skill, they’ve got some toughness, they certainly finish all of their checks and you know what, their goalie is good. They make you work for every inch of the ice and I thought our guys battled right from the start. I thought it was a great team effort, from Cal on out.

On holding Iowa without a shot on goal for a 6+ minute span down the stretch, and the overall defensive effort
It’s been a bit of a process for the guys, we’ve got some young players, let’s not kid ourselves. We’ve got some young guys that are still kind of feeling their way around the league, especially on our backend. We didn’t even have Stanton in the lineup tonight, and that’s your most veteran presence, so we’ve got some young guys but they really battled hard. They were responsible for their positioning and making sure that they weren’t losing assignments or coverage and our forwards have to help out too. I thought our forwards did a real good job of supporting our D. Cal played the puck real well tonight, he’s actually getting really good with puckhandling, so we might choose him as one of the guys for the shootout, if we ever get to that. He’s helping move the puck along and he’s reading whether we can go directly to the D, or we bypass the D to go to the forwards to get out of the zone. It’s nice to see, Zach. I’m trying not to get too excited about our club, because, again, with the inexperience we have, it’s one of those things where we’ve got to get that consistency, right? We’ll see what happens tomorrow at three o’clock.

On Rasmus Kupari’s game since they met in late-October
There’s a lot of things that I’m happy with, with Kopi. I like to call him Kopi 2.0, so that’s a pretty lofty compliment to him, but he’s been doing a lot of things well for us. He’s getting stronger on his faceoffs, which is great. I think he’s hit the post numerous times, which don’t register as shots on goal, but at least he’s putting some pucks to the net, he’s making some plays and he’s actually doing a good job with supporting the middle of the ice for us as a centerman and it’s not always the centerman’s responsibility. When we go back on a breakout, he’s always supporting the D, he’s there, he’s available for them in the middle of the ice, he’s doing a good job. I think it’s just a matter of him feeling a little bit more comfortable and getting used to the size of the rink and how congested things can become and we’ve seen some real good bursts of speed out of him as well. I think his game is coming along and he’s doing a lot of things well.

On Lance Bouma’s late-game block and what he brings to the Reign lineup
He proved there why he’s a complete pro. He sacrificed his body and I think it was two shots he blocked there at the end. That’s what you do to preserve a win. You know it’s going to hurt, you know it’s going to sting, but he didn’t want to let his teammates down and that’s why we’ve got some good veteran leadership. It’s a good example for the younger guys of what it takes to not only become an NHL players, but he’s got aspirations of getting back to the NHL, so he’s going to do anything he can to help the team and that was terrific tonight.