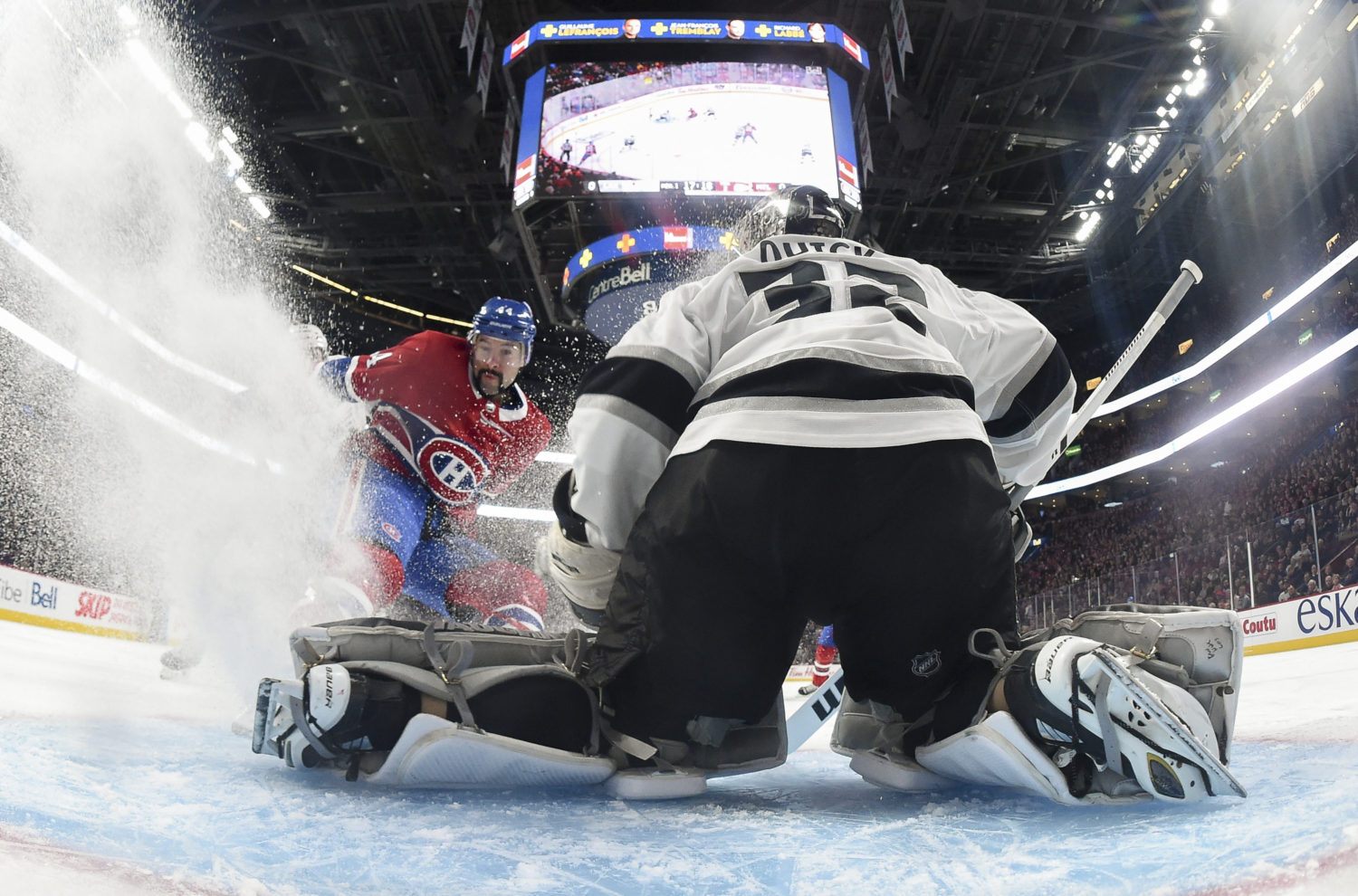 Todd McLellan, on Blake Lizotte’s line earning time late in the game:
Well, they deserved to be out there. I thought they were our most effective line. They played the right way, they played consistently most of the night and they deserved to be there, so it was an easy decision on our behalf. There were some others that maybe would normally be out there, but they didn’t have as big of an impact on the game as those three did, so reward for them.

McLellan, on what Montreal did well:
Well, the second goal was the one that I think really hurt us. You look at the first, it was a skilled play by Shea. He’s that good a player, he can do it. There’s not much we could do about that one. The second one really hurt us. We were still there for a little bit and in the game, and it was something we addressed in the pre-game, the pre-scout, and it was an error that was very costly. And then after that, we took a few too many penalties that took us out of any type of a forecheck element, but yet we fought with it and stuck with it. Still short, though. We’ve got to find a way to end up on the right side.

McLellan, on opening the second period with a good push:
We needed to decide individually and collectively how the rest of the night was going to go. It was the message to the players. It wasn’t anything about adjusting or changing the forecheck or doing anything technically. It was a decision we had to make individually, and then collectively how they wanted the next 40 minutes to go, and they chose the right path. Still, we’re playing against a really good team. They get in the way, and I thought they took some momentum back in the third. Again, we’re close, but close doesn’t get you wins, and we’re looking for a few right now.

McLellan, on the role veterans have played in reinforcing the message, mid-game:
I think it’s two-fold. During the game it’s their actions that show everybody else the direction that they want the team to go. So, if they’re committed to doing things right and pushing the team and making everybody follow, then they’re doing it the right way. They’re still going to make mistakes, they’re not perfect. In the locker room they have to carry themselves with some confidence, which they do, both of those players. They’re often saying the right things, and the way they carried their shoulders and their heads. We haven’t won as many games, obviously, as we’ve lost, and they have to hold their heads up when they know they’re playing well and show confidence in the group.

McLellan, on whether the team gained momentum from killing the Kyle Clifford double-minor:
Well, it certainly could’ve gone the other way had we not, because the game was teetering right there. It was a good kill, Quickie made some good saves. Found a way to get out of it, and then I thought we settled in and started to play the way we needed to play. It had an impact on t he game.

McLellan, on Jonathan Quick’s save on Tomas Tatar:
It was an incredible save. Pretty simple answer – an incredible save, very quick legs. Having been out west for my whole career, I’ve seen that many times, so it’s not unexpected from him.

McLellan, on whether this was a game the Kings could “build on”:
I think it can. Every night we seem to find out a little bit more about our group. I think we found a lne that plays with a lot of energy and passion tonight, but when we’re doing that we often lose a player or two, so we’ve just got to find some consistency. Keep players in the upper-lvevel of their own individual games so that we can collectively have a little more success.

McLellan, on Blake Lizotte finding his game:
Blake has been fine all year. I do believe that the schedule played a factor in his tenacity. I thought there’s a little bit of a fatigue factor. He never played that many games against men like that. What are we, seven out of nine on the road? So that plays a factor, but tonight he had his legs, he had his tenacity, and I thought the two around him had the same qualities, so it was a good line.

McLellan, on his discussion with the officials after Clifford’s double-minor:
In my opinion, and obviously my opinion didn’t count for very much, I thought Clifford was attempting a backhand and he had a follow-through. Obviously, I didn’t count, so I guess it doesn’t matter.

McLellan, on Matt Roy’s two saves on Shea Weber:
Matt Roy’s done that a lot for us this year. After the first two games of the season, he’s settled in and played extremely well. To put his body in front of a shot like that, incredinble, but again, Shea has that talent to knock it out of the air and get some velocity on it again. Give him that goal. Not much we could do about it. It was the second one, as I said earlier, that really bothers me because we had addressed it and we’re better than that.

Anze Kopitar, on the influence “special teams” played in the loss:
I wouldn’t say necessarily ‘special teams.’ It was just our start in general. The first period, it was a sloppy period and you can’t spot a team three goals. We had a good second, a good third, but we’ve talked about this enough so far. I mean, it’s been 16 games in, you can’t play 40 minutes or 45 or 55. You’ve got to play the full 60.

Kopitar, on where the needle moved forward in the loss:
If we’re talking second and third period, I thought it was good. We were making plays, we were sharp, we were passing the puck the way we’re supposed to pass. That’s why the game was faster than it was in the first.

Blake Lizotte, on the excitement of scoring his first NHL goal:
I don’t know if it’s ‘excitement’ or if it’s just ‘raw emotion.’ I’ve been dreaming about that one for a while here now, especially this year. I’ve had some good chances and they haven’t gone my way, but it feels really good to get that first one in.

Lizotte, on the set-up for his goal:
Wags made a good shot, Grundy actually made a good play out of the corner to get it to Wags, and Wags threw it on net and it just happened to just be in the air, and I was waiting there for it to get below the crossbar and just got it on the heel of my stick. It happened to go in, so it feels good.

Lizotte, on providing energy:
I’ve felt good for the most part. I think we’re 17 games in now. I’ve felt good for the majority of the games, and I feel I can bring that to the table every night and do well, so I try and bring that energy every night. Today was definitely a good night for my line. I think Carl Grundstrom and Austin Wagner played really well tonight as well. They had their legs. I thought we worked really well together tonight.

Lizotte, on his line’s chemistry:
Wags and I obviously play with speed, and Grundy’s not slow by any means. He’s a big playmaker. I absolutely love playing with him. He’s hard in the corner, he wins a lot of battles. All you can ask out of someone is just to work hard, right? Whether you make a play or not doesn’t matter to me. Obviously, I want to make plays, but if you’re working hard and you make amistaek, so be it, and I think Carl has just fit really well with Wags and I, and that kind of showed tonight.

Lizotte, on the feeling of scoring his first goal:
Yeah, I was pretty caught up in the game, to be honest, as you’d expect. I wanted to tie that one up. Kind of disappointing not to be able to- [Reporter: You had a look there.] Yeah, and I missed the net. I need to take onus on that. I need to hit the net. I had a grade-A chance at that time of the game. You need to bury that. I’m sure it’ll hit me soon here. It feels good to get that first one, for sure. [Reporter: And Wags fishing it out for you, that’s very cool.] Yeah, him and I get along really well. He was just as pum[ped for me as any guy was.

Lizotte, on the heritage of his last name:
On that side, it’s German and French. I’m not sure- [Reporter: It goes back a long way.] Yeah, yeah. So, French side, and actually, I’m 50% Finnish, so I probably know my Finnish heritage more than my French. But, yeah I do have some French.

— With the loss, Los Angeles fell to 35-92-21 all-time against Montreal, a record that includes a road mark of 12-51-11. The Kings fell to 4-3-0 in their last seven road games in the series. These teams have one game remaining, March 17 at Staples Center.

— Shea Weber’s first goal ended Jonathan Quick’s personal shutout streak of 130:36 at Bell Centre. Between a Saku Koivu goal with 23 seconds remaining in a 4-3 loss on January 31, 2009, and Weber’s first goal, Quick had recorded shutouts in the 2015-16 and 2017-18 seasons in his other two appearances in Montreal prior to Saturday’s game.

Sunday, November 10 is a scheduled off-day for the team. Should the schedule change, it will be reflected upon the team’s arrival in Los Angeles.