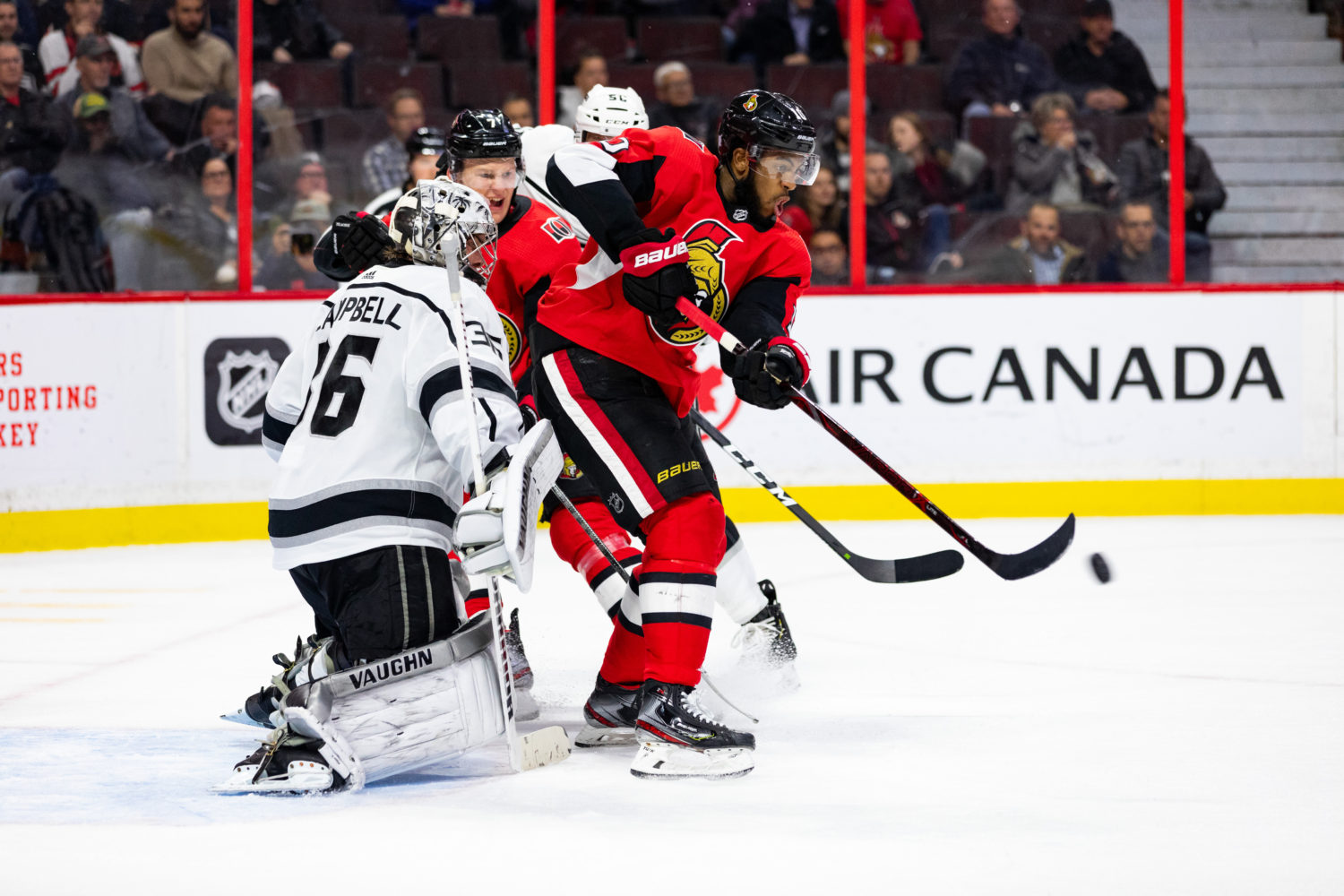 On the outskirts of Montreal, at about 1:15 a.m., while in our vintage parlour car that a half-century ago doubled as the smoking lounge on long-distance trains through the Rockies, the conversation drifted towards the greatest sporting event any of us had ever attended. A strong argument was made for the Indianapolis 500. What about Wimbledon? The USC-Texas Rose Bowl? In the end, there was little dissent. It was Thursday’s Kings-Senators game at Canadian Tire Center. 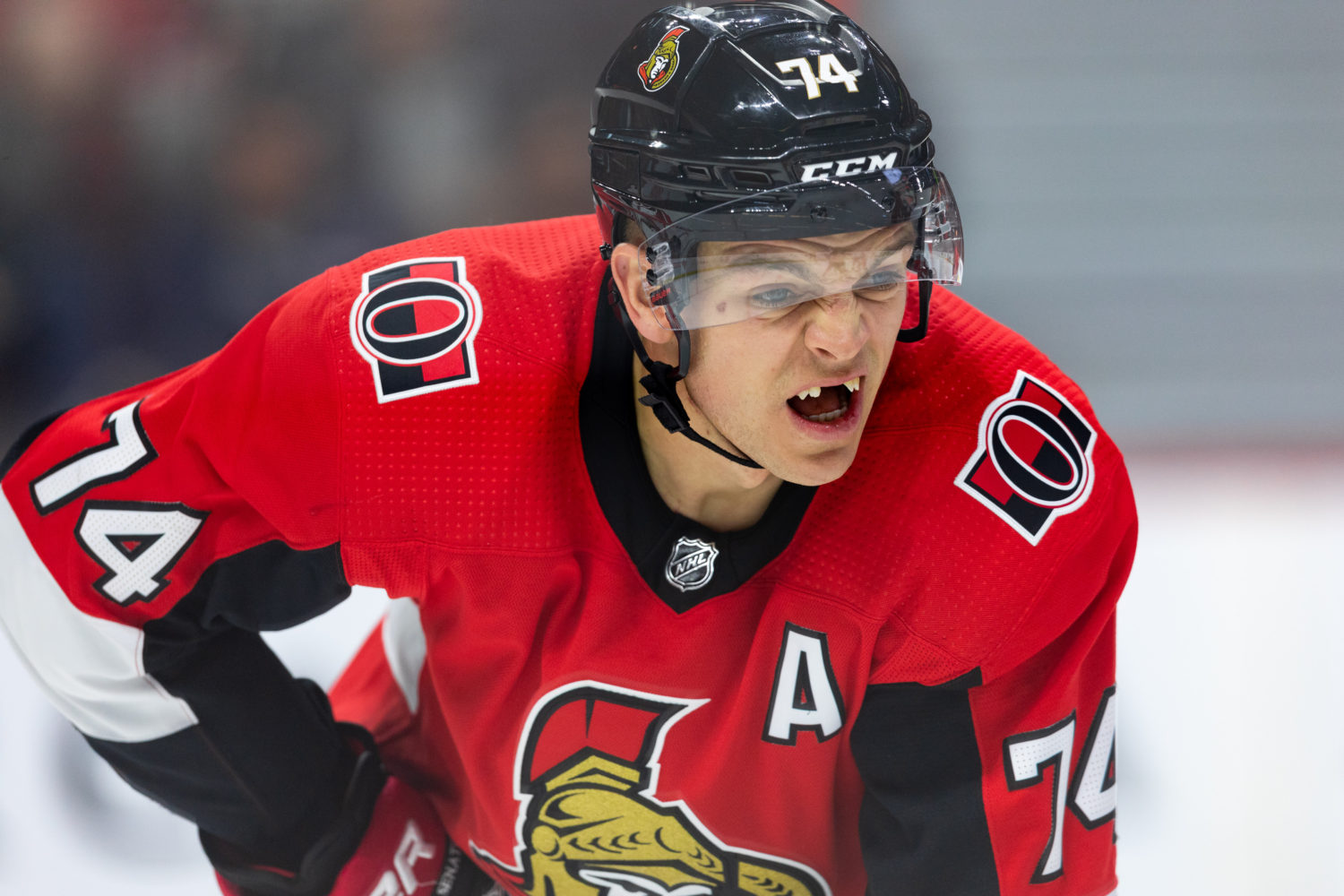 Single points need context, and this single point, absent of some five-game winning streak, isn’t very good. The LA Kings need wins and they need improvement, they need momentum and juju. They didn’t receive any great deal of that on Thursday. Maybe the needle moved forward in some areas, but I’m not quite sure what we learned about this team that we hadn’t sensed yet. When their forecheck wanes, they will get pushed back to the degree that they did in the second period and in moments of the third in which chipped pucks off the glass and lobs out of the zone were necessitated because they were getting cycled and hemmed in by a feisty team in a heavy game. Especially in the middle period, the Senators were winning most of the short-radius battles and demonstrating their strong work ethic, while the Kings were still in react-and-chase mode. There were gaps in coverage by both centers and wings that were mostly snuffed out by Jack Campbell as the last line of defense, while the dearth of playmaking and finishing ability has led to a 125-minute stretch in which they’ve recorded only one five-on-five goal. 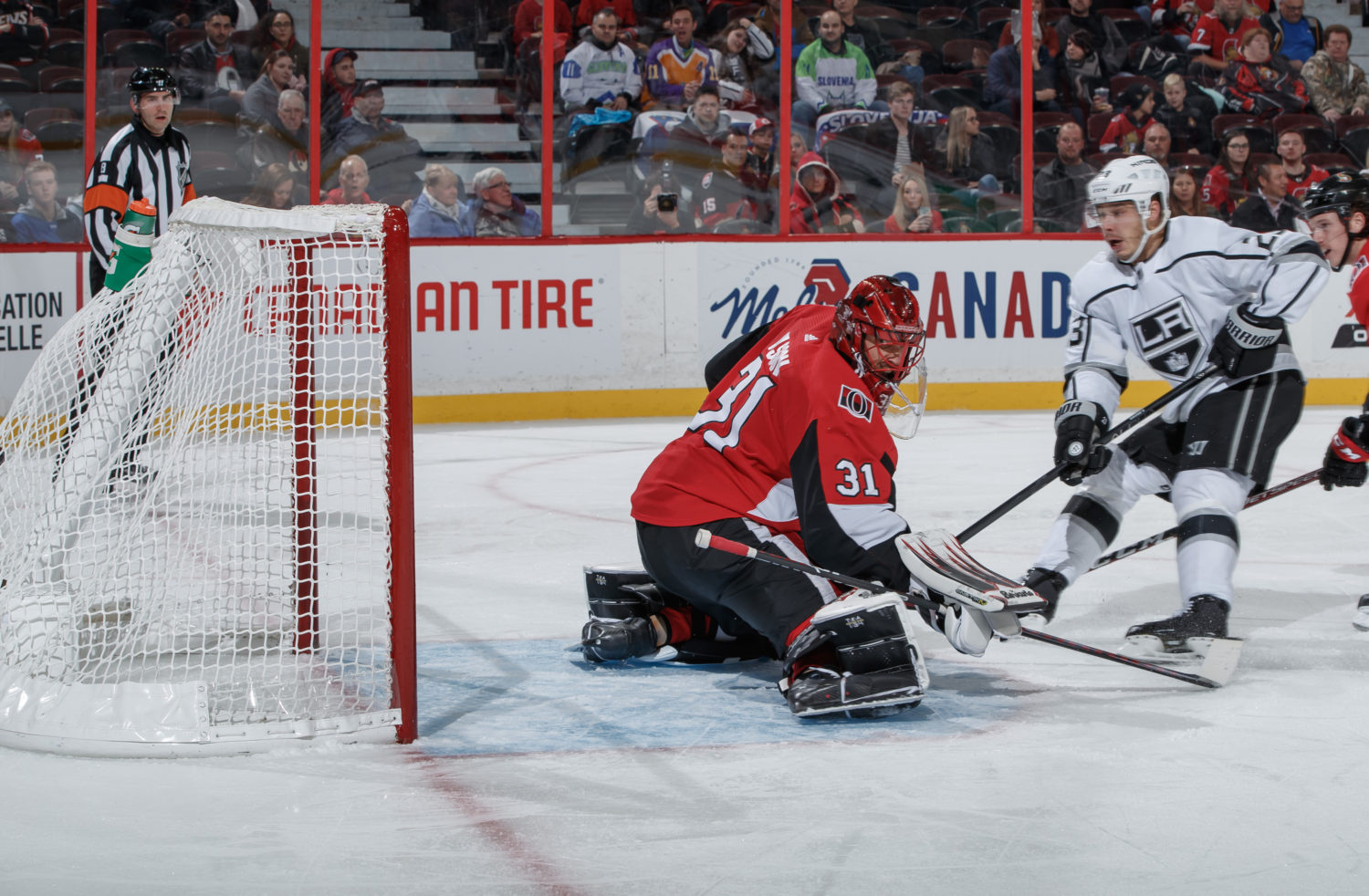 Neither Adrian Kempe (13:12 5×5 TOI) nor Blake Lizotte (11:01 TOI), their second and third-line centers, have scored a five-on-five goal this season. There are a number of intriguing and versatile young centers at all levels of the organization. There’s Jaret Anderson-Dolan and Gabriel Vilardi with Ontario, the latter an uncertain commodity at this exact point. Rasmus Kupari is also with the Reign but is probably a touch more likely than the other two to ultimately be moved to wing. Akil Thomas can play center or wing and will permanently join the pro ranks at the end of his junior season. There’s Alex Turcotte, very much a center. But JAD, Gabe, Rasmus, Akil and Alex don’t exactly put the Triscuit crackers in our stomach, so to speak. Those players currently in Ontario aren’t going to be rushed. In the decision between “should the Kings recall their young prospects to fill holes” and “should the Kings remain patient and keep these players in Ontario,” they’re going to align more closely to the Reign option. They want these players developing chemistry and amassing games together, and while injury and potential roster turnover may require some juggling, I’m not expecting to see any real opportunities towards more permanent breakthroughs take place until after Christmas. We’re all kind of expecting them to really give a good, extended look at those young-to-young-ish players – anywhere from the MacDermids and Roys to Kempes and Amadios – in a wide swath of situations, mostly without kid gloves. Prior to Trevor Lewis’ injury, and for a while after it, Austin Wagner played a second line role. His third period off-target pass that nearly sprung Ilya Kovalchuk loose on a breakaway was a misfire. So it goes until he eventually makes that pass or loses a position battle to someone who does – and that’s not to single out a second-year depth skater when issues obviously run deeper. But before that next, younger wave crests, coaches and executives are in the midst of an important time in which they’re trying to accurately parse and evaluate which assets of this current group can be reliable players for them beyond the 2019-20 season. 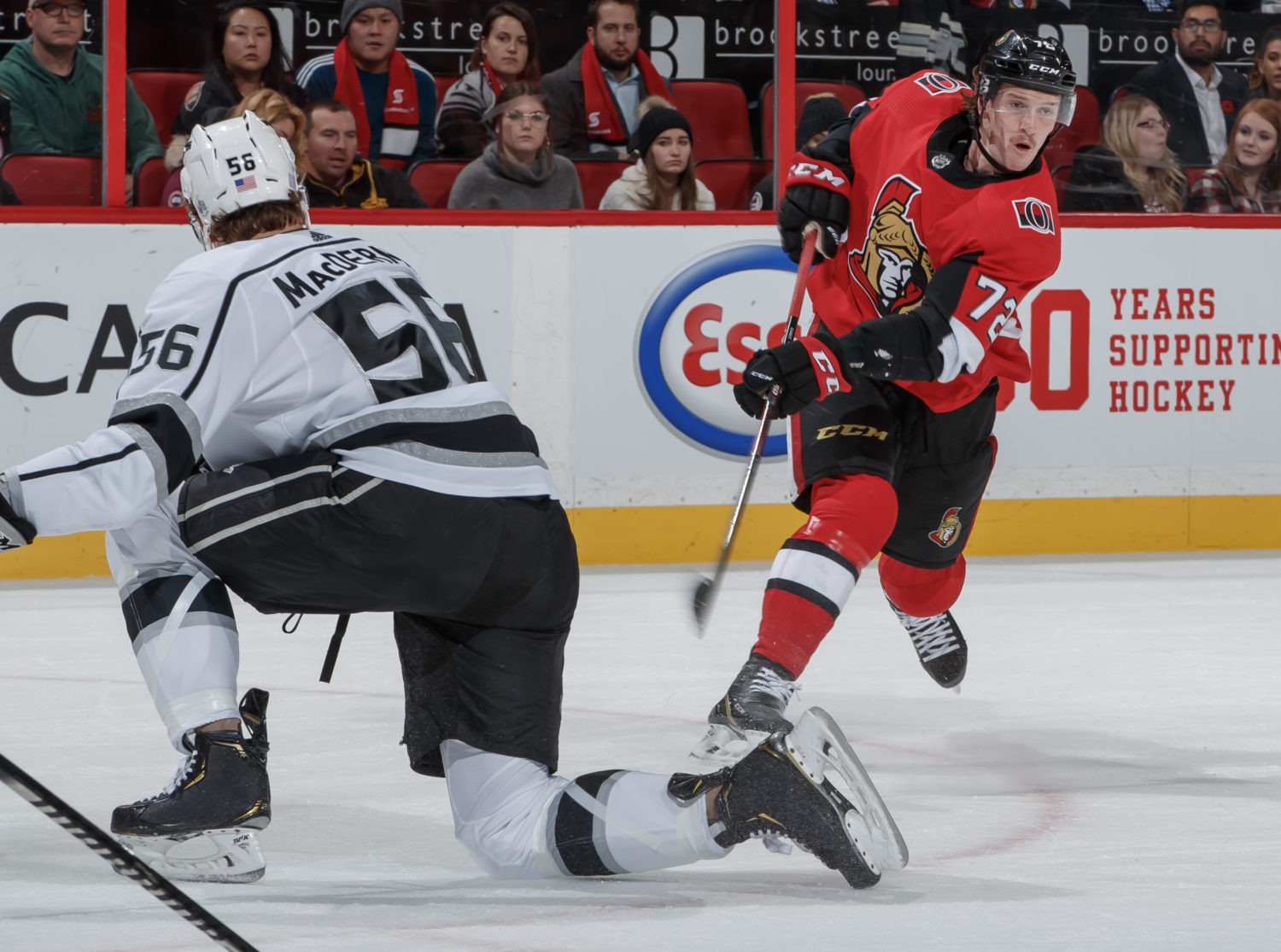 It was good to see Tyler Toffoli score last night, it was good to look down at the end of the night and see he’d taken five shots. He’s played well in his career against Ottawa, even if a portrait of his game or Thursday’s game in general won’t hang in the Kings-Senators Louvre. (Why did we even build that?) He had two great chances in overtime, but Anders Nilsson made two great saves. We were awfully close to a Toffoli-themed Waking up with the Kings. Which I would’ve liked. There’s a good bond a number of us have built with Toffoli through the years. He’s grown into a man since his days as a smiling, cliché-spouting, well-meaning nice kid who celebrated his 20th birthday as a Black Ace in 2012. Not that it should be mistaken as more important than what he does on the ice, nor does it represent his in-game temperament, but his lightheartedness comes off well in a sport where it’s important to market any available personality, and the Kings’ digital team and external media have capitalized on that. Perhaps it’s anecdotal and just a symptom of walking into a dressing room of a team that’s near the bottom of the standings, and perhaps it’s because he’s grown and matured, but I’m hoping we see more of that boyish and confident charm he’s always exuded. He’s in the final year of his contract on a team that won’t inflate his personal stats and is probably more likely to be traded than any other teammate. That uncertainty would make a lesser person itch. His inconsistent production has made the Kings itch, at times. But in the long-term, are you really betting against Tyler Toffoli? Or are you betting against the current version of Tyler Toffoli, one in which the team’s dearth of playmaking and skill puts a lower cap on his offensive ability? 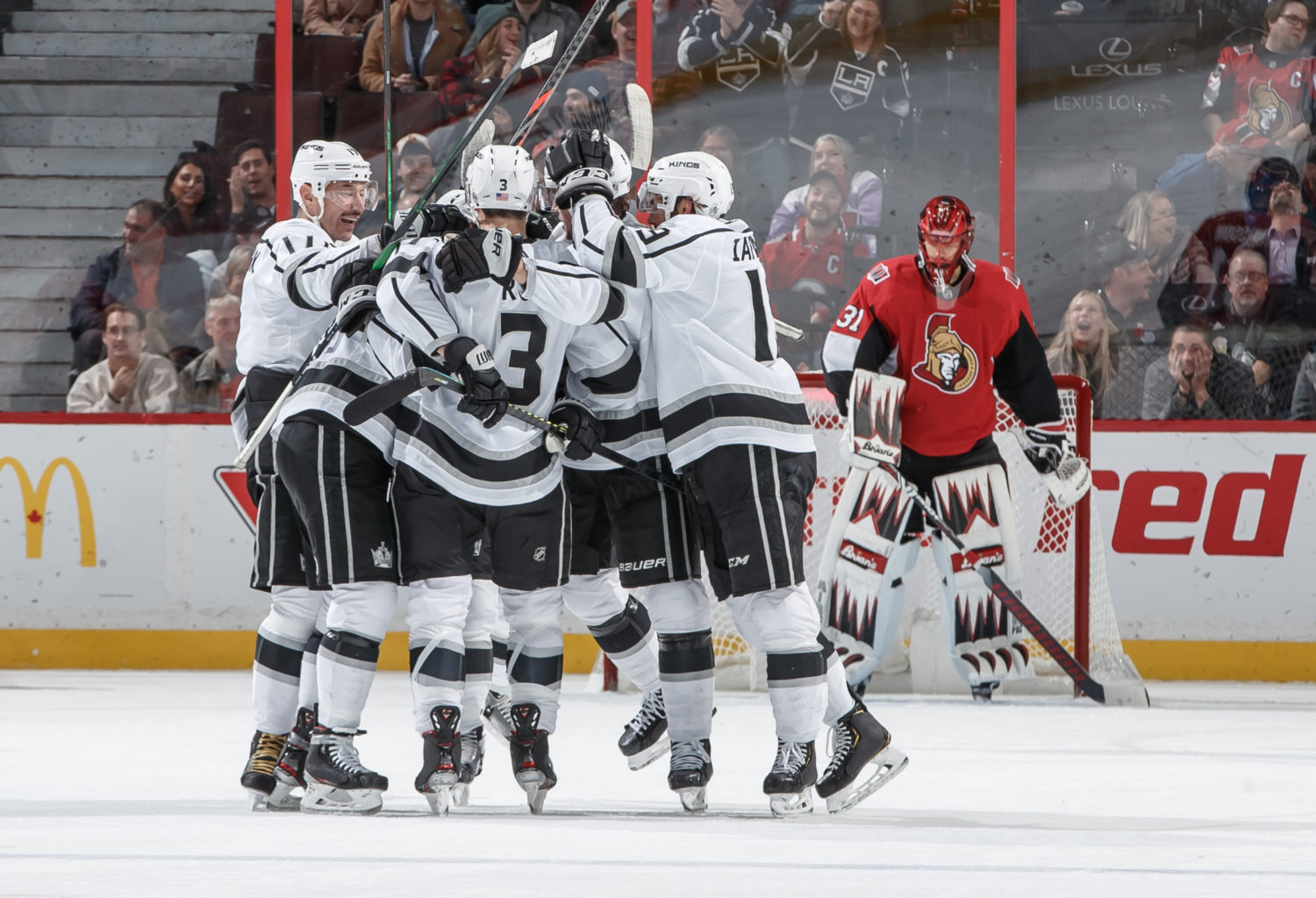