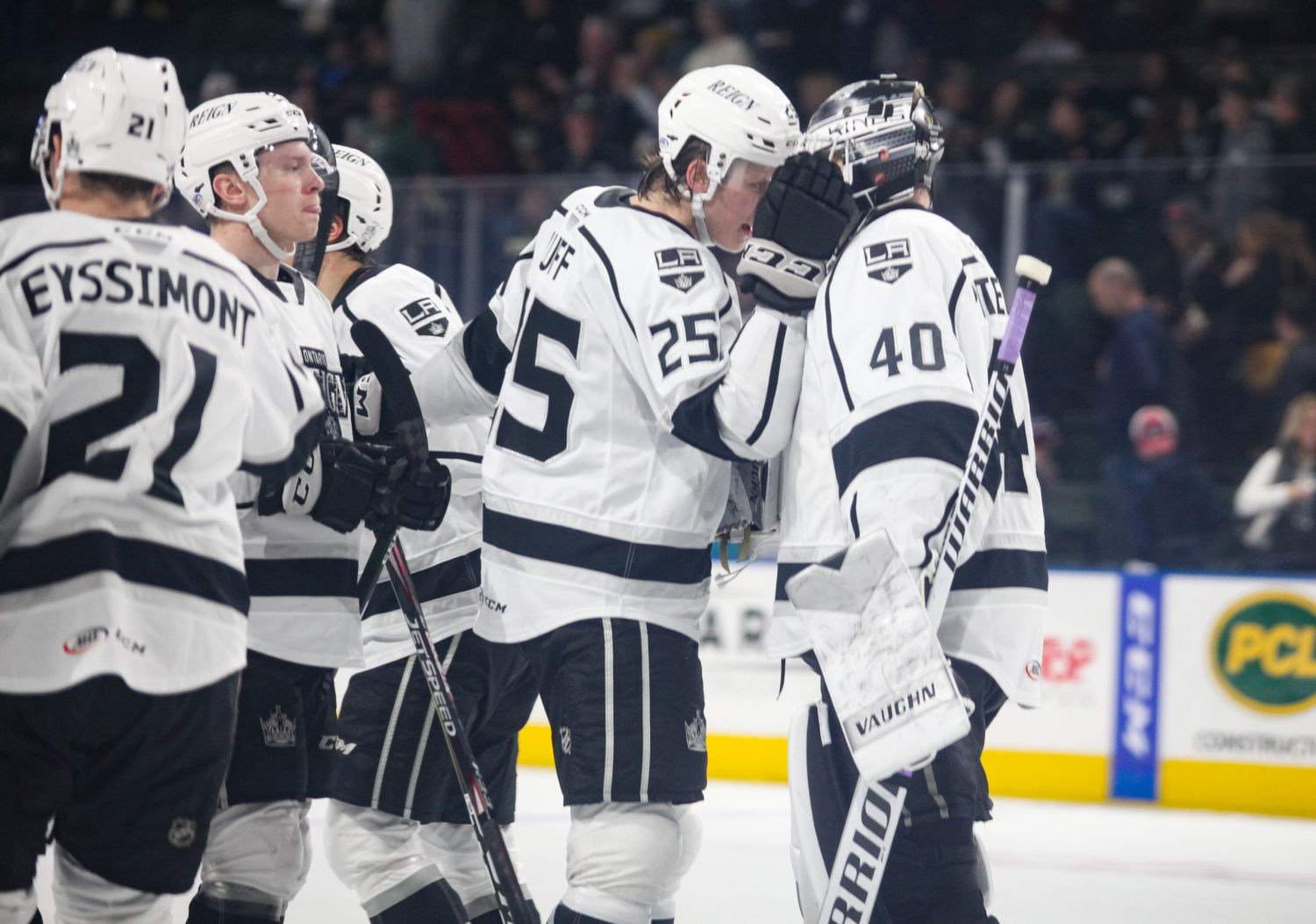 The Colorado curse has been broken – For the first time in six tries, the Reign skated to a victory at Budweiser Events Center, a 4-0 win over the Colorado Eagles on Wednesday evening.

Goaltender Cal Petersen earned his league-leading seventh victory of the season as he posted a 23-save shutout, his second of the 2019-20 campaign. Petersen made several big saves despite a lighter than usual workload. Forwards Martin Frk (2-0-2) and Matt Luff (0-2-2) each collected two points in the win, as the Reign improved to 7-3-2 on the season.

Special teams turnaround was key for Ontario tonight. 24 hours after going -2 in the special teams battle, Ontario was +1 tonight, courtesy of a power-play goal in the first period. Tobias Bjornfot started the play by leading a rush up ice and entering the zone with speed, something the Reign PP unit has struggled with recently. Bjornfot then fed Luff, who went cross-ice to Frk for the one-timer from his favorite spot on the ice, the left-hand circle. Ontario threatened more on its other looks as well then had been the case over the last few games.

The Reign PK was also clutch, with two 5-on-3 opportunities killed off, including a full two minutes in the second period. Mikey Anderson played nearly the entire 120 seconds on the second one, blocking a couple of shots in an instrumental kill with the score 1-0, while Petersen made a highlight-reel right-pad save to keep the Reign ahead.

After a travel day and a practice day, Ontario now moves on to Iowa for the only two road games this season outside of the Pacific Division. The Reign and Wild will square off on Saturday and Sunday in Des Moines.

Austin Strand on returning to the lineup and getting that first goal out of the way
It’s huge. I’ve kind of been thinking about it a little bit and it was nice to get it out of the way. [Hopefully] keep it rolling.

On being able to contribute with a goal as he returned
It felt huge. I felt like I had a lot of trust with Hajter, he was putting me out a lot, starting lineup, it was really nice to be able to play with Claguer. Me and him, growing up in Calgary together, train together in the summer, we’ve always talked about playing with each other and then finally [it happened] tonight. He’s back on his natural left side, I think he loved that, and then we just both play a similar way of always being open for each other and being both pretty solid puck-moving defensemen.

On what direction he got when out of the lineup from the coaches
Quite a bit – Me and Hajter were working on the d-zone, just being a little bit more simple. Sometimes in the d-zone, I over-complicate things, so we were working on goalie handles and just zipping it right up the wall, and I think it happened three or four times this game, so it was in the back of my mind a little bit more naturally, so that’s good.

Mike Stothers on the power play tonight and the power-play goal in the first period
We just talked about it last night, right? 24 hours later, it’s crazy how it works really. We didn’t spend as much time in the penalty box in the first period tonight, which gave us some energy, we still had some legs in us, so I think that helped. The power play looked good that first time out, got us a big goal, and that’s what you need to do, you need to do well on your special teams. Games are usually too tight, so if you can chip in with the odd power-play goal and do a good job shutting down their PP, usually things work out.

On the pair of 5-on-3 penalty kills
Well, here’s a stat for you. How many times have we been short two guys, so 3-versus-5, and how many times have we had a 5-on-3? We can only think of one when we had a 5-on-3 and so we were talking about it after the first one we got and then bang, we got another one. [Reporter: Full two minutes too.] Full two minutes, yeah. So I don’t have an answer for that. It’s not the ideal situation, but we had a good job from our PK and usually your best penalty killer is your goaltender and Cal was phenomenal.

On Matt Luff’s play with two assists tonight and playing in all situations
Luffer’s been good. He had a little bit of a slow start for him, maybe there was a little bit of a disappointment for not sticking up longer with the Kings or not staying with them, and that’s not uncommon. He worked hard in the summer and he wanted to make it, he didn’t, so it takes a little bit of time to get adjusted and I think we’re now seeing the Luffer that we saw in the past. It’s only a matter of time and I’m sure he’ll be back up.

On Austin Strand and Sheldon Rempal returning to the lineup
Obviously it’s a difficult situation to sit anybody out, but you hope that when they get back in, it’s going to be a positive contribution and I think both of them did real well. They all want to play, so that’s a good thing. It’s nice to see Strander get on the board and I thought Remps had some good jump to himself tonight. Hopefully, we can take that into Iowa with us.