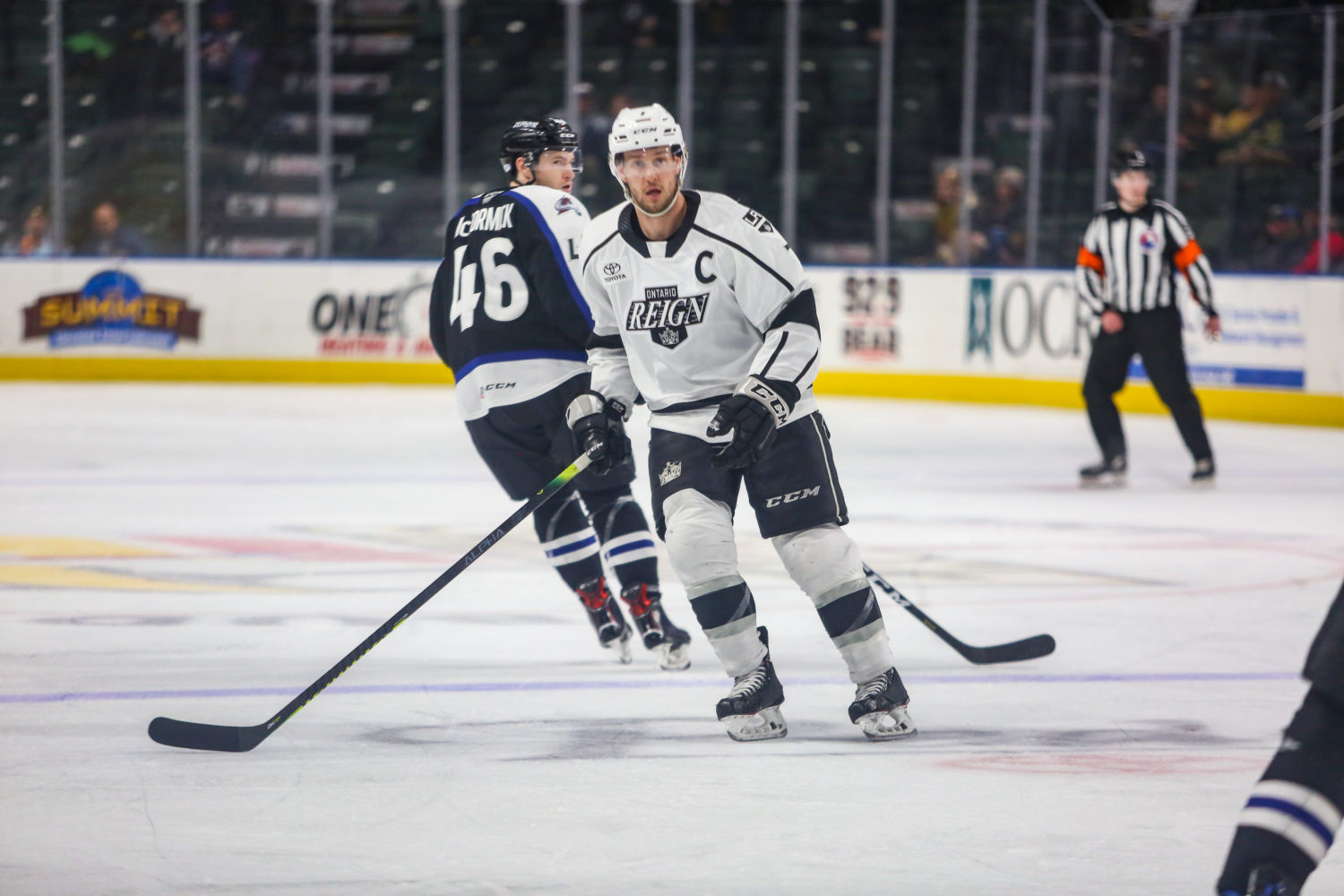 TONIGHT’S MATCHUP: The Reign begin a four-game road trip this evening, with the first of two meetings in Colorado. Tonight marks the first out-of-state game this season for Ontario, which has played its previous 10 in California.

WHAT TO WATCH FOR: For the eleventh straight game, expect goaltender Cal Petersen between the pipes – The third-year pro was first off after this morning’s skate in Colorado. On late were forward Sheldon Rempal and defenseman Austin Strand, who worked with assistant coaches Chris Hajt and Jaroslav Modry, while goaltender coach Matt Millar worked with Cole Kehler. Expect some alterations to the Ontario lines this evening. Defenseman Ryan Stanton is also out tonight, day-to-day per Head Coach Mike Stothers.

LAST TIME OUT: The Reign and Eagles have met once thus far this season, a 4-3 Colorado overtime victory back on October 11 in Ontario. The Reign were remiss to let that one slip away, as then-Eagles forward Jayson Megna (currently in NHL with Avalanche) tallied twice in the game’s final 2:25, before he assisted on teammate Jacob MacDonald’s overtime winner 1:52 into the extra session. Ontario forward and Colorado native Mikey Eyssimont tallied two points (1-1-2) to lead the Reign on that night.

FLEW THE KUP: Ontario forward Rasmus Kupari got back on the scoresheet on Saturday, with a late goal in the third period to dissolve a Bakersfield shutout attempt. Kupari started the season hot, with points in both games on Opening Weekend, but collected just one assist in his next seven games played. The rookie center also went without a shot for six consecutive games, something Reign Head Coach Mike Stothers touched on here.

DON’T MESS WITH THE JOHAN: Reign forward Johan Sodergran collected his first career AHL point on Saturday, with the primary helper on Kupari’s tally. Sodergran’s point came in his eighth game played this season and the winger talked post game on Saturday about getting some confidence from that point, and hopefully translating that into more production moving forward.

HI, I’M PAUL: Ontario defenseman Paul LaDue posted a four-game scoring streak from October 23 through November 1, that was snapped in the 4-1 loss to Bakersfield on Saturday. LaDue collected an assist in each of those four games, and is tied for third on the Reign in assists this season, one shy of team-leading Brett Sutter and Mario Kempe. LaDue is also tied for the Reign lead with a +8 rating, which is tied for seventh across the AHL.

TIP OF THE ICEBERGH: Reign contracted forward Mason Bergh was named as the ECHL’s Rookie of the Month for October, as a member of the Fort Wayne Komets. Bergh amassed eight points (4-4-8) from six games played in the season’s opening month, and collected a point in each October game he played. In total this season, Bergh is tied for third in the ECHL among rookies in goals (6) and tied for fourth in points (10).

SCOUTING THE EAGLES: Colorado has been led by forward T.J. Tynan, who has amassed 10 points (1-9-10) through nine games played. Tynan leads all Eagles players in assists and points and is tied for third in the AHL in helpers this season. MacDonald leads all Colorado blueliners with seven points (2-5-7), while forward Michael Joly leads the team with four goals from seven games played. In net, Adam Werner has taken the bulk of the work, with a 4-3-0 record from seven games played.