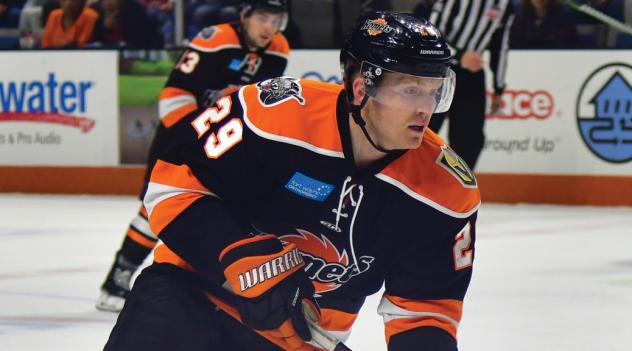 The ECHL announced yesterday that forward Mason Bergh has been named as the ECHL Rookie of the Month for the month of October. Bergh signed an AHL contract with the Reign over the summer, after he scored one goal from three games played last season, after he concluded his collegiate career at Colorado College.

Bergh amassed eight points (4-4-8) from six games played in October, and tallied at least one point in each game he played during the month, including a pair of multi-point efforts. On the season in total, Bergh has six goals and 10 points, ranking tied for third amongst first-year ECHL players in goals, tied for fourth in points.

From the ECHL’s Official Release –

Bergh scored four goals and added four assists for eight points in six games during the opening month of the ECHL season.

The 24-year-old had at least one point in each of his six outings in October, and had a pair of multi-point games, posting a goal and an assist on Oct. 12 against Kalamazoo and Oct. 25 against Jacksonville.

Under contract to Ontario of the American Hockey League, Bergh is tied for third among ECHL rookies with six goals and is tied for fourth among first-year players with 10 points. He made his pro debut with Ontario late last season, scoring one goal in three games.

Prior to turning pro, Bergh posted 105 points (43g-62a) in 149 career games at Colorado College and had 86 points (32g-54a) in 114 career games in the United States Hockey League with Chicago and Waterloo,