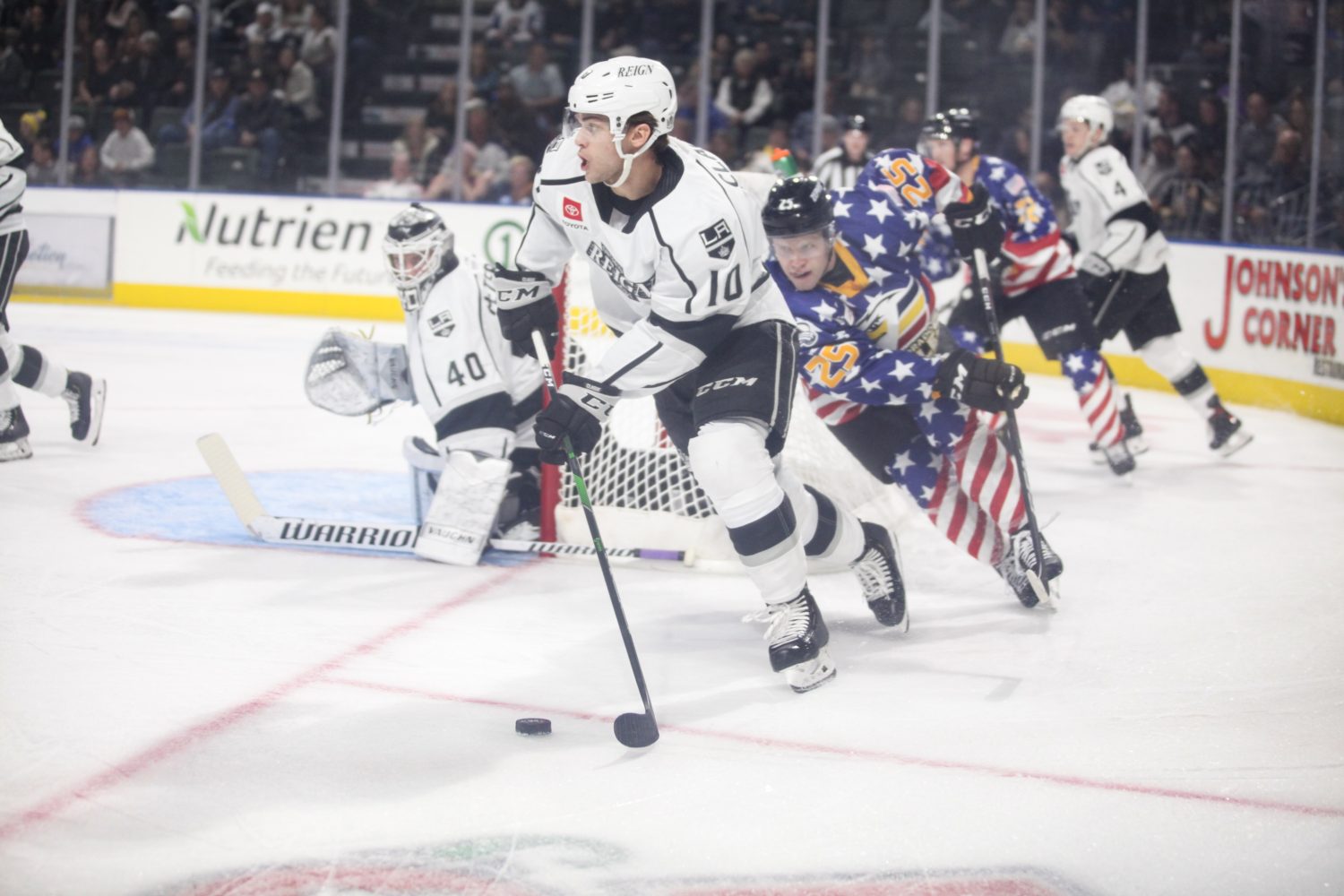 Another game in Loveland, Colorado winds up going against the Reign – Ontario entered this evening at 0-3-1 inside Budweiser Events Center and will head back to the hotel at 0-4-1, following a 4-0 loss against the Colorado Eagles on Tuesday evening.

The Reign found themselves shorthanded early and often, going on the penalty kill three times in the first period and six times in total, with the hosts converting on two of those opportunities. Ontario itself was 0-of-3 on the man advantage, with Colorado taking the special teams battle on Night 1.

While tonight’s effort was an improvement over Saturday against Bakersfield, the Reign know they need to be better tomorrow evening in all facets of the game. Ontario has scored just once in its last 120 minutes, and that was a late tally with Saturday’s game already decided. The Reign will need to find a way to generate more offense, while cleaning things up in both facets of special teams.

Sometimes, the best thing about losing in this sort of game is that you’ve got another shot tomorrow – Earning a split in Colorado would be a successful trip, but the Reign will need to find a way to generate more offense than they have over the past two games. Sorting out the power play, and getting more and higher quality chances at 5-on-5 would go a long way towards sorting things out tomorrow evening.

Reign and Eagles, Round 2, tomorrow at 6:05 PM Pacific Time.

Mikey Eyssimont on first games in Colorado, dating back to last season, and what went wrong
It’s tough to win a game when you’re in the box that often and the penalty kill has to go to work that often. We put ourselves in tough situations, whether the calls were earned or not, we have to be better with our sticks, we have to be better with more discipline and we’ll try to do that tomorrow.

On creating more chances 5-on-5
We talked all night about putting pucks to the net, from bad angles, just making sure we’re hitting the net, and then we’ve got bodies going to the net. I don’t think we did enough of that tonight.

On what he’s expecting in a response from the team tomorrow night
We have too much skill, too much grit, too much heart to do that two nights in a row. I think you can expect a lot more out of us tomorrow.

On playing a game in his home state of Colorado
Yeah, it’s always nice to have some family and friends in town. Obviously, being back at altitude and playing in my home state, that’s always fun.

Mike Stothers on things not going the Reign’s way in first games in Colorado
Well, last year’s last year, but this year we come in and we’re shorthanded immediately and consistently in the first period, now your bench is short. It was a long day of travel yesterday, and by no means am I using that as an excuse, but it takes a little bit to get going, the air’s a little bit thinner here. When you take that many penalties, I’m not sure we took them but we were called for them, guys are playing too much, you’re spending too much time in your end. Their power play is good and we kind of compounded the problem a little bit. We had some chances to clear the puck, we didn’t, so then it just builds from there. There was a lot of energy that was expelled early in the game, which affects you later on in the game.

On seeing some good things from the PK unit, but fatigue and mental mistakes catching up
That’s the thing, we did do a lot of good things on the penalty kill, but if you’re shorthanded enough, something’s going to come and bite you on the backside. One of them is fatigue, momentum is another and opportunity for them. There’s some positives to draw out of it, but bottom line is they scored two power play goals and we didn’t score any on ours, so there’s the difference in the game.

On what’s gone wrong on the power play, and what can be done to correct it
It’s a collective group. We’ve got to be in-sync, we were guilty of not executing properly. Our routes weren’t very good on the breakout, we were either too far ahead of the puck carrier and waiting for a pass, having to stop at the far blueline, we didn’t attack with any speed. We had some passes that were tape-to-tape that for some unknown reason were exploding off of guys’ sticks, it just seemed that we couldn’t get it going on the power play. We didn’t have any o-zone time like they did and that makes a big difference.

On if he’s expecting a different collective effort from the group tomorrow
I had no problem with the effort – I mean, I’m actually happy with the fact that we played harder than we did on Saturday at home. I thought we were physical and I thought we stuck up for each other. If you’re trying to create an identity, which I still think we are, I don’t think the score was reflective of the fact that we were easy to play against, it just wasn’t our night. I think Colorado knows it was in a game, from a physical standpoint. Tonight was different from Saturday night in the fact that, from the opening faceoff from the final buzzer, yeah, we were trailing 4-0, but we competed through the whole thing. Was it pretty to watch? No. Was it effective enough to get us the win? Maybe over time….you know what, teams won’t want to play us.