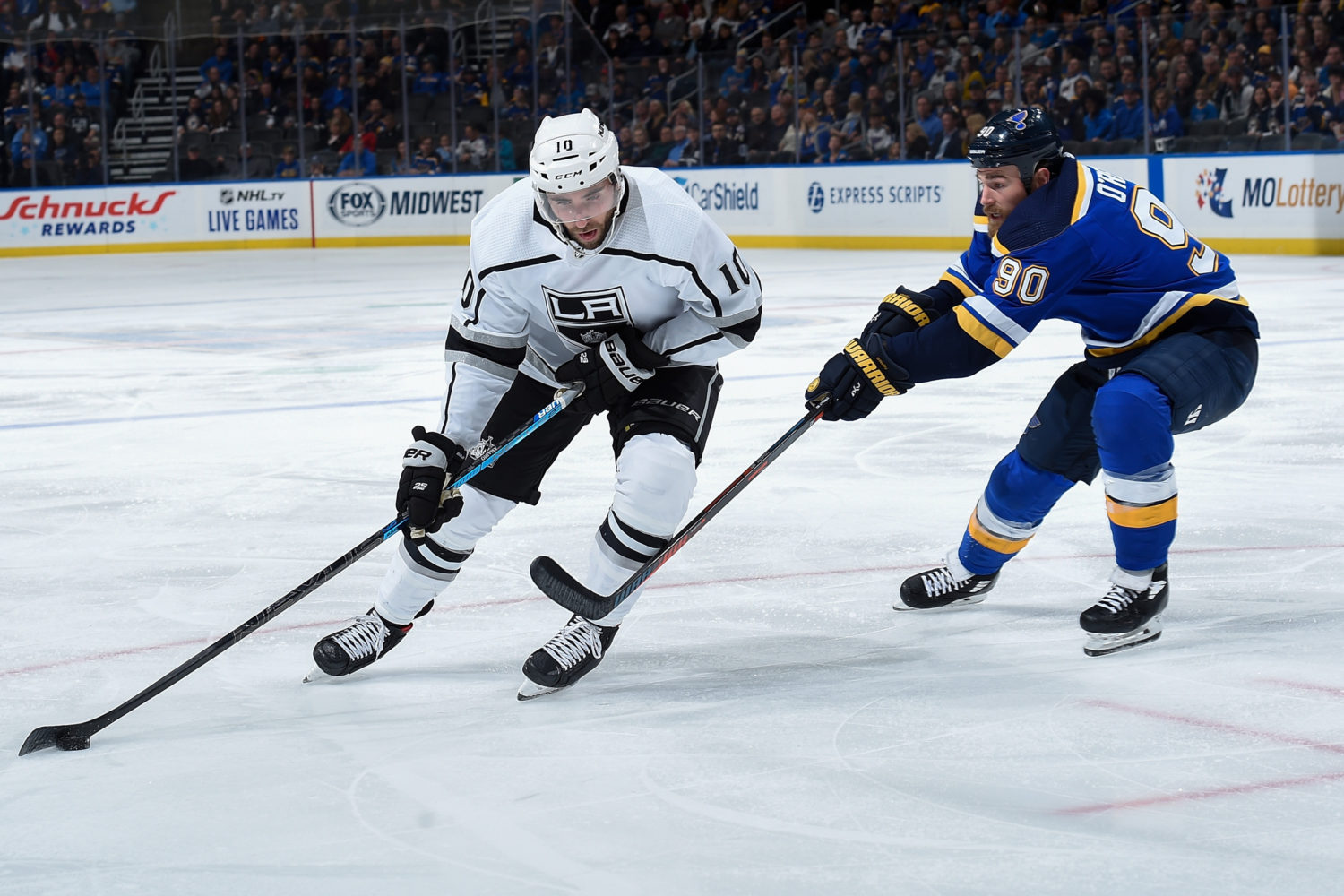 INSIDERS. A fine Friday afternoon to you. A rough 24 hours was had. Perhaps it was induced by the penalty kill. Perhaps it was the press room chicken. In any case, we’re back and operating at almost 100% after yrs truly became the latest member of the Insider household to get the stomach bug that has made its rounds. Let’s get down to brass tacks.

The LA Kings assembled on the TSPC ice shortly before 11:00 a.m. this morning and aligned thusly:

— We believed Joakim Ryan, Nikolai Prokhorkin and Austin Wagner to be extras, though keep in mind that Trevor Lewis wasn’t spotted on an initial rotation on Tuesday yet was still in Wednesday’s lineup. The above is a general template, not a confirmation. The alignment is tougher to process because there aren’t as regularly “flow” drills or line rushes at the outset of practice that make it easy on us lazy reporters. Rather, they jump into their drills when the whistle blows, and away we go.

They’re actually in a little bit of a break in what began as a breakneck schedule. After a 12-in-23 that opened the season and concluded with Sunday’s game at Chicago, they’re now on a Wednesday-Saturday-Tuesday rhythm that will allow continued layering of both teams systems and the special teams details that need work.

“There was pace today in practice,” Todd McLellan said. “A lot of up-and-downs, yet some battles, some focus on the power play. Trying to spend a lot of time on the special teams, but today was the first real true day we could work on some other systematic stuff. Just not enough practice time – too many games. But we thought that would happen – I think if you recall at the beginning of the year when we had that week and tried to get things in place. We’ll take them as they come.”

McLellan noted that this week’s schedule was adjusted on the fly because of the need to address the penalty killing woes. Los Angeles allowed four power play goals in Wednesday’s 5-3 loss, the third time through 13 games they’ve allowed at least three. “If we talk about three hours of practice, 33% of it was spent in the penalty kill situation,” he said. “So, we got shorted in other areas, but we’ll make up for it later on.”

— Other bits from yesterday. Tyler Toffoli met with the media and rejected the idea that his game was “off the rails.” Toffoli, a minus-four for the first time in his career on Sunday – he had only been a minus-three twice through his prior 468 NHL games – entered the year fifth in franchise history with a +83 rating. Now a minus-four on the season, he has since dropped behind Bob Murdoch (+80) into sixth. Since the day he made his debut, only seven league forwards – Brad Marchand, Patrice Bergeron, Ondrej Palat, Nikita Kucherov, Jonathan Toews, T.J. Oshie and Reilly Smith – have posted better plus/minus ratings.

The shot and chance-based metrics all indicate he’s been on the right side of the puck, but they did as well last year. It’s a conundrum that’s difficult to piece together, but Toffoli is among the players capable of providing an impact for the team, so when he goes without “a single point, shot, hit or block in the loss to the Blackhawks,” as Jack Harris wrote in the article linked above, it’s an indication that not everything is adding up.

— Michael Amadio’s drop-off from his early perch has been apparent both in live viewings and his primary statistics. The club’s leader in preseason goals, he carried his hot play into the regular season with two goals, three points and a plus-two rating in his first four games. He’s fallen down the lineup over the last two weeks, however, notching just one assist amidst a minus-seven rating over his last seven games. “My defensive game has slipped a little bit. I just want to get back in there, be responsible and have the coaches be able to trust me,” he said Friday.

And if that’s what he’s telling media, that’s also what the coaches are indicating to the 23-year-old. “It’s just ‘stick with your game.’ You can’t get too low on yourself. Just somehow have an impact in the game,” he continued.

Like many teammates, he’s grading quite well in secondary, directional-based metrics. He’s second among qualified team forwards in five-on-five Corsi-for and scoring chance-for percentage (via Natural Stat Trick) but has been sunk by an on-ice .831 save percentage. He’s been happy with his looks and chances and where they’ve been coming from. And that’s not to suggest that he’s due for an immediate turnaround, or that possession rates should be confused with points on the scoreboard or in the standings, but that there’s a good package in his skill set to work with.

“Mods is a very effective, smart offensive player. We’re looking for some consistency from him. I think he will be a tremendous player in the league, but we’re pushing him to find some consistency from night-to-night, the stamina in his game, the ability to sustain things. When we’re all said and done, he’s going to be a real good player for us.”

— Gabe Vilardi (back) practiced in a red, no-contact jersey with Ontario’s on Thursday at TSPC. Those following along over the last few weeks recall that the impending segue was to transition to practicing with Ontario, and he’s now doing so in a limited capacity.

Caught some of Gabe Vilardi’s morning skate with the Reign. He’s in a red non-contact jersey but seems to be skating smoothly and did some nice things with the puck. An example: pic.twitter.com/UUlEQ8bUsq

Ontario plays host to a talented Bakersfield squad over the next two nights at Toyota Arena. From there, they head out on the road for a week with a pair at Colorado (Tuesday-Wednesday), followed by a weekend set at Iowa (Saturday-Sunday). Based on conversations with hockey operations, he’s not expected to travel with the team at the outset of the trip, but there’s an outside chance he could join them in Des Moines. That still seems to be a pretty big step; his progress will be gauged again early next week.

Here’s how each side will line up when the puck drops at 6 PM!! #SweepBucky pic.twitter.com/CixUL0RpAs