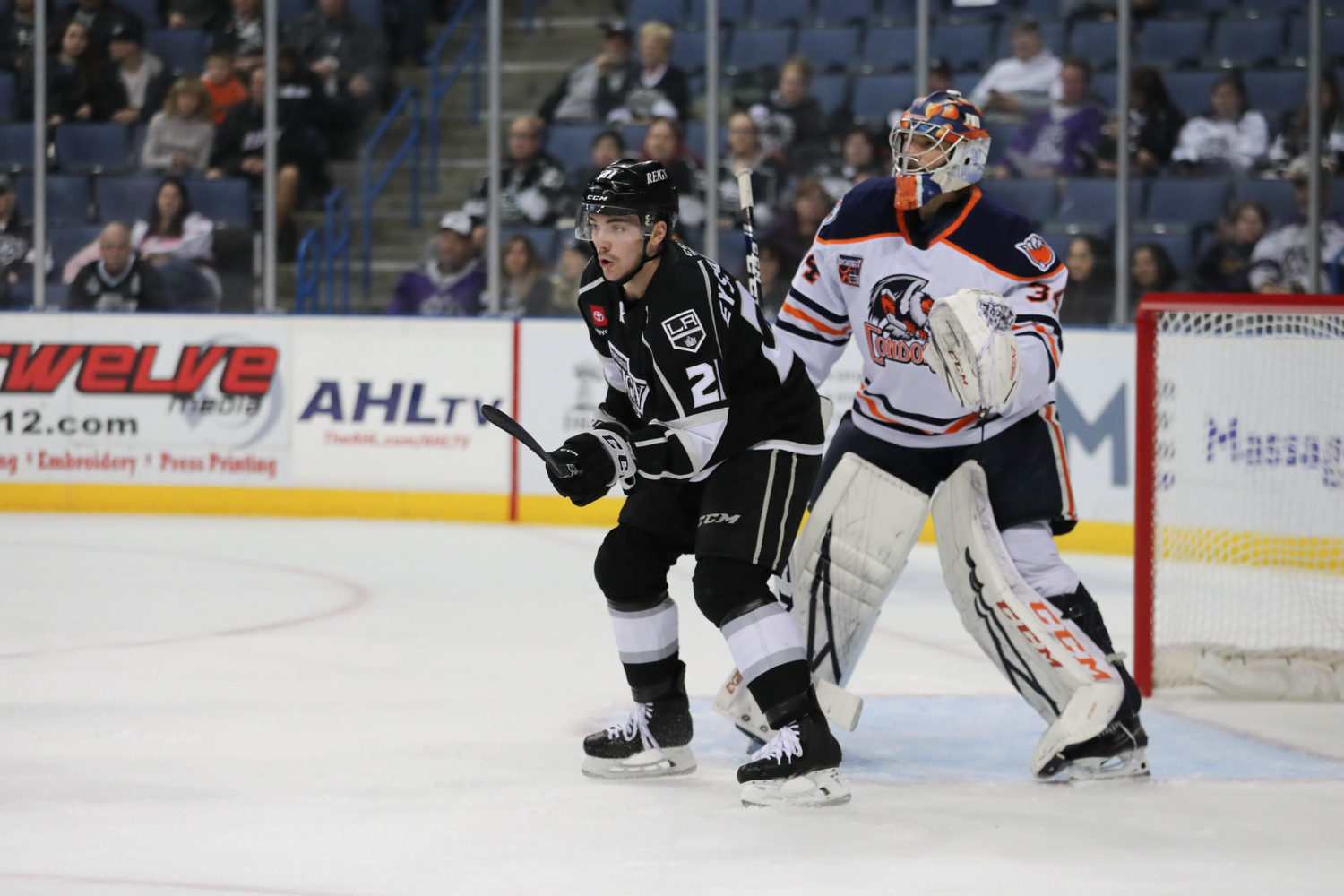 In what was perhaps the most entertaining and exciting hockey game the Reign have played this season, with lead changes, physical play and close calls throughout, Ontario earned a point but found itself on the wrong side of overtime in a 3-2 defeat against Bakersfield, in the first half of a back-to-back between the teams this weekend at Toyota Arena.

The Reign got goals from forward Brett Sutter and defenseman Kale Clague, with the latter tying the game at two midway through the third period after Bakersfield scored twice in a row preceding. Forward Mikey Eyssimont had assists on both Ontario tallies on the evening, his third multi-point game of the season.

Reign Head Coach Mike Stothers likened things to a playoff series, considering the two teams will meet again here in Ontario tomorrow, and as a spectator in the press box it certainly had elements of that feeling. Even at 1-1, it felt like one goal could make all the difference. Ontario and Bakersfield have met three times already this season, with the scorelines standing at 3-2, 2-1 and 2-3 and two of the three games have merited overtime, with each side winning one.

Both teams played physical tonight, with things feeling on edge throughout the game at times without getting out of control. A hard-hitting, hard-fought game, with both teams earning a deserved point, and Bakersfield coming away with its first victory of the season over the Reign.

Tonight’s affair certainly could have featured more goals too – Stuart Skinner was good in net for the visitors, making several saves on odd-man rushes, including a strong, right-pad save on a Rasmus Kupari in the first period, that made the difference. Jaret Anderson-Dolan, Sean Durzi and Sheldon Rempal each had good looks as well, with Skinner keeping out two and one going wide. Bakersfield had 3-4 opportunities where the puck trickled through, over or around the crease that easily could have bounced in, with one of those opportunities in the second period seeing a quick whistle benefit Ontario, as the puck did go in the net behind Cal Petersen.

All-in-all, Part 1 of this weekend’s series was very entertaining and Part 2 tomorrow, Hockey Fights Cancer night in Ontario, should bring more of the same.

Kale Clague on the hard-fought, competitive game
It’s third time we’ve played these guys and we always have good games, I think this is the second overtime game we’ve had against them. They’re always tight, that’s good though. I think our defensive game has cleaned up a lot, it goes to show when you get into 2-1 type games. It creates a rivalry early in the season. Obviously it was a tough way to go down, but if we get the next one tomorrow and three out of four points is a good weekend.

On the Reign creating chances tonight offensively
Yeah, I think we were really happy with our game. We got on them early, I thought we pressed them and our forecheck was strong, we were getting pucks in behind their D, we were strong on them. We’ll have to continue that tomorrow, we’ve just got to stick with it.

On his pairing with Mikey Anderson and how they’ve played together
He’s been really good. Obviously he’s a first year guy, but he plays like a vet. He’s easy to play with, he’s great defensively, I think it’s easy. We’re both talking, we’re always talking about different scenarios throughout the game. When we’re communicating, I think we’re starting to build a good chemistry with knowing where each other is all over the ice. I think our d-zone has definitely cleaned up since opening night.

On both goals tonight coming from defensemen walking the blueline, and if that’s been a point of emphasis
We always focus on that. After practice, we’re always working on d-shooting, we’re always trying to find lanes, shoot for sticks and obviously it’s a big part of the game for D. We work on that a lot.

Mike Stothers on tonight being an entertaining hockey game
I thought it was a terrific hockey game, to be honest with you. Nine games in and that was by far the best played game by us, the best played game by Bakersfield against us, two good teams. We probably could have kept going, it’s unfortunate that we didn’t get that final point, but we knew it wasn’t going to be easy coming in. I like the steps we’ve taken, the direction we’re going, if we keep going that way I think we’ll be okay.

On the team’s strong style of physical play tonight
You know me, physical, that’s a good way to play. You disrupt the flow of the game, you separate the man from the puck, we did a good job of that, but give some credit to them, they played well. It was almost like a playoff atmosphere, and it’s kind of nice that we’re going right here back to back tomorrow night and continue it. It’s almost like a playoff series.

On if he feels the Reign have cleaned things up defensively over the last couple weeks
I think we’ve gotten better. I like the fact that we’ve whittled away at keeping the shots against down and sometimes the better indicator is the quality of chances that the opposition is getting, I think we’re doing better there. We look a little bit more organized in all three zones and you can see that the guys are implementing what we’re trying to get across. It’s all positive right now and we’ll play again in less than 24 hours.

On easing Durzi back into the lineup with a 7 defenseman look
Durz didn’t even make it through a full period in game number one, and although he’s looked terrific in practice and he’s been cleared, it’s one of those things you just never know, so we wanted to make sure that he was sure and we were sure. You think back to the first game when it happened, we did have seven D that night so it worked out, but if you have to play five D in the first game of a back-to-back, it kind of wears on your backend. I just think we were being a little bit over cautious, but I thought he came in and played real well, he looked good. He makes some passes that you don’t see from a lot of players, certainly a kid as young as him. Nobody looks somebody off better and then threads a seam pass better than Durz.

On how he feels Mikey Eyssimont has progressed
It depends on the day….that’s how I feel about all of them. He played hard tonight. Mikey was fully engaged here tonight, to the point where he was even irritating the refs, I think we might have to tone him down a little on that, but he’s been good. He’s had his moments, they all have, but here we are talking about it, we’re saying this, that and the other thing, and we’re taking one step forward and hopefully not two steps back. We want to keep making progress and we won’t get too elated about anybody yet, but he’s been good.

On what he’s liked and not liked about Rasmus Kupari’s game as of late
Well, I think there’s a lot more that we need to see from Kupari. He didn’t play much [against San Diego last weekend]. He’s playing the middle and he was playing a lot in all situations, power play and with some pretty talented hockey players and he went six games in a row without a shot. The middle drives the team, drives the line, so not much was being created. We had a good talk, him and I, and he’s just a kid. Sometimes, it’s a little overwhelming for them. Again, as I’ve said, they come in and they don’t just light it up right away, it’s a process. He’s going to have some ups and downs, but nothing has been really, really high and nothing has been really, really low, but we can’t go six games without a shot. 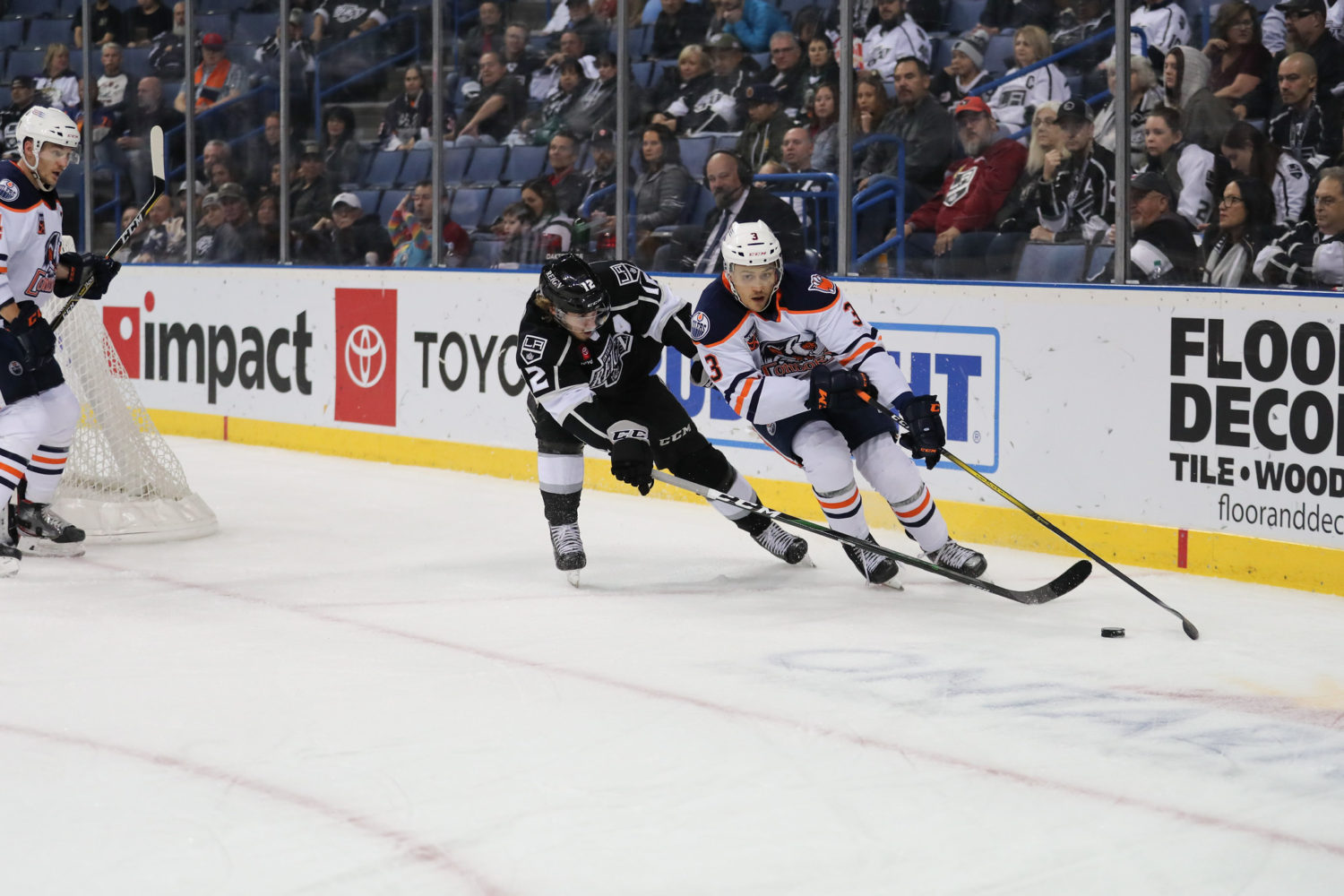 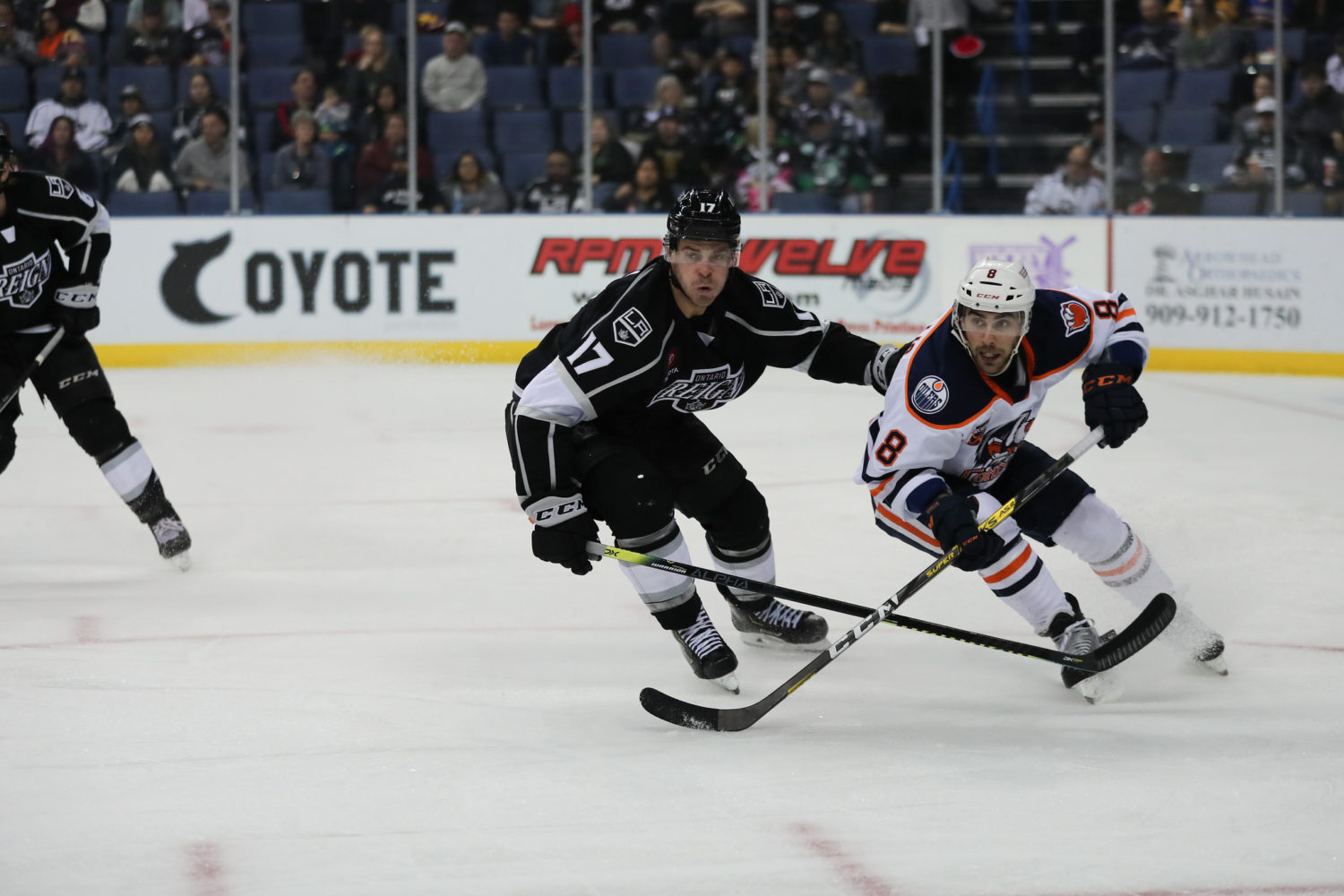