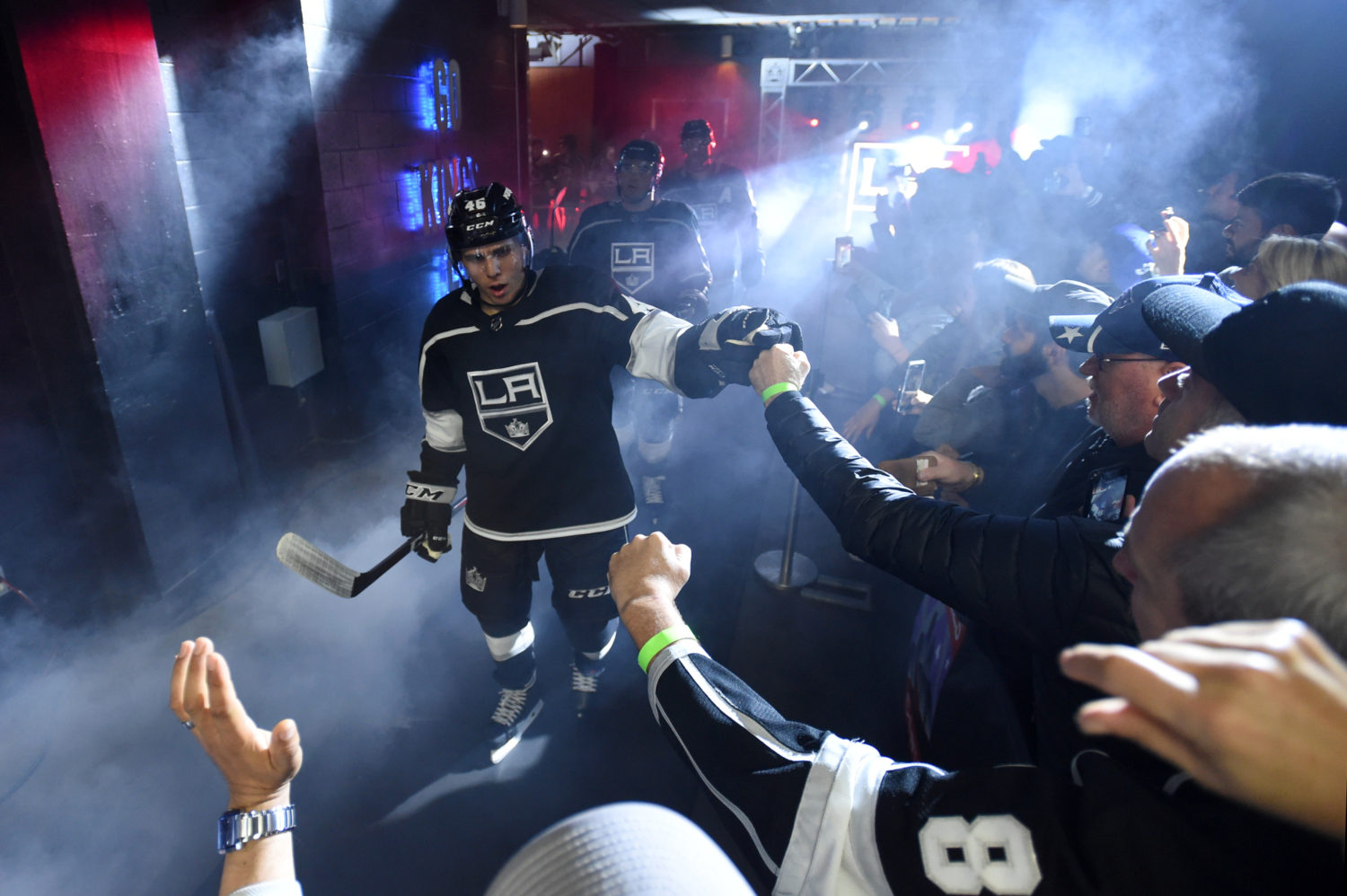 Today’s game-day notebook is below. If you’re looking for today’s lineups, click here.

Before the Blake Lizotte and Austin Wagner stories, some housekeeping notes:

–Shared it on Twitter but not here, yet: Derek Forbort (back) began skating on his own yesterday at TSC in a tracksuit. There’s no timetable on when he’ll return to action, but this is still an encouraging sign and part of the rehabilitation roadmap.

–These are two of the oldest teams by average player age in the NHL, with The Athletic ($) calculating at the start of the season that Minnesota was the seventh-oldest and Los Angeles the eighth. (This has since changed due to injury, particularly on Minnesota’s end.)

Independent of these specific teams, at ice level, do games or shifts contested by more veteran players have a particular stigma, as opposed to games contested by younger players and teams? “The veterans tend to have a little more poise in certain situations, a little more calmness, but the youthfulness in the league is forcing those veterans to play a little faster and maybe the poise or the holding onto it for an extra second is costing some of them.”

–There are a number of storybook aspects to Blake Lizotte’s swift rise to the National Hockey League. It was literally only months ago when Lizotte, who signed with Los Angeles as a free agent late in the 2018-19 season, was hearing the familiar refrains that discounted his terrific work ethic and maturity in favor of a pesky detail he didn’t have control over – his height.

Now, the 5-foot-7 center is looking “to show that I can play out here, because growing up, people always wondered, ‘oh, can he make it, is he too small, is he this, is he that?’ It’s cool to be here. I’ve been dreaming of this day for a while, so it’s really special, and I hope to just play well and ultimately help the Kings play [well] tonight.”

There will be large pockets of support at tonight’s game. Lizotte’s mother, Lisa, purchased between 50 and 60 tickets for tonight’s game, based on Blake’s estimation. An additional group of roughly 200 supporters will also make the drive down from Chisago Lakes – described by Blake as “a summer cabin town” – as well as his extended family that hails from an area just southwest of Duluth. “Definitely feeling the support here in Minnesota.”

He’s also feeling the support from his teammates, who called on him to lead the stretch from the middle of the center ice circle at Friday’s practice. “I could hear the players talking about him – how mature they think he is and how grounded he is,” McLellan said. “I think he’ll be just fine, and I’m not going to worry about him one bit.” 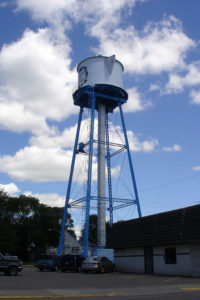 Lizotte is third generation Finnish-American, though he’s also of French and German descent on his father’s side. But Minnesota is home to the largest concentration of Scandinavian Americans in the United States, and his hometown of Lindstrom, adjacent to Chisago Lakes and just under an hour away from the Twin Cities without traffic, is known for its iconic water tower, fashioned into a Swedish tea kettle inscribed with “Valkommen till Lindstrom.” Its sister city is Tingsryd, Sweden.

“My grandparents live up in Cloquet, Minnesota, and Esko, and if I go up there and I run into someone, it’s a good chance I’m related to them somehow,” he said, laughing. He travels up there on the holidays to visit both sides of his family. Tonight, they’ll be among the contingent that traveled south to St. Paul.

This is the State of Hockey, and in addition to being one of the most well-maintained arenas in the league, Xcel Energy Center is regionally specific and does a wonderful job honoring the deep hockey heritage across the state. The jerseys of every boys’ and girls’ high school teams are represented on a wall that surrounds the interior of the arena and faces the concourse, and there hangs a jersey from his former high school, Chisago Lakes High, “but [with] an old one, from the ‘90’s, I think,” Lizotte said.

“I played here in high school, the state tournament, and in college quite a few times. But this is definitely a different feeling. Going on for practice was cool. Kind of a “hit-me” moment. ‘You made it here.’”

It’s obviously not the same as playing on the Xcel ice in the Minnesota High School Hockey Tournament. “Growing up as a kid, coming to Wild games but dreaming about playing in the NHL in this building someday – that time has come, and I’m really excited,” he said.

McLellan wants him to “just relax and play – he knows that.” He won’t have to say anything extra to him.

“The benefits of getting fired, I got a chance to watch a lot of college hockey last year with my son playing, and they played St. Cloud a lot. The NCHC Tournament here, Blake was really good in it, and as I watched him play and listened to some of the college players talk about his tenacity and how hard he was to play against, it intrigued me a lot. Heading into camp, he began strong and got better as it went on and has never looked back since. He deserves everything he’s getting right now, and we want to keep him there,” said McLellan, very much appreciating the homecoming.

“I can only think of what it would be like if my son was put in that situation. We’d be so excited as a family. Everybody would be out to watch and cheer on, not only him as an individual, but the team, and I’m sure that’s been happening for him and his family right now. We hope that he’ll have a game like he’s had every other night.”

It will be a BIG night for Blake Lizotte, who returns to his home state of Minnesota, to play just the 12th game of his NHL career. @CarrlynBathe sat down with the @LAKings rookie to discuss the emotions involved. Hear more on #LAKingsLive at 4:30 PM. pic.twitter.com/36qtGTBw62

–The team has moved past Thursday’s game, but there was one important footnote to share: Austin Wagner joined the group as the extra skater with Jonathan Quick pulled during the late-game 6-on-5 situation.

McLellan explained that it’s not easy to practice such situations because it requires the full ice, even if the faceoff is the most important situation. Wagner joined the play on the fly, and remained there for a faceoff, where Anze Kopitar and Dustin Brown directed him where to go upon a win at the dot, which Kopitar provided.

It was a personnel decision that caught the eyes of several of us upstairs and seemed to indicate that McLellan had thought highly of Wagner’s performance in several shifts leading to that point. That was part of the reason McLellan chose Wagner, an excellent skater capable of using his size to the team’s benefit.

“Austin has a tendency to show up in the chances-for sheet every night because of his speed and his ability to pull away from players. It hasn’t translated into a lot of goals, but at least the chances are there, and he’s a big body,” he said. “In that situation, I thought he had a good second half of the game and it was a bit of a reward for him to be out there. In his role, he’s doing everything we ask him to do, he’s got to clean some things up in and along the boards in our zone, and he knows that. We’ve talked to him, we’ve worked with him a lot, and we’ll continue to do that. When he gets that down, he’ll even become more effective.”

In the end, the team was scored on, though the purpose became disjointed the longer the team played 6-on-5. When Brayden Schenn scored into an empty net, Wagner was off the ice. (He returned to fight Ivan Barbashev with the game out of reach.) “We didn’t handle the situation well. We were set up to handle it well. A few individuals didn’t handle the empty-net goal very well at all. We were equipped to play in that situation and just didn’t execute at all,” McLellan said.

Todd McLellan, on the balance of using hot players in 6-on-5 with those who’ve practiced that role:
With about four and a half minutes left we had a power play, and we ran our power play units and we kept running them, one unit to the second unit to the end of the night, and when we pulled the goalie, we looked at what was left and tried to pick based on hunch and the type of game it was. Some would say, ‘well, Blake Lizotte or somebody should be out there.’ But the size in and around the blue paint was something we were looking for, and Wags provides it. Plus, he gets chances, so that’s how [Thursday] was deducted. As we go forward, you want guys that are having good night and are effective in the game on the ice at that time.

Austin Wagner, on where he was directed to play off the faceoff:
Obviously, you’re out there with some of the best players in the league in Kopi and Carts and guys like that, Dewey. They know where they want me, so they wanted me to be on the outside so if a puck got there, I could go get it or use my speed to basically disrupt or try to get the puck back for them. I got a chance, but I was right in front of the net, and I think that’s where I should be so if the puck does pop out for a rebound, I could jump on it quickly. I don’t think I’m going to be a guy that’s running the half-wall with an empty net, I think I’m going to be a guy trying to find that rebound or going and getting it and giving it back to them. I think that’s my job on that.

Wagner, on where he’s made strides in his netfront play, and where he’s looking to improve:
Coming in from last year, a lot of my chances came off straight speed and breakaways, but later in the year I started to learn that you can get an extra … five goals for sure just by being in front of the net. They’re not always going to be speed chances. There are a lot of guys that make a living off of just standing in front of the net and touching pucks or getting rebounds. For a long time, that was Tomas Holmstrom. He made a lot of money and scored a lot of goals by doing it. I think I learned that near the tail end of last year from Dave Lowry and guys like that – Marco tells me to go to the front of the net and I’ll get rewarded. Now I’m starting to learn that the front of the net is a good place to be. 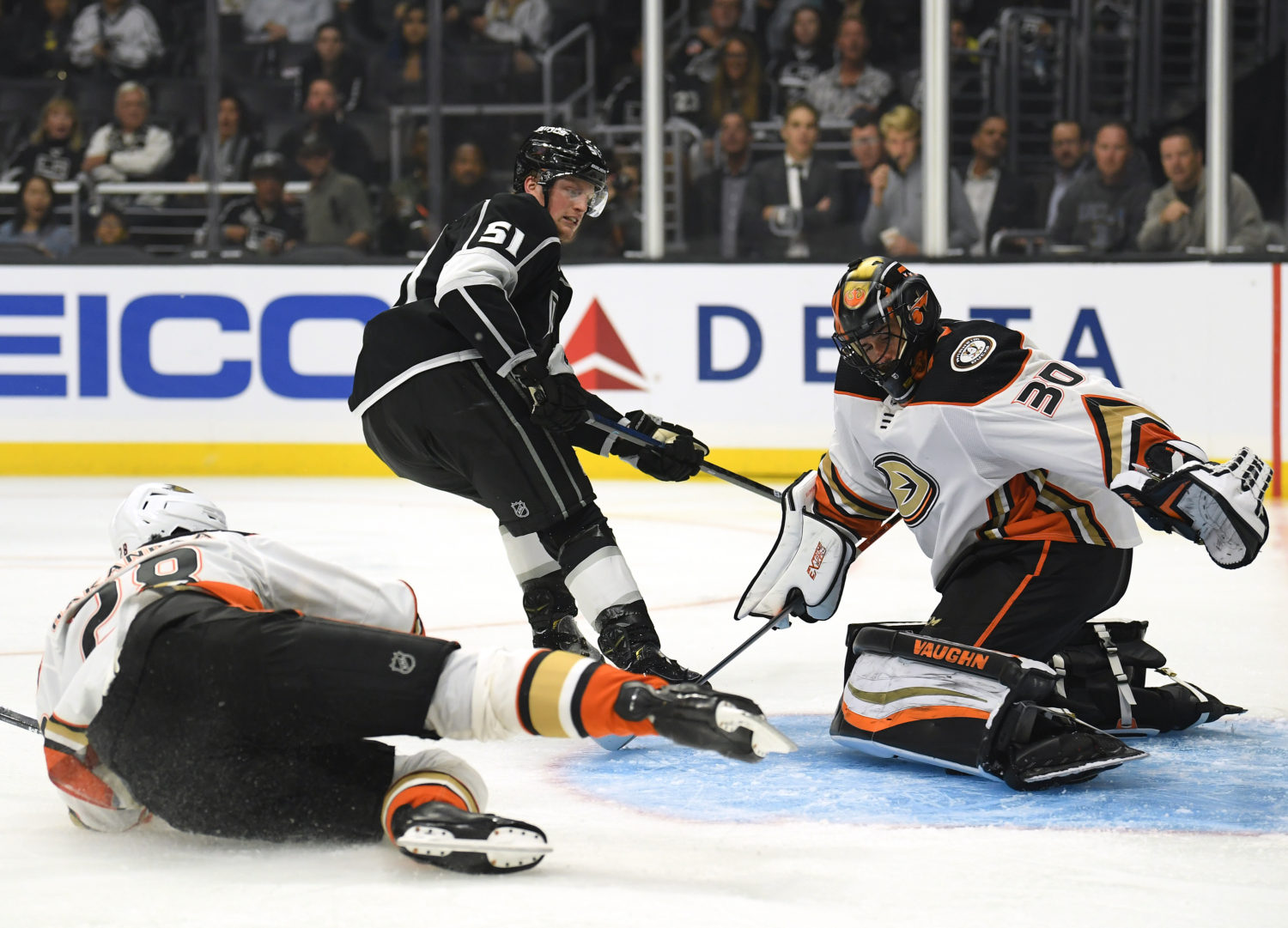