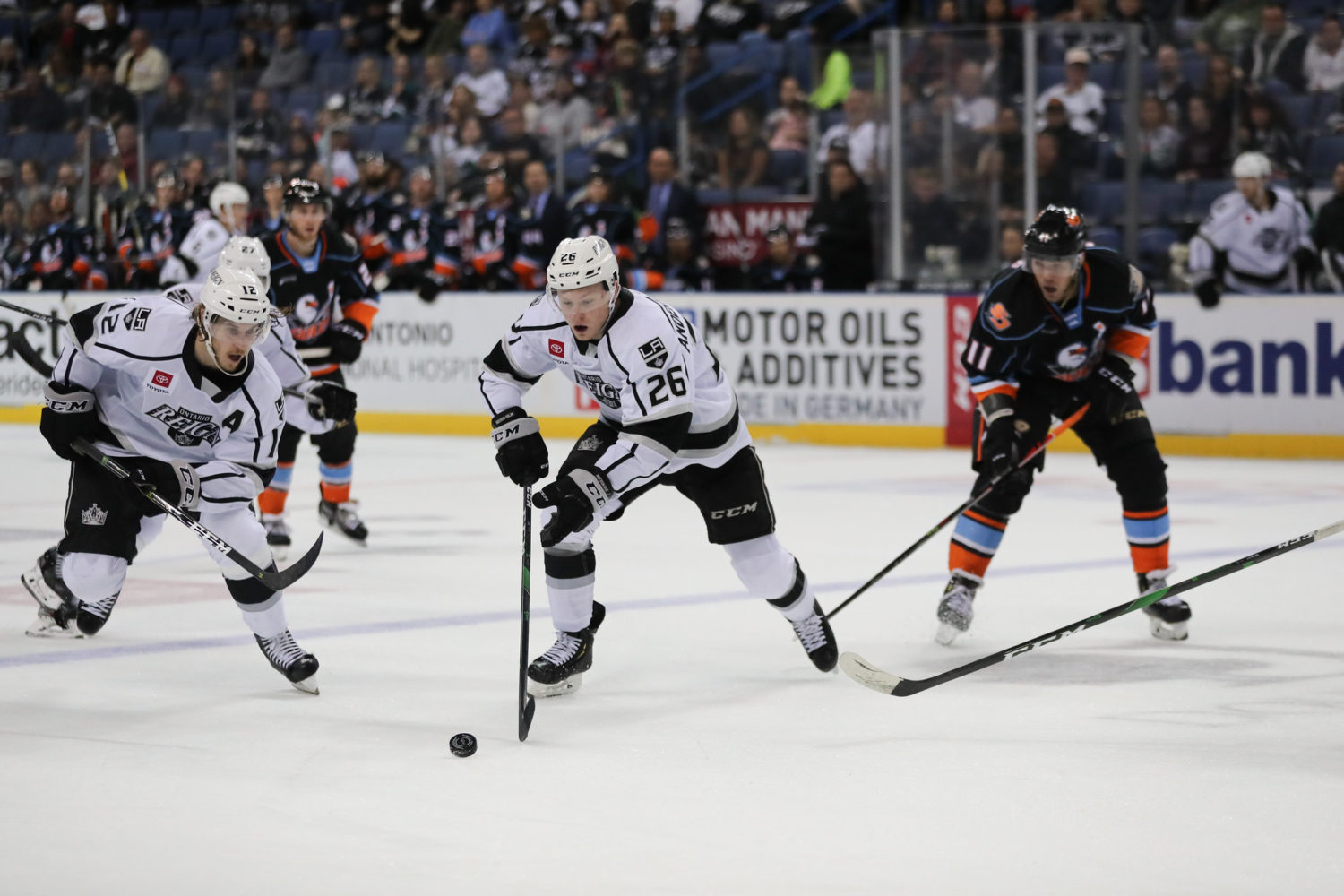 The Ontario Reign turned in one of their more complete efforts of the season, as they skated to a 3-2 victory over the San Diego Gulls, capping off the week with three wins from three games and pushing their record on the season to 6-1-1.

The Reign took leads of 1-0 and 2-1 but left the final result until late, as Matt Luff scored for the third straight contest, tallying the game winner with less than five minutes to play in regulation. Jaret Anderson-Dolan and Tobias Bjornfot also scored for Ontario, while Carl Grundstrom added two assists and goaltender Cal Petersen earned his league-leading sixth win of the season with 30 saves.

The Reign opened the scoring inside the game’s first minute, as Anderson-Dolan tallied for the second time in as many nights with the game’s first goal. After a San Diego power-play goal from defenseman Chris Wideman tied the game at one, Grundstrom sprung Anderson-Dolan and Bjornfot on a 2-on-0 rush, with the former feeding the latter for his second goal of the season.

San Diego tied the game through forward Antoine Morand in the second, which set the stage for a dramatic third period, that felt like it had added implications despite being just an October regular-season game. As Mario Kempe fed Luff in the slot, with the third-year winger burying past Anthony Stolarz to keep San Diego winless on the season, an emotional victory was completed for the Reign, and a well-deserved one at that.

Ontario continues its reign atop the Pacific Division and finishes the month over October with just one regulation loss, just one year after it finished the same month with just one victory. A much sweeter start to the season, for a team that feels like its best hockey is still to come.

Mike Stothers on the Eyssimont – Sutter – Luff line contributing in all facets of the game
They’ve been good. They bring a little bit of everything to it, I mean, they play hard, they forecheck well and there’s guys that are capable of finishing too. Sutts sets the tone for that line, as he does for our team and it just feels like right now, Luffer, Sutts and Icey are clicking together, so we’ll leave it like that, no sense changing it.

On if it feels like the two wins over San Diego were two off the more complete games the Reign have played this season
I think so and I think it’s a better indication of what we’re trying to get accomplished. Sometimes it takes a while and I’m not saying that we’re over the hump by any means, we can very easily take a couple of backwards steps too if we deviate from what we’re trying to do. I think we’ve got some good buy-in from everybody, they’re willing to try different neutral zone setups, different forechecks, a little bit different in the d-zone. Again, you can say whatever you want, but Cal was outstanding again tonight. We really value the importance of a good goaltender.

On if there was ever a doubt of not playing Cal on the third game in four nights
Why does he need a rest, everybody else has to play, that’s a valid question isn’t it? Everybody says “oh, well they can’t play back-to-backs”, why, everybody else does. You know who it was started by, goalie coaches. Play him, play him until he tells you he can’t play anymore, especially when he’s playing this well. Glenn Hall played 600 games in a row and he’s still kicking around, had a pretty good career, I think he’s in the Hall of Fame. Back in the day, you didn’t even know who the backup goalie was. Who was the backup goalie for the Philadelphia Flyers when they were winning Stanley Cups behind Bernie Parent? Bobby Taylor. You know when he started? Never. Print it!

On Jaret Anderson-Dolan’s development over the first month of the season
As of the last couple of games, JAD’s been more of what we’ve been expecting. Maybe it was a little bit of a slower start for him, as it has been for a couple of these guys. I’ve said it before and I’ll say it again – These kids, that come out of juniors, out of college, over from Europe, everybody thinks they’re going to set the world on fire, they find out when they get there it’s a very challenging league. The American Hockey League is a league full of good players. It’s full of guys that are just a hair away from being in the NHL, they’re playing against men, so sometimes it takes a little bit of time. I think we’ve seen some good growth out of JAD the last couple of games and he’s wanted the added responsibility, he’s wanted the extra ice time, but he’s deserved it. We’re not in the habit of just giving it out, people have to earn it and that’s why the Kings won a couple of Stanley Cups a few years ago. They had guys who were willing to earn it and they were successful because of it.