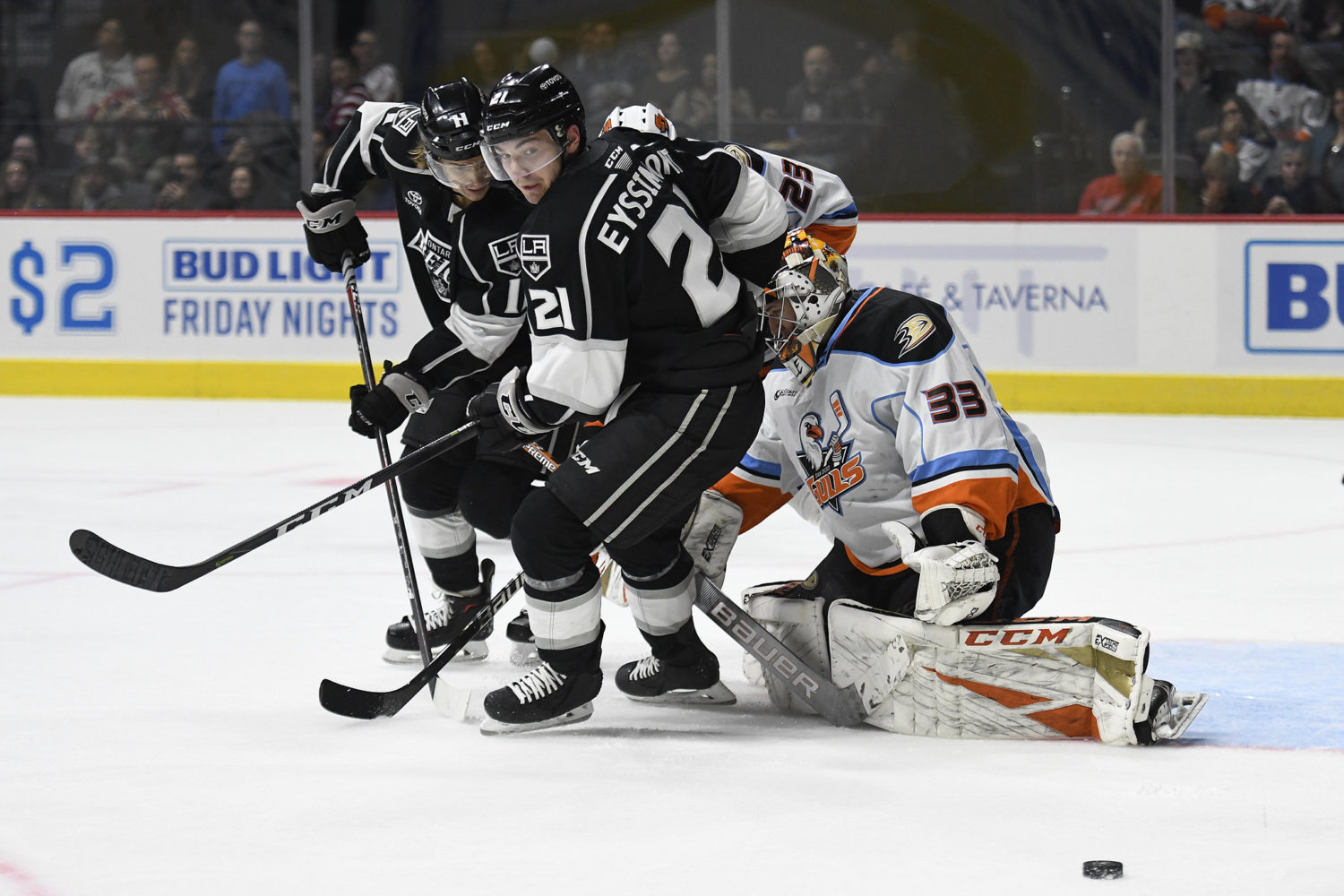 TONIGHT’S MATCHUP: The So-Cal Series is back! Ontario heads to San Diego tonight for the first of two games this weekend between the Reign and Gulls, with a rematch scheduled for 6 PM tomorrow evening at Toyota Arena.

WHAT TO WATCH FOR: The Reign are expected to use the same lineup that took the ice on Wednesday in Bakersfield, which is also the same 20 that skated on Saturday in San Jose, though there could be some shuffling amongst the forward lines. Cal Petersen was the first goaltender off this morning, while Chaz Reddekopp, Jacob Doty and Drake Rymsha were on late for extra work.

CALVIN AND HOBBES: Ontario goaltender Cal Petersen was in form against Bakersfield on Wednesday, as he stopped 35-of-36 in the 2-1 victory. Petersen was especially sharp in the first period, when he made 18 saves on 19 shots against. Petersen currently leads all AHL goaltenders in minutes played (345:59), shots faced (220) and saves (206), and is also tied for the league lead with four wins.

LADUE’S AND DON’T’S: Reign defenseman Paul LaDue scored his first goal of the season, the game-winning tally, in Wednesday’s win over Bakersfield. LaDue’s shot from a sharp angle snuck past Condors netminder Dylan Wells late in the second period to put Ontario ahead 2-1. LaDue was also a constant on the Reign PK and he skated the entire 1:55 on a 5-on-3 kill. Read more on LaDue’s game on Wednesday here.

YOU JUST LUFF TO SEE IT: Ontario forward Matt Luff also scored his first goal of the season on Wednesday, which tied the game at one late in the middle stanza. Luff had been creating chances on a nightly basis leading into Wednesday’s game and leads all Ontario players with 16 shots on goal this season. Overall, Luff has collected three points (1-2-3) from five games played with the Reign on the 2019-20 season.

BLUEBERRY RAS: Reign forward Rasmus Kupari collected an assist on LaDue’s goal on Wednesday, giving him points in back-to-back games and four points (1-3-4) in total from six games this season. Kupari now ranks second on the Reign in assists this season and is tied for third in points (4). Kupari and teammate Mikey Anderson (2-2-4) are tied for seventh in the AHL in rookie scoring.

PHILLY CHEESE: Ontario announced a roster move this morning, with defenseman Markus Phillips being reassigned from the Reign, to the ECHL’s Fort Wayne Komets. Phillips made his professional debut with Ontario on Saturday, October 12 against Tucson, in his only action of the season to date. Phillips joins the Komets in advance of a back-to-back this weekend, where he could make his ECHL debut alongside Matthew Villalta.

SCOUTING THE GULLS: San Diego is still in search of its first victory on the season, but forward Kiefer Sherwood has starred for the Gulls nonetheless, with four points (2-2-4) from his first four games this season. Forwards Jack Kopacka (1-1-2) and Daniel Sprong (1-1-2) also have multiple points this season. Goaltender Anthony Stolarz has been the workhorse in net, having started three of the four San Diego games this season.