Same lineup; possession vs suppression; how does rivalry evolve with Blues’ Cup? 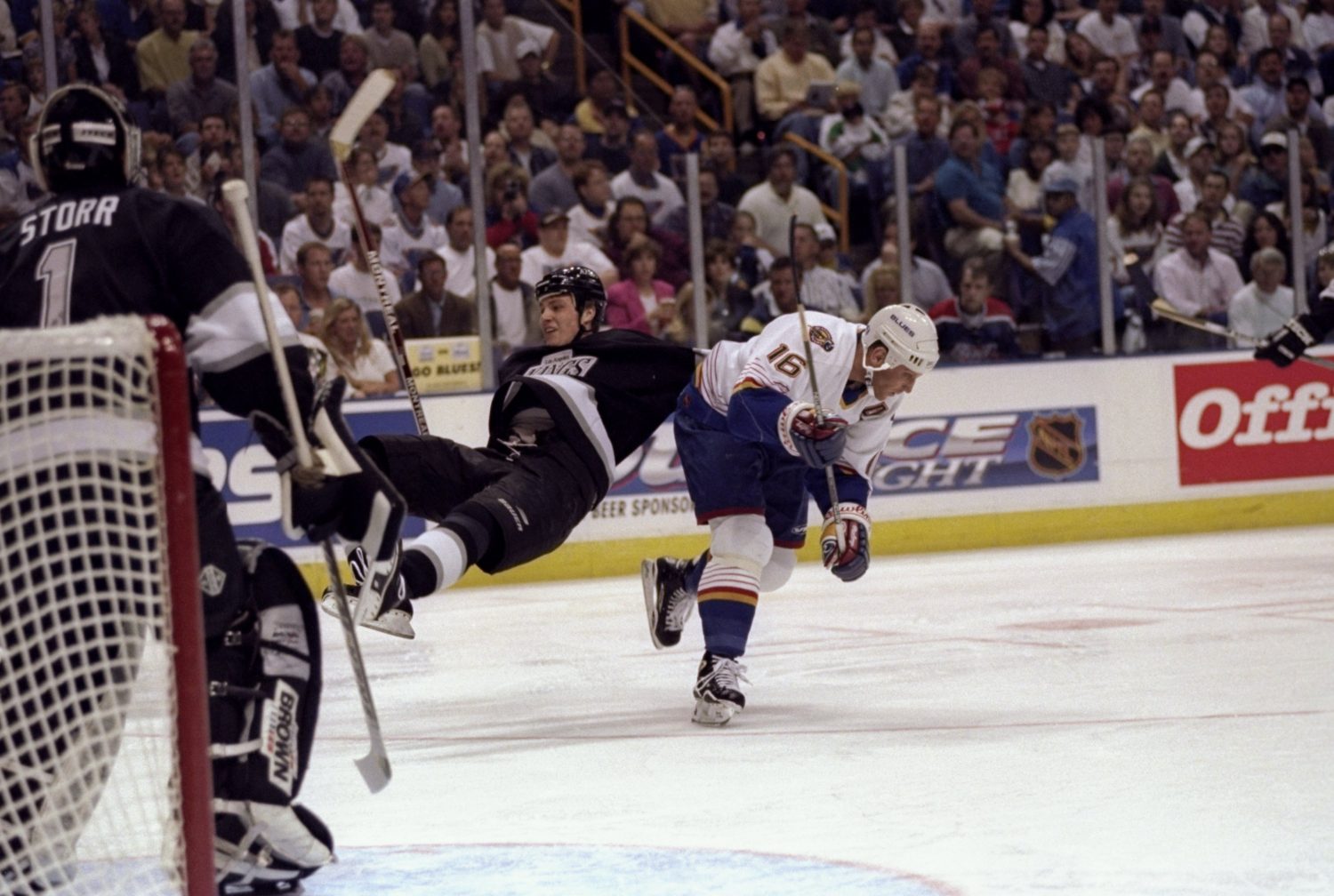 The LA Kings face the defending champion St. Louis Blues at Enterprise Center tonight (5:00 p.m. PT / FOX Sports West / FOX Sports GO / LA Kings Audio Network). Today’s skate was optional, but because Jack Campbell remained on the ice with Nikolai Prokhorkin and Joakim Ryan, Jonathan Quick is projected to start against St. Louis – against whom he’s 9-13-3 with a 2.47 goals-against average, .913 save percentage and three shutouts in 25 career regular season games – with the following lineup in front of him:

— Their vitals: Jordan Binnington, who yesterday flashed us a peace sign from his truck while ascending the Enterpise Center loading dock as we descended it, will start in goal. Midwestern hospitality! Thank you, Jordan. He lost his only career start against Los Angeles, a 4-3 Kings home win in which he stopped 25 of 29 shots in a matinee that preceded last season’s bye week. Also:

— The halcyon days of the Kings-Blues rivalry might not be described as such from the home team’s dressing room, given that the two series won by Los Angeles – particularly the 2013 series, which opened with two St. Louis home wins – left a poor taste in a proud group’s mouth.

That has since been absolved with a Stanley Cup win. Because of the Kings’ own triumphs earlier this decade, there aren’t as many fists shaken in the direction of Craig Muni, Patrick Roy and so on. The same goes for their 1967 expansion brethren.

Speaking with Jonathan Quick after Wednesday’s practice, the roles are the same. This will be a difficult game between veteran teams, as is the norm when visiting Mound City.

“Every time we come in here we expect a hard game,” he said. “For the past decade, that’s the type of team they’ve been. They’ve been a really great team. I’d say 10 years, they’ve been a playoff team maybe nine of them. We know what to expect coming in here. Whether they won last year or now, we know it’s a tough game [Thursday].”

And so it should be another typically tight game between a pair of teams that have built success off their checking and can play a grinding, physical possession game. That may evolve year-over-year, and even several years ago, Alex Steen had spoken about the Blues’ efforts to integrate more speed and skill into their lineup. But the last two teams to win Stanley Cups were heavier teams that won playoff series similarly to the Kings’ methods earlier this decade.

“Everybody says that the league’s changing to the small, skilled players, but then they come out and beat the [apples] out of everybody,” Jeff Carter said. “Everybody thinks they know where it’s going, but no one really knows.”

The Kings won last year’s season series, including the sole game at Enterprise Center, after which the Blues parted ways with former coach Mike Yeo. They’re 4-5-2 in their last 11 head-to-head meetings, which followed a stretch in which Los Angeles had won 19 of 24 regular season and playoff matchups.

“Obviously, I think when you play the defending Stanley Cup champs you expect to bring your best game and I think they expect to get the best game from whoever they’re playing. Good challenge for us,” Carter said. “We always seem to play pretty well here, so hopefully we can win.”

That was pretty much in lockstep with Todd McLellan’s evaluation. The context of the game that truly matters for the visitors is that they’re looking to build off a good performance in Winnipeg that began the trip and gain stock of the advances they’ve made.

“For us, or for the staff, anyhow, this game comes at a good time for us because I think we’re starting to put some things in place, and we may as well test it against the best,” McLellan said. “We have enough players in our locker room that have won championships and remember it, and they know how the opposition prepared for them, and we don’t want to disappoint the Blues tonight. We want to give them our best game as all the teams are going to do this year. When you’re champions, they prepare for you, so I’d like to think that we can deliver on that and then we can evaluate where we stand against the best.”

— Some interesting opposing forces tonight. Los Angeles leads the league in shots per game and shots-for percentage and ranks second in Corsi, while St. Louis is coming off a well-executed 3-1 win over Colorado in which they limited the offensively gifted Avs to only 10 even strength shots on goal.

The Blues’ shots-for percentage is marginally in the red and their raw possession rates aren’t great early in the season, but they also have a healthy 8.7% five-on-five shooting percentage. Part of these trends reflect their desire to maintain possession of the puck down low and favor puck movement that leads to scoring chances rather than raw shot volume, as it was described by a member of the media.

“Well, they also lead the league in O-zone faceoff wins and O-zone time. That for me alone is shot suppression,” McLellan said. “There’s no taking a shot from your crease at Binnington, it just doesn’t happen. For us to suppress their share and to work on earning our opportunity in the offensive zone, it’s going to have to start our blue line in in the faceoff circle. This team, in my opinion, the Blues check to win and they have all four lines that are willing to do it. Their skill players lead the way and they won a Cup because of it. We’re going to get what we need right now, I think, as a team. We’re going to get tested, we’re going to get pushed, and we’re going to get a good evaluation tool to move forward.”

It led into a discussion on “physicality,” an abstract that’s difficult to define and doesn’t rely solely on pure, blunt force.

“You go back to when Panger was playing, it was just running guys through the end wall and fighting,” McLellan said. “Now, it’s shot blocking, it’s battles in the faceoff circle. I think Blake Lizotte’s one of our most physical players, and he’s small but he’s got a tenacity to him, he strips pucks, he gets body position. That’s physicality.”

— You may have seen this on social media yesterday, but Carrlyn, Daryl and I made a trip to Cahokia Mounds on Wednesday, one of only 24 UNESCO World Heritage Sites in the United States. An area home to roughly 20,000 people when the native population peaked between AD 1050 and 1200, Cahokia was settled around the year 700 and became the largest pre-Columbian civilization in the Americas north of what’s now Central Mexico. The “mounds” are in reference to the massive, pyramid-like structures constructed out of mud and clay that today serve as the park’s most recognizable attractions. Monk’s Mound is the largest.

There are sports tie-ins! First off, Jay Varady, a good friend from our Everett Silvertips days, is the head coach of the Tucson Roadrunners and is a native of Cahokia, Illinois, a town some 10 minutes south of the mounds that borders East St. Louis. Secondly, and more importantly (sorry, Jay), there were fairly advanced athletics and competition that apparently led to sports betting. One of those sports is Chunkey, which we’ll talk about during the second intermission of today’s broadcast. Several pics are below; we hope you’ll stay tuned in!

— Tonight’s officials are referees Gord Dwyer and Justin StPierre and linesmen Scott Driscoll and Jesse Marquis. Thanks for reading, Insiders. Puck drop is nigh. 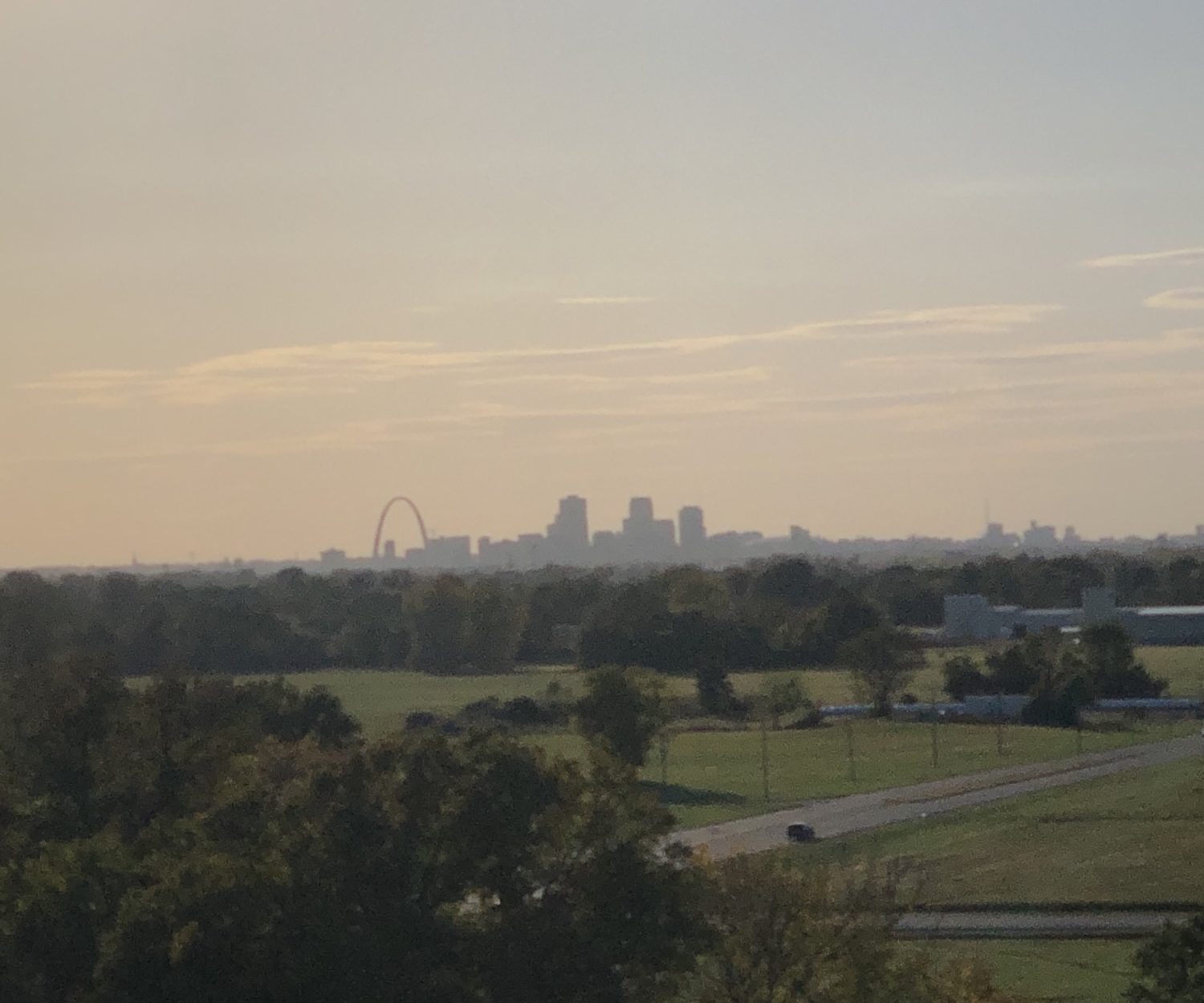 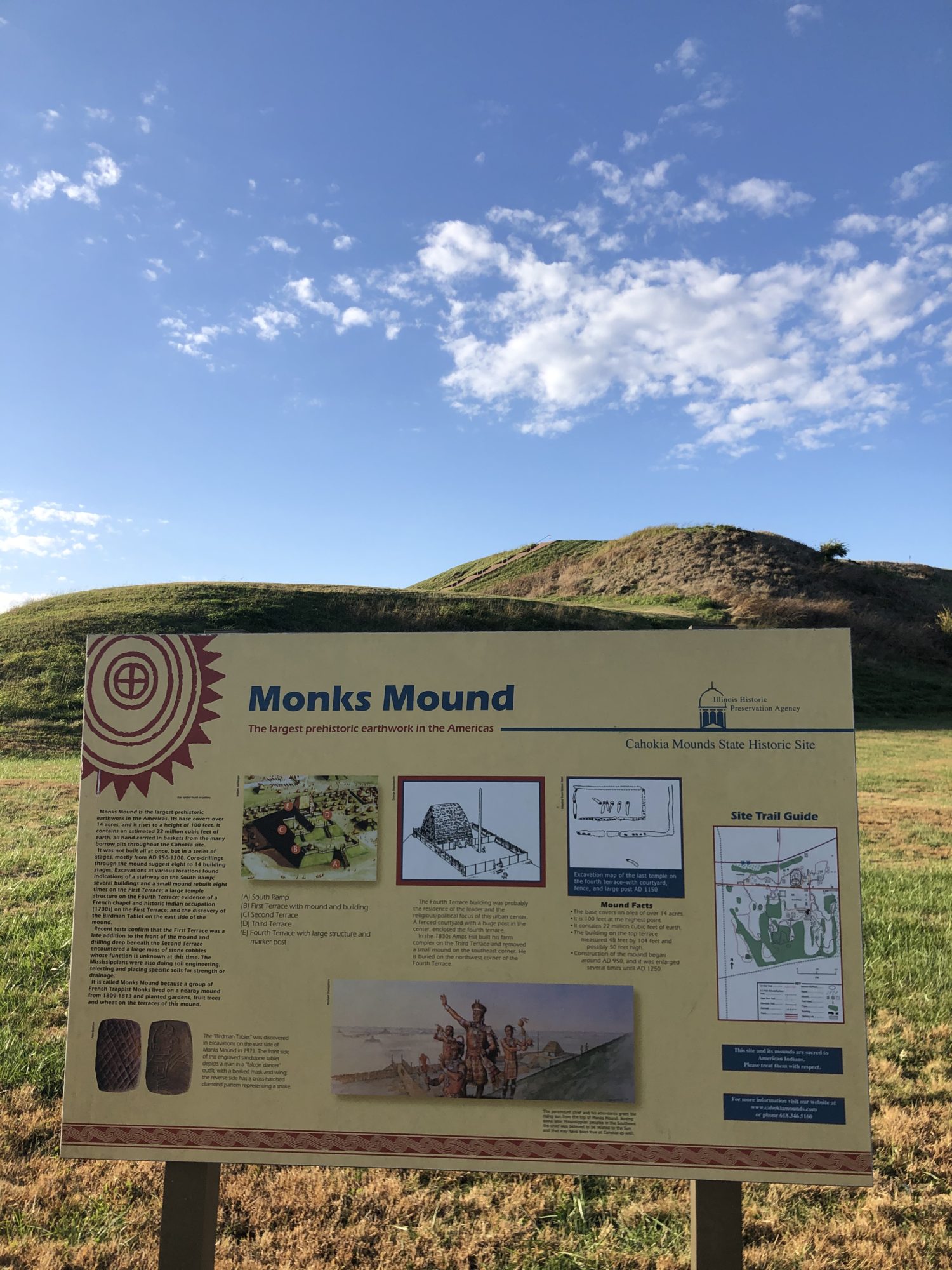 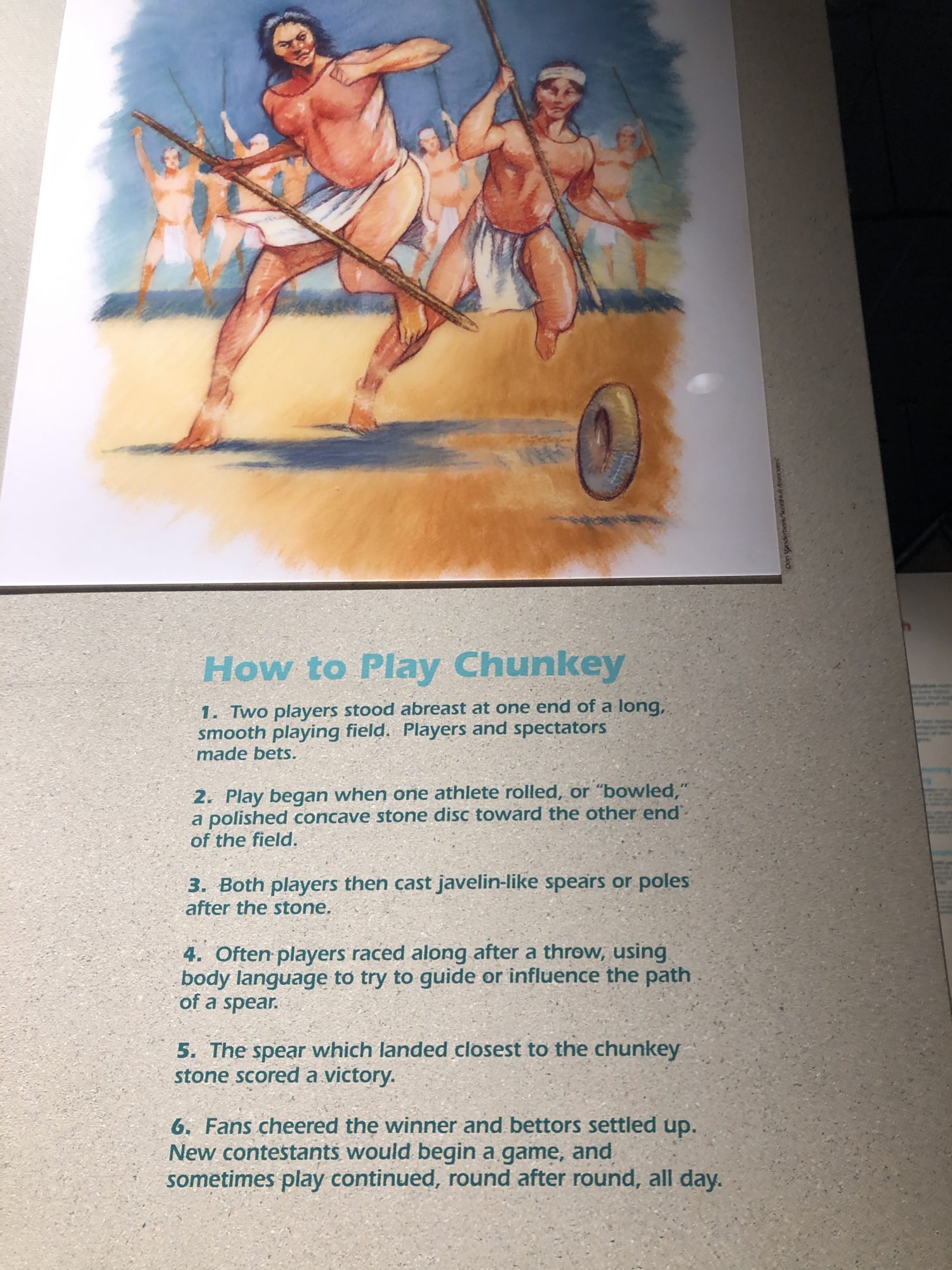 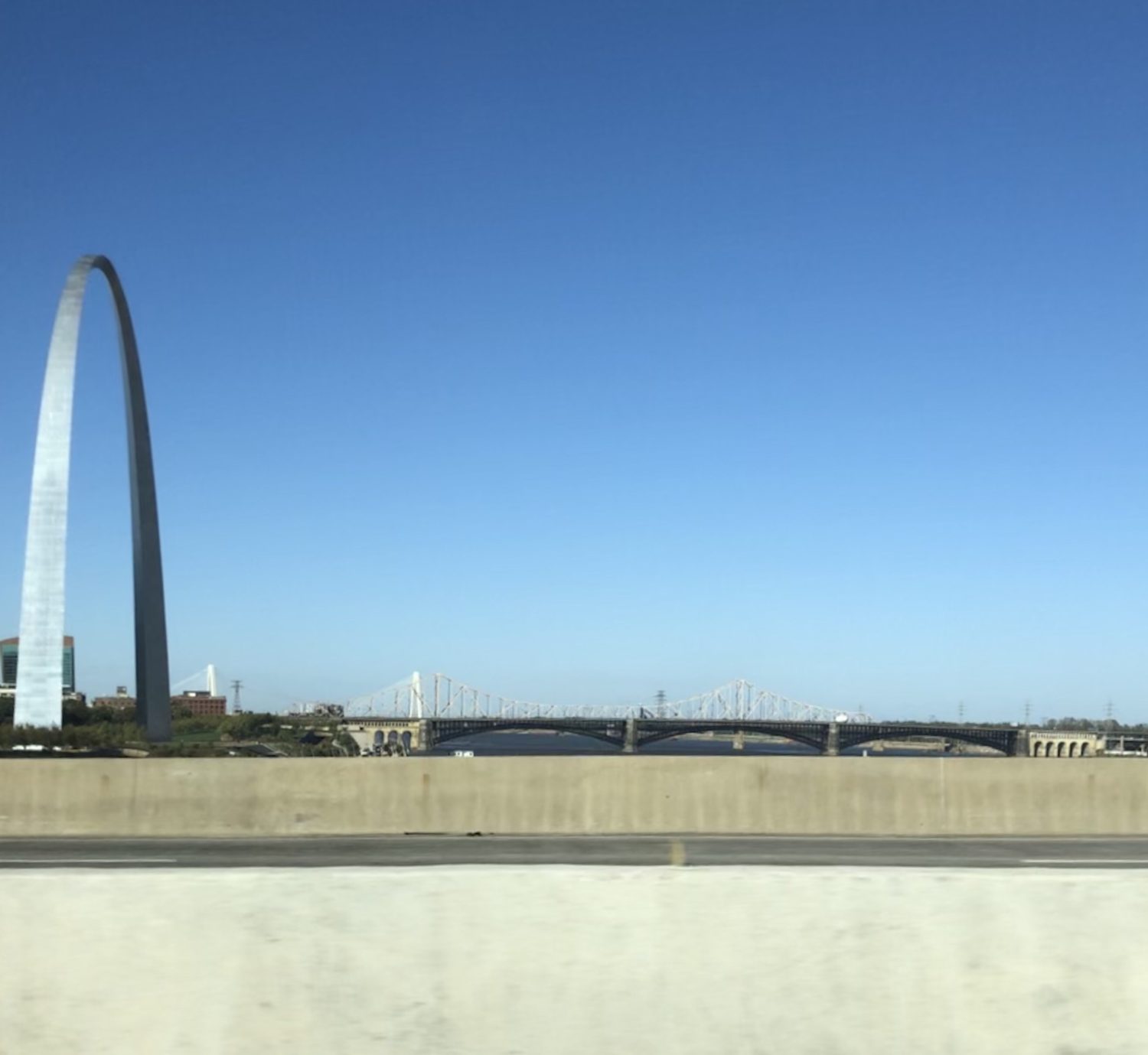 Have been going to St. Louis for a long time and finally, FINALLY made it to @cahokiamounds. Amazing time with @carrlynbathe and @darylevans15 learning about the @unescoworldheritage site – one of only 24 in the United States – that at one point was home to 20,000 people, making it the largest prehistoric civilization north of whats now central Mexico. The Mississippi River is magic. Will share a bit more during Thursday’s broadcast and points beyond.