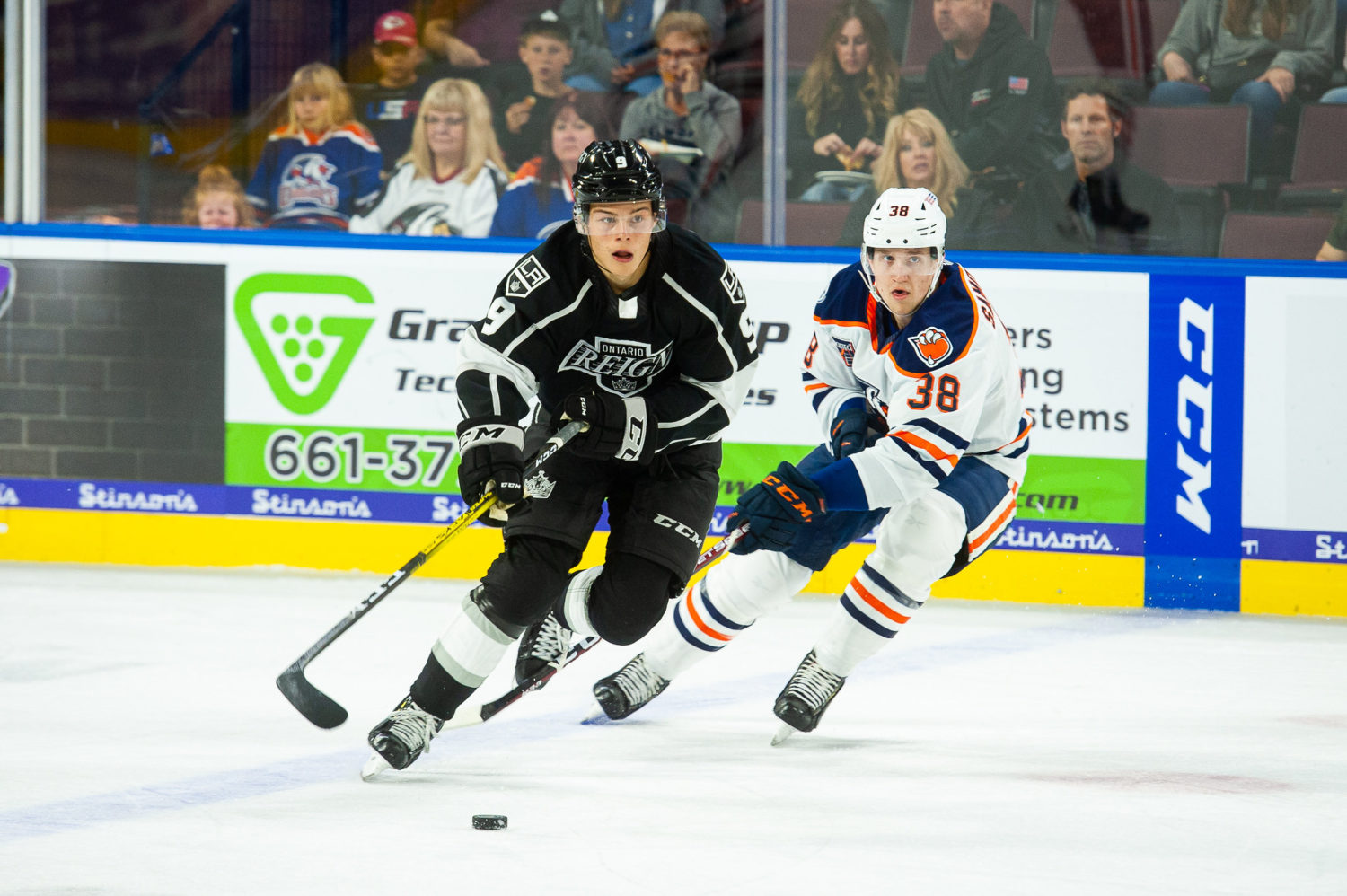 TONIGHT’S MATCHUP: The Ontario Reign begin a three games in four days stretch this evening, with their second trip of the month to Bakersfield. Ontario enters tonight’s action off of a 5-2 victory on Saturday afternoon in San Jose.

WHAT TO WATCH FOR: The Reign welcomed forward Carl Grundstrom and defenseman Tobias Bjornfot to the lineup on Saturday in San Jose, as both made their AHL season debuts. One lineup alteration to expect is in the goaltending tandem, with Cole Kehler reassigned to Ontario on Monday and Matthew Villalta reassigned to Fort Wayne, though Cal Petersen was first off this morning. Ontario visits Bakersfield for the second time this month, following a 3-2 overtime win for the Reign on Saturday, October 5.

BJORN STAR: Reign defenseman Tobias Bjornfot was impactful in his AHL debut on Saturday, as he scored his first career professional goal, a first-period PPG, and added an assist in the 5-2 win. With his goal, Bjornfot became the first player born in the 21st century to score a goal in the AHL. Earlier this month, Bjornfot became the fifth younger player in Los Angeles franchise history to appear in a game for the Kings, when he made his NHL debut on October 5 in Edmonton.

FRK’N FIVE: Ontario forward Martin Frk collected his first multi-point game of the season on Saturday, which extended his scoring streak to five games to open his first campaign with the Reign. Frk has totaled six points (4-2-6) from five games played, tied with forward Mario Kempe for the Reign lead in points on the season. The Czech Republic native is tied for seventh in the AHL in goals scored and 11th in penalty minutes.

HOME GRUN: Reign forward Carl Grundstrom also collected two points in the win over San Jose, as he scored twice on Saturday. Grundstrom announced his return to the AHL with a first-period tally, followed by a late empty-net goal. Grundstrom skated in 13 games a season ago with Ontario, collecting 10 points (3-7-10) and has totaled seven points (5-2-7) from 16 NHL games with the Kings over this and last season.

THE COLETENDER: The Reign added goaltender Cole Kehler to the roster on Monday, after he began the season with the ECHL’s Fort Wayne Komets. Kehler posted a 2-1-0 record with Fort Wayne, along with a 3.37 goals against average and a .901 save percentage. Kehler was on the Ontario roster a season ago, as well as the Kings roster, but did not appear in an AHL or NHL game.

INJURY UPDATE: The Reign welcomed defenseman Sean Durzi back to the ice this morning, as he skated with the team for the first time since Opening Night on October 4. Durzi had been deemed “week-to-week” with an upper body injury, which he suffered in the 5-0 victory over San Jose. Durzi skated this morning in a non-contact, red jersey, the next step for the rookie blueliner in returning to the Ontario lineup.

SCOUTING THE CONDORS: Bakersfield has been paced offensively by forward Brad Malone, who leads the team with six points (1-5-6), along with forwards Kailer Yamamoto and Josh Currie, who has each tallied four goals on the season. Forward Tyler Benson, who has five assists from five games played on the season, led all scorers in the Ontario – Bakersfield matchup last season with 15 points (5-10-15) from 10 games played.