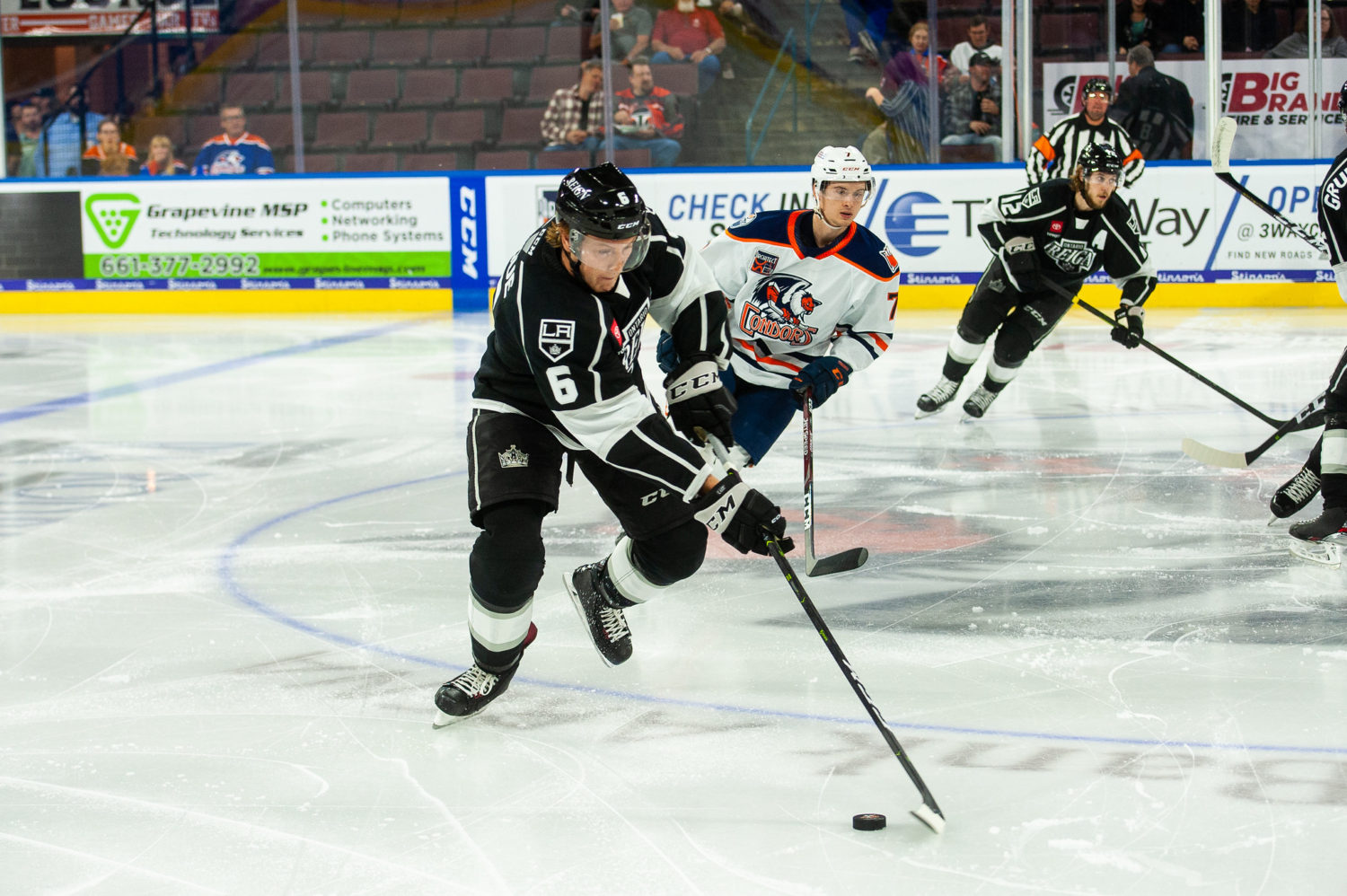 It was a tale of two Ontario Reign teams tonight.

The first team, which started the game, was pinned in their own end, with the play of goaltender Cal Petersen keeping the scoreline at a 1-0 game. Ontario was outshot 18-3 in the first period. Then, earlier in the middle frame, the Reign took a pair of penalties, in a five-second span, that put them shorthanded, two men down, for nearly a full two minutes.

The unit of Mikey Anderson, Paul LaDue and Brett Sutter killed off the majority of the infractions, with a couple of crucial blocks in that sequence, and the Reign turned things around from there. Ontario got a pair of goals, from forward Matt Luff and LaDue less than 30 seconds apart to turn a 1-0 deficit into a 2-1 advantage that they would not relinquish down the stretch.

It wasn’t pretty at times – Ontario went 19:25 without a shot on goal in the first period and, as aforementioned, got a stout performance from Petersen to keep the deficit to just a single goal until things got going. The pair of timely goals were both gritty goals, with Luff’s coming on a third effort in front and LaDue’s coming from a sharp angle from the right corner, that forward Carl Grundstrom appeared to help will over the line in front. In the third, Petersen helped slam the door shut as he stopped 35-of-36 in total on the evening, as he moved his personal record, and the Reign’s overall record, to 4-1-1 on the season.

At the end of the day, the Reign have points from five of their first six games, which has them at nine points in the Pacific Division standings. The group knows it’s relied on goaltending too much in the first six games, but has also shown glimpses of a team that can create chances and control the game at times too. Tonight featured both of those teams, and fortunately for the Reign it ended with two points and a second win from two trips to Bakersfield this season.

Ontario is back in action this weekend, with a home-and-home set against San Diego, beginning on Friday evening at Pechanga Arena.

Hear from #Reign forward Matt Luff, who found the back of the net in tonight’s win! pic.twitter.com/5kEPrTsNzJ

Paul LaDue on the massive 5-on-3 PK in the second period
Yeah, I think that kind of turned things around for us. Obviously we didn’t have the start we wanted, gave up way too many shots and Cal kept us in it. That 5-on-3 kind of gave us the boost we needed and after that, I thought we dominated play and that’s how we need to play going forward.

On if that second half was encouraging, to see how the team can play when on their game
For sure, and we’ve had glimpses of it in the first [six] games, but we haven’t played a full 60 yet. We know how to play, we know we’ve got to get pucks deep and get on our forecheck, but we’ve just got to put it together for a full 60.

On getting his first goal of the season, tonight’s game-winning goal
It’s about time. It was a good play by Kempe, Carl did well up front to distract the goalie I think, but yeah for sure, it feels good.

On if he feels he’s getting his legs under him, after his injuries before the season
I’m feeling better and better each game, so I’ve just got to keep working, keep moving forward and keep getting better.

On Cal Petersen’s play when the team got off to a slow start
It’s incredible, he’s been lights out all season. We’ve got to work on helping him out a little bit, because it’d be tough to keep up what he’s doing for 65 games, but we trust him and he’s been coming up big for us.

Mike Stothers on the 5-on-3 PK in the second period
Huge kill, because of a couple of blocked shots – one by Sutter and another by Anderson. That’s crucial for a successful PK. But once again we brought this on ourselves by neutral-zone turnovers, puck ends up in your end and you take a penalty, then the puck goes over the glass for a second penalty. Both those penalties don’t need to happen if we keep the puck moving north

On Paul LaDue’s play tonight, on the PK and overall
Laddy led our team in total time on ice and five minutes of it was while shorthanded. He did a hell of a job for us tonight, best game I have seen him play in a long while. The reason it has been so long is because of the injury bug. He has had to battle thru some nagging injuries that are not bad enough to keep him out of the line up but annoying enough to affect his play but he has been feeling real good of late and that’s the way I know Paulie can play.

On Matt Luff generating chances and getting his first of the season tonight
Luffer has been shooting the puck, he just wasn’t finding the mark. Tonight, with great determination, he scored a big goal for us. He is a sniper and eventually they find a way to produce. He is feeling real good on the ice right now so I am sure there will be many more to follow.

On the team’s over-reliance on Petersen early tonight, and working towards playing a full 60 minutes
Cal likes to start practice with about 20 – 30 shots from Luffer before we officially begin the entire team practice. So we are just carrying it over into the games. Let Cal get a good feel of rubber early and then we wait for him to give us the nod that he’s had enough. We will bring it up again before the next game Dools, for at least the seventh straight time.