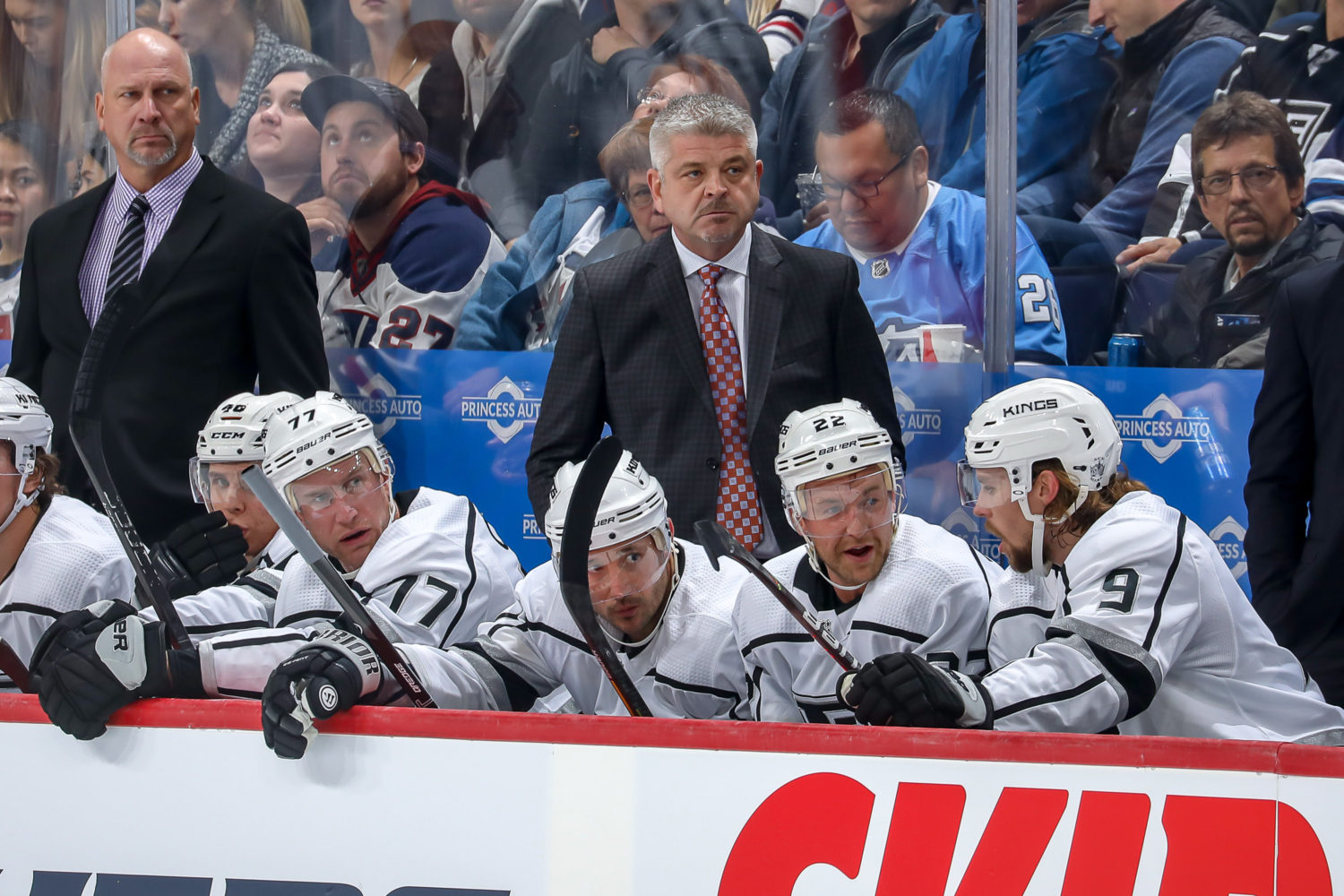 Todd McLellan, on the team’s recovery after the second period:
Well, we needed a break, first of all, and we needed to get out of the penalty kill situation. Really, really happy with the start, and then for about eight of the 20 minutes in the second period, we played shorthanded. It wasn’t like we were getting swarmed, but we lost a lot of players at that time. Legs got stiff, momentum was lost, rhythm in the game was lost. It tired some players out because they penalty killed so much and the game changed at that moment, so what can we do to fix that? I think there were some penalties that we didn’t need to take, and there were situations that we put ourselves in where we had to take the penalties. So, we’ve got to clean some stuff up. We’ve got to find a way to establish momentum, and we’ve done that most nights, and maintain it. Every night there’s something different that costs us that flow, that momentum.

McLellan, on the penalty kill:
The best penalty killer is the goaltender, and I thought Quickie was that tonight. He won some faceoffs, we were able to get clears, and then when we were tired and worn out, we stayed tight, we stayed compact and we got some sticks in some passing lanes, so we were fortunate that way. But that unit’s doing too much work on a nightly basis. We’ve got to cut some of the penalties back.

McLellan, on what he saw from Jonathan Quick:
We saw what we expect to see from him on a nightly basis. I was asked a question the other day by somebody in the media group, and the insinuation of the question was ‘you’ve lost confidence in him’ and I think my answer was ‘no, we haven’t.’ We believe in him, the team believes in him and he’s playing and practicing really well. If his practices had slipped and he wasn’t looking good there, then we’d be worried. But he was outstanding, and it’s showing up in the games now.

McLellan, on whether Blake Lizotte performing well against Winnipeg’s top players gives him confidence to play the rookie in more situations on the road:
Obviously he is a rookie – I don’t think of it that way. I just think I want to keep putting him on the ice. He’s hard to play against. There’s guys that are difficult to play against when they have the puck, and there are some that are difficult to play against when they don’t have the puck. He’s both, and I feel comfortable playing him in any situation against any line because I know he’s got a relentless attitude and he drags people into the game. That line’s been a very good line for us, and he plays a huge part of that.

McLellan, on dominating in shots on goal early:
Well, we got off to a good start. Our forecheck was established really quick. We earned a couple power play opportunities quite early in the game and we generated a lot of shots – I’m not sure if they were really good chances, but shots off of that – and the momentum just started to go our way. We gave one up late in the period – I believe it was late in the period – where they tied the game, and that set us back a little bit, and then we took some penalties and it allowed them to get back in the game.

Anze Kopitar, on his game-winning goal:
Just going in and seeing where the space is to go to the open ice. I just figured I’d try to back in and it worked out.

Kopitar, on what has led to their regular shot advantages:
Just keep on putting shifts together, really. Usually if there’s a good shift, we follow it up with a second, third, fourth, and that’s where the shots are coming. Usually when you’re pressing, the other team doesn’t really have any juice to go in the offense. They kind of flip out the puck or some sort, and we come right back at it. We’re trying to be a direct team throwing a lot of stuff on net and create off that.

Kurtis MacDermid, on whether he had a sense that his shot had crossed the goal line:
It was just hard to tell. There was a lack of motion in the crease there. I wasn’t really sure. So, luckily it did end up going in.

MacDermid, on the team getting rewarded for strong play:
I think we’re just managing games better as we go along and we’re starting to learn how to do everything as the game goes on and keep pressure on and make sure we don’t let the teams back in. But when we do, we bear down and get the job done.

MacDermid, on what three 20-shot periods in nine games says about the team:
Just get on our toes right away right off the bat. It puts teams on their heels, and when we play our aggressive structure and stick to it, then we funnel a lot of pucks to the net and get a lot of chances, and it’s starting to reward us now.

MacDermid, on the bench celebration when his goal was awarded:
I was just happy to get the goal that went in for the guys. It was a bad penalty for me to take there, but the game kind of works in weird ways sometimes and I was just fortunate enough that it went across the line, so I was just happy about that.

Austin Wagner, on another high-shot volume game:
I think it goes back to being a straightforward team. We’re successful when we get a lot of shots and we hem them in the zone. I think our mentality is when we shoot it, we go and get it back, and that’s what we tried to do. When we get a lot of shots, you can see that they don’t always go in but it creates momentum and it hems them in their zone and makes them tired, and nobody really want to play in their own zone, so if we can hem them in, that’s good for us.

Wagner, on the team putting itself in position to win after Winnipeg answered with momentum:
We just battled. I think on that shift where we drew the penalty right at the end, we obviously didn’t get it out right away, but we ate it low and we worked hard and just battled in the corner and whenever we had a chance to get it out, we chipped it and all of a sudden we had a breakaway and drew a penalty. I think it was just battling and sticking with it. Not everything’s going to go smoothly in a game, and I think we know that, so it’s coming along really well for us, and now we’ve got to just go to work on other things and just keep getting better every day.

— With the win, Los Angeles improved to 17-8-8 all-time against the Winnipeg franchise, a record that includes a road mark of 7-6-4. These teams have two games remaining: November 30 at Staples Center and February 18 at Bell MTS Place.

— Mark Scheifele has one goal in 17 career games against Los Angeles, while Kyle Connor scored his fifth goal in his eighth game in the head-to-head match-up.