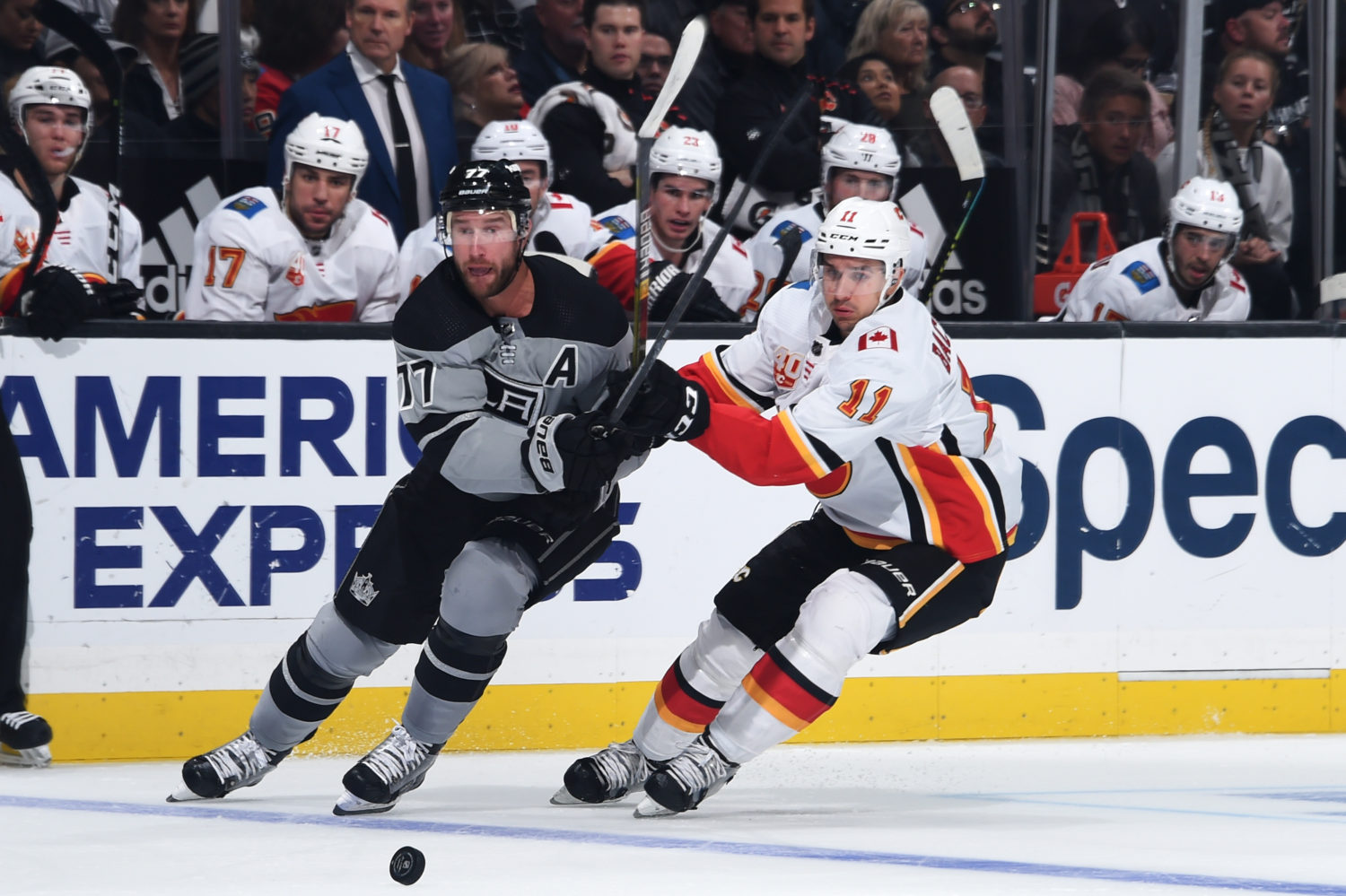 Todd McLellan, on ending the scoring drought early:
Yeah, if we were going to start a game, that’s the best way to do it. Broke out well against a heavy forecheck, went up the ice, really nice play by Toff, a great shot, and yu could kind of feel a little bit of relief on the bench, and then it was time to go back to work and the guys built off of it. We needed it. Finally got rewarded.

McLellan, on Jeff Carter:
He’s been snakebit Numerous chances, worked really hard for opportunity. Finally got rewarded for it. Probably should’ve had another one or two. You eventually get a little bit concerned about the guys giving what they have and not getting rewarded. Will they begin to cheat? Will they take shortcuts? Will they wander from the program to try and score, and they didn’t do that, so that’s a really good sign for our team.

McLellan, on the team sticking with their system:
It’s a good thing for our group. Not so much for me. It’s not about me. But we put a plan in place, and when they played to that plan, I thought for tonight, 52 minutes of it was pretty good. Then with eight minutes left in the game we get a double-minor or a power play, and we stray from it again. And that just means we’ve got a lot to learn still. I know the guys in that locker room, t he ones that won many years ago would’ve shut that game right down and put a clamp on it. So, we’ve got to get back to doing that. We still see old habits slip in, and ‘here’s a coach, we won four-[one], played a pretty darn good game and he’s finding a way to whine about a few things,’ but they’re things that have to be addressed and fixed.

McLellan, on Anze Kopitar’s performance and second period:
Yeah, that’s vintage Kopi, I think. Really strong defensively, powerful along the boards, strong through the middle of the rink and opportunistic. He read plays really well, broke plays up, had a breakaway and the puck rolled on him, so didn’t get the reward there, but sticking with it was nice to see.

McLellan, on what the win does for Jonathan Quick’s confidence:
He never has lost his confidence. Nobody has lost any confidence in him, so that’s always been there. But this is a nice reward for him, as well. He made some really good saves. I’m disappointed that we couldn’t clean things up a little bit down that last seven or eight minutes so we could reward him properly, but he did what he needed to do tonight and he looked really good in the net, so we’re happy for him.

McLellan, on whether he expected a Doughty-Tkachuk flare-up:
Not necessarily. I didn’t think it was that much. Anybody who watched hockey 15 or 20 years ago, that happened every shift. There’s not much there. Contact, guys fall on top of each other, a little bit of a scrum and move on, so not a big deal.

McLellan, on the importance of so many players factoring into the scoring:
It’s important. For us today, the scoring was great, but we checked better today than we did in the first period the other day. The last couple games, Buffalo, Carolina, we checked better in the first period, and that allowed us to play with the lead. We haven’t done that very often. But to have different scorers hit the sheet is a good thing for our group. [Reporter: Is that especially true with the Lizotte and Toff, Carter line that you talked about – them getting rewarded for doing things right tonight?] Yeah, they played really well. For the most part they’re doing things right. They’re creating numerous chances and coming back to the bench empty-handed. Tonight, they finally got it, and they’re creating a sense of chemistry on the ice. They know where each other’s going to be. They read off each other well, so if we can keep the Kopi line going, we can keep the Lizotte line going and build on the other two, then maybe we have something.

McLellan, on whether this was their most complete game of the season:
We were pretty solid, one through 52, and then just a little bit at the end where it wandered and it got away from us. Sure would like to have those eight minutes back again, and we’re always looking for perfection, we’re never going to find it because there’s no such game as a perfect one. As you build momentum, you don’t ever want to give anything back. You want to stay at that upper level and build off of it. I thought we gave it back just a little bit tonight.

McLellan, on the importance of breaking through offensively:
Big. Not necessarily for me, but for the guys. We use that cliché – whoeverwas around yesterday – squeezing the sticks and a little nervous in and around the blue paint. Tonight they relaxed a little bit, and it was a veteran to start it. Toff made a really good move and had some poise around the net to find a hole. That’s what our veterans have to do. They have to lead the way and the young guys have to learn from it.

Jonathan Quick, on the team’s performance:
We played great. It’s a big win, a division win, so we’ll take the two points, we move on. We’ve got a tough road trip ahead of us here, so we’ve got to focus on that now.

Quick, on the penalty killing success:
I think we did a great job of taking away their main threats on the power play. They obviously have a few plays they like to go to that like really well, and we did a good job of taking that away. We were blocking shots, we were winning faceoffs. The PK was huge, especially in the first period.

Quick, on whether the team was “due” for an offensive outburst:
They’re a good team. Division game, we were able to get two points against them. It’s big. Like I said, we have a road trip coming up here that we’ve got to get ready for, and we’ll focus on that now.

Quick, on whether this was the team’s most complete game of the season:
I mean, we’ve only played eight game. It’s a win. We’ve got a few of them so far this year, and we’re looking to get more.

Quick, on Kopitar’s impact:
He’s made impacts in all the games so far. He plays his game, he’s one of the best in the world and he does some impressive stuff. We’ve kind of grown accustomed to it, so it seems natural at this point, you know?

Kyle Clifford, on whether the team was due for an offensive outburst:
You know, I thought last game, we obviously got a lot of scoring chances, but what we talked about as a group was just finishing the job. It definitely helps when you get one early. I thought as a group we did a lot better job tonight.

Clifford, on the quality of competition in the home stand:
You obviously want to measure up against the best teams, and we know that Calgary’s a good team and a division rival, so I thought we came prepared to play and played a full 60. That was the difference tonight.

Clifford, on the late-game animosity:
I guess it’s not a Calgary-L.A. game without a little brotherly love. It’s part of the game and it’s good to see. It was good to see Wags jump in there and do a good job. Doughty’s a big, tough, mentally strong person, so he can handle it. He lives off that stuff, so it’s good.

Clifford, on Mark Giordano’s leap into the pile:
I think he came over the pile pretty good. I don’t blame him. If I was in his shoes, I’d have done the same thing.

Bill Peters, on Los Angeles’ early scoring:
The first one, there wasn’t anything going on at all. We were watching the reload from out forwards, and it was a 2-on-2 as we were coming back hard in the neutral zone. That’s probably two shifts in. And then they score in their first shift in the second. So, that can’t happen.

Travis Hamonic, on when the game began to slip away:
I think our first was ok. It is a tough building and we were down one. It was probably in the first seven or eight minutes of the second period where the game got away from us. We need a better pushback from the group. And that’s everybody. We’ll go from there.

Matthew Tkachuk, on his encounter with Doughty:
It’s fine. We had a 3-on-2. It was the first time we had a 1-on-1 the whole night. I just let the puck go and was going to go engage with him and he was coming at me. He went low on me, but I don’t care. That’s how most guys hit me when they try to get me because shoulder-to-shoulder is a bit harder. It was fine.

— Mikael Backlund converted a third period penalty shot on Jonathan Quick, the first penalty shot goal against Los Angeles since Auston Matthews’ goal on November 2, 2017. (Matthews had two penalty shots in that game.) Beginning with Wayne Rutledge’s save on Norm Ullman’s penalty shot in Toronto on January 22, 1970, opponents have scored 15 goals on 56 total penalty shots. Quick has stopped five of the eight penalty shots he has faced in his career.