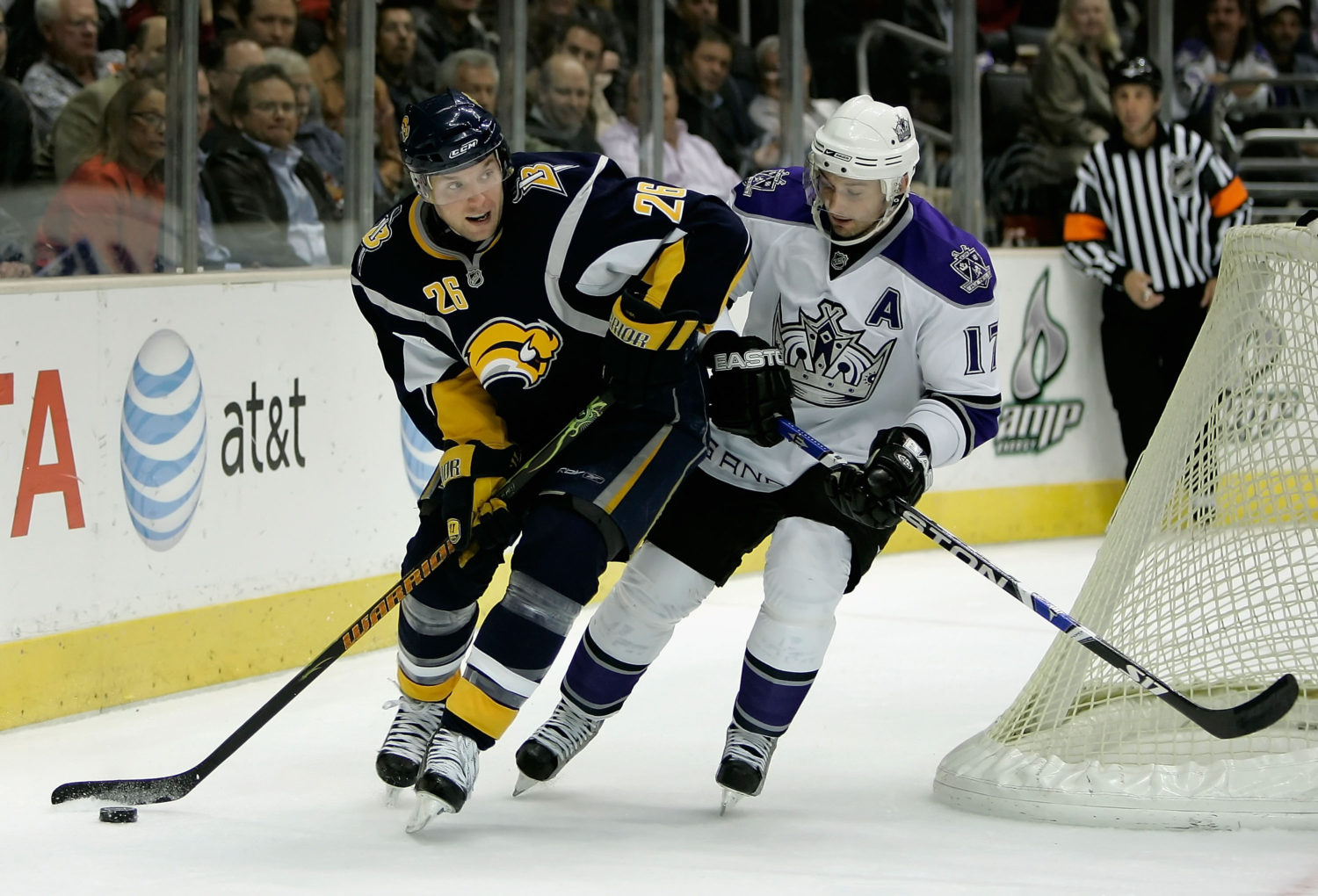 — No line rushes today. We’re assuming Tuesday’s lines will hold. As shared, Tobias Bjornfot, Carl Grundstrom and Kurtis MacDermid remained on the ice for extra work with Jonathan Quick and aren’t expected to play. Jack Campbell left the ice first at the morning skate and will face Buffalo for the first time in his career. Tyler Toffoli, who has perfect attendance since returning from a leg injury that caused him to miss 19 games midway through the 2016-17 season, will play his 200th consecutive game, the longest streak on the club behind Drew Doughty, who will play his 417th. Alex Iafallo will play in his 89th consecutive game, marking the third-longest active streak. With 896 career points (314-582=896), Anze Kopitar is four points shy of 900.

— After losing 5-2 in Anaheim last night behind Linus Ullmark, expect the Sabres to roll out Carter Hutton, 1-1-0 in three career appearances against the Kings with a 3.56 goals-against average and .889 save percentage. He’s grading well in 5×5 save percentage, high-danger save percentage and many other goaltending categories at 4-0-0 with a 1.74 GAA, a .931 Sv% and a shutout. Buffalo’s power play ranks second in the league at a crisp 35.7%, and rookie forward Frederik Olofsson, whose “sense of space” and ability to process decisions quickly were praised by Todd McLellan, is tied for the league lead with six power play goals. “They are a team that deserves to be where they’re at, and they’ll push us in every aspect tonight,” McLellan said of the 5-2-0 club.

The game also pits Anze Kopitar against 2016 Team Europe Head Coach Ralph Krueger, the two of whom nearly flew home from the World Cup of Hockey with a gold medal. McLellan described Buffalo as playing refreshed and with a lot of confidence, a notion that supported Kopitar’s recollection of playing for the… former Southampton F.C. chairman.

“He’s just a very relaxed guy, and I know him, we played in the World Cup, it’s two-week, three-week stuff, so that has to be a little bit more of a looser environment, a relaxed environment. You kind of don’t know what you’re getting into over the course of an 82-game season with training camp and all that. He thinks the game pretty well, he’s very positive and [I had] nothing but a good experience with him,” said Kopitar, who also praised Krueger as “a good talker, a good communicator.”

— McLellan downplayed whether the approach changes when facing a team playing the second night of a back-to-back. “We won’t tactically change anything, we don’t feel there’s a need yet for that,” he said of a team that’s outshooting opponents 84-43 in first periods but only outscoring them 8-7. He’s still looking for the team to come out and establish its “direct” game early, much as it has done this home stand.

McLellan was amused by the life of the Taylor Swift banner story, laughing as he denied responsibility. “I don’t understand any of that, I don’t know what’s going on, I can’t figure out how a banner can affect anything. Whatever they want to do – I have nothing to do with that.”

— I chatted with Ilya Kovalchuk, who praised Michael Amadio as “just a smart player overall.”

“It seems like he’s fast, but he’s fast, he’s strong, he’s smart and he sees the ice really well, so for the centermen, that’s important,” said Kovalchuk. There has been some pretty good chemistry at times between the two, and the Kings own 61.0% of shot attempts and 22 of 37 shots on goal when the two have been on the ice together at 5×5, but only two of six actual goals.

Kovalchuk liked their early partnership and the home opener but felt “the last few games we kind of slid back.” Both players have been productive, with Kovalchuk accounting for six points in six games and Amadio for two goals, three points and a dynamite on-ice xGF rate. Two of Kovalchuk’s four assists have come on the power play, while Amadio has generated looks on the manage without squeezing a point out of it yet. Both are on the team’s second unit, which started Tuesday’s game strong but was observed as “impatient” by McLellan as the game elapsed.

“Our power plays have got to be better, because that’s one of the parts of the game where you have to be better,” Kovalchuk said. “We didn’t score the last four games, so we worked on it yesterday and we were watching it today, so I know we’ll be better tonight.”

— There was more from Kopitar in the earlier Staples Center piece (and more on Staples Center’s history below). But in addition to speaking about Krueger and his memories of decking Dustin Brown after the empty-netter that sunk St. Louis in 2012, he also spoke on a number of contemporary L.A. topics, such as how the team was able to will out a strong defensive outing against Carolina. “Well, we certainly made a step in the right direction in the PK department,” he said. “Obviously, giving up three against Vegas, it’s not the thing to do and you’re not going to win very many games doing that, so we took a good step there. Everybody knows, if you give up four or five, you’re not going to win very many games, so it’s just a conscious decision and paying attention to detail on the defensive side of things.”

It’s a very interesting situation for Kopitar, for his teammates, for Todd McLellan. We’ve heard about the “refresh” and the top prospects and the direction this club should be heading. But this team on October 17, 2019 is not a Stanley Cup contender, so how is The Process balanced with Not Being Okay Losing? To what degree can you digest a game like Tuesday’s as a step forward while understanding it was the third loss in four games for a team that can’t afford to fall behind the peloton again?

“At the end of the day, it’s a loss, so that’s what it counts as,” Kopitar said. “Sometimes, you almost feel like there’s a game that you’re not as upset about losing, because we did some of the right stuff, but you can’t get complacent. You can’t just start being okay with losing games and doing some good stuff. At the end of the day, you want to win games, whether that’s playing great hockey or just hacking it up, it is what it is. It’s the points that count in the end.”

— More interesting stuff from McLellan on Ben Hutton, who has two assists and a plus-two rating while averaging 19:43 of ice time over his first six games as a King: “When we considered and did sign him, we were short and we [thought] a guy like Forbort … would be back and maybe ready to go, and we’re thankful that we have Ben in there to pinch hit, and hopefully it leads to something longer for him and for us.”

McLellan went on to say that he’d seen a good deal of Hutton as a Pacific Division coach, which corresponded with Rob Blake’s scouting. “He’s had some up and down periods in his career where he’s been able to log 20-something minutes a night and be really a go-to guy, and then it kind of falls off, for whatever reason. I don’t know the answer to those issues, but so far here he’s been fairly consistent. With our back end, the youthfulness and the inexperience, he’s pushed up in the order a little bit more and asked to play in situations that he’s experienced before, but not on an every-day basis. So, he’s asked to contribute a lot right now.”

— My own favorite memories inside Staples Center aren’t really surprises. Reporters were on the ice in 2012 and 2014, and I was there for Kobe’s last game, Game 1 against the Pacers, Game 6 against the Red Wings, and physically felt the sheer pandemonium from the press box when Dustin Brown and Trevor Lewis scored 22 seconds apart against San Jose in 2013. There are also memories that aren’t as easy to process, none of which were as difficult to watch as Ryan Flinn’s severe head injury.

One recollection of mine is on the grittier side. I attended (or tried to attend) the free Rage Against the Machine and Ozomatli shows in the “protest zone” outside Staples Center on the night the President addressed the Democratic National Convention in 2000.

My memory tells me this was an event endorsed by Ralph Nader, part of some string of events known as the “Shadow Convention,” but that might just be mental flotsam because I haven’t been able to confirm that he attended or organized or was affiliated at all with the protests. In any event, I wouldn’t have been there to see him. I wasn’t there for any politics. I was there because I was 19; with nothing to do in August; and two bands I liked were playing what I’d heard to be a free show downtown. (I want to say this also gave me an excuse to use the fancy new Red Line branch that went into the Valley, but I may be mixing this up with the 2002 Lakers parade.)

This story is essentially going nowhere, so I hope you’re not waiting for any payoff or extrapolation of larger meaning. But I was in, I guess, what could loosely be described as “a riot.” We were safe. The epicenter of unrest was well removed from the actual building and largely localized around the the intersection of Olympic and Figueroa, a full city block of barriers, police and secret service-levels of deterrence away from the arena.

I don’t remember being teargassed, though I do remember the smell or hint of teargas while near the stage. I don’t remember seeing any beanbags or rubber bullets fired upon the crowd, but I do remember hearing or reading about that soon after. Really, I remember that the event was a bunch of music fans and a bunch of anarchists, the latter of whom started climbing the first orbit of chain link barricades around Staples Center and thus turned the concert into an illegal assembly. Two songs into Ozomatli’s set, I recall the power being cut and the immediate lizard-brained sense of, “OK, time to get out of here” that followed.

I was with a small group of friends that had all graduated from high school the year before, and we somehow got shepherded north along Figueroa Boulevard towards the heart of downtown. As we walked along the sidewalk, a large group of protesters who were linked in arms and, if I remember correctly, banging drums and chanting slogans moved by with urgency up the slight incline past Seventh Street, where we ducked in to one of the few restaurants open, California Pizza Kitchen. From there, we did take a moment to acknowledge at the irony of eating at a nationwide chain restaurant as those outside railed against the corporate influence on politics.

This isn’t sports history, rather Los Angeles history. That Staples Center can be linked to championships as well as a memorable episode of civic unrest is a testament to its permanence, visibility and continued usefulness in a world city inexorably linked with media and entertainment.