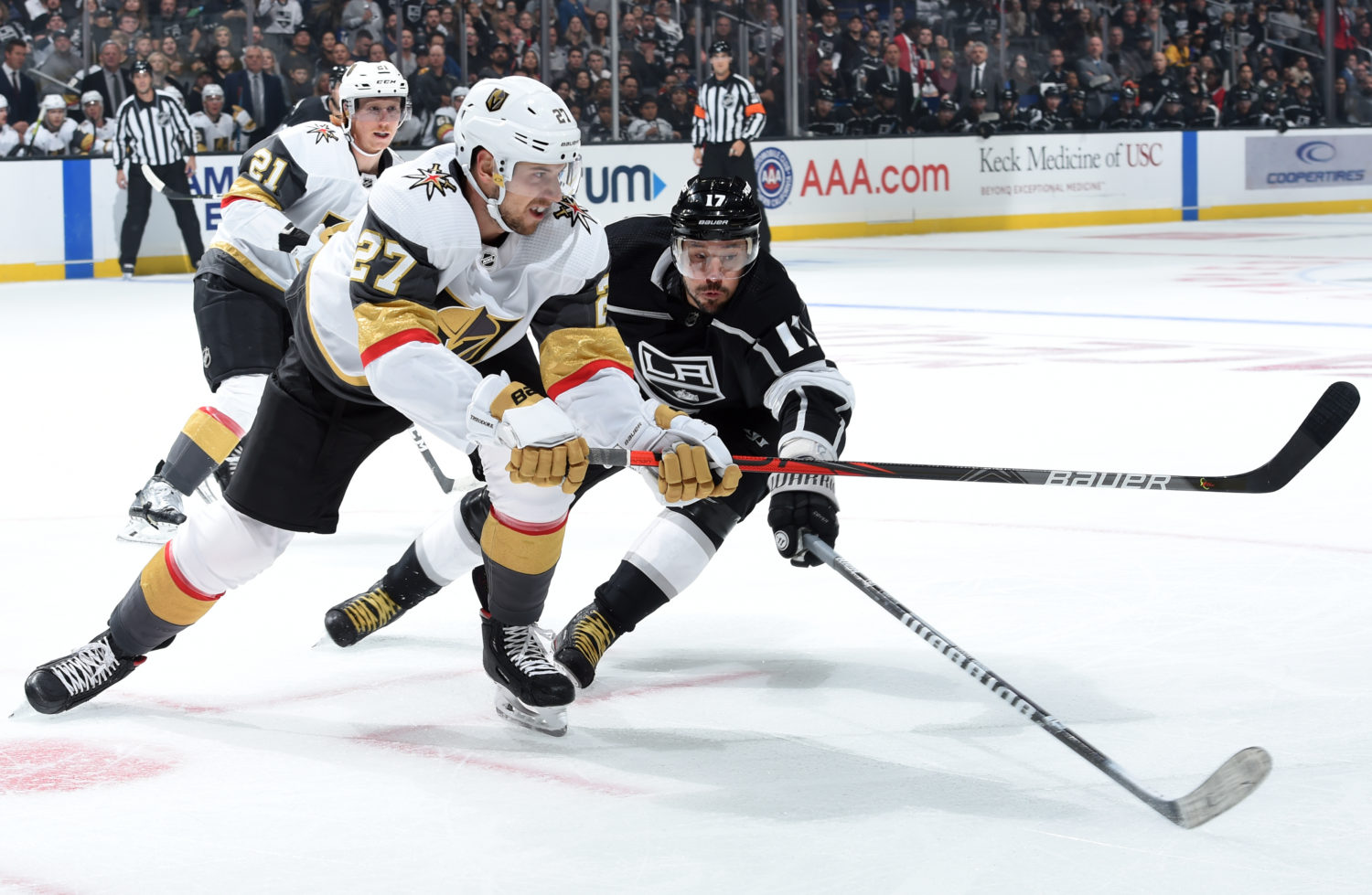 Todd McLellan, on whether it will take time to instill the penalty kill:
Actually, the penalty kill, there hasn’t been that much change to it. There’s work to be done. It was obviously a horrendous night for that unit. It needs work. Individuals need work. The system needs work. When I look at the penalty kill, though, there are some factors. There’s faceoffs and there’s the opportunities to clear pucks. Tonight, we got hemmed in our end. We couldn’t get fresh people on the ice and they’re obviously an elite power play right now. They took advantage of fatigue and they picked us apart, and eventually it was in our net. We never got relief on our penalty kill, ever. Faceoffs we did win, which was only, I think, two of them. We gave it right back to them. There are some things systematically, positionally, but there’s also the ability to get fresh people on the ice and stay ahead of it and we didn’t get that chance tonight.

McLellan, on whether penalty killing disrupted them executing their forecheck:
Well, it takes the team out of a rhythm. We want to be a four-line team, and as soon as you get into penalty kill trouble, you eliminate players, you take guys out of line rotations, your mindset becomes a defensive mindset and the energy factor that goes into a penalty kill, it zaps some of your better players. Certainly not what we wanted. Didn’t take many penalties, but I think a couple of them were preventable – penalties we didn’t need to take, but we’re learning.

McLellan, on the positives he took from five-on-five play:
From the red line in, I like how we’re playing. From the red line back, we’ve got work to do. I thought the other night against Nashville we came out of our end better. Perhaps that was due to the two different forechecks, but this team’s a handful. Vegas is a handful size-wise, they’re a handful positionally, speed and skill. I thought there were loose pucks that were up for grabs and we probably didn’t come up with enough of them or at least establish body position around the loose puck. So, red line-in, good things. Red line-back, some things we need to work on.

McLellan, on whether it’s still fair to judge Jonathan Quick through the lens of his success and legacy:
He’s still that good, in my opinion. When you’re the goaltender, when you’re the pitcher, when you’re the quarterback, all eyes are on you. It’s as simple as that. He’s the last line of defense for our mistakes, and we made our share of them. I thought tonight was perhaps his best game of the season. He made some outstanding saves when we needed ‘em. Are there a couple or one maybe that he’d like to have back? I’m sure he would. They’re at a defenseless position, really, when they’re looking at some of these shooters in the league, and we’ve got to be better around him. We know that. I think Quickie and Soupie both know that as well. We’ve got to be better around them to help them, and if they throw in a big save for us every now and then, we’re grateful for that.

McLellan, on how he’ll use his goalies over the remainder of the home stand:
The rest of the home stand? That’s a tough question for me to answer right now. We’re going to regroup. We’ve had two sets of back-to-backs in four days, so our team needs to regroup tomorrow, get freshened up, and we’re going to play one hell of a good team on Tuesday, and that’s all we’re really thinking about. So, we’ll talk about goaltending tomorrow and who starts, and then worry about the games after that as they come.

McLellan, on any plans to get Tobias Bjornfot into a game soon:
We don’t want a young player not playing by any means, but we also have to keep in mind that we have to keep some guys up and running, and Joakim Ryan, he hadn’t played yet and he played two pretty darn good games. We’ll make decisions on Toby as we go forward and what’s best for him and his career and for us as a team right now.

McLellan, on factors that led to the Kings leaving Quick in a “defenseless position” on the penalty kill:
We’ve got a lot of work to do in … the penalty kill situation. We’ve got some structural things we’ve got to work on, we’ve got some anticipation things we’ve got to work on, faceoffs and clears are going to be really important so we can get fresh people on the ice. Some of their better chances on the power play, Quickie actually came u[ with saves – anything that went through the seam. It was the gifts we gave them. It’s amazing how much energy goes into defending in comparison to playing offense. You could stay on the ice forever and play on offense, and we used all our energy up and just kept giving the puck back to them. It’s hard to evaluate the whole unit and the goaltender in that situation when we’re serving up volleys, I guess, for them, one after another.

Anze Kopitar, on what can be done to accentuate the desired aggressive play:
Obviously trying to shoot the puck on the power play. The penalty kill, just making sure we stay more compact in the middle of the ice where all the dangerous ice is. But we’ll look at that. We certainly can’t get discouraged. We’ll look at that, we’ll correct things and go from there.

Kopitar, on ways to be more “challenging” and aggressive:
Yeah, obviously. You want ot be as aggressive as you can, but with that comes a lot of different factors. Obviously, you’ve got to make sure that you take care of the puck, make sure you can be aggressive – really, you can’t be just aggressive for no reason because the team on the other side will burn you. You’ve got to play smart. I thought the first period was pretty good. I thought we had chances. We didn’t score, and at the end of the day, that’s what made the difference. They had three power play goals and we didn’t have any.

Kopitar, on taking strides in five-on-five play but trying to avoid “track meet” 80-shot games:
Our system, our style is aggressive, but we’ve got to play within that. Aggressive means hunting the puck and try to get it back in our position as quick as you can after you lose it. Aggressive means playing in the offensive zone and making sure we throw a lot of pucks at the net, and aggressive in the defensive zone means that you want to take away the ice and the time for them to make plays. It’s really not that big of a secret, but you’ve got to execute it in order to be successful.

Kopitar, on whether the five-on-five play is getting cleaned up:
Listen, we’re five games in. It is an excuse, but coming in, we’ve been together for a little over a month now. There are some significant changes that sometimes it will take a little bit more time than the other, but we’re on the right track. The one thing we can control is effort every night, and I think that has been the case, and we’ve got to build on that. We’ll get better system-wise, too. We’ll get more of a ‘reacting’ instead of ‘thinking’ on the ice, and it’s going to get better.

Kopitar, on whether it’s going to take more time to get comfortable on the penalty kill:
Well, if you look at tonight, we don’t really have a whole lot of time. That’s the one thing you’ve got to clean up right away. We’ll look at it and make an adjustment.

Kopitar, on the newer systems becoming more “natural”:
Yeah, some of us, we’ve played the same system for 10-plus years. It’s tough to just turn it off and turn the new one on. There are still some lingering effects from the other one, but like I said, we’re taking steps in the right direction. [Reporter: How tough has that been for you in particular?] It’s not been too tough, but sometimes you catch yourself thinking on the ice what you’ve got to do instead of just playing – the way that it comes instinctively. That split second turns out to be a difference of making a play and not making a play. But, like I said, we’re trending the right way.

Kopitar, on whether he’s been surprised by the number of shots and chances this season:
Well, that was the goal to start, to play on our toes, to be aggressive. Like I said, we’re trending in the right direction, and that’s encouraging.

Jonathan Quick, on whether he’s experienced a start to the season like this:
I don’t know, I’m sure it’s online, you could look.

Quick, on whether he’s seeing the puck well:
Yeah.

Quick, on whether today’s game represented a step forward:
It’s a loss, so the same as the last two. [Reporter: So, you don’t sense any difference either way?] It’s a loss. You either win or you lose. Either one or the other.

Quick, on whether he entered the season satisfied with his preseason:
Yeah.

— With the loss, Los Angeles fell to 5-4-1 all-time against the Golden Knights, a record that includes a home mark of 3-2-1. These teams have three games remaining: November 16 at Staples Center and January 9 and March 1 at T-Mobile Arena.

— Los Angeles allowed three power play goals in a game for the first time since a 1-for-4 penalty killing performance in a 7-4 loss to Colorado on November 21, 2018.

— With his assist on Dustin Brown’s goal, Anze Kopitar extended his point streak to six games (2-6=8). He has a point in every game this season.

— With his assist on Austin Wagner’s goal, Sean Walker extended his point streak to a career-high four games (2-2=4).