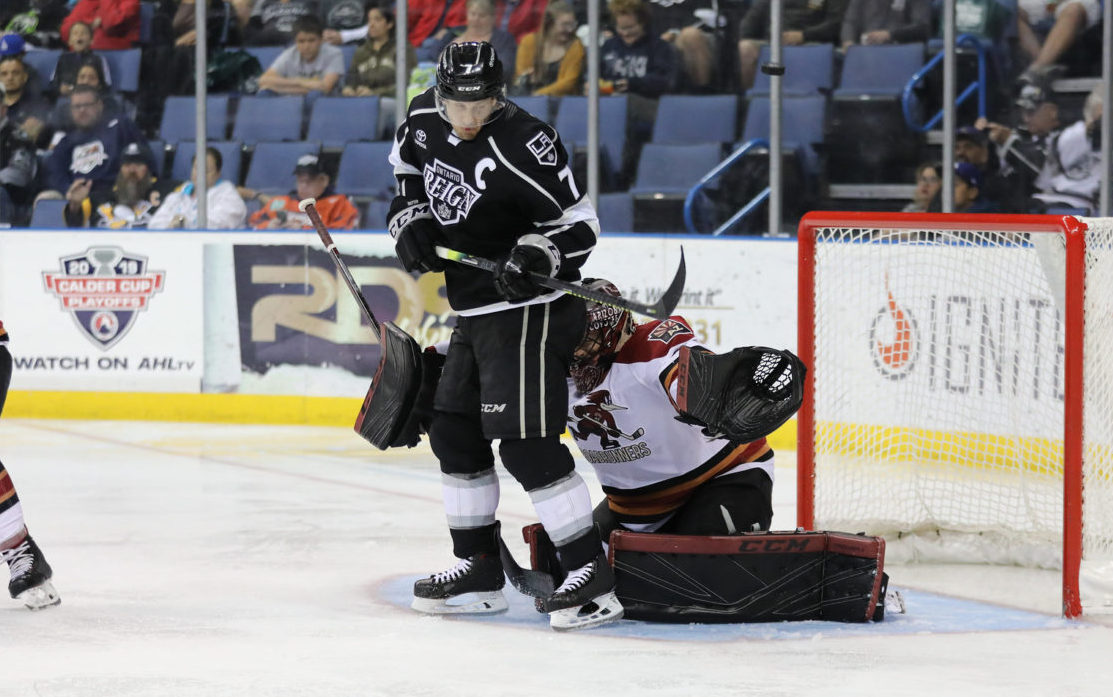 TONIGHT’S MATCHUP: The Ontario Reign conclude their back-to-back set this weekend as they host the Tucson Roadrunners for the first time this season. The Reign enter tonight’s action off of last night’s 4-3 overtime defeat against Colorado, their first loss of the season.

WHAT TO WATCH FOR: A small group skated this morning for Ontario. Forwards Drake Rymsha, Jacob Doty and Brad Morrison were on late for extra work, which still leaves one roster spot up for grabs tonight. Markups Phillips was on the ice, as were Johan Sodergran and Boko Imama, but none stayed on late. Expect Cal Petersen to go again tonight for Ontario, with Villalta on the ice this morning and Petersen not skating.

LIKE MIKEY: Ontario forward Mikey Eyssimont collected his first points of the season last night with a multi-point effort (1-1-2). Eyssimont scored his first of the season in the third period, whacking home his own rebound after a wraparound attempt. The multi-point game was the fifth of Eyssimont’s professional career, after he scored two points four times during the 2018-19 season.

ALSO LIKE MIKEY: Reign defenseman Mikey Anderson scored the first goal of his professional career last night, with his second period tally putting Ontario on top for the first time. Anderson has collected a point in each of the Reign’s first three games this season and leads all Ontario buleliners with three points (1-2-3). The Minnesota Duluth product leads all rookie defensemen in the AHL in points through three games, and is tied for second overall among first-year skaters.

THREE LETTERS, THREE GOALS: Ontario forward Martin Frk continued his hot start to the season, as he found the back of the net for the third time in three games. Frk joins Anderson as the only Ontario player with a point in all three games and is now tied with Mario Kempe for the team lead with three tallies. Across the AHL, the Reign pair are tied for second in goals scored, two of seven players with three-or-more goals.

FIVE FOR FIGHTING: Reign forward Rasmus Kupari found his way onto the scoresheet for the third straight game, but not in the way you might think. Kupari received his first AHL fighting major in the third period, standing up for himself after a few unnecessary whacks, following his own skill play. Kupari now has the season-long “Gordie Howe Hat Trick” with a goal in Game 1, an assist in Game 2 and now a fight in Game 3.

FAMILIAR WITH THE FOE: Ontario forward Mario Kempe spent a chunk of the previous two seasons as a member of tonight’s opponent, the Tucson Roadrunners. Kempe appeared in 57 games with the Roadrunners from 2017 – 2019 and amassed 48 points (23-25-48) in his time there. Kempe also appeared in 70 games with Tucson’s NHL affiliate, the Arizona Coyotes, and tallied a total of 13 points (6-7-13).

INJURY UPDATES: The Reign will again be without defenseman Sean Durzi, who misses this weekend’s action with an upper-body injury, suffered on Opening Night against San Jose. The Reign will also miss defenseman Daniel Brickley, who is out tonight with an upper-body injury. Forward Drake Rymsha also remains sidelined with an injury suffered in preseason, though he has resumed skating.

SCOUTING THE ROADRUNNERS: Tucson earned a split during its opening weekend, with a 2-0 win in Texas on Opening Night, followed by a 5-2 loss to San Antonio two days later. The Roadrunners got a shutout from rehabbing goaltender Antti Raanta, who made 19-saves in the win. No Tucson played has collected multiple points on the season through two games, but the team added a key piece in defenseman Kyle Capobianco, who was assigned by the Coyotes in advance of tonight’s game.