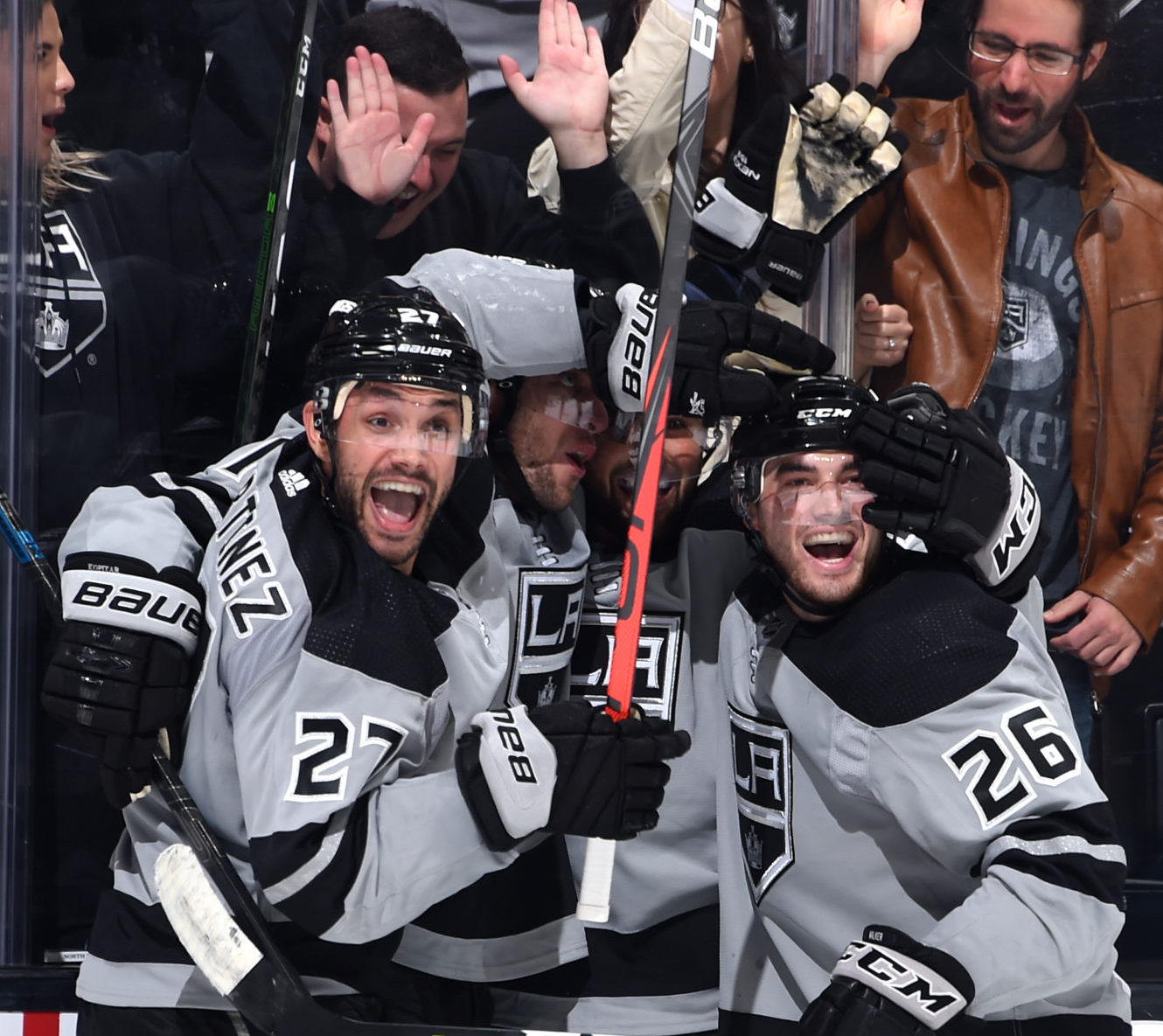 Todd McLellan, on the team’s heavy push through the first 40 minutes:
Well, it’s cliché time, but we played on our toes and we played well within our system. We won faceoffs, we had pretty good possession right there, and then we were able roll four lines. A lot of the times we stayed ahead of them in line changes and we were fresh. So, we played towards the identity we’re trying to develop. I thought in the third we reverted back to something we don’t want to be, and that’s being really passive and standoffish. There were a number of times where we were in a standoff type of forecheck, and that’s not the type of team we want to be.

McLellan, on using Predators video clips to teach the Kings and instill systems during training camp:
Nashville’s been an aggressive team for a long time. They’ve been very successful with the type of game they play. ‘R and D’ is ‘rob and do’ for us, and we’re looking at what successful teams do, how we can implement it. We use some of their clips for some teaching, but we’re trying to develop our own style, and right now we’re six, seven exhibition games, four or five into the regular season, we have enough video now where we can concentrate on our group. They can see themselves doing it right, and sometimes they can see themselves not having success because they’re wandering off doing things they shouldn’t be doing, and it’s a great contrast, a great teaching tool.

McLellan, on the message when Nashville had tied the game at four:
We were calm. We wanted them to breathe a little bit. We talked about the identity. What do we want to be? I think when you’re in the batter’s box you should be swinging. If there’s a pitch that’s close, swing at it, and we weren’t even thinking about that in the first 10 or 15 minutes of that period. We talked about reestablishing a forecheck, getting aggressive, if we make mistakes, we’ll live with them, but let’s get going again the way we can play and the way we want to play. [Reporter: When you say ‘standoff’ and ‘passive,’ where do you see that? Is it just in them getting rid of the puck too quickly getting through the neutral zone?] Let me explain it this way: I don’t think once we ever stood off and let them manage their breakout from behind their net in the first two periods. In the third, there were probably five or six times in a row where we’re standing off, they’re getting what they want, they get fresh players on the ice, they get to play long, we didn’t make it difficult on them. That is not what we want to be. We want to be what we saw for the first two periods. We’re accomplishing things as a team. We’re starting to develop our identity. We slipped back a little bit every now and then. That’s why there’s so much inconsistency in our game. Once we get it and everybody buys in for a full 60, we’ll be fine.

McLellan, on the impetus to move the lines around:
We thought that Kopi’s line gave us a pretty good rate of offense and defense for the first three games. In fact, Cliffy, Lewis and [Amadio], they were playing really well too, but we needed to distribute players from the Kempe line. I didn’t think they were really effective and they were getting scored on a lot. So, we had to dismantle lines. I liked what we saw tonight. Can they maintain it? Can they keep it going? I sure hope so.

McLellan, on whether Michael Amadio can step into a second-line center role:
Depends what night and who we’re playing. I think Michael’s a tremendous player. I didn’t realize how talented and how bright a player he is. He’s got a very good hockey mind, he’s got a little bit of – don’t take this and don’t put the pressure on Mods – but a little bit like Pavelski. He’s not the quickest guy, but he’s pretty smart and he moves around the rink well. For him, I’d like to see how he responds tomorrow because sometimes in the back-to-back games it slows him down a little bit. But I think we ca get him there.

McLellan, on the forecheck as a “domino effect” generating possession and line change advantages:
All of those. More importantly, they get a lot of offense from the blue line – jumping into the rush, leading the rush, creating off the shot as we saw in the third period. When you’re forechecking the way you are, they don’t have the energy or the will to get up-ice all the time and it keeps them from being effective. We needed to do that, and we did for 45 minutes of the night. It’s the other 15 that got away on us.

McLellan, on what Sean Walker has done to take advantage of his opportunity:
He can skate. Today’s game, it’s one thing to be able to do the job, but you’ve got to get there to do it, and Walks can get there. And then when he gets there, he’s been getting the job done. There are other D-men on our team or in the league that have a little bit of trouble getting there sometimes, so the job’s that much harder. But Walks gets there. He’s getting rewarded offensively and defensively.

McLellan, on earning a win in his first home opener as Kings coach:
Personally, I’m happy for the group. I thought it we had left tonight without a point or even losing that game, it would’ve been a maintenance day as far as digging in again tomorrow and massaging minds and the mental part of it because the guys played well enough to win. We just gave it back. My satisfaction is to see them happy, playing the music and beginning to understand who we can become. You see it in flashes, so that’s what we’re working towards.

McLellan, on the top line off putting the game away and the importance of getting off to good starts:
It’s your top line. I think you kind of answered the question with the question. It’s your top line. They’ve got to give you nights like that and they’ve got to score big goals. They played important minutes against big players, and that’s what your top line does. There are going to be other nights where they need somebody pulling the rope for them, and that’s where everybody else comes in to play. I thought today we had a four-line game. I really did.

Dustin Brown, on whether the team can consistently “compete” over an 82-game season:
I think – it’s not just ‘I think.’ We’re going to compete away. I think there’s a lot of work to be done in learning how to win again, and what I mean by that is for whatever reason we’ve kind of sat back on our leads, even in preseason. Maybe it’s just a quirk of our team that we have to figure out and address, but I think if we can start the way we did tonight, which is maybe something that you guys aren’t used to us starting that way – we’ve kind of been a slower starting team. It puts the team on their heels and can build a pad, and we’ve got to learn how to protect a lead – it’s actually not even about ‘protect a lead.’ It’s about going after it when we have the lead still. I think we maybe took our foot off the gas, and then our forecheck doesn’t work and our neutral zone doesn’t work and then we’re playing D-zone.

Brown, on whether the time out was used as a strategic tool or to calm players down:
Probably to calm the guys down. They scored two quick ones to tie the game. Settled the guys and realized we still have five minutes to win a game. Now we have to get another one. Regroup after a couple breakdowns.

Joakim Ryan, on setting up Kyle Clifford’s goal:
We kind of worked the puck from low-to-high there, and once I got it, I saw I kind of had some time and space, so just try to drag it to the middle and get it towards the net, and Cliffy had a great tip on it and obviously it went in.

Ryan, on the team’s immediate response to surrendering the lead:
Todd kind of just said ‘settle down.’ He wanted us to keep playing our game, not stray for it. They got a goal on the power play there, kind of a tough bounce. Obviously like you said, they’re a good team so they’re going to push back, too. But he just said not to get away from our game and keep doing what had made us successful for the first two periods. I think after that it kind of settled us down a little bit and we got back to it.

Ryan, on the consistent push for the first 40 minutes:
Yeah, obviously the first two periods I thought we played very solid hockey. We were executing our systems the way we wanted to, and I think, what did they have after two periods, like, 12, 13 shots? So, when you’re holding a team to 13 shots, you’re going to be successful most nights. It was just about sticking about the way we’ve played the whole game, and obviously it maybe got away a little bit there when they had that push back, but for the most part I thought we executed our game plan.

Sean Walker, on his quick-up to set the game-winning goal in motion:
They were changing, and I know Marty was going back to the blue line, so I got a quick up to him and he made a great play at the blue line to Brownie, and he put it to the net and obviously finished it.

Walker, on the team’s early offensive success:
I think when we get hemmed in, everybody’s kind of buzzing right now. Everybody’s putting pucks to the net, and on top of that, we’re getting the puck back and we’re getting secondary chances and stuff. I think if we can keep going that way, we’re going to keep scoring a lot of goals.

Walker, on what to apply structurally for the remainder of the home stand:
I think you saw they weren’t really getting many chances. I think it was kind of the same thing with the Calgary game. We kind of had our lapse in judgement there with a couple plays and the ended up putting it to us a bit there, but I think if we stick to our structure like we did the first two periods, then they’re not going to have too many chances and if we carry that onto the rest of the games, we should be OK.

Walker, on his wide on-ice shots-for and shots-against discrepancy:
I think I’ve been fortunate to be out there for some really good shifts we put together. I know I had the mindset we’re putting pucks to the net – that’s what Todd’s preaching – so everybody’s buying in on that and getting pucks to the net and I think it’s working pretty well.

— Filip Forsberg and Calle Jarnkrok both appeared in their 400th NHL games.

The Kings are not scheduled to hold a morning skate on Sunday, October 13, though a small handful of players may participate.