Waking up with the Kings: October 9 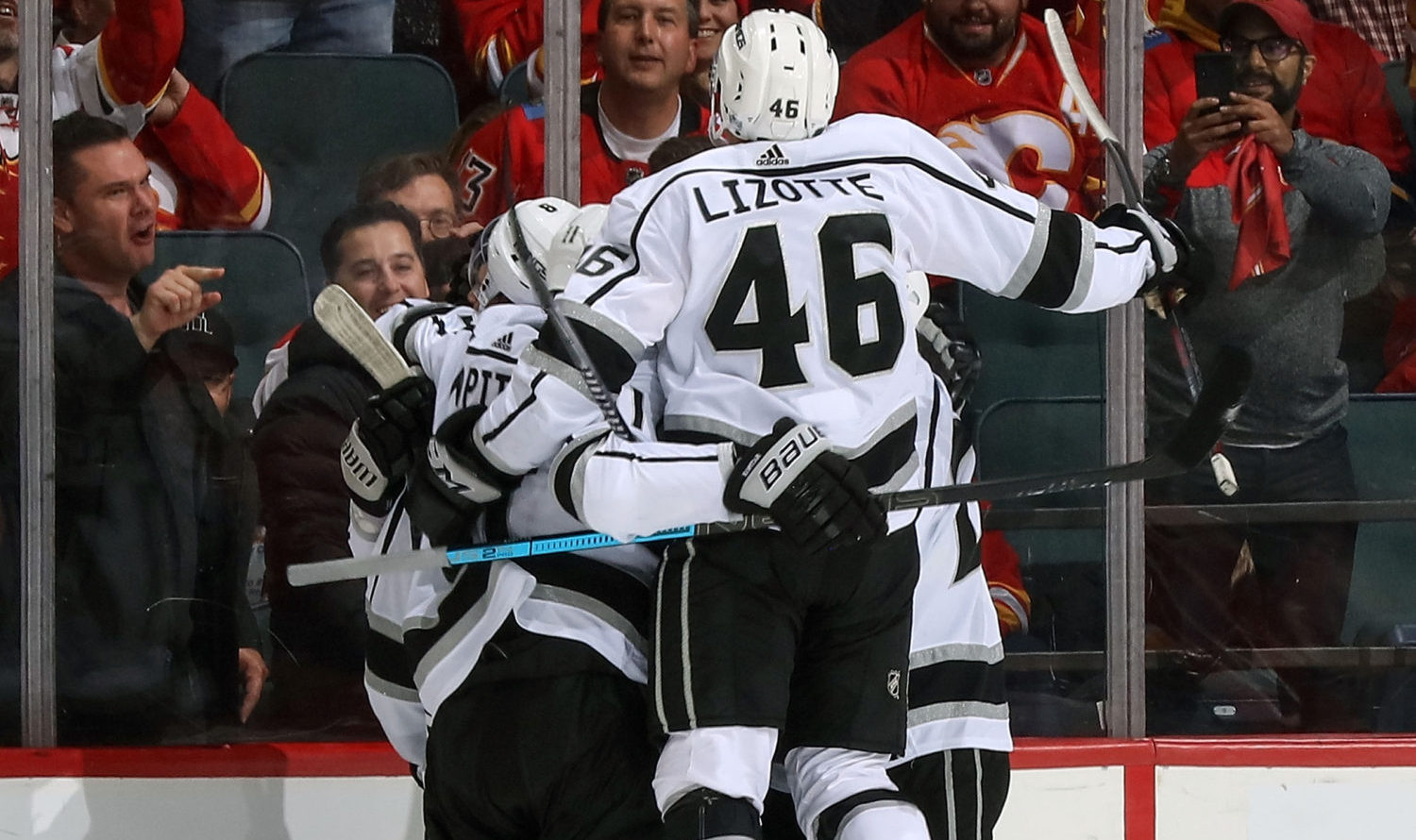 Whether or not we want to admit it or breathe extra life into a personal rivalry fueled by the players’ dislike as well as regular prodding from the media, the Doughty-Tkachuk storyline has provided for some tremendous theatre during its occasional flare-ups. Tuesday’s game, a 4-3 overtime win at Scotiabank Saddledome, may not have elicited the same visceral reaction as seeing Jarome Iginla in an LA Kings jersey spattered with Deryk Engelland’s blood, but that speaks to the allure summoned by this resuscitated rivalry. Last night’s game was a tremendous hockey game, Game 2 of the regular season, and both of the primary actors involved were at their emotional and dynamic best. Kings fans should watch the After Hours interview. Tkachuk comes off well. He’s got things to say, he sounds intelligent, he exudes personality. And even when the inevitable Doughty questions surfaced, he got in a sly dig. Not something overboard or emotional, but something appropriately subtle and with a sharpened edge. Doughty and subtlety are rarely used in the same sentence, but his “we all know who the better player is” retort, while similar to some of his other expressive comments directed towards Tkachuk, was as much of an exasperated response to the repetitive questioning as it was a shot across the Saddledome hallway. Even if we weren’t predicting a gong show, it did seem as though Tuesday’s affair would supply ample drama. 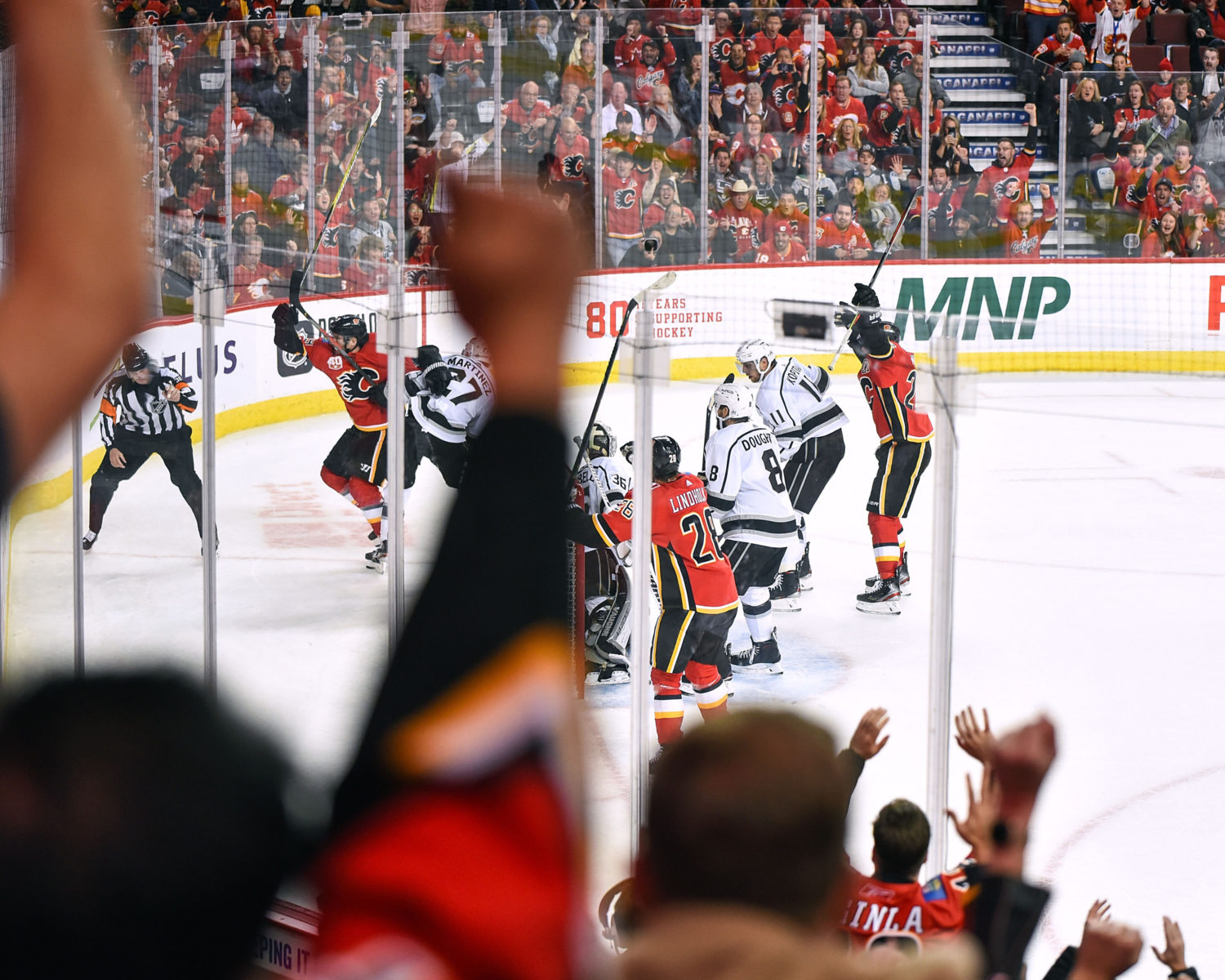 Executing the structural blueprint instilled in training camp and with the raised emotions of having lost a difficult premiere in which they scored five times, Los Angeles opened the game with a tremendous first period that ended with a 2-0 lead and a 20-3 shots advantage. They streaked out of the gate on the backs of those looking to rebound from Saturday’s outing, and McLellan acknowledged challenging Ilya Kovlachuk, Jeff Carter and Adrian Kempe. They were up for the challenge, “so, we quickly recognized they were in the game and got them a lot of ice time,” he said. Kovalchuk was the most visible of the bunch, and even before winning a loose puck to the left of David Rittich to spark Tyler Toffoli’s first goal, he’d also won another puck behind the net earlier on the shift before issuing it to Toffoli in the slot. His first three-point night in 11 months, it was easy to see why Kovalchuk was often the choice to double-shift alongside Blake Lizotte and Toffoli, given the decision to go with 11 forwards and seven defensemen. Kovalchuk is at his best when he’s getting that regular shift and regular chances to make an impact in the game, which was part of last season’s Catch-22. It helped Lizotte, whose energy was palpable and decision-making sound; the Kings almost scored a third time in the first period when he intuitively shot far-pad on a rush, forcing a dangerous rebound that just missed connecting with a net-driving Kempe. 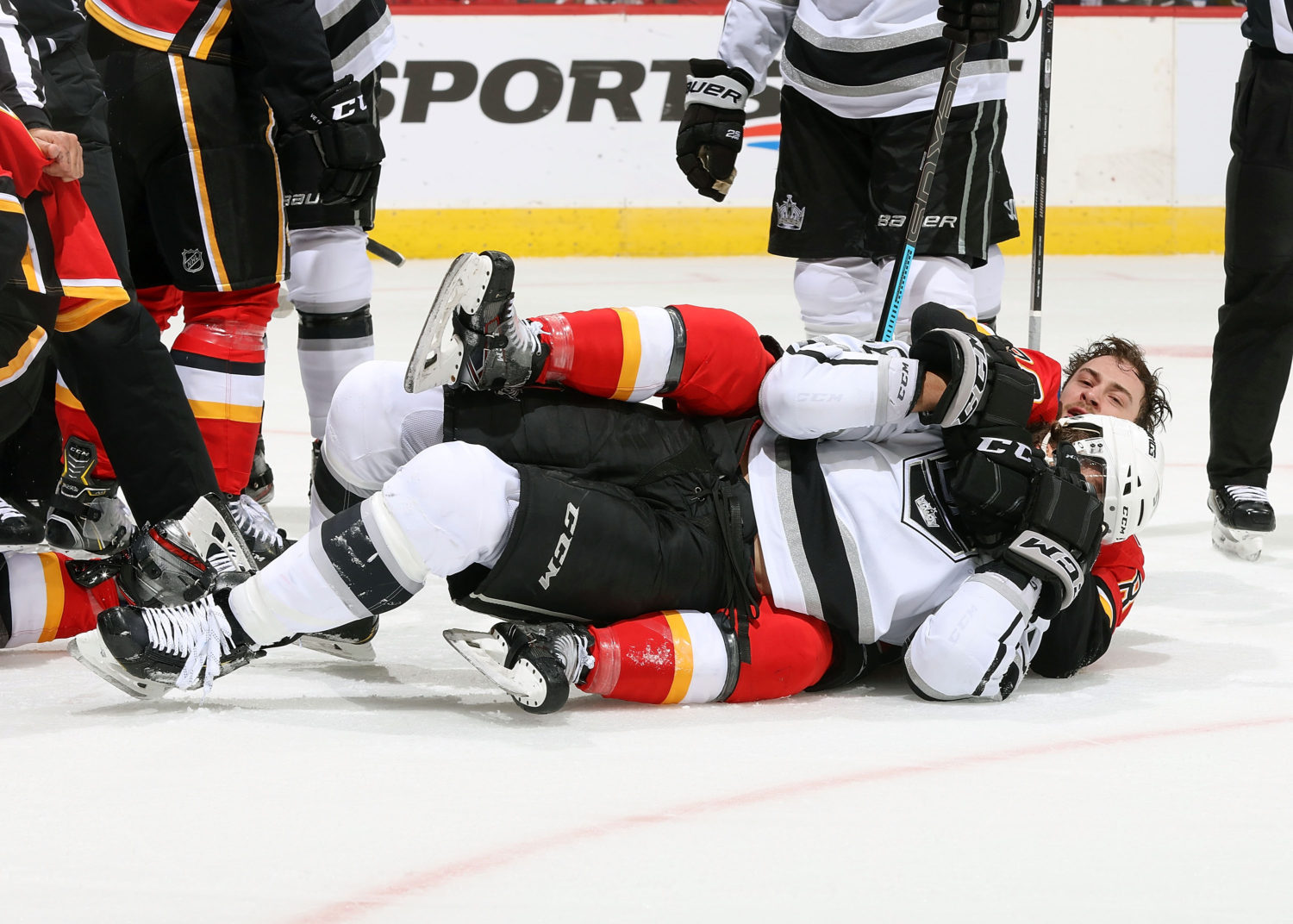 After two games, Ben Hutton is fitting in well. He’s a very good skater and appears capable of reading the play well while skating the puck up-ice. His patience early in the game navigated the Kings out of a tough spot after an icing kept several role players on while Bill Peters switched to the Mikael Backlund line, and after Anze Kopitar (staying on with Kyle Clifford and Trevor Lewis) won the draw, Hutton held the puck long enough to skate it out of the zone and flip it (after a deflection?) into the Calgary bench. And though it was Walker’s icing that led to the faceoff, he had another strong night and scored a goal in his nearly 20 minutes of work, at one point sprinting to beat Johnny Gaudreau to a 50/50 puck that he sent up-ice to Hutton, who deposited it into the attacking end and generated an offensive zone faceoff moments later. Speaking of Kopitar, though he was pick-pocketed on Tkachuk’s first goal, that was a good play by Andrew Mangiapane to tie up Kopitar’s stick, and the L.A. captain was at his hard-skating, stick-lifting, pass-intercepting, two-time Selke Trophy-winning best without the puck. 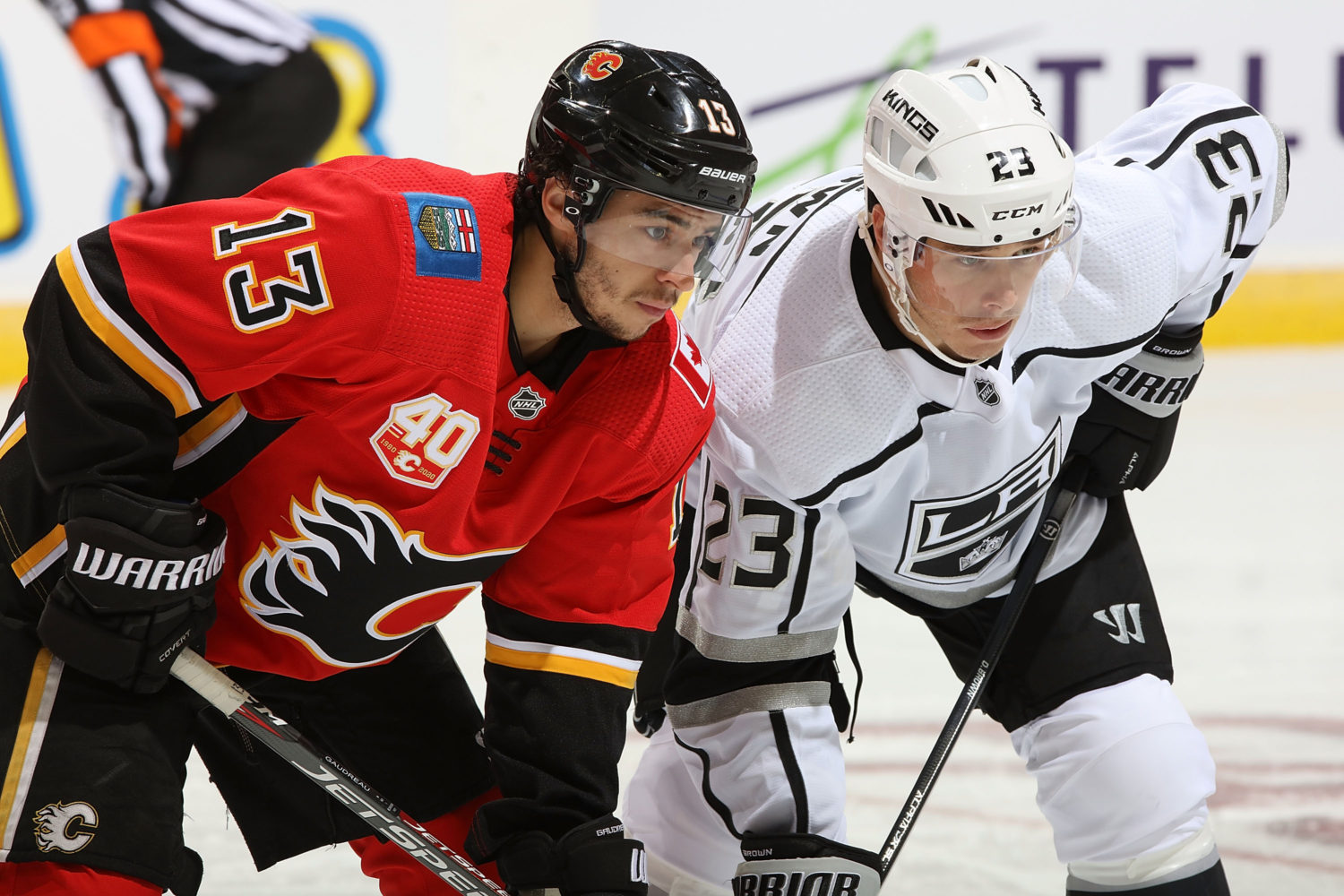 We’ve all been asked about the lack of review at the end of the game. All of your answers are here. These are my interpretations, which are assumptions and not based on particular conversations with the coaching staff. Importantly, remember there’s extended review this season to include plays resulting in goals that should have been blown dead. Also important: Had these events happened anywhere from four-to-seven seconds later, review would have been initiated by the league. There are two plays many of us have been asked about. The first was the puck glancing of Johnny Gaudreau’s glove towards Rasmus Andersson, whose shot popped into the air for Tkachuk to juggle and score (!) (!!!). The Kings could have reviewed that for a hand pass, but in my mind, that’s a judgement call that’s difficult to overturn. Rule 79.1, Hand Pass, states that “… play shall not be stopped unless, in the opinion of the on-ice officials, he has directed the puck to a teammate, or has allowed his team to gain an advantage, and subsequently possession and control of the puck is obtained by a player of the offending team, either directly or deflected off any player or official.” Gaudreau inadvertently touched the puck, so it’s arguable that he didn’t direct it to his teammate. There’s wiggle room for interpretation there, and if the Kings lost the challenge, not only would the goal have stood, but L.A. would have then had to kill a penalty for an unsuccessful challenge with 1:04 remaining in a tied game. I would assume a similar interpretation applies to the Tkachuk volley – that it’d be difficult to overturn the on-ice call of a goal, and that an unsuccessful challenge would’ve afforded the Flames a prime opportunity to win the game in regulation. I thought the volley to be above shoulder-height, but keep in mind depth and distance is distorted by parallax, there’s little data at the moment on the success rate of challenging plays determined by newly expanded review, and there are a number of video coaches downstairs and Bill Ranford upstairs communicating. I’ll see if I can get a little bit more on this conversation over the next few days. 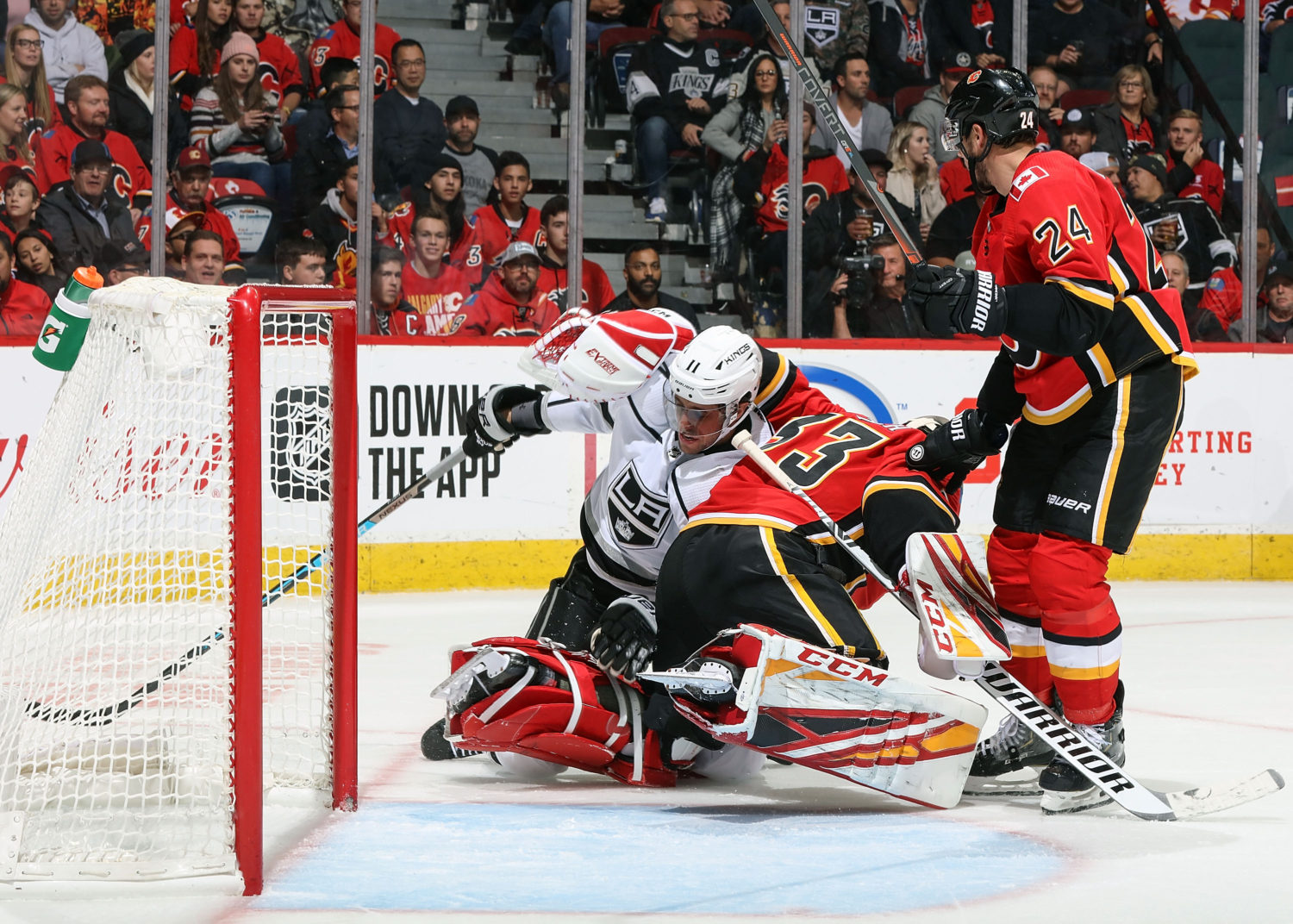