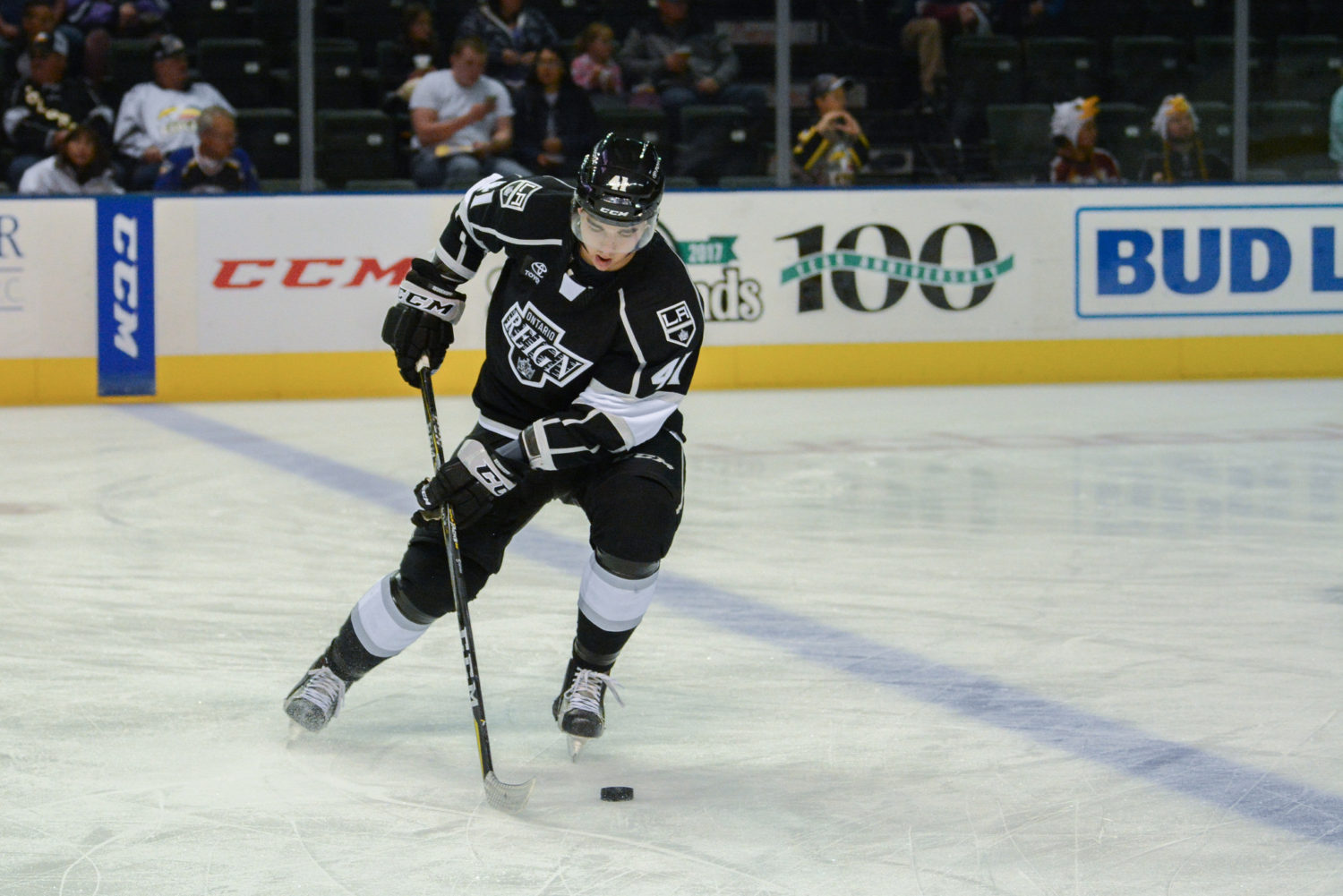 What once seemed like a crowded Ontario Reign blueline suddenly became much needed depth, after a pair of defensive injuries knocked a nine-man unit down to seven in advance of this weekend’s games.

Per Reign Head Coach Mike Stothers, Ontario defensemen Sean Durzi and Daniel Brickley will both miss this weekend’s home games, which is expected to push either Chaz Reddekopp or Markus Phillips into action on the backend. The Reign dressed seven defensemen on Opening Night, down to six for Saturday after Durzi’s injury and now sit in need of a season-debut for the weekend ahead.

Enter Reddekopp and Phillips, who are more than worthy in their own right – the Reign opened the season with nine, AHL -caliber blueliners with only six or seven spots in the lineup depending on the alignment that the Reign choose to use. Stothers feels that both Reddekopp and Phillips have put in the work during practice to be fully ready to step in as needed.

“Chaz always makes sure he’s ready to go whenever his name is called and you know what, Markus is the same,” Stothers said. “This depth that we were kind of concerned about having too many, has kind of taken care of itself in a two-game set this past weekend. Playing back-to-back, it would be nice to get the big man [Reddekopp] into some game action and then we won’t forget about Markus either, he’s been working extremely hard, he’s one of the hardest working guys in practice. The good thing is, they’re doing everything they can to be ready and when their name is called, they’ll do a great job for us.”

Practice alignment this week has moved Reddekopp alongside defenseman Paul LaDue on a pairing, with Phillips skating as the seventh defenseman. Other pairings today were holdovers from Saturday in Bakersfield, with Mikey Anderson and Kale Clague together, and Ryan Stanton alongside Austin Strand. Reddekopp’s experience, with a pro season under his belt, gives him the initial leg up to enter the lineup, though Phillips will get his opportunity too. For his part, while Reddekopp obviously wishes that it came under different circumstances, the second-year defenseman is ready to make his season debut, whether or not it comes this Friday.

“I think that’s what it’s all about, seizing the opportunity when it presents itself,” Reddekopp said. “Being one of the lower D to start the year…obviously you don’t want to see guys get hurt ever, but it could be big for me and I’m really excited to get the opportunity to play.”

Reddekopp made some massive strides in his game from where he began at training camp as a rookie last season to where he stands now, thought the talent around him has done the same.

The former Victoria Royal finds himself in a situation similar to his rookie campaign, on the outside of the Top 6 looking in. Reddekopp made his season-debut last season in late-October but got into just three AHL games during October and November, with a short stint in the ECHL with Manchester included in there as well.

The 6-4 rearguard perhaps wasn’t ready for a full-time role to begin last season, but showed growth and development in his play as he earned a regular spot in the lineup during the second half of the season, earning praise from Stothers during last season’s exit interviews. His situation now is more a result of increased depth around him than any indictment of his current play, though he’s determined to make an impact when he does get an opportunity.

“I think that’s the main goal going forward,” Reddekopp said. “When you do get in the lineup, I think that’s what you’ve got to do, you’ve got to shot the team, the coaching staff, that you really want to be in the lineup and that you can be a good asset to the team and help the team win. Whenever I get in, whenever that may be, I’m just going to do whatever I can help the team win and do what I can to pump up the boys.”

What the hard work of Reddekopp and Phillips, while not in the game day lineup thus far, has done is create a healthy competition on the blueline for the places during games. For those not playing, making that impression during practice is a must to make Stothers and his staff’s decisions difficult, something that the Reign bench boss has praised both Reddekopp and Phillips for over the first couple weeks of the season.

“For their benefit, they have to, because when they do get that opportunity, usually you’re evaluation is not lenient, that’s just the nature of the business right?,” Stothers said. “Their job is to make my job extremely hard. When you feel like you have nine D that are capable of playing, and probably should be playing, then they’re doing what they’re supposed to be doing and it’s out of their hands that they’re not playing and it makes it harder for the coaching staff. Should that level of work and preparedness drop off, for any one of the nine, then it makes it an easier decision to say ‘okay, we can only dress six out of these nine guys, who’s going in, or it’s easier to go the other way and say he’s an easy guy to take out.’ Chaz is a great person, we know that, he’s a great teammate and Markus is certainly showing early indications of that as well. We’re going to try and get those guys in as soon as possible.”

Things will officially shake out as we move towards the weekend and with a back-to-back set, there could conceivably be changes as well between the two games. The Reign are back on the ice tomorrow at 10 AM in El Segundo, before they begin their weekend at home against Colorado on Friday at 7 PM.