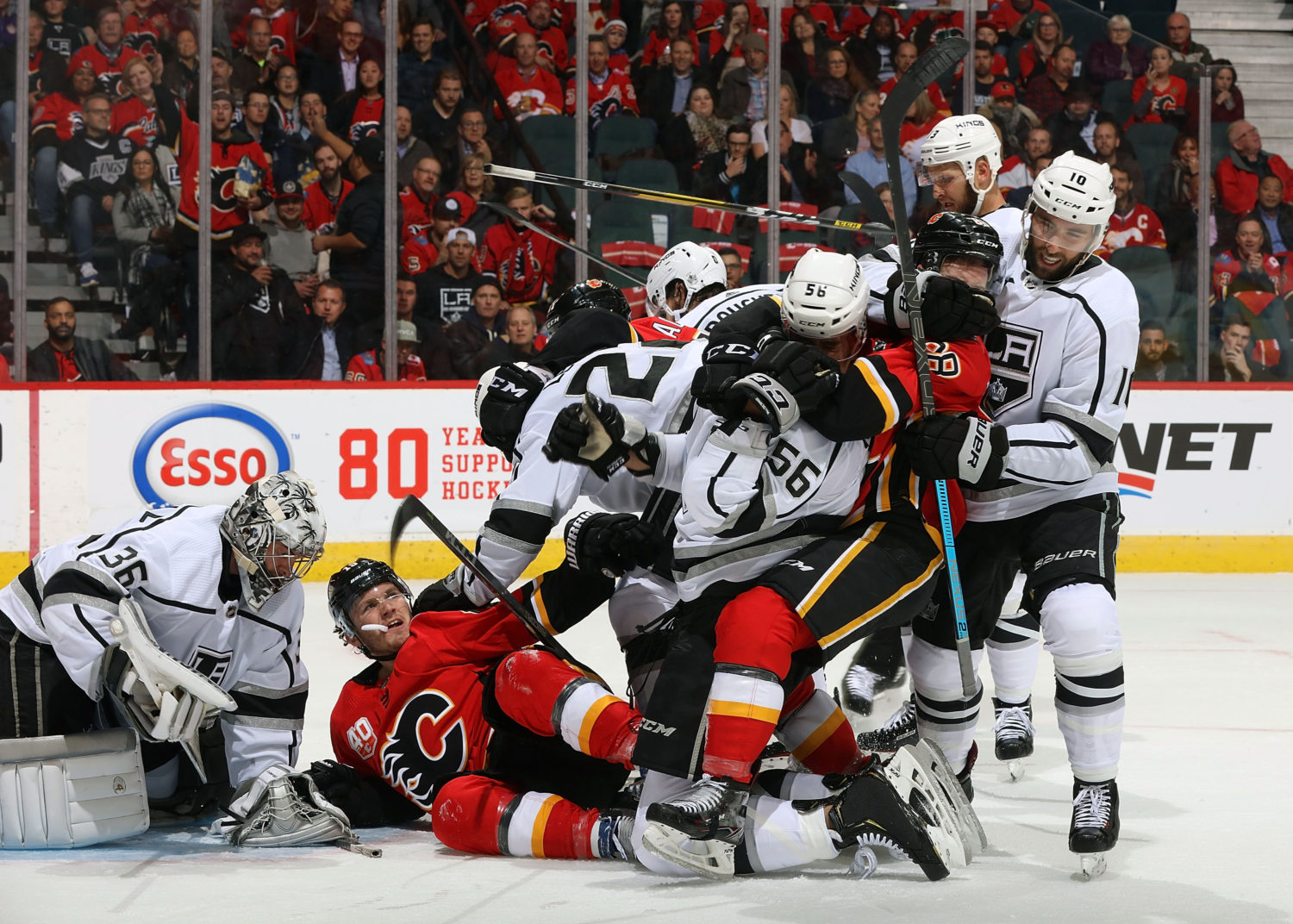 Todd McLellan, on the win:
It was a tremendous effort, a great start and a tough building to play in, and we needed that. It healed the wounds of the Edmonton game, I thought, really quick. It gave us some confidence in the building. They’re a good team. They ended up in first last year in the division for a reason and they pushed back, yet we had some resolve to continue on and find a way to win it.

McLellan, on the Doughty-Tkachuk rivalry:
Well, for our team, it’s really important. We needed a win, we needed to get rewarded for some of the things that we were doing well, and we didn’t get that in Edmonton. We got it here tonight and we have something to build on now. Different players came in and had an effect on the game. Players that had weaker nights in Edmonton had much better nights here, and that’s a sign of growth. We started the season by starting the season that everybody has to grow. Whether you’re 35 years old or whether you’re 20 years old, you have to find a way to grow. We did that tonight, we enjoy it on the plane, we park it, and get ready for tomorrow.

McLellan, on how the team grew in the win:
Well, the start was growth. We were able to put a team on its heels. Being resilient later on in the game was important. Scoring on the power play, we count on the power play to get us something and we executed something we’ve worked on very well. There are other areas – there’s individual growth, better board work, better around our net, so there were a lot of areas that we improved on tonight.

McLellan, on factors that led to such a dominant first period:
We had everybody engaged. We didn’t lose momentum from shift to shift, and a lot of times when only half the team is going, you build it and you give it back, you build it and give it back. Tonight, we maintained it, shift after shift. I was impressed to see guys play within structure. I thought we looked fast, which is something that we’re stressing as much as we possibly can. We didn’t play a cute game, we played a direct game. Those are all things that we talked about over the last three or four weeks.

McLellan, on the decision to double-shift Ilya Kovalchuk:
The three of them were challenged – Kovy, Carts and Kempe after the Edmonton game. I don’t think they were particularly pleased with their group’s play or maybe individual play, and we challenged ‘em, we gave ‘em another opportunity and they took advantage of it. So, we quickly recognized they were in the game and got them a lot of ice time. They earned it.

McLellan, on going back frequently to Matt Roy after a difficult first game:
That’s where we’re at as a team. As a coaching staff, we’re still trying to figure players out. To jump the gun a little too quick on them isn’t fair. We have to show a little belief in the players that they can recover, and Matty probably didn’t have the game he wanted in Edmonton, but he showed up tonight, really positive impact on the outcome here.

McLellan, on whether the Doughty-Tkachuk rivalry is “wonderful” for hockey:
I think it’s great. The personal rivalry between the two, the team rivalry, the intensity that both of them bring – when you buy a ticket, you’re going to watch those two closely and nobody went home disappointed, I’m sure, with Tkachuk’s or Doughty’s performances tonight.

McLellan, on whether this was an example of using Drew Doughty’s candor in a positive way:
Yeah, I guess you could say that. Drew’s a colorful guy. The star players in the league now, they’re personalities, they’re entities, if you will. Drew is that, and we want him to be respectful of the Kings and his teammates and our community, and certainly Drew as well, and he’s been that. Every time he talks, he speaks from the heart, but he goes out and he backs it up tonight, and Tkachuk did the same thing. So, t hose are two great players. If you’re a fan, you want to come and watch that. Really good for both of them.

Drew Doughty, on an emotional end to the game:
I mean, as much as I love getting booed every time I touch the puck, you kind of want to shove it in their faces, and before that overtime started I know I had a great opportunity, and I was like, ‘every time I get that puck, I’m ripping it,’ and Kopi made a great pass. It was a lucky shot. It hit their stick, it went top corner, but luck comes to good people, I guess, and good teams.

Doughty, on whether the win felt like “poetry”:
I don’t know. Honestly, I want to put that to rest. Like, that’s over. As you can see, we both thrive under emotional games. I think he had three points, I think I had three points. Yeah, I just want to put that to rest. He’s going to run me, that’s his job, he’s going to hit me many times again, and I’m just going to not talk back and let it kind of be.

Doughty, on what happened after a dominant first period:
I don’t know, we stopped making plays, we started sitting back, we started high-flipping pucks out of the zone, we started just chipping it back to their D-men when we were exiting our zone and stopped making tape-to-tape plays. When you do that against good teams, especially a team like Calgary, they’re going to come back and tie up the game. [Reporter: Were you calling for maybe a high stick?] I thought for sure that was. Obviously, I didn’t see the replay, so I maybe should’ve just kept my mouth shut. But I don’t know. It looked like a high stick from my position, but obviously it wasn’t.

Doughty, on Jack Campbell being a good team guy:
Yeah, you always hear guys talk about ‘who’s the hardest working guy,’ and that guy’s the hardest working guy. You should see him after practice. He’s as red as a tomato and can barely move. He works his bag off, he’s a really good pro, a great person and a great goalie. He played great for us tonight.

Doughty, on getting “a little bit run” in the game:
Yeah, they were hitting me late, too, a lot. Whatever, it’s part of the game. It just makes me play better, so keep hitting me. [Reporter: Does it make the overtime goal that much sweeter?] Not the hitting part – honestly, you guys made it better, because you guys keep talking about this and making it bigger than it is. Maybe not bigger than it is. It’s a pretty big thing. Obviously, you just go home – I turned on the TV before my pre-game nap, and all I see is my face all over the TV, so I shut that off. So, yeah, you guys make it a bigger deal than we deal than we do about it. Like I said, he’s just trying to play a good game, and as much as he doesn’t want to say it, he knows I’m a really good player and he’s trying to get me off my game, but really, he’s just feeding into my game.

Doughty, on his first thought after scoring the game-winner:
I don’t even know what I did. I just started yelling at the crowd because they were booing me all the time.

Jack Campbell, on a strange game without much action:
I never make excuses, but that was hard. Just a little rusty. I was hoping to see some pucks early, but you know what? I’m never going to complain when the team’s playing that well, so it’s just one of those things that’s a learning experience for me. I mean, I’ve just got to watch the video, think about maybe what can keep me a little sharper in the game, but you know what? I’m just happy the boys played so well, and we got a big two points. I’ll learn from my mistakes. We probably should’ve won that game easily 3-0. I’ve just got to learn and be better next game.

Campbell, on Doughty being a “team guy”:
Well, I feel like the media gives him a perception, but I don’t think anybody would trade that guy for anybody in the league to have on their team in this locker room. He’s just the ultimate competitor – I mean, what a leader he is and he shows up. The other guy played well too, but that was a good battle of two really, really good players, and actually we have a great one right here, so we’re really lucky to have him.

Campbell, on the length of time since his previous start:
Like I said, learning experience. I’m not really happy with my game, but I’m really happy the team fought through the adversity. Two points is awesome in this building – they’re a really, really good hockey team, and it’s early in the year and we’re just trying to get as many wins as we can, so I’m happy with the group.

Blake Lizotte, on the team’s first period:
We executed our game plan, the forecheck, especially. When we’re forechecking well and throwing pucks on net, I think we had 14 shots or something the first period. That’s our game. Throw pucks on net, retrieve it. I thought we played with a lot of energy and executed the first period – that was big for us. The second period, we weren’t bad in some areas, we weren’t good. So, yeah, definitely clean it up as we go on, but we were really happy with our first period.

Lizotte, on whether this game was an example of him having confidence to play his game:
Definitely. I think with each game I play, I get more confident. You kind of understand the league a little more and there’s less unexpected things that happen, so yeah, with each game you feel a little more confident, and I was really happy with my performance tonight as opposed to in Edmonton. So, hopefully keep building on that.

Lizotte, on whether his first NHL assist felt good:
Really good. It’s almost like a relief, you know? You play a couple games and you hope to get one, but it’s nice to finally have it come.

— With the win, Los Angeles improved to 99-115-30 all-time against the Calgary organization, a record that includes a road mark of 40-67-17. The Kings improved to 6-3-1 in their last 10 trips to Scotiabank Saddledome. These teams have three games remaining: October 19 and February 12 at Staples Center, and December 7 at the Saddledome.