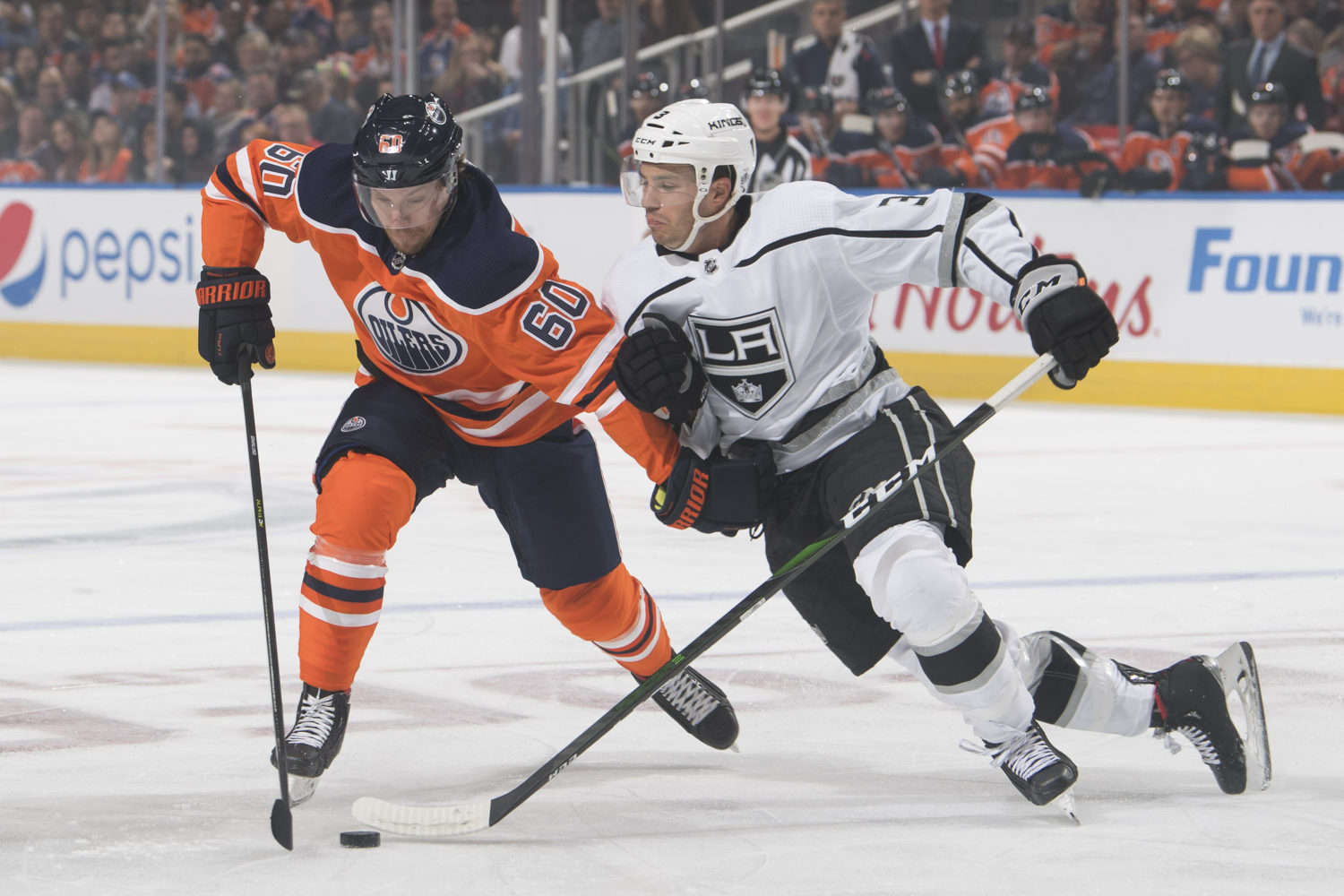 Todd McLellan, on the team implementing what they’d learned in training camp:
Well, there was some really good stuff and then there was some stuff that we obviously need to work on. The five goals for our team is something that we’re happy with. This team struggled to score in the past, but the six isn’t going to cut it. You look at some of the miscues that we had, whether it was off a faceoff or shooting it into our own net, that has to be cleaned up. So we’ll look at the good, and we’ll try and advance that and obviously work on the defensive side of it.

McLellan, on coaching against Connor McDavid:
It was the same as when you’re riding him. You’re kind of in awe of his ability to create using his speed. He doesn’t always have to score, but he creates opportunities for his teammates and he creates penalty situations. I think we were short six times, and I’m sure he drew two or three of them, so he’s one of the top if not the best player in the league for a reason.

McLellan, on Michael Amadio’s line and the importance of Amadio to continue his strong preseason:
Real important. I thought their line did a tremendous job. They did a lot of things to keep plays alive, they checked, I don’t believe they were scored on at all, when they were called upon to penalty kill they did a really good job, so that was the one real good solid line we had that didn’t give up much and got us on the board.

McLellan, on any special interaction upon returning to Edmonton:
It’s always special to come back to an arena where you spent years, and this was a special place for me, but I have a new home now. I’m really happy with that group in there, I’m happy to be part of the Kings family now, and coming back was nice seeing a lot of familiar faces, but I felt that this turned into more about me coming back than the Kings playing their first game, and that’s not what I wanted, but that’s something that was completely out of my control. [Reporter: Do you feel like it’s something that some of the players kind of started to take on a little bit?] No, just the – nobody asked me today who was the best player in camp, and Tony Bjornfot was a hell of a good young player and how has Jonathan Quick been? So, those are questions I normally get asked when I come into town, especially a Canadian town. I rarely have to talk about myself, and that was a little different today.

McLellan, on Tobias Bjornfot:
I think he was fine. You could see him make a lot of plays. His rounds are on the major league, and when 97’s coming at you that fast, you don’t get to practice that at all anywhere in Sweden, anywhere in junior, or anywhere in training camp. That’s just the way it is, so he’ll be better for it next time. He wasn’t the only one that had trouble handling his speed. We had some veteran players out there that had trouble with him, and after me there’s going to be 30 other coaches that come in and answer the question in the same way I just did.

McLellan, on a back-and forth-game:
First of all, we didn’t want to get into a track meet with that team, and it kind of ended up that way. A lot of strange goals tonight. We scored some oddball goals that we’ll happily take. We gave up some ones that we could play another 10 or 15 games and we may not see them again, and is that preseason, eight-days-off rust carry over? I don’t know, but I know we have to clean it up.

Anze Kopitar, on the loss:
First and foremost, you can’t expect to give up six goals and win the game. It’s not going to happen very often. Obviously scoring five goals, that’s encouraging, but at the same time we’ve got to clean up on the defensive side of things and make sure six was just a case of the first game of the season.

Kopitar, on the swings in the game:
The game was going back and forth – they had chances, we had chances. They score the first minute of the game, but then we respond. We make it 5-4, and at that point you’ve got to lock it down and make sure that’s the case and we failed to do so.

Kopitar, on what he picked up in the first game under McLellan:
Communication on the bench, I think. Very energetic, very loud. He’s trying to obviously teach us. Just all in all, it was an upbeat bench, and that was a good thing for us.

Drew Doughty, on battling with McDavid:
I love it. [Reporter: What’s it like?] It’s almost impossible sometimes, honestly. He just glides by guys. You lnow what, some people say he’s the best player in the league, some people say other guys are, but the difference for me with him is – I love playing against the other guys that have great vision. They compete hard, but if they don’t have that speed, they’re not as intimidating as Connor McDavid is with that speed, because he has all those tools with that speed. I took that penalthy, he was gliding by me, literally, and I’m like bagging myself to get it. It’s so hard to play against him. I thought my buddy here Bjorns played great against him. He had some good battles with him, too. I love playing against Connor, but I realize a lot of the times he’s going to make me look foolish, and that’s just the bottom line.

Doughty, on getting hits in against McDavid and Zack Kassian:
Oh yeah. I got Draisaitl too, so I got all three of the big boys. I obviously enjoy playing physical, but the thing I’m most looking forward to doing is not being on for any goals against. Unfortunately, I got pickpocketed by McDavid and they made two nice plays after that. There’s another time where he kind of got me. I thought I had him, and he let me win the body position and just lifted my stick, so I just should’ve won that battle.

Doughty, on Bjornfot:
I thought he played very well. I thought we worked well together. Earlier on, I thought he was better than me. I thought I wasn’t great in the first period. I love playing with him, like I’v said so many times, and he showed tonight he can handle playing against the big boys.

Doughty, on the swings in the loss:
I thought we played hard, so I’m happy about that, and I thought we tried to do the systems to the best of our ability. I thought we gave it our all, but in the end we lost the game and we should never lose the game when we’re up 5-4 with however many minutes left, and literally they scored a minute later, so that can’t happen.

Doughty, on what he liked and didn’t like about the structural execution:
I didn’t like that we gave up five or six goals. I really didn’t like that. But that’s one of the best neutral zone teams in the league. They get their feet moving and its really hard to play against them and I don’t really know what to say. They played well, I thought we played well, but I would’ve obviously liked to get the win.

— With the loss, Los Angeles fell to 86-88-39 all-time against Edmonton, a record that includes a 39-51-18 mark on the road and 1-7-0 at Rogers Place. These teams have three games remaining: November 21 and February 23 at Staples Center, and December 6 at Rogers Place.

— Tobias Bjornfot logged 15:02 in his NHL debut, finishing with 2:26 of shorthanded time and a minus-one rating.