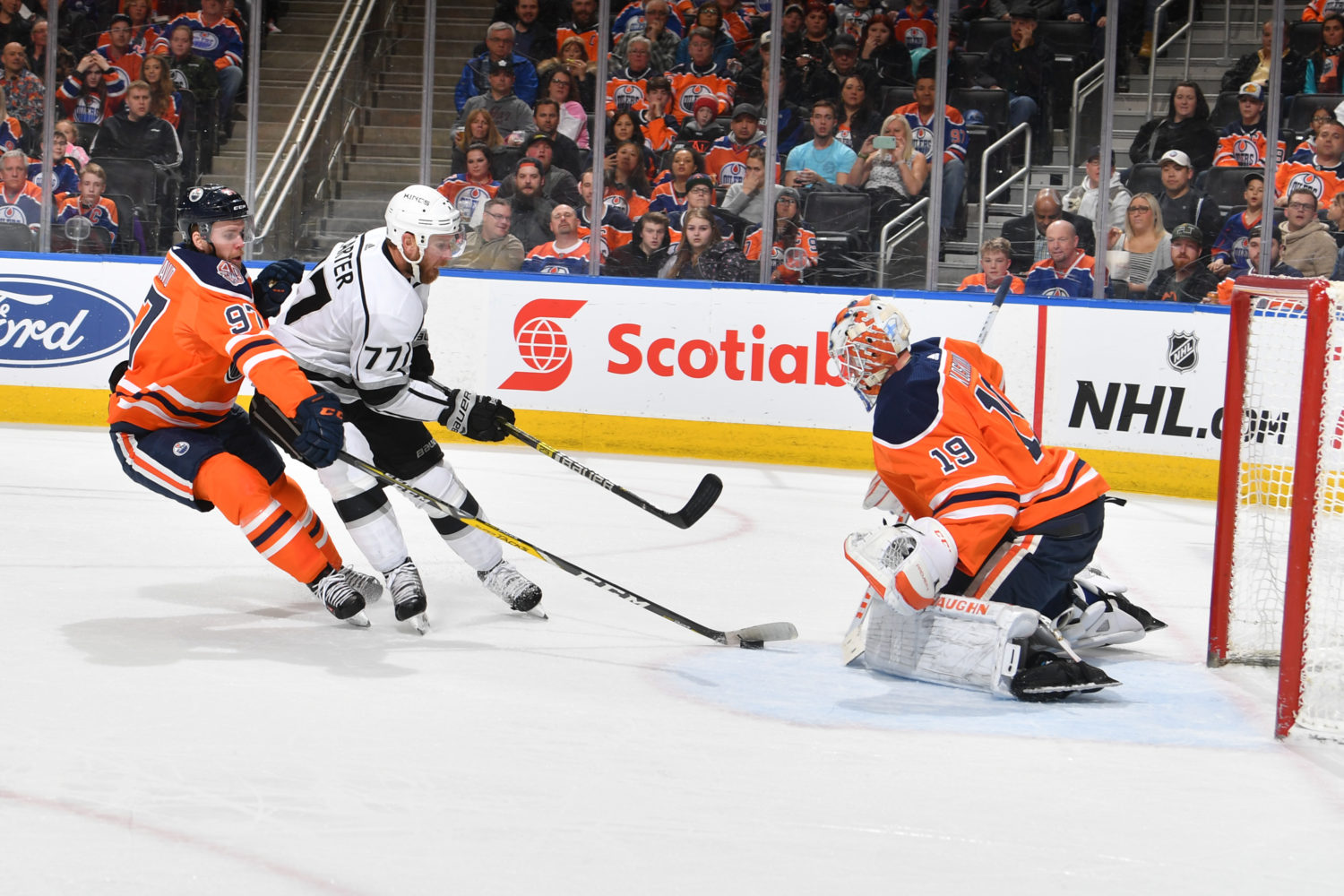 INSIDERS. Two stories dropped somewhat simultaneously. There’s today’s McLellan report (below), and the video and audio preseason recaps. They’re particularly useful if you didn’t pay an extreme amount of attention during rookie camp, training camp and the preseason, which is understandable! Not everyone is at the level of Kings Jedi-ness where they’re offering shift-by-shift evaluations of Jordan Spence’s preseason game. My dad, a season ticket member since 1995-96, told me in temple this week that he’s been hearing about This Good New Defenseman. For many – but certainly not all! – the attention really starts this weekend. So, please, check out Jesse’s podcast and the videos put together by LA Kings Production, and you’re well on your way towards an abundance of preseason reports and observations and Lebowski references. Thank you, as always, for reading/watching/listening/shaking fists.

I wasn’t planning on getting anything from Todd McLellan today – there was practice Tuesday, there’s a practice Thursday, and Friday, and a morning skate Saturday – but a number of useful topics were covered, so there’s a bit of a pivot in today’s coverage just as today’s practice pivoted towards special teams.

Even before the skate officially started, the five-on-three power play unit got in its first work of the preseason, with a counter-clockwise pentagon of Kopitar-Brown-Carter-Toffoli-Doughty forming a group. (Stick tap to LAKI user @SBayKingsFan for noticing Ilya Kovalchuk rotating in with Tyler Toffoli in a thorough practice review.)

— Special teams was a focus on Wednesday and will continue to draw attention through the start of the regular season. Preseason special teams numbers are mostly meaningless, and on Wednesday McLellan acknowledged that the team wasn’t always facing top goalies or penalty killers, and were often using irregular units of their own. While he was happy with the in-zone power play work in the preseason finale last Friday, there were challenges in advancing the puck up-ice. “Habitually we’ve got some things that we’ve got to break to set up stronger play without the puck or retrieving the puck. But we’ll get there.”

As he lays the foundation of the power play amidst the overall thrust towards more aggressive and assertive play, he was asked to expand on the type of aggressive looks he’d like to generate and how the schematics will differ. It’s a learning process that forces a number of veterans to break down and rebuild several familiar aspects of their game.

After populating the units with personnel and building the routes in transition and in the offensive zone, he’s made sure to address the “why” aspect of the adjustments. As the team gains repetitions, the expectation is they’ll become more predictable to their teammates and get a firm handle of the importance of “possession over position.”

“Everybody’s got their favorite shot, everybody wants to go stand somewhere and shoot it, and it doesn’t always work that way. You can’t shoot something you don’t have, so go get it first, and then worry about shooting and scoring after,” he said.

There’s a difference between watching video and actually executing the concepts in regular season games. In practice, there aren’t necessarily breakdowns, and in game situations the staff will be able to learn who they can count on and “who goes rogue,” as McLellan said. Some old habits may exist and take some time to flush out of the system. “It is going to be an ongoing process.”

On the penalty kill, there are the assumptions that many familiar killers will be utilized, and that’s a safe bet. McLellan shared a bit that many other coaches have shared – that the most cerebral players are often the best penalty killers who naturally read and react to what’s happening around them. Of course, the courage to step in front of shots is also an important attribute when selecting penalty kill personnel.

“I can’t stand here and tell you, ‘hey, we’re going to use these six guys.’ There’s probably nine that we’ll pick from, and we’ll eventually begin to trust five or six a little bit more than the nine total, and we’ll get to that,” said McLellan, who also noted that younger players will have an opportunity to earn penalty killing time.

There was a good battle component to special teams work on Wednesday.

“There are times where we want to set up the power play for success, too,” McLellan said. “We want them to understand what it’s going to feel like and what the next step is going to feel like, but we also want them to earn it, and you can see sometimes in practice where we put noses up right against the glass, and that happens a lot on the power play where you’ve got to get to possession over position, and right now we’re going to position a little too much before possession, and we’ll fix that through being competitive and understanding release points, but it will take some time, and it could end up being frustrating.”

The power play will utilize four forwards and one defenseman, as many across the league do. One exception? Detroit, late-2000’s, with McLellan coaching underneath Mike Babcock. Nicklas Lidstrom, Mathieu Schneider, Niklas Kronwall and Brian Rafalski weren’t the worst engines to have in the garage. “We had those four guys who could all run a power play,” he said.

— So, the preseason prognostications. Bet Online, an online sports book that regularly communicates with hockey reporters, puts the Kings’ over/under at 74.5. That’s a full point higher when the first odds were published in late July! But, seriously, do the players care about what’s said of the team from the outside? Is there an understanding that the perception of the team is different than on previous October 2s?

“The majority of the group knows where they were at one point and where they ended up last year, and that was a big gulf between those two numbers, and I don’t think any body is happy with that. If you don’t know, you’re probably living under a rock, and I don’t think I need to go in there and remind them,” McLellan said. “The preseason rankings and stuff, I can guess what the lottery numbers will be tomorrow, but I’m probably not right. But I can guess. It doesn’t matter. We’ve got to play a bunch of games and do our best and see where we end up.”

— There’s no such thing as too much Tobias Bjornfot content. What’s the tougher adjustment for, say, an 18-year-old Swedish defenseman: the on-ice stuff, or the off-ice stuff?

“When he got on a plane, whatever it was, a month ago now, and came over, in his mind he probably wanted to play really well and impress, and he probably thought, ‘I’m going to start in Sweden. The team’s waiting for me, and away I go,’ and I think he’s just continued to play and play and play, and that plane going back to Sweden hasn’t left. It’s still here – for him, anyhow,” McLellan said. “So, he’s had to adjust to the pace, to terms, to new teammates, but also to life. He’s pretty mature. You wouldn’t know he was 18, but he’s pretty mature. I think he’s handling that part of it well, at least from what I can tell, and the feedback I’m getting from teammates is that it hasn’t been an issue. The nice thing about Swedes is that they generally all can speak and understand English very well, where sometimes you get players from other countries that don’t quite understand as well as the Swedes do, so he’s got a head start on somebody from another country, perhaps, and he’s able to pick things up quickly.”

Swedes! “I’ve gotten to play with a lot of Scandinavians and I’ve never met a bad one. They’re all good kids and great personalities and like to joke around,” Paul Bissonnette told LA Kings Insider during Manchester’s Calder Cup run while he lived with an 18-year-old Adrian Kempe.

— And, one last ice time note. McLellan won’t necessarily reduce it for the top players simply to allocate it more evenly. “We’ll find ice time for the guys that are helping us win, and we’ll probably take ice time away from the guys that are being unsuccessful.”

He said age won’t necessarily be a factor in its distribution.

“We’ll play them. If they show signs of fatigue, we’ll have to look at different ways of getting them rest, but when the puck’s dropped we want our best players to be playing as much as they possibly can when they’re playing well.”

Schedule makers haven't been kind to the @LAKings early: they have the longest layoff between preseason finale & regular season opener of all 31 teams (8 days). 29 of 31 teams have a 6-day gap or less. The consequence: two back-to-backs in the first two weeks of the season.