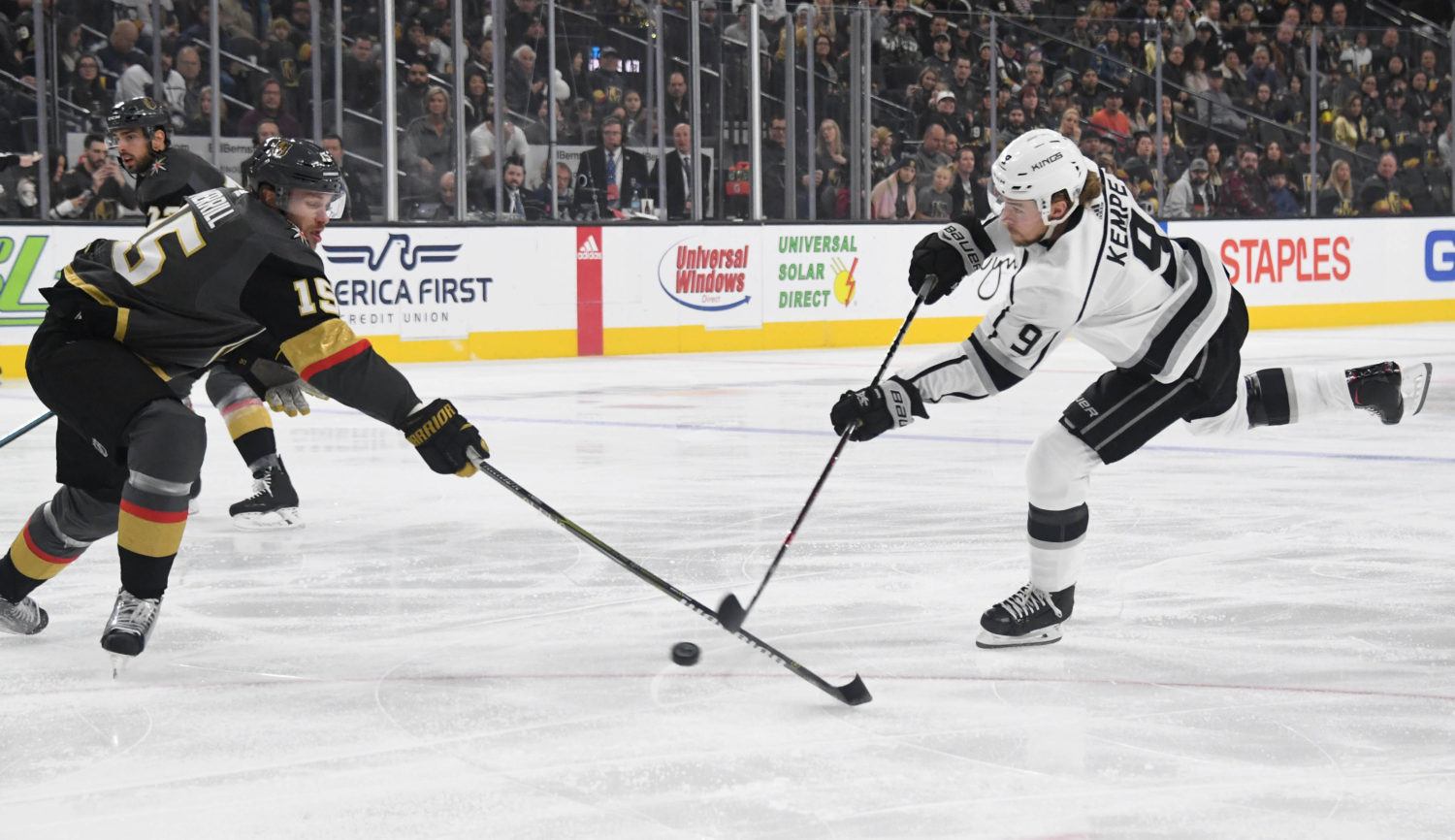 INSIDERS. A fine Friday to you. The LA Kings are expected to ice a more veteran lineup when they face the Vegas Golden Knights at 7:00 p.m. at T-Mobile Arena (NHL Network / LA Kings Audio Network) in their preseason finale. This morning’s lines and pairings:

BONUS AUDIO: Quick hits with Blake Lizotte! Lizotte spoke with LA Kings Insider about how he remains grounded and the work he puts in to strengthen his upper-body to best prepare him for NHL rigors as an undersized foreard. It’s not set in stone where he’ll open the season, but even if it’s Ontario (it might not be), his time is coming very, very soon.

— Carl Grundstrom, Mario Kempe and Nikolai Prokhorkin remained on the outside looking in during rushes, so I’m not projecting them to get into tonight’s game. Jaret Anderson-Dolan and Rasmus Kupari skated with Ontario this morning; as I’ve shared, I’m projecting both to start the season with the Reign. Jonathan Quick left the ice first and is projected to start tonight.

— So, is this game essentially a dress rehearsal? “Yes and no,” Todd McLellan said.

“We’re looking for a good team effort tonight from everybody. We’re looking for a little familiarity with linemates and perhaps getting some units together, penalty killers. Just molding a little bit more, if you will. Will this be our lineup that starts in Edmonton? I couldn’t tell you that right now, because there are some good players that aren’t playing tonight. Will it change from Edmonton to Calgary? Quite possibly, and like most teams we’ll be flexible and move guys in and out.”

More on this subject to come from the skies above the Mojave Desert. The roster is getting whittled down, but as of today there are nine healthy defensemen. Two – Sean Walker and Matt Roy – would not need to clear waivers if they were to be assigned to the AHL. Drew Doughty, Alec Martinez and Ben Hutton are the only locks. Tobias Bjornfot may play up to nine games, after which point his ELC will kick in, thus granting him free agency one year earlier. (Keep in mind that just because a player is about ready to play in the NHL doesn’t mean that a recall is imminent. “We feel we have players that are going to push … and I keep saying ‘we have to be ready for them,’” McLellan said yesterday, reiterating an important recent point.)

A lot will still happen between today and October 1, when rosters are due. Remember Dustin Brown’s broken finger in the final preseason game last year? Anyone? Hello? In any event, it’s too early to get a clear sense of whether the team will begin the season with seven or eight defensemen – even if McLellan does have a general preference there.

“I’d like to have one extra forward and one extra D, and that’s it,” he said. “But especially with your [AHL] team right across the hallway, I think misery loves company. Everybody wants to play. But there’s different reasons for keeping different individuals, for keeping certain people around, and if we do happen to have three extra players here and you’re miserable, well, we’ll find somewhere for you to play. It’s pretty simple.”

Again, just because a player opens the season on Ontario doesn’t mean they’re locked in a box and the next time you see them is in 365 days. There are players who open the season in Reign jerseys who could very well get into the Kings’ first home game.

— There’s a long break between tonight’s game and the season-opener October 5 in Edmonton. There’s a day-off Saturday, the team’s annual golf tournament Monday, and a whole lot of practice time. Today, McLellan outlined what he’d like the team to work on while they’re waiting over their golf shot, so to speak:

1) Get organized as a team.
“Lay down what’s acceptable and unacceptable right now when we go on the road, how we’re going to carry ourselves, all that type of stuff.”
2) Practice and review what they’ve done.
“We have to get some repetition in, clarify, keep working on it.”
3) Bring in some new concepts.
“We’ll have a lot of time to do a lot of that. We won’t get it all in, but when you think of power play and penalty kill, we’ll focus on those a lot. We haven’t talked anything about 5-on-3 penalty kill or power play. Power play sets, we haven’t done a lot on. It’s going in the right direction, but it’s going to take time.”

There’s certainly a prolonged process towards rebuilding and sustaining a positive, winning culture and returning the team towards contention. Even though that’s nebulous and time-consuming, wins and losses start counting next week. It would greatly aid a “proud” group to be rewarded via points for much of their learning and re-learning.

— McLellan has tried to insulate himself from extraneous opinion and analysis as to not greatly influence his evaluations on players, but one veteran was acknowledged for his buy-in during camp. “For me, Carts has had a really good training camp, and I watched some games and I heard a little bit last year about how it was just a tough year for him – coming off the injury, didn’t really get rolling – that type of stuff. For me, he’s been pretty impressive in the way he picks things up. He’s got a little bit of a spark to him right now. I hope that carries into the season and he gets feeling really good about himself and plays.” More to come on Carter in the coming days; be on the lookout for some notes on Carter by Lisa Dillman of The Athletic.

— McLellan is introducing more aggressive play into schematics, particularly the forecheck. It’s obviously more complex, but it does brings to mind the style of play Vegas has been successful executing under Gerard Gallant, who coached under McLellan for Team North America at the World Cup. When the Golden Knights lose a puck, they are hellbent on getting it right back. There is excellent cadence in their play.

“[Gallant] wants them to play on their toes. They play aggressive,” McLellan said. “They go after teams, they force you into mistakes, their D are active, they play on their toes, and when they make their mistakes, it’s usually not because they’re passive, it’s because of their aggressiveness, and I believe that’s how they want to play in that organization. I believe that’s how they’re coached.”

McLellan acknowledged that the Kings do some different teams systematically, as would any team looking to find the appropriate concert between their personnel and style of play. Of course, the “copy-cat” factor comes into play, and Vegas’ style with and without the puck has been an influence on other teams.

“I think that Chicago and L.A. confused the league for a decade because one was playing one way winning and the other was playing the other way winning, and it was ping pong balls, it was going back and forth, so you didn’t really know which way the league was going,” he said. “Now, I think there’s a little more definition to the style of play that’s being played – the speed, the skill, the tenacity of that is important. Yet, St. Louis still had a heavy element to their championship. You always need that.”

“We talked about Vegas, Vegas loses games too. But they lose them on their toes, they don’t lose them on their heels. If the team plays passive and just sits back and gets beat, we don’t really have anything to work with. We’re trying to put the tiger back into ‘em. If we’re aggressive and we make mistakes, well then we can at least adjust things, we can talk to individuals about it, but the passiveness isn’t going to do us any good.”

— Marc-Andre Fleury will start for the Golden Knights, per David Schoen of the R-J.