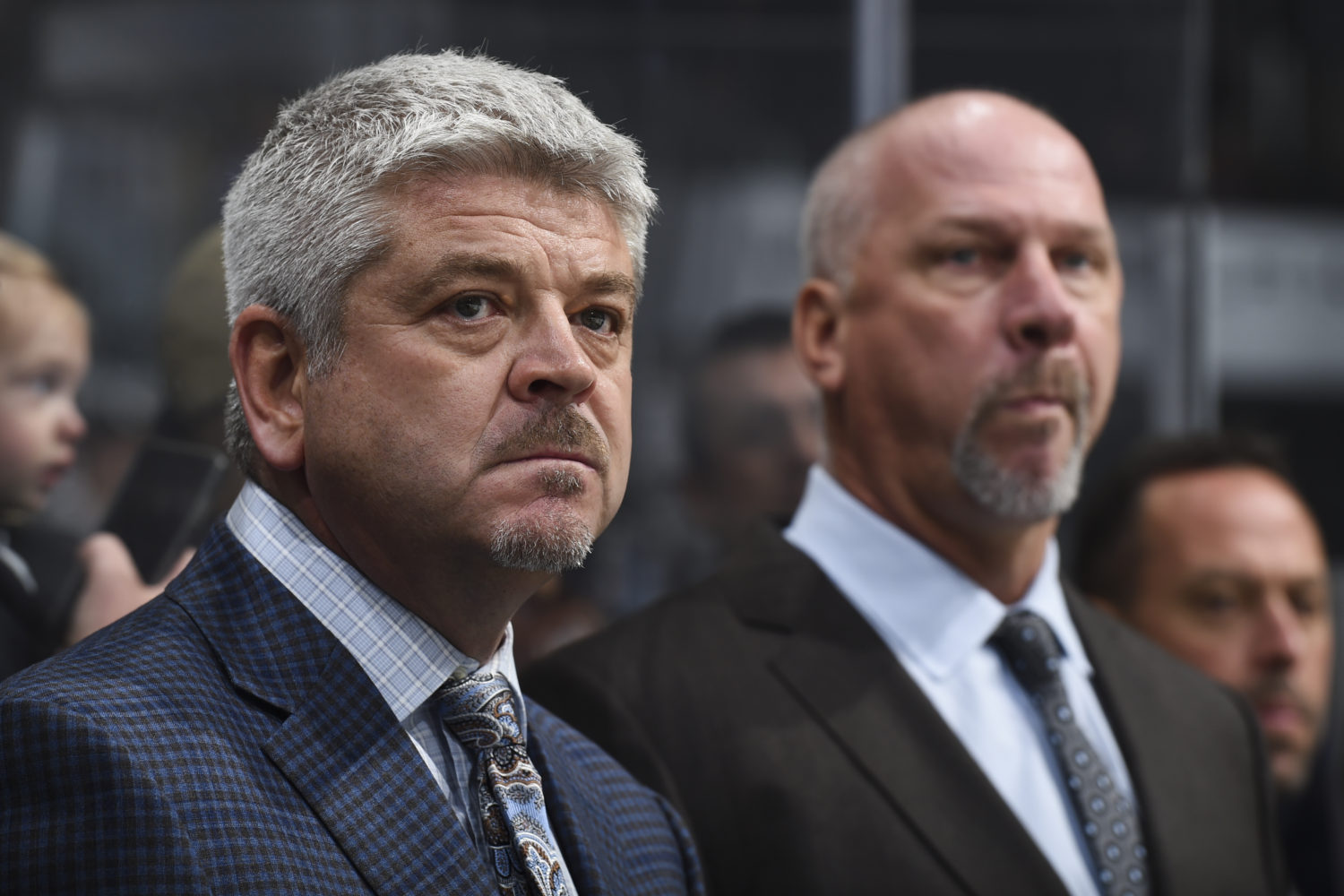 The Kings coach touched on several subjects ranging from establishing new habits, how he communicates, explaining the “why,” and establishing productive routines. With players ranging from 18-year-old rookies to established and wily veterans, every player responds differently to stimulus, something that McLellan elaborated on.

Highly interesting was his breakdown of “fast” versus “quick.” It’s been beaten to death that the Kings need to play faster, but it’s not as simple as just bringing in players that skate faster. To demonstrate what he meant as playing quickly, he recalled a former player, Joe Pavelski. Being “quick” isn’t necessarily “end-to-end skating ability,” but rather winning three foot battles, proper positioning and making sound decisions. Pavelski is no slouch in his skates, but he’s also not a notorious burner. Being “quick” is something that every player, regardless of their footspeed, can improve and that seems to be a clear focus throughout the first 11 days of training camp.

Via Reign Insider Zach Dooley, the full transcript from McLellan’s media availability below.

On the progress of breaking habits that were already in place and progressing with new ones
That question has a lot of range, because there’s so many parts of the game. We’re a little further ahead in some areas, we’re a little behind [in others]. We had a day off the other day, and it gave us a chance to breathe a little bit, reflect on what we’ve accomplished in seven days. I think we put a lot in play and they’ve absorbed a lot and now, we’re going to start looking at repetition and then building off of at what we have. We’ve added a piece almost every day. There are times when we’ve got to slow it down a little bit, because we don’t think they’ve grabbed it yet and if they haven’t, then we’ll put the breaks on everything and continue to work on it until we get it. In a respectful way, it’s like going through school. You don’t multiply before you add. You get all of the adding and subtracting done and then all of a sudden, pretty soon you’re in college and you don’t know what the hell you’re doing, because it’s stats class. Right now, we’re just simple and getting concepts and trying to knock them out. [Reporter: Is it easier with the younger guys, who maybe haven’t built up habits in a different system?]. Well, they played somewhere in good leagues with good coaches, different language, different systems. It’s more difficult for the veterans that have played together for a long time. The individuals, they don’t know Kopi’s tendencies, they don’t know what Drew has a tendency to do, they just play.

On the biggest adjustment he’s asking the group to make, from how they used to play to where they are now
I guess I’m going to answer it this way first: They won two cups, what they were doing was right. What they were doing was the right thing for their group at that time. The pieces fit, the way they played, the way they did the things they did together, it was right for their team at that time. Different pieces, different time, so what are we asking our guys to do? We still believe we can be a heavy, hard team to play against but we need a little more pace. Whatever we’re trying to do, is get a little more pace out of our players, starting in meetings, hopefully they’re happening faster. The practices, the execution, just playing with pace, that’s what we’re trying to get to. [Reporter: You can play with pace without making your players faster too, right…is it more about moving the puck faster and doing things faster?] Absolutely, yeah. I remember a young fellow that we had in juniors, he looked like Connor [McDavid], but then the game started and he disappeared, because there’s no sense of how to use your speed or timing. I think, when we talk about pace, for me, there’s fast and there’s quick, there’s two types of speed. If you’re fast and quick, you’re probably a star. To play in the league, you better be at least one of the two. Fast for me is long. Quick is Joe Pavelski, three foot races, body position, thinking. So if you have both fast and quick, Connor has fast and quick, you’re probably a star.

On how he communicates differently with younger and older players
Well, the older guys, they’re a little closer to our age, so they’re doing things that we’ve already done, parenting, taking kids to soccer games, that type of stuff. Homework…Brownie’s doing homework with the kids. That is relatable and that’s a good way of talking to those players. Then you look over at the 18-year-old, he has no interest in homework or soccer games and now I’ve got to think about what my boys do and what are their days like and how to they communicate. You’ve got to kind of convert to their level and break the ice that way with the younger group. It’s a Catch 22. Certainly, the older ones are a little easier because they’re closer to our age.

On if younger players are asking for the “why” or if it’s something he knows he needs to give them
When they’re in one big group, they’re not going to put their hand up and say “hey coach”, they just won’t. So if we want to test them, we’ll do it in small groups. I’ll always tell them what we want to do and then try to explain why we’re doing it, see if they understand. Their body language sometimes tells you if they get it or not. The group’s still pretty large and it’s hard to read everybody, so you hope that everyone in the classroom is keeping up.

On if he likes that part of coaching
I think that is coaching, to me, that’s coaching. It’s not standing behind the bench and saying next, or whoever’s up. That’s the easy part. The rest is coaching.

On if he’s ever taking any formal communications courses or seminars
Not really, just observing, it’s all I’ve ever done. I’ve lived it. I think it’s part of being a parent. When we had kids, we bought that book, what to do when you’re expecting or whatever…900 pages long, never read a page. You just go, you have a child and you figure it out. You start coaching 25 years ago and you figure it out. It changes all the time, you better be on your toes just like a player or you’re left behind quickly.

On establishing a game-day routine or schedule
I like consistent, steady routine, I like a rhythm. I think the players like rhythm too. They want to know where they need to be at a certain time and pre-game skates are going to look the same. If you watch a pre-game skate, they won’t even need us on the ice by the time Christmas comes around, because they’ll be able to zip that puck around, they’ll feel fast, they’ll feel in position. Meeting times will happen relatively the same. Establish a rhythm as much as we can.