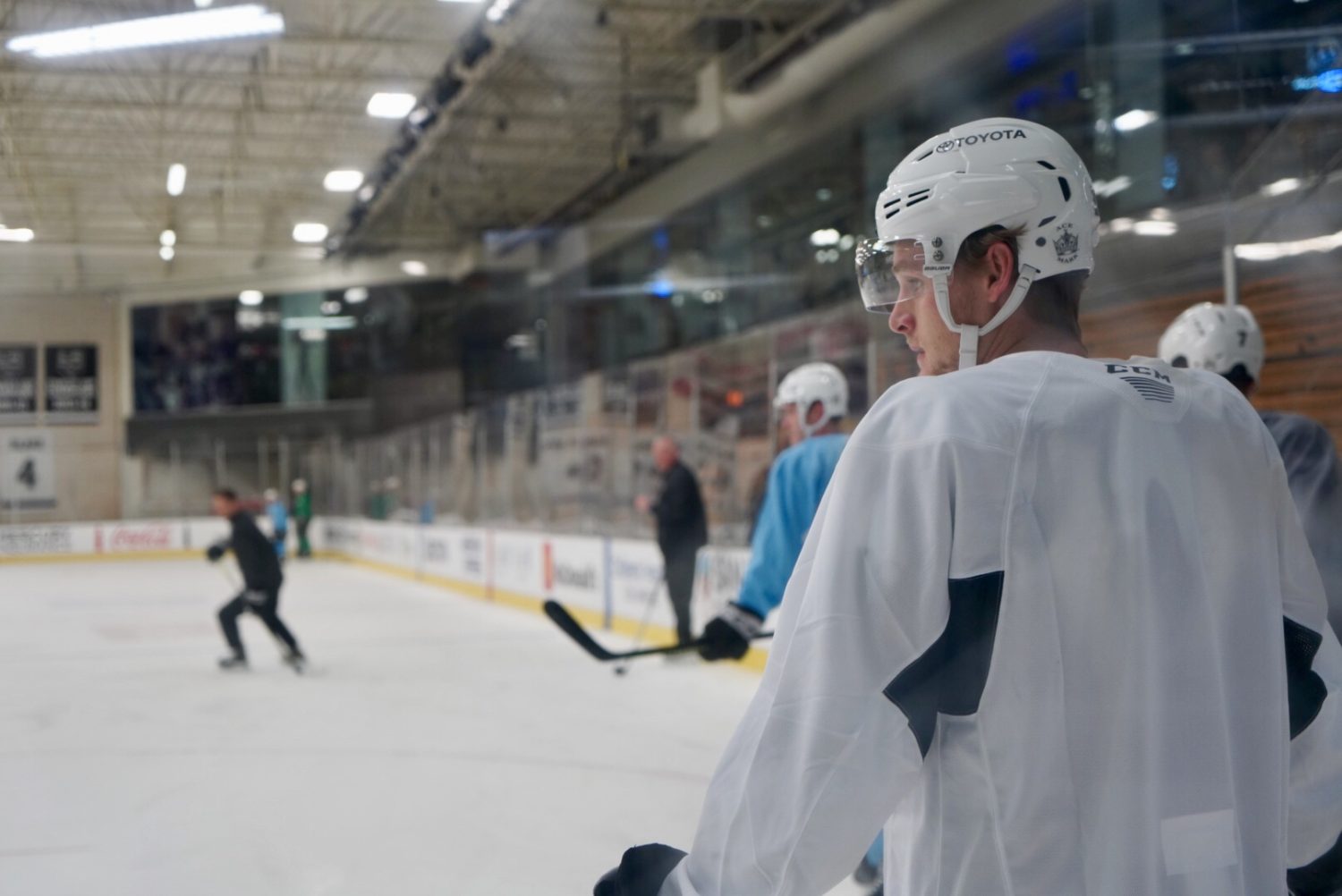 Day 1 of Reign training camp in the books, a hard, hour-long skate this morning in El Segundo.

– Kupari and Anderson have not been assigned from Los Angeles to Ontario, but skated with the Reign group to balance out lines and pairings between the NHL and AHL groups. Goaltender Cal Petersen also skated briefly with the Reign group today but was off the ice early – As Jon estimated here, Petersen could play tonight for the Kings. Forward Martin Frk did not skate with either group, as he was placed on waivers earlier today. If he clears, he’s expected to be assigned to Reign camp tomorrow.

– Lance Bouma is in camp on a PTO, while the other five non-contracted players are in camp on tryouts. Bouma is a particularly interesting player when considering the lack of experience up front for Ontario. Beyond Brett Sutter, second and third year players like Luff and Imama are the most experienced in the group, pending Frk’s status. Bouma brings good experience and pedigree to the Reign if things work out.

– The backend is already filling up. While Anderson is still a member of the Kings, 6 of the other top 7 on the above depth chart are on NHL contracts and Stanton is a veteran on an AHL deal, who is expected to be a key member on the blueline for Ontario this season. Gottlieb is also on an AHL deal and showed promise at the end of last season, while Galipeau is on a camp try out after playing five games in the AHL last season with Providence. This is ALL while considering that the Kings still have 11 contracted defensemen on their camp roster still, including the injured Derek Forbort. Somewhere, something’s got to give…

Sheldon Rempal on his impressions from Day 1
It was good, actually, I thought the pace was up and obviously guys coming in, I think they’re a little nervous. I think the skate was pretty good, guys were moving it quick. Overall, I think it was an efficient skate.

On if the NHL coaching staff gave him anything specific to work on when he was assigned to Ontario
Not yet, I think throughout this week I’ll have some meetings with some of the development coaches, so I don’t have any specific judgement right now. I’ll look forward to that this week, getting some feedback and obviously getting ready to start the season here in two weeks.

On if being assigned to Ontario serves as a motivating factor for him
Absolutely. I think there was never a doubt with me coming in. Obviously I didn’t have the camp that I wanted to and I think it was kind of the same thing as last year. I think I came in with too high of expectations and then when you don’t live up to those every game, you start to get down on yourself. I’ve just got to reset here, back being in Ontario, I’m excited. Hopefully I can get off to a hot start and be back up soon.

Mike Stothers, General Camp Impressions from Day 1
I was really happy with Day 1, actually. It was an earlier practice after a day off, and sometimes it takes the guys a little while to get going, but we didn’t have that issue this morning. They were crisp and sharp right from the get go, so that was good. We hit them with some video before practice, we hit them with some video after, they were able to get an off-ice workout in. From an execution standpoint I was happy, from a daily plan I was happy with it.

On any differences in what he’s teaching, with a new NHL staff in place and if there is an increased emphasis on tempo and pace under this regime
Everybody has their thoughts and ideas about pace. I think the pace was good with the Kings with Darryl and John, maybe it dropped off a little bit after that change, but I know Todd wants to really re-establish that. Having coached against the Kings, he knew how hard it was to play against them, one of the many things was the pace, the detail, the heaviness and physicality they played with. Is that necessarily going to stay the same? Probably not, the game’s changed a little bit. There’s more speed, there’s more skill and Todd’s trying to help that process along and we’ll try to implement it as much as possible with our group here with the Reign. The forecheck’s a little bit different, the neutral zone forecheck’s different, there’s some alterations to everybody’s systems and how the game’s expected to be played. Right now, it doesn’t much matter as long as everybody’s on board and everybody’s trying to follow the game plan, you’ve got a chance of success. If you’ve got some people resisting or not quite in tune with the way things need to be done, then it’s going to take a little bit longer. All in all, for the first couple of weeks we’ve been here, I think it’s been pretty good for both groups. I think you can see us taking that same philosophy and, as you said, we [the Reign] prided ourselves on our tempo in practice, our pace, and tried to play that way in games. We’re sticklers for details, and want to make sure everything’s done right.

On getting first-year players up to speed in the first week of practices
Oh boy, there’s a lot there. You don’t expect them to grasp and absorb everything immediately, it’s a big change for them. They’re used to coming from an environment where they were probably the big fish in a small pond and they are now maybe the guy who is trying to find where they’re going to fit in and how their minutes are going to play out. There’s a lot of things that most of them need to know, as far as how the game is to be played and more so, when you’re without the puck and trying to get it back. The play in their own zone is usually a big adjustment for all of them, whether they’re forwards or defensemen. The strength, the size, the speed of playing against men, even for the goalies, the shots are heavier, harder, more accurate…you can’t rely on your reflexes as much. It’s much the same as how it works for the defensemen. The gaps that they could have closed in juniors aren’t there, they’re going the wrong way and kind of chasing, it’s just a matter of getting used to the level of hockey that you’re playing at. I think the fact that we’ve got a couple of exhibition games against American Hockey League talent will help these guys along. There’s so many things that it’s hard to break it down in one day, one week. As we talked about last year, you and I, you like to have a starting point and a month or two down the road, see if you’ve had some progression. Certainly by the end of the year, you want to see some growth in all areas and some improvement. If you’ve done that, chances are you’re happy with the results. 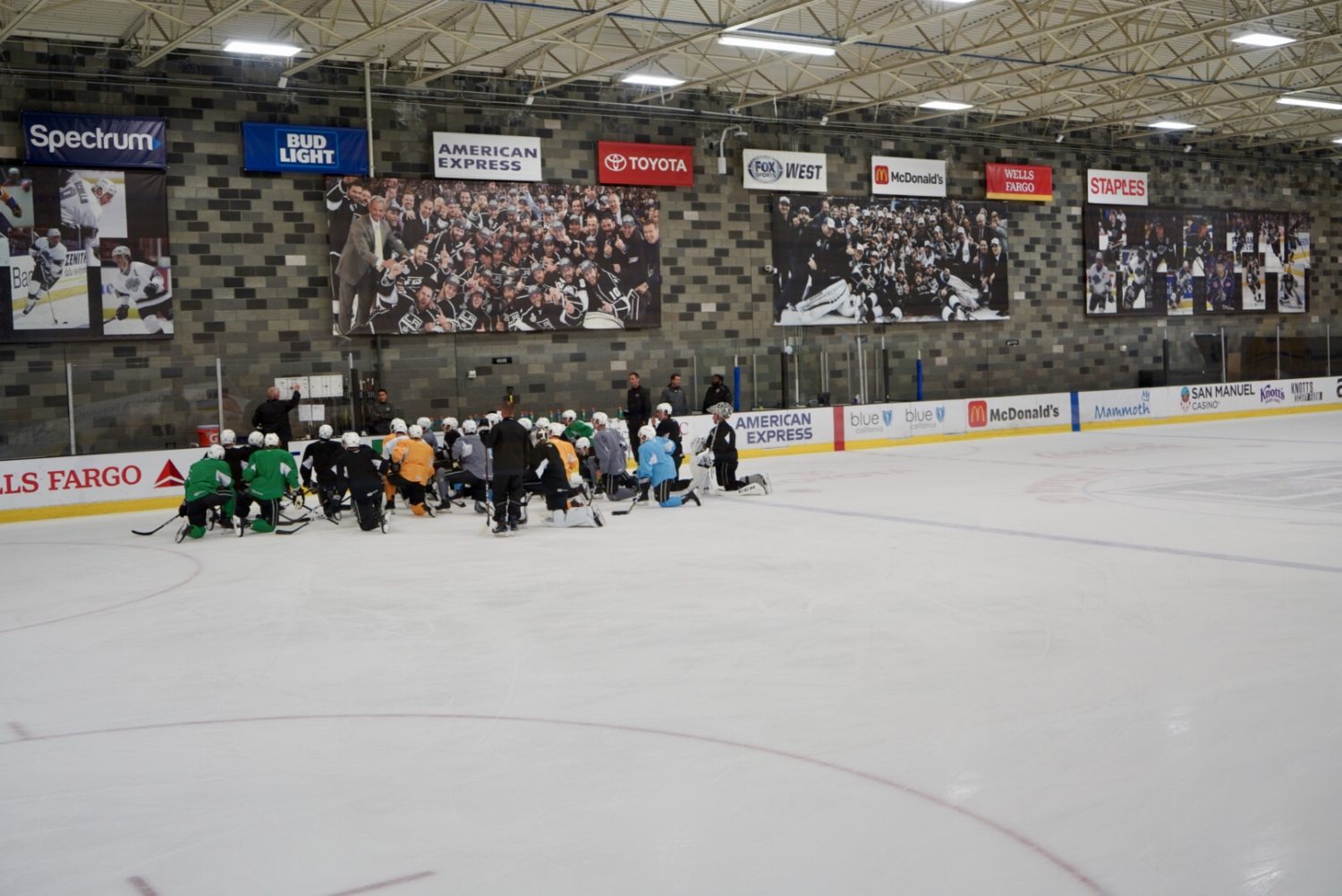