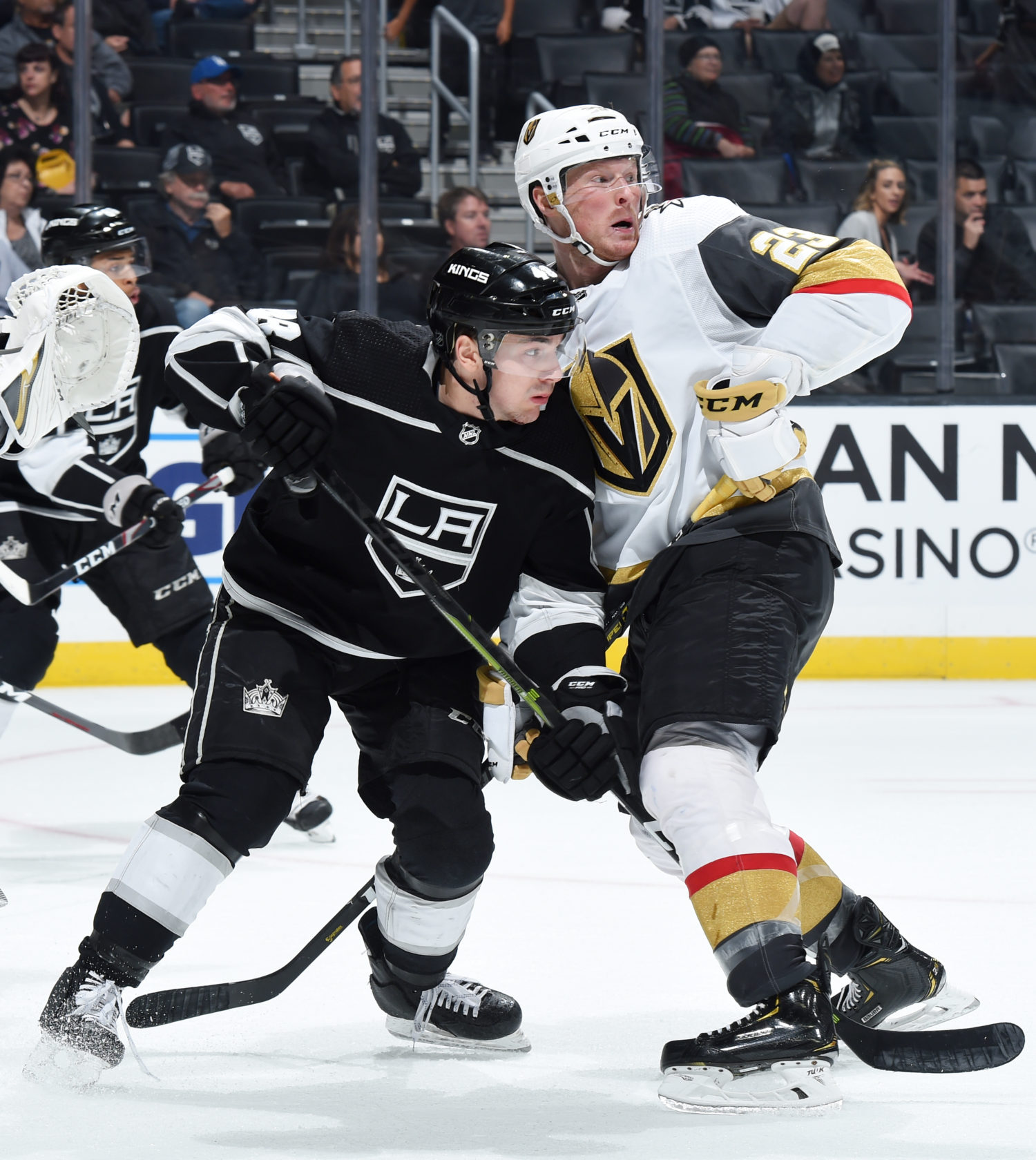 Todd McLellan, on working out a number of Kings from the previous game:
Yeah, but you know what, we could be in the Stanley Cup Final in Game 7 and there’s always going to be some stuff to fix. This was light years better, in my opinion. There was so much more structure to it, we still gave up chances and made mistakes, but that’s going to happen. This was a step in the right direction for our team. We talked about growth, we got it. Didn’t get the win, scored on ourselves, a little disappointing, a lot of teachable moments, but I thought from … Tuesday to Thursday, the team got better. Now, is that the group that played? Was that the players that contributed to tonight’s effort? Could be, or else they’re getting some concepts and the pieces are starting to work a little bit together, and I think it was a bit of both. [Reporter: What were the moments about the game that made you feel that way?] Just the structure that we saw. A lot of things that we worked on we applied in the game and we had success with. And when I break down the goals, they weren’t necessarily systematic. We shot one in our net, and we got a little casual on a retrieval and got beat up ice. And then in overtime, we put our big boys out early, they got their big boys out second, and the inexperience came through a little bit. A little hesitant, they made a nice play and hit a homerun. So, none of that really came into structural errors, effort errors, which we definitely had here at home on Tuesday night. Growth existed over the last 48 hours – that’s a good sign.

McLellan, on the Eyssimont-Thomas-Fagemo line:
That line was excellent. They gave themselves permission to play at this level and play confident. They did a lot of things really well in the game, both offensively and defensively. They created momentum shifts for us, they played structurally really strong, and I think there’s a bright future for those types of players. Are we ready yet, or are we ready for them will be the big question. Some of them still have some junior eligibility, so I think there are still things to talk about, but I think when you’re a young player and you’re getting management and coaches to discuss what’s best for the player and what’s best for the team, you’ve done some things well and we’ll need to do that with some of those players.

McLellan, on quality of play ramping up during the preseason:
It does. The play gets tougher and tougher, the competition gets better. Some players will perform better as that happens. There’s more predictability in the games, there’s more structure in the games, and we sometimes use the comment ‘I think he’ll play better with better players’ as it gets organized a little bit more. I think a guy like Kupari is showing us that. Not so much in the rookie games – a little bit better and every night getting better, so he’s doing some things as he plays with better players and around better players that we recognize, but the competition’s going to get stronger. It’s good for us. We want tough games, we want the hardest we can play against right now so we can make decisions and push our players.

McLellan, on whether his own admitted rust from Tuesday was gone:
It doesn’t go away that quick, but I felt better behind the bench, I felt more organized. For me, it’s as much knowing the players. I’ve got my card there and very seldom do you have to pull a card out and look at guys names. But here, when we’re trying to put a few power play units together and all of a sudden somebody’s down with a bad skate or a slight injury, it throws everything off whereas when you’re not rusty and you’re familiar with the group, you can just react like that.

McLellan, on whether any players exceeded expectations:
A lot of them did. That whole third-fourth line – whatever you want to call them – the Thomas line played extremely well. They played in all areas of the rink, they played aggressive and provided a lot of momentum and energy for the team, so I was excited about them being out there.

McLellan, on Blake Lizotte not loving his own performance:
It’s funny. When a coach trusts a player, it’s a lot better for the team, it’s a lot better for the coach and the individual. I’m gaining a big a big trust in Blake. When you’re able to analyze your own game as an individual. He knows his game better than I do right now, so if that was his comment and his belief, then I’m going to go with that. He also did some really good things tonight. If there’s more there and he’s going to show us more, that’s great.

McLellan, on whether he saw a lot of Blake Lizotte last season:
I did. I saw Blake and Mikey Anderson and Jimmy Schuldt. Anybody that played in the NCHC, I either saw them live or on video a lot during the winter. Had a lot of time, and they’re great players. Blake took over games when I watched him play in St. Cloud. I’m excited about him being a part of the organization.

McLellan, on whether evaluations are weighed differently when one player is a first round pick:
Quite frankly, there’s always the tag that goes with the player. The first round pick, or whatever it might be. I don’t care. I don’t care what round, I don’t care if they’re free agents, I don’t care where they came from, what country, what language. It’s about the game and what they can contribute. If we had the draft this year, Blake Lizotte might’ve gone in the first round. He’s just a little bit older, he’s got a little more experience. Age and draft spot, it doesn’t matter to me. It’s ‘can you play, or can’t you?’

Blake Lizotte, on balancing the overtime loss with the improvement shown:
Like you said, it’s the preseason. You focus on getting better each game. We felt we improved, especially the group at home that played on Tuesday. We were for the most part pretty happy with our game, but it’s a learning experience. A lot of youth in our room right now, and closing out games is obviously one of the hardest things to do, especially in this league, as it showed tonight. Vegas is a really good team, and I felt a bad bounce or two, they score, and they get momentum and sure enough, there’s two or three in the back of the net. I think it’s a good learning experience for our group. Hopefully we learn from it as we go and we don’t let that happen anymore.

Lizotte, on his momentum in camp, and whether he’s where he wants to be at this point in preseason:
Yes and no. You can always improve. I had a goal and whatever, an assist tonight, but I felt I didn’t play my best game. Sometimes you score and you don’t play well. I’m a person that likes to play well over personal points or whatever. Any way I can help the team win – whether it’s scoring, winning faceoffs, being on the penalty kill – I take pride in that, so I actually wasn’t really happy with the way I played tonight. I’m even more disappointed in the loss, but it’s preseason, so you’ve got to take the positives out of this and learn from it for next game. [Reporter: What did you not like?] My compete level wasn’t as high. I lost a few battles in the corner tonight. That’s just not my game. I’m usually really high on compete level and battle level, so I think that can get higher.

Lizotte, on his placement this season being influenced by goals and assists:
I’ve always deflected roster talk. I’m a person that just shows up every day and works hard. Whether that’s up or down or Minnesota or California – I’ve said that multiple times. Whether you’re up or down I think you’ve got to work hard and get better each day, so my focus isn’t so much on that, it’s ‘how can I help this organization win?’ Whether that’s in Ontario or with L.A., I think that’s the bottom line – helping this organization win.

Lizotte, on using Game 82 last season as a baseline, and now getting into rapid-fire exhibitions:
It was great to come in and experience that game at the end of the year. More so just to get used to the game day routine and to be around the superstars like Drew Doughty and Anze Kopitar, guys I’ve looked up to since I was five or six years old. You kind of get star struck by those guys, so to get that out of the way of ‘wow, it’s these all-stars’ was good for me in the spring, and again, they were out of playoffs last year, so it was a difficult environment. Last game of the year. Obviously, it’s a lot more intense this time of year, and I like that. But I took a lot that week I was out here, and I think I was able to use that for training over the summer.

Lizotte, on the cut on his chin:
Oh, that was in the little in-house scrimmage, one of the scrimmage days. Yeah, a puck came up and got me, unfortunately. At the end of the year last year, I’d lost a tooth in the game, and sure enough, the first scrimmage back, I took this. Unfortunate bounces. [You lost one on the very last game of the season?] Yeah, I did. Just half of it. Got a cap on there and it was kind of a good memory, I guess, looking back on it. First NHL game. You’re not a hockey player without it. [Rerporter: Well, you’ve got the cage off out of college.] Exactly, Yeah, I’m used to the cage in college. My height, I’m 5’9 on a good day, so sticks are in my face area a lot.

Mikey Eyssimont, on his line demonstrating good chemistry:
All training camp Coach Todd’s been preaching he likes the youth and he wants the youth to play with energy, so we just try to bring a lot of energy and I think it created a lot offense. First time playing with Killer and Gemo, so I think that we had pretty good chemistry to start out with and we were able to get some good chances. Unfortunately none went in, but overall I think we were pretty happy with our play. It was a lot of fun.

Eyssimont, on performing well in only his second career preseason game:
I had a lot of jitters before the game, but this group, it was kind of loose in here and kind of easy for me to just go out and play my game. I can’t thank the guys enough – I had a hell of a time out there.

Eyssimont, on balancing the overtime loss with the improvement shown:
We want to win every game, but Coach Todd’s been putting things into place slowly but surely. We’re not close to knowing all of our systems yet – we’re just slowly building, and he doesn’t want to throw too much at us at once, but we’re going to keep building on top of what we’re doing and slowly get better at it. 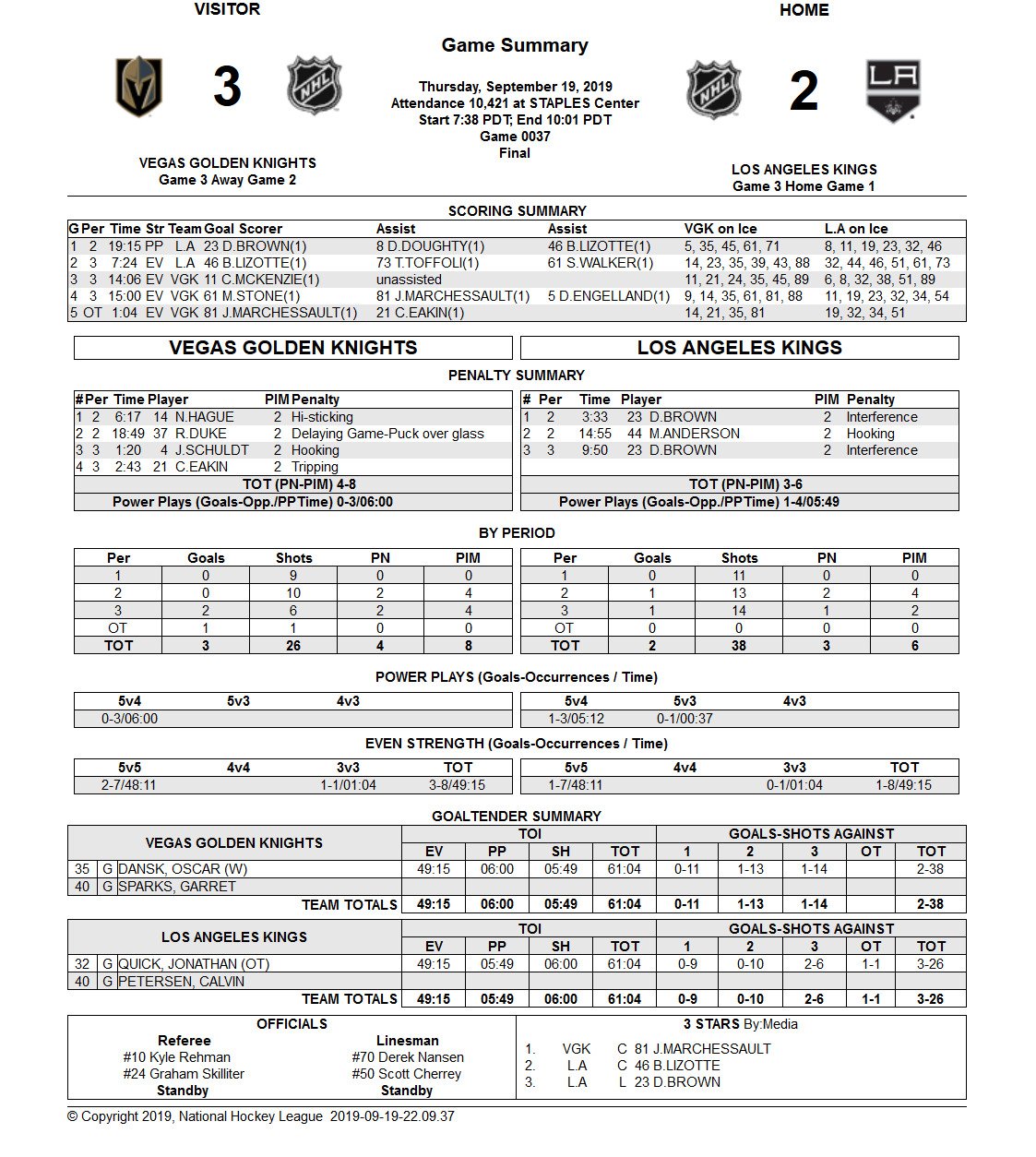 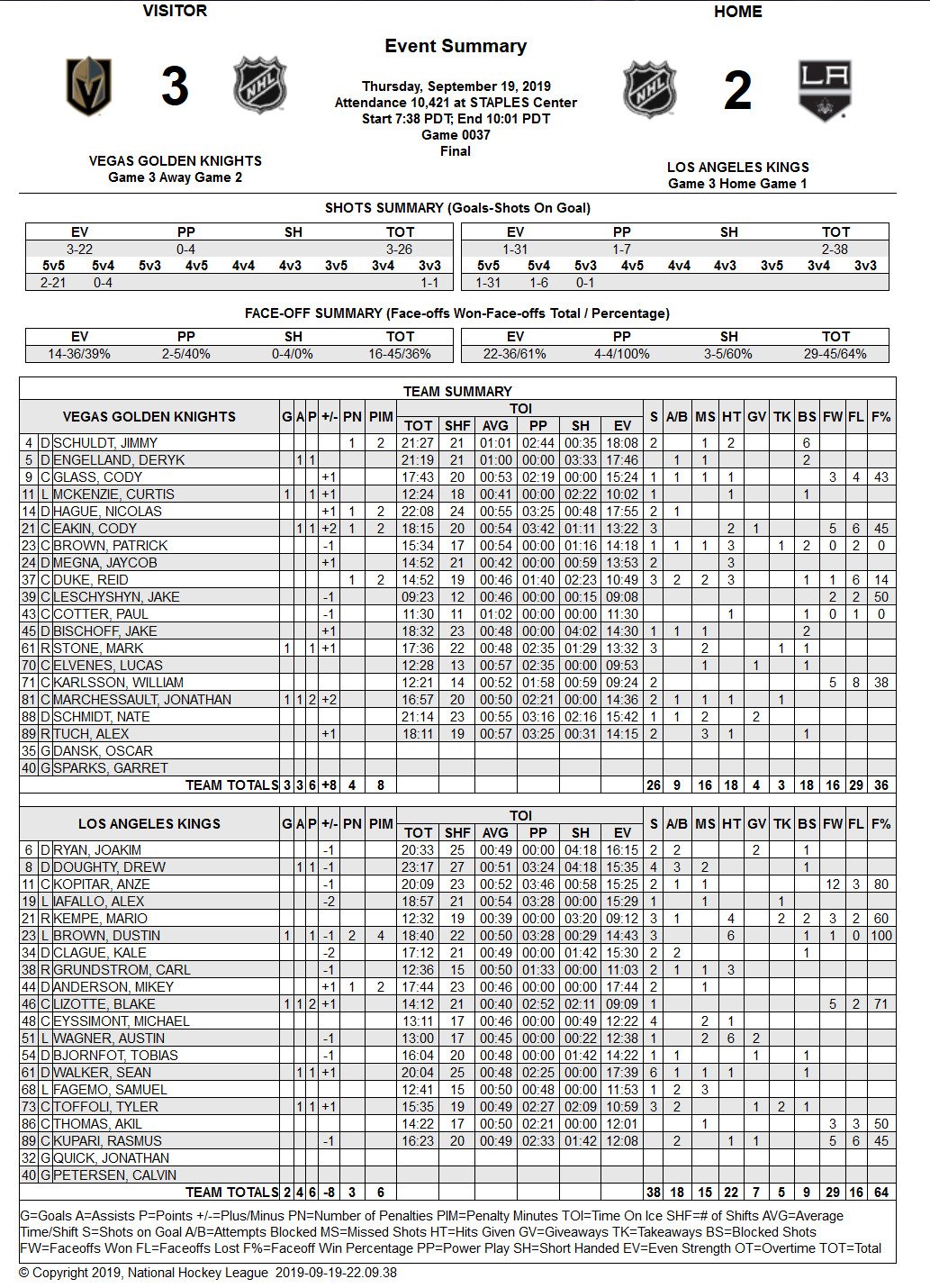 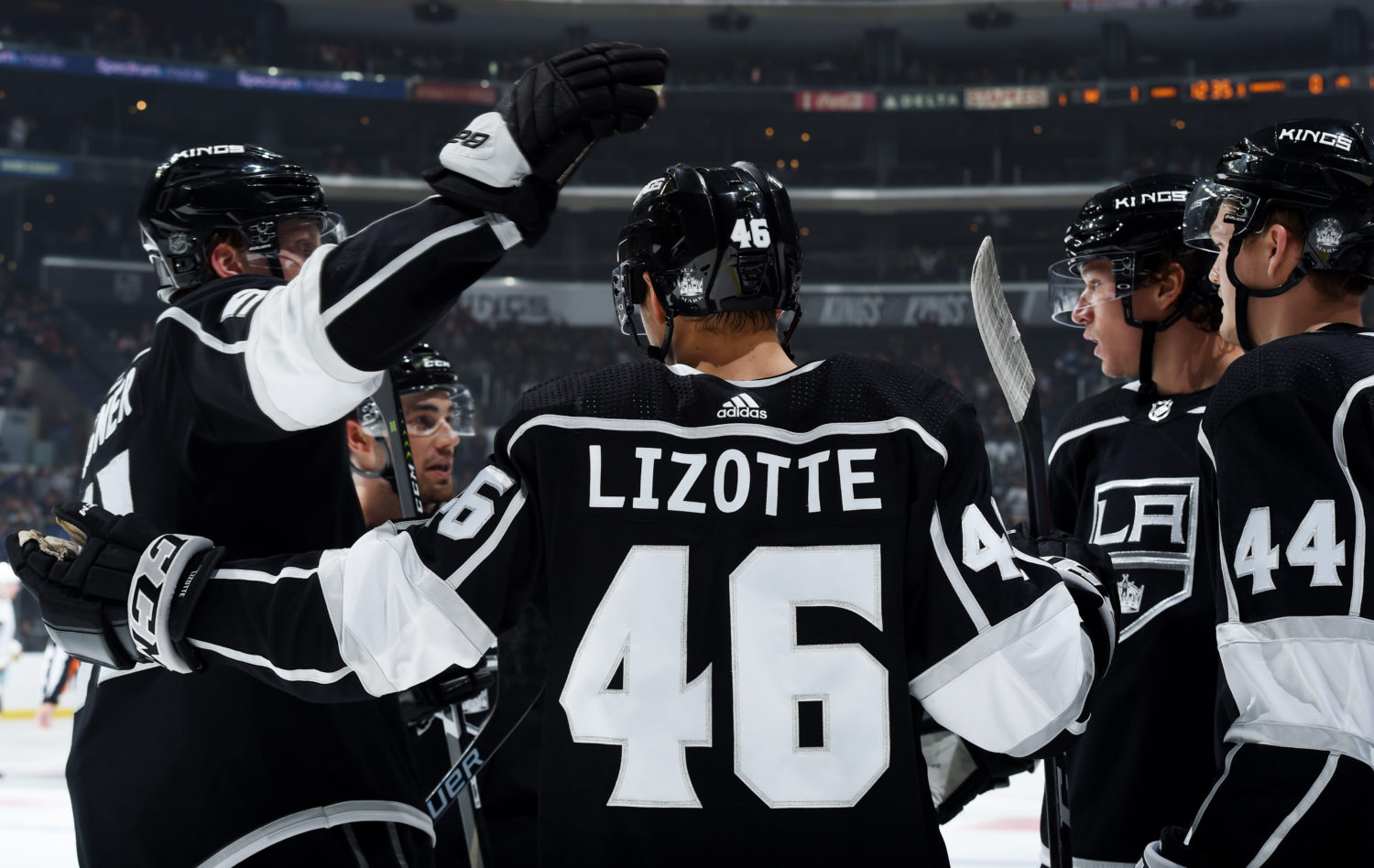