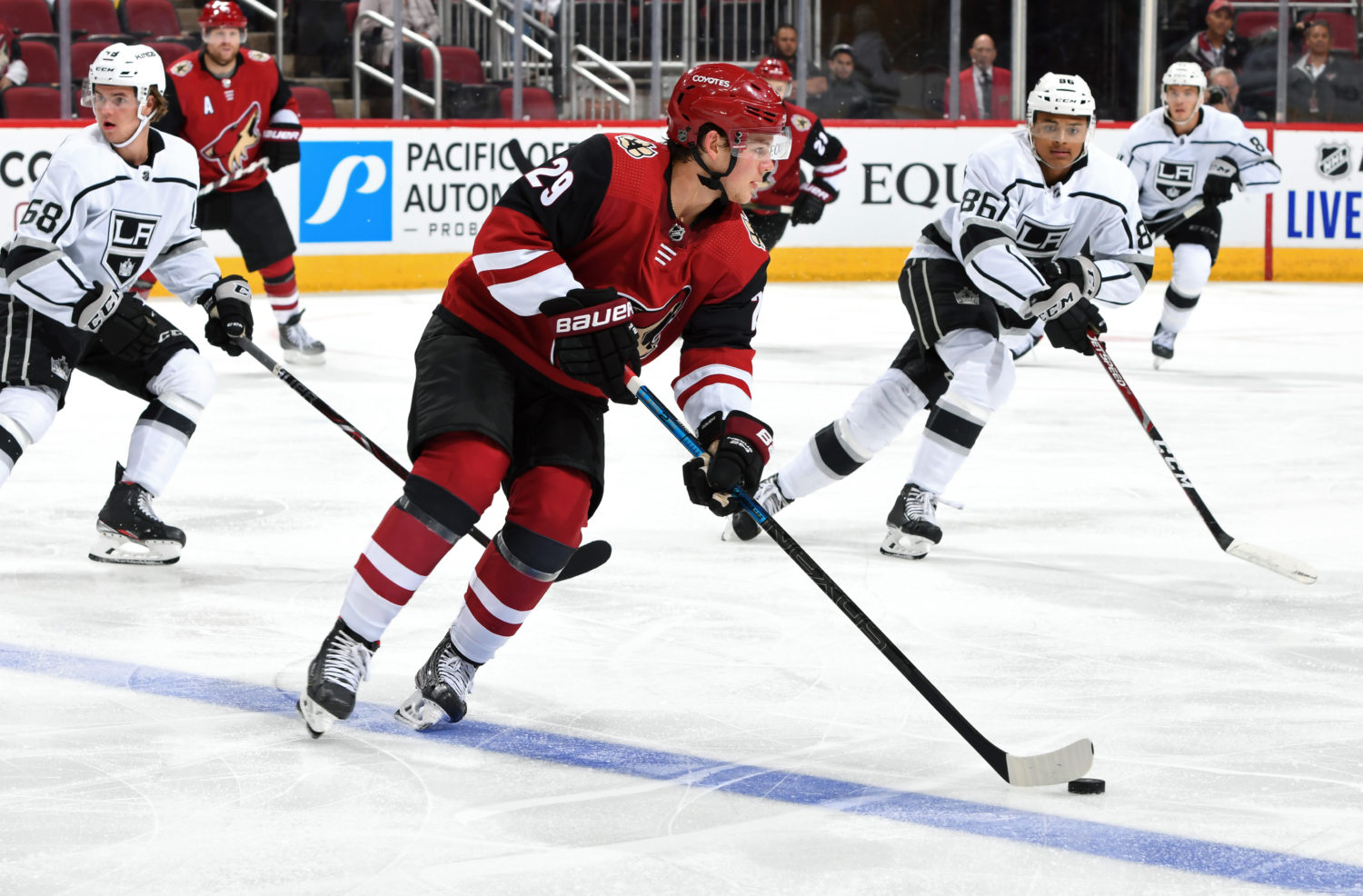 — Todd McLellan, who coached Tuesday’s Staples Center group, watched as much of the Glendale group’s 4-1 win over Arizona as was possible via video. “Sent a lot of workers there, and they got the work done,” he said. “Here in L.A. it was disappointing group-wise, but also for some individuals. So, first impressions weren’t the greatest, but we’ve got to give them a little more time to adjust and to adapt and figure things out.”

The mistakes in Los Angeles were “glaring” errors that directly led to scoring chances, and at the other end of the ice, he didn’t see enough of “net intensity on the few chances we created here.” There weren’t enough scrums, second chances or looks around the blue paint.

It’s interesting – the Arizona game group, a much younger group, forechecked extremely well. They slowed Arizona’s transition and ease in entering the offensive zone, and at the other end, made battle-plays on the opposing defense below the Coyotes goal line that directly led to offense. The L.A. group didn’t forecheck as well. Given that the structure of the forecheck has changed and the team is looking to play more aggressive, is that difference because it’s easier to impart newer concepts onto younger players than it is onto older players who are more set in their ways and structure?

“I think there is a theory behind it. I think your thought process is generally pretty accurate, it could exist,” McLellan said. “I look at our group here, the older team, I believe the willingness to do the things that we set out to do existed for about 10 seconds. Then we got scored on, and as soon as that happens, the trust factor diminishes a little bit more. Now you’ve got people doing half their job and all of a sudden you break down anymore. I’m not sure if it was the youth or the elderly, if you will, for a lack of a better word. I think it was more situational. We got backed off with an error 10 seconds into the game and all of a sudden we’re making more and more mistakes that we have to eliminate.”

There weren’t all bad things. Check-ins back at Staples Center indicated strong games from Kale Clague and Tobias Bjornfot, the latter of whom drew a very positive evaluation from McLellan when prompted.

“I thought he was fine. Very seldom was he out of position,” said McLellan, who also shared a positive impression of Clague. “If [Bjornfot] was out of position, or it looked like he was out of position, it was usually because something else broke down and his thought process was correct. He’s been very impressive. A very impressive young man. I was telling Blakey he reminds me of one of his old partners in Marc-Edouard Vlasic. Young, confident, feels like he belongs, really good positionally. You have to watch him to really appreciate him, but that was Marc-Edouard in San Jose our first few years.”

I’d heard Rasmus Kupari had skated well, and McLellan said that the young Finn “gave us some real good teaching moments. He looked like he was much more confident with the puck and made plays that maybe he didn’t make on the offensive side in the rookie tournament.”

— Thursday’s game against Vegas will likely draw a good mix of veterans into action for the first time this postseason; Anze Kopitar’s line didn’t play Tuesday, nor did Drew Doughty. Goaltenders are at the point where they’ll be expected to go the distance, according to McLellan. “For me, goaltending’s like pitching, especially early in the year. You’ve got to get them their reps, and they’re probably the last position to really polish things up,” he said. Ben Hutton was expected to arrive late Wednesday and practice on Thursday.

McLellan said that “a fair amount” of Thursday’s roster had been put together and that they were just waiting for an update “on bumps and bruises.”

“What will happen now as we go forward, we’ll mix both groups together,” he said. “There are still some really young organizationally players that are just entering that need to experience a game. We obviously believe we can be competitive and win those games, but more importantly, we’ve got to give them a night where they experience NHL hockey before we run out of exhibition games?”

— Matthew Villalta earned the save in the road win, stopping all 13 shots in the third period and denying Phil Kessel on a breakaway. He looked sharp in his first 20 minutes of NHL game action and received a nice boost of encouragement before the game. “It was awesome,” Jack Campbell said of Villata’s debut. “He was a little nervous before, and I just told him, ‘remember this one forever, so just have fun, and if you start feeling nervous, just smile and laugh,’ and it looked like he did that because he was on fire in there – it was great to see.”

— Mikey Anderson and Austin Strand were on the ice for all four Kings goals, one of which was scored by Anderson five and a half minutes into his first preseason game. The game’s first star with a goal and an assist in 14:45 of ice time, he spoke with LA Kings Insider about his debut.

Mikey Anderson, on whether it felt good to have a strong outing against a more veteran group:
Yeah, for sure. You get to the rink and you see Kessel, you see some of the guys I’ve watched growing up and played with them on the video games ever since I was six years old. You see those guys on the other side of the red line, it’s pretty cool to realize you’re playing against them. After warmups and the first the shift it’s just another hockey game. It takes a shift or two to kind of get into it, get a feel for it, get the nerves out, but after that, it’s just trying to treat it like a normal game. We’re all here for a reason, all the young guys, so it was a fun group win last night.

Anderson, on whether he found a vocal role, even in his first game:
I think I try to do that, as much as I can. Whenever you can have talk on the bench, whether it’s telling a guy what they’ve got for options. If you can tell the group, get a read for what needs to be said, right away it’s kind of relying on some of the older guys. Last night, it was nice, we had Marty out there, Walks, Royzie and Derms, four guys that have all played a fair share of NHL games. Seeing how they work on the bench, kind of seeing how they act as pros. Right now, I feel like it’s more of that, picking up the little things from them and from there, trying to implement my own style of leadership and just trying to bring a good work ethic every day.

Anderson, on what was working well between him and Austin Strand:
I think just keeping it simple. Like I said, it’s just another hockey game once we got into it. I think Strander’s played a couple preseason [games] last year, that was my first. Just doing what we need to do to be successful in our games. Getting the pucks up to the forwards, letting the forwards do their jobs and we do our jobs and it worked out well last night. It was a good group effort.

— Tuesday’s game was also one of the best exhibitions in a Kings jersey by Akil Thomas, who also finished with a goal and an assist and compiled a plus-one rating in just under 13 minutes.

Akil Thomas, on what worked well in the win:
Honestly, I thought we just didn’t give them many opportunities, we didn’t really play in the d-zone that much and that allowed us to play offense and play well. Obviously they had a pretty sick lineup, but we kind of just shut them down the whole game.

Thomas, on whether the win was based on work and being fast to pucks:
Yeah, honestly I thought our neutral-zone forecheck was really good, like they couldn’t get anything off the rush, they had to dump everything. We made a lot of nice plays breaking out of the zone and we just kind of kept the puck in their end and we kind of beat them at their own game.

Thomas, on learning the forecheck:
Yeah, I think last night was an easier experience than I thought, in terms of learning how to apply this forecheck in the game and actually do it in the game. I thought, with the amount of penalties, it allowed all the boys to have a lot of energy, because power play, guys are on the bench for a while. It came easier than I thought.

Thomas, on the feeling of scoring in an NHL game:
It felt good. It just felt good to beat that team. Obviously, they had a lot of NHL vets, so it felt good.

I thought I overheard something tangentially related to this yesterday but had a difficult time placing it. Still, I’d be lying if I said this wasn’t way out of left field when it showed up in my inbox today: 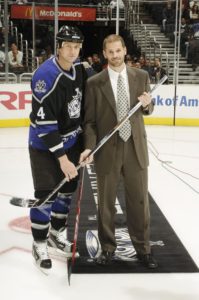 
The LA Kings announced today that Ron Hextall has been hired as a part-time advisor to hockey operations.

Hextall, who has had a distinguished career as a player and in the front office, returns to the Kings organization after spending the majority of the last five seasons as General Manager of the Philadelphia Flyers. He also spent seven seasons in LA as Vice President and Assistant General Manager with the Kings.

The netminder enjoyed a successful playing career, retiring in 1999 after appearing in 608 regular season games during a 13-year career with Philadelphia, Quebec and the Islanders. He posted a 296-214-69 record, along with a 2.98 goals-against average and a .895 save percentage. Among his accolades, Hextall won the Vezina Trophy in 1986-87 as “the goaltender adjudged to be the best at his position” and the Conn Smythe Trophy as “the most valuable player for his team in the playoffs.”

I hope to find out a bit more about what’s happening here in due time, but if personal satisfaction is worth anything, I give this high marks. Ron Hextall treated many figures – players, personnel, staff – in the organization with great class, so I’m eager to learn what this “Part-Time Advisor” role entails. More to come!