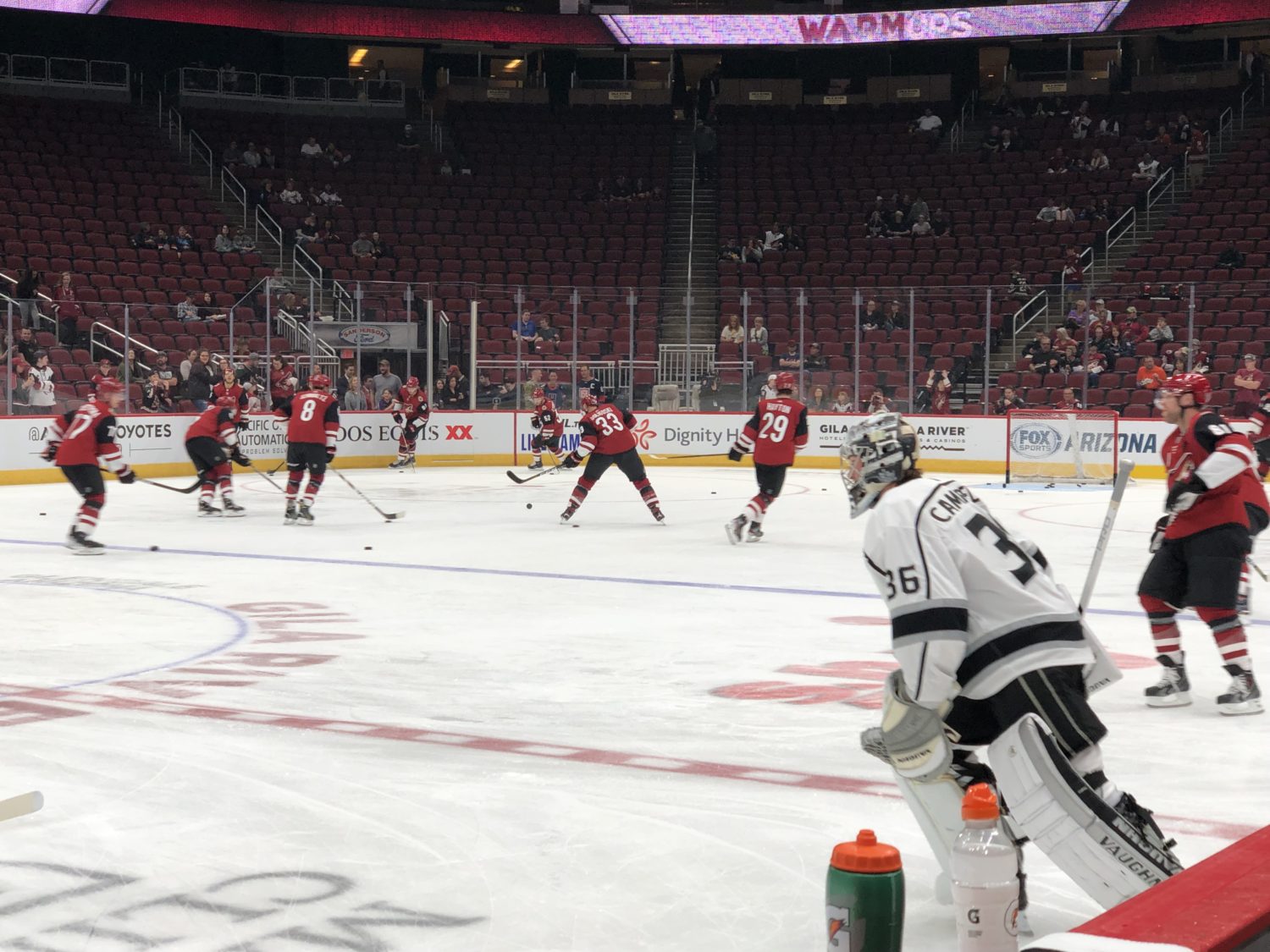 THIRD PERIOD
20:00 – Enter Villalta for Campbell (12/13) and Prosvetov for Raanta (17/21).
16:27 – Martinez blocks a B-plus Richardson bid from the right circle. Was good seeing the two catch up prior to L.A.’s skate this morning.
9:00 – Very good Villalta save on Steenbergen’s bid from the bottom of the left circle. Arizona’s shots have largely come from low-tension areas.
5:00 – Been working on a project. More to come.
4:40 – Dudas, Sodergran with looks as pressure gravitates towards the Arizona net.
3:04 – Nice rush by Fagemo, who lost the handle of the puck on a point blank chance against Prosvetov.
2:35 – Villalta denies Kessel on a breakaway.
2:00 – Heading downstairs. Talk soon.

SECOND PERIOD
18:10 – Sutter snaps a shot from the slot wide before Raanta denied his bid off an end boards carom. Good job following his shot.
16:55 – Campbell fights off Goligoski’s hammer following a Stepan faceoff win.
16:30 – GOAL ARI. 1-1. Stepan (1) (Kessel). Kessel feeds Stepan in the slot. They criss-cross, allowing Kessel to provide a screen as Stepan shots high-glove, beating Campbell.
15:23 – GOAL LAK. 2-1. Amadio (1) (Grundstrom). Simple forechecking goal well executed by Amadio’s line. Wagner makes a hit below the goal line, freeing the puck for Grundstrom, who finds Amadio in the slot. Thought Wagner should’ve received an assist on a quick look, but what do I know, I’m just a blogger.
13:37 – Martinez freed on the far post but runs out of angle, lifts a backhander into Raanta. Whistle.
13:03 – PENALTY LAK. M. Kempe for hooking Kessel.
11:50 – Two very good campbell saves in quick succession on Crouse and Merkley.
10:34 – Goligoski hooks M. Kempe, no call. How much should I protest non-calls in a split-squad preseason game?
10:17 – GOAL LAK. 3-1. Thomas (1) (Grundstrom). Grundstrom strips Bahl of the puck behind the Arizona net before feeding Thomas in the slot for the snipe over Raanta’s outstretched left pad.
7:23 – GOAL LAK. 4-1. Fagemo (1) (Thomas, Anderson). Fagemo wins a race to a loose puck and beats Raanta from the right circle inside the near post.
4:38 – PENALTY ARI. Chychrun for tripping.
4:00 – Grundstrom deflection of a Martinez point wrister. Save Raanta. Grundstrom has come on very well in this game.
1:38 – PENALTY LAK. Wagner for tripping.
0:48 – Kessel cross-crease to Schmaltz, one-timed well wide.
0:00 – Period over. Lots of late action around Campbell, who has stopped 12 of 13 through two periods.

FIRST PERIOD
20:00 – Underway in the desert
19:18 – Grundstrom look from the slot after a feed clean entry, but Soderstrom contests it and he’s unable to get a shot off.
18:50 – Nice burst of speed by Lizotte down the right wing. Clean entry.
17:43 – PENALTY ARI. Bahl for hooking.
17:30 – Amadio high-grade look in front; Raanta glove save. No rebound.
17:15 – Raanta glove save on Amadio from the right circle.
17:15 – Lizotte mostly being used high on the power play. Both units are going with four forwards and one defender.
15:10 – Good back check by Wagner to deny Chychrun of a decent look from the right circle on a 2-on-2 rush.
14:24 – GOAL, LOS ANGELES. 1-0. Anderson (1) (Frk, Lizotte). Anderson hits Frk in stride through some traffic for a mini-break. Frk tries to deke around Raanta and runs out of room, but is still able to dish the puck back to the low slot, where Anderson had activated before chipping the feed high into an open net past a prone Raanta.
10:55 – PENALTY LAK. Bouma for interference.
9:20 – Angled chance for Crouse, who gets good composite on it, but Campbell makes the shoulder save. Merkley pushes the rebound just wide.
7:31 – PENALTY ARI. Anderson catches an edge and falls to his knees, and Pederson attempts an iffy hit with him in a vulnerable position. LAK didn’t appreciate it, but nothing extracurricular.
7:20 – Excellent look. Lizotte to Fagemo, whose redirection saucered just wide of the net. Lizotte has been good through his first several shifts.
5:00 – Austin Wagner turns on the jets and blazes down the right wing past any sort of resistance but catches the outside of the far post. Puck deflects out of play.
3:30 – Huge hit by MacDermid on Merkley after an ARI zone entry draws gasps. Merkley gets back on his feet and blitzes Amadio.
2:30 – PENALTY ARI. Merkley.
1:50 – Amadio misses wide on a good look from the right circle.
0:51 – PENALTY LAK. Sutter for slashing.
0:02 – Goligoski post from distance.
0:00 – HORN.

PRE-GAME
Alec Martinez, Michael Amadio and Kurtis MacDermid are serving as alternate captains. No captaincy is assigned for this game. 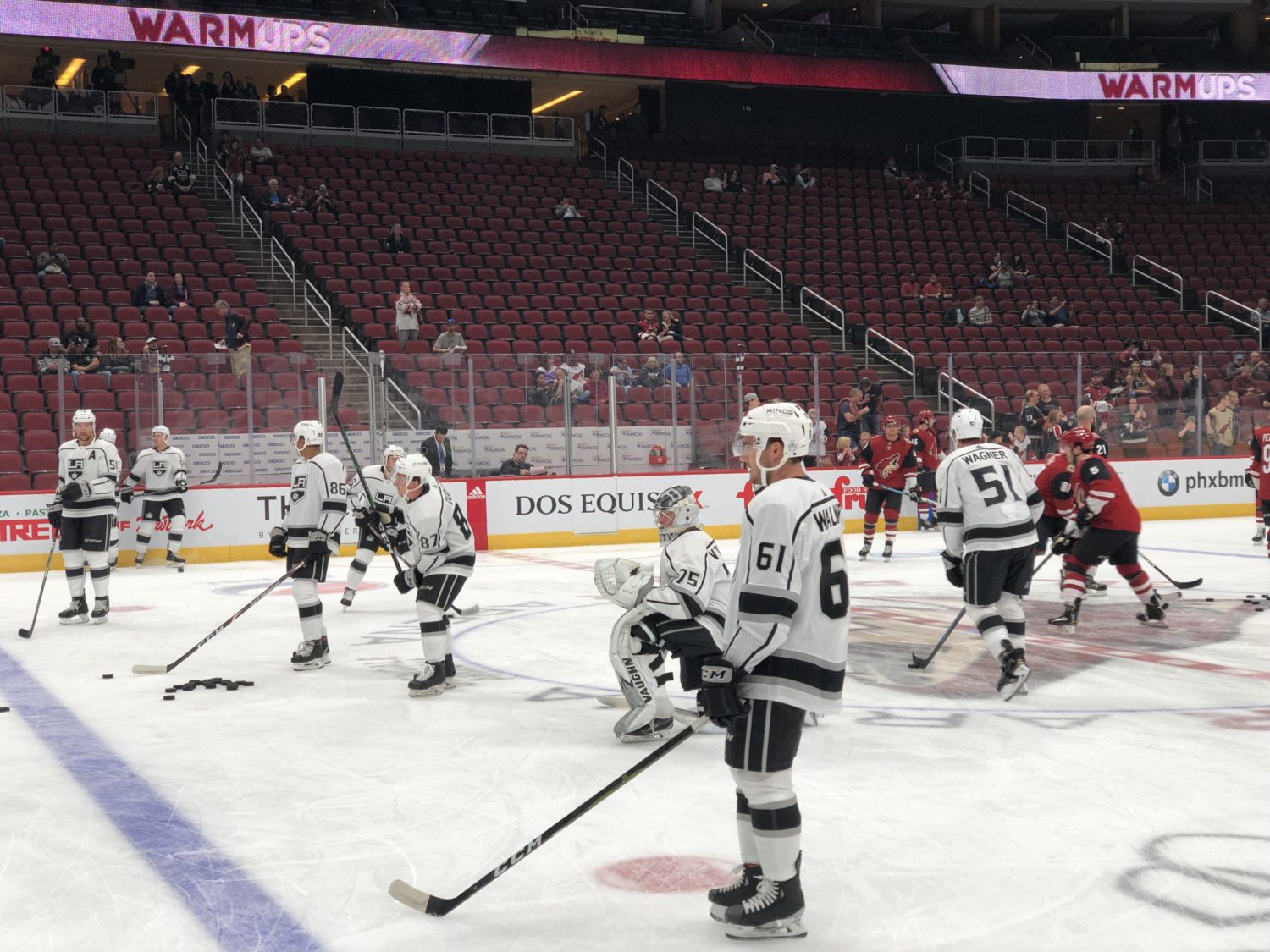 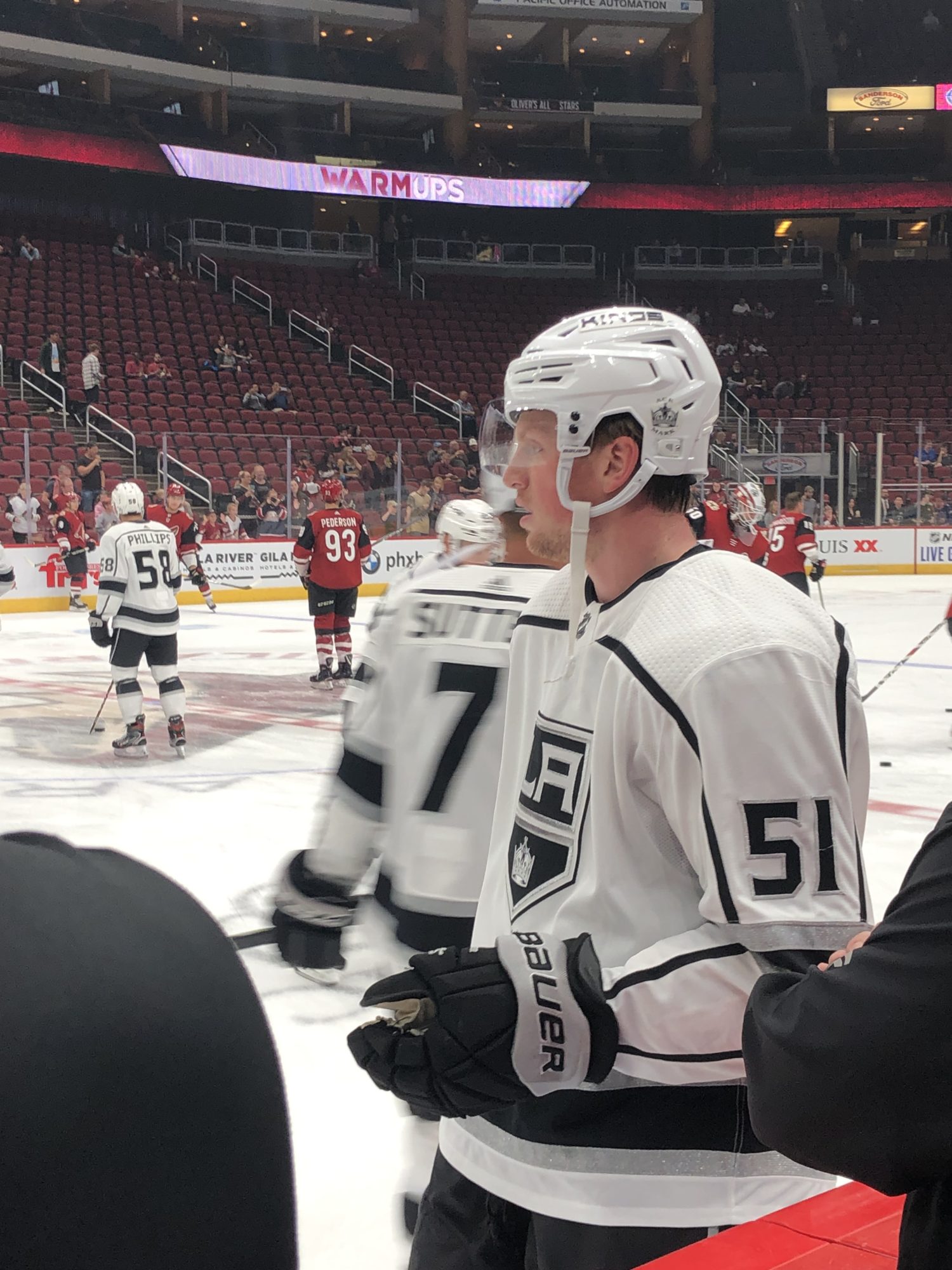 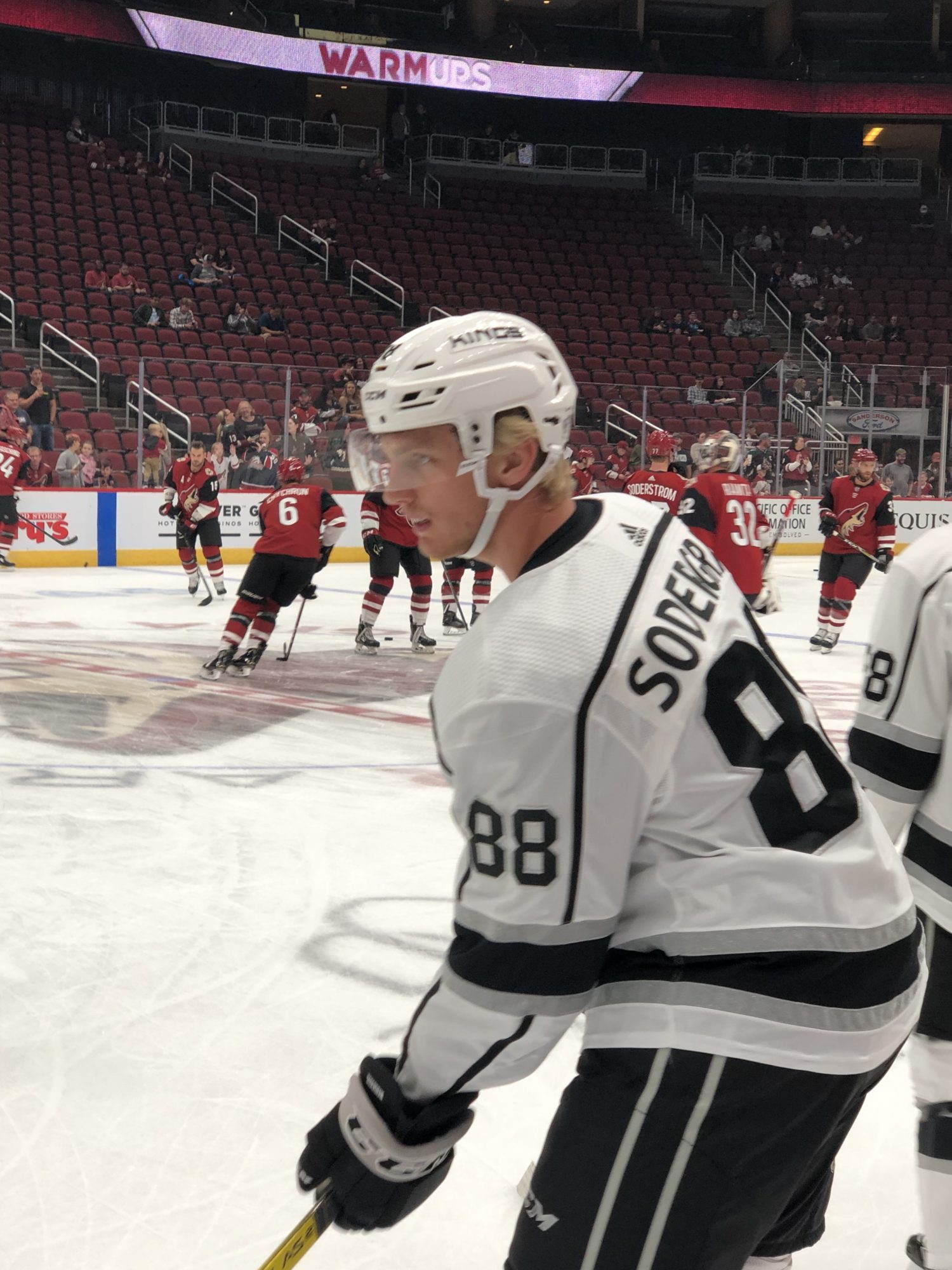