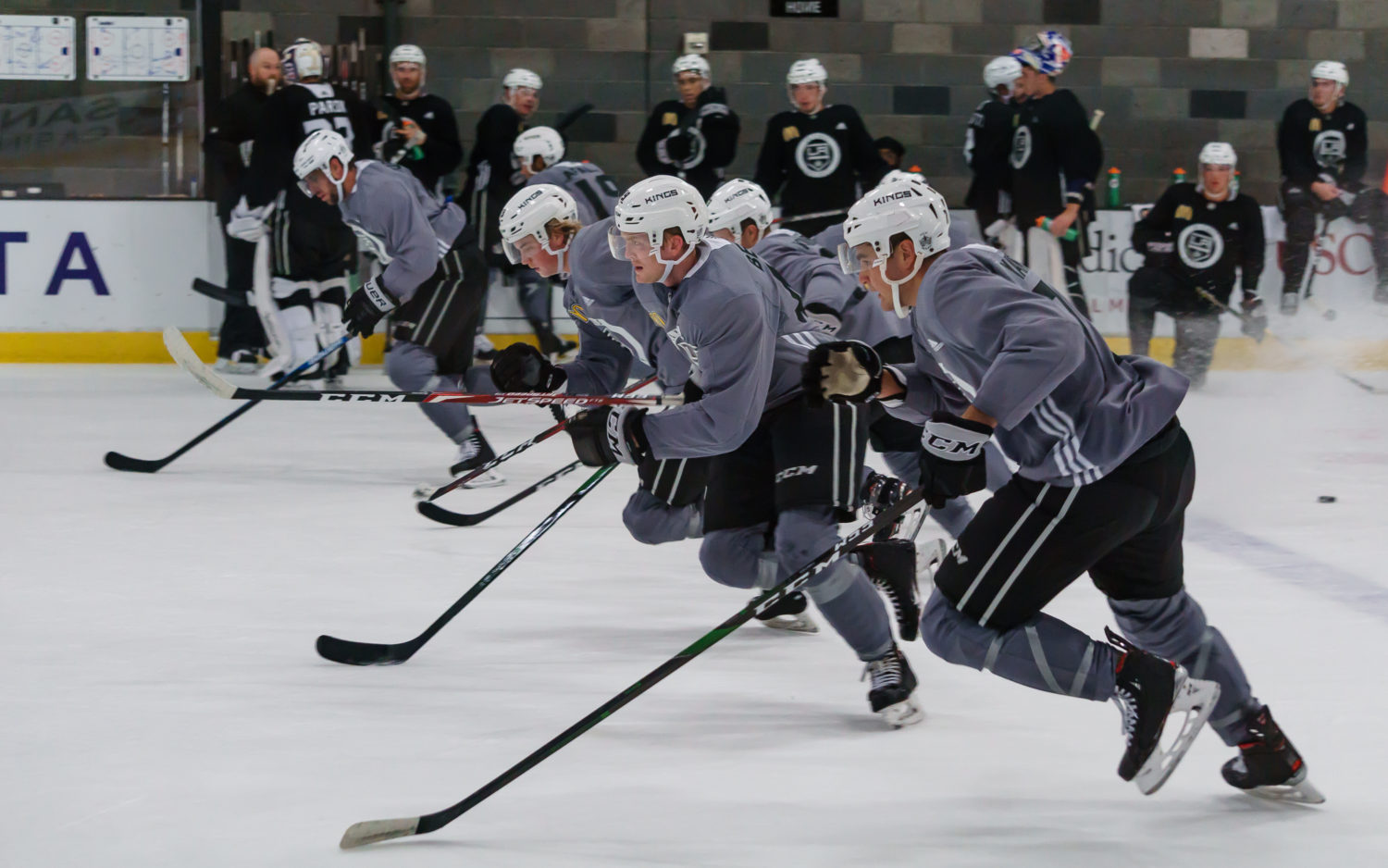 INSIDERS. A fine Tuesday evening to you from Glendale, Arizona.

Before we get to the notes and stories, several things to reinforce: Both games will be broadcast by the home team’s radio broadcasters and carried on the home team’s I Heart Radio station. So, for the Staples Center game, visit the LA Kings Audio Network for Nick Nickson and Daryl Evans’ call, and for the Gila River Arena game, which begins 30 minutes earlier at 7:00 p.m., visit the Coyotes’ streaming page for Bob Heethuis and Paul Bisonnette’s call. Zack will run the L.A. live blog, and I’ll run the Glendale live blog. Todd McLellan and Marco Sturm will be at Staples, and Trent Yawney and Mike Stothers in Glendale, where Billy Ranford will watch from upstairs. Click here for the home lineup, and here for the road lineup.

— Today’s game marks a major step in Lance Bouma’s recovery after the gritty forward suffered a knee injury that required season-ending surgery after only three games with Genève-Servette of Switzerland’s NLA last September.

Bouma, a veteran of 357 NHL games, is in camp with Los Angeles on a PTO after weighing his opportunities in the off-season. “I was going through the teams, and they were interested. It worked out well,” he said. The mindset after the extended break is to simplify. “You know your game. Just play your game and don’t worry about making a mistake. Just play free and not think too much.”

He had ample time to think amidst the nine months he spent in Geneva rehabilitating his knee injury. A year abroad sounds enticing, and if one has to rehabilitate a major injury, there are worse places to be than the banks of Lake Geneva. (What sounds better, nine months in Switzerland, or four days in a Detroit hotel, as Torrey Mitchell experienced during his 2017 visa purgatory?) But as a driven professional athlete on the shelf for an extended period, Bouma traveled to new places “to keep the mind sane.”

The biggest concern was obviously to make sure he was getting healthier. But, the prime travel opportunities afforded by the European leagues’ international breaks were a bonus, “and when I felt like I needed a break, I’d go and travel and see somewhere I hadn’t seen.” He traveled throughout Europe, with Rome standing out among his destinations.

Interestingly, a teammate during his spell in Switzerland was former Pacific Division veteran – and also a teammate of Bouma’s in Chicago – Tommy Wingels. During Bouma’s most productive NHL season as a 24-year-old, 16-goal scorer in 2014-15, then-Sharks coach Todd McLellan actually compared the two players favorably, saying that Bouma “is probably a good comparison, the two play very similar.”

“You need that type of ingredient in your lineup on a nightly basis to have success. It’s just something that’s a little bit different,” McLellan said, as reported by the San Jose Mercury News.

Tonight, Bouma – a member of the Calgary team that usurped a playoff spot from Los Angeles in 2015 – will look to continue to bring that same physicality and forechecking prowess as a power forward wearing black and white. “I’m not going to change who I am – obviously I’ll adapt a little bit, but it’s the same way. I just wanted to be the same player.”

“You just miss it over here more when you’re over there. It’s nice to be back.”

— Another player who spent time in Europe over the past few months was Kurtis MacDermid, who also traveled to Switzerland – as well as Split, Croatia and Milan, Italy, with the latter serving up a pizza that was the culinary highlight of the vacation.

It was a good time to unwind for MacDermid, who appeared for two teams in 2018-19 that finished a combined 36 points out of playoff spots. When asked to weigh his season, it was the team’s shortcomings, rather than his own improved play, that he focused on.

“Obviously for the organization as a whole, it wasn’t acceptable,” he said. “You just try to think of things that you do the best to help the team win and you just have to make sure you’re doing the right things to bring that game for the team to get the wins – stuff like that.”

MacDermid says that it usually takes a week or “to decompress and take your mind off things and refresh the brain,” and once he did so, he again took stock of his own performance. He’ll always be a hardened deterrant and energy-provider, but there were other abilities that meshed collaboratively with his punishing physicality.

“Getting a lot of reps in Ontario helped my game a lot, rounding out my game,” he said. “To get that confidence with the puck and making really good plays coming out of the zone – first pass type of thing – and maybe jumping up in the rush and creating some offensive zone time and space for other players.”

“I think it’s just providing a little bit of energy and emotion and physicality to some games that needed it. And other games don’t need it as much,” he continued. “I just have to pick my times and have a feel for the game and where it’s going. Each game is different, so you’re going to have to vary your game a bit to how the game is going. I just went out there and did my thing and tried to bring all the elements that I usually bring to the game.”

MacDermid is now 25, and while he has 194 AHL games under his belt, his 11 games with Los Angeles late in the 2018-19 season seemed to be the most pronounced. He was assertive and confident with the puck and played at a better pace than the prior season, demonstrating admirable patience and focus. MacDermid, who signed his ELC on September 12, 2012 and played his first NHL game five years later, is not waiver exempt – but that might not matter for a player vying (and likely on the inside of the bubble on the precipice of the preseason) for a depth defensive role. Team executives have always been high on his ability to receive instruction and process information. He’s very coachable.

“They signed me, and I was really grateful for that,” he said. “They had a lot of patience with me, and I just tried to work my hardest and learn as much as possible with the unbelievable development staff they have. They showed patience with me, so there are times where I have to show patience and just bide my time, just keep working at my game. You can’t be in a better spot organization-wise than this one, so I’m happy to be here.”

Around 1911, scouts for the Standard Oil Company discovered an old coastal melon patch in the South Bay. “The area they were looking for had to be adjacent to the seashore, where tankers could transport oil to all parts of the world,” Atkinson explains. Standard Oil snapped up the melon patch and named it El Segundo, meaning “the second” in Spanish. Some say that the name was inspired by a woman who enthusiastically stated, “El Segundo is second to none.” Others say the company chose this odd numerical name because it would be the home of the second oil refinery that Standard Oil constructed (the first was in Northern California). By 1912, a tent city of workers soon sprang up around the newly constructed refinery, and a community was born. El Segundo was officially incorporated in 1917.

— Back to hockey. Mario Kempe enjoyed his homecoming this morning at Gila River Arena, where he exchanged hugs with his former teammates, athletic trainers and equipment managers. Signed by Los Angeles on July 1, Kempe joins the Los Angeles organization after spending the previous two seasons in the desert, where he totaled six goals and 13 points in 70 NHL games and 23 goals and 48 points in 57 AHL games.

“It’s pretty fun, actually, to start out with a game here right away, the first preseason game. I don’t feel that weird. I’m excited,” said Kempe, who lived with Oliver Ekman-Larsson for a short period while in Arizona.

Prior to returning to North America – Kempe had spent two seasons with QMJHL-St. John’s, where he was drafted by Philadelphia in 2007, as well as eight games with the Philadelphia Phantoms in 2009 – he had appeared in 294 SHL games and another 166 in the KHL interspersed around international competition with Tre Kronor.

“Obviously being in the KHL, you get good money, so players can be comfortable there, too,” he said. “But how we grew up, how we were taught how to handle life, it’s to search for new opportunities. The NHL is the best league in the world, so I said, ‘if I get one shot to come over here, I will take it.’ So far I’ve been doing pretty well, and now it’s the next step to be a full-time NHLer and play a full season.”

He had a sense he’d make the jump back to North America when he visited Los Angeles upon the conclusion of his 2016-17 KHL season with Vityaz Podolsk. With his family also present, he attended a morning skate in El Segundo, and not long after that was in attendance at Staples Center when Adrian, eight years his junior, scored his first NHL goal in a game against the Washington Capitals.

“A lot happens in three years at that age. For me, back then, he was just like a little kid, but now he’s grown up, and I think he can do big things in this league,” he said.

You’ve probably heard some of this by now: Mikael Kempe, Mario and Adrian’s dad, is trained in martial arts and has also coached and worked in management and skill development in Sweden’s Division I and Division II. Mario praised his dad’s ability to motivate and instill a strong work ethic in his kids.

“Obviously we had some talent, but I think the biggest thing he taught us was how to work hard – and how to like to work hard – and how to like to compete when it’s getting tougher. Like I said, he’s really good at motivating people. If you talk to him before a game, you feel like you can go through a wall or something like that. That’s what he taught us the most – how to be ready for big games and tough games,” he said.

While the brotherly companionship is a welcome and therapeutic perk and played a role in his decision to sign with the Kings, it was also due to what he viewed as a good opportunity.

“Obviously, I wanted to stay over here, and I just thought it was a good place to go to. I had heard a lot of good things about it, speaking to my brother, too,” Mario said. “He said only good things about it. I wouldn’t say it was only because of that, but I just feel it was the right choice to make.” 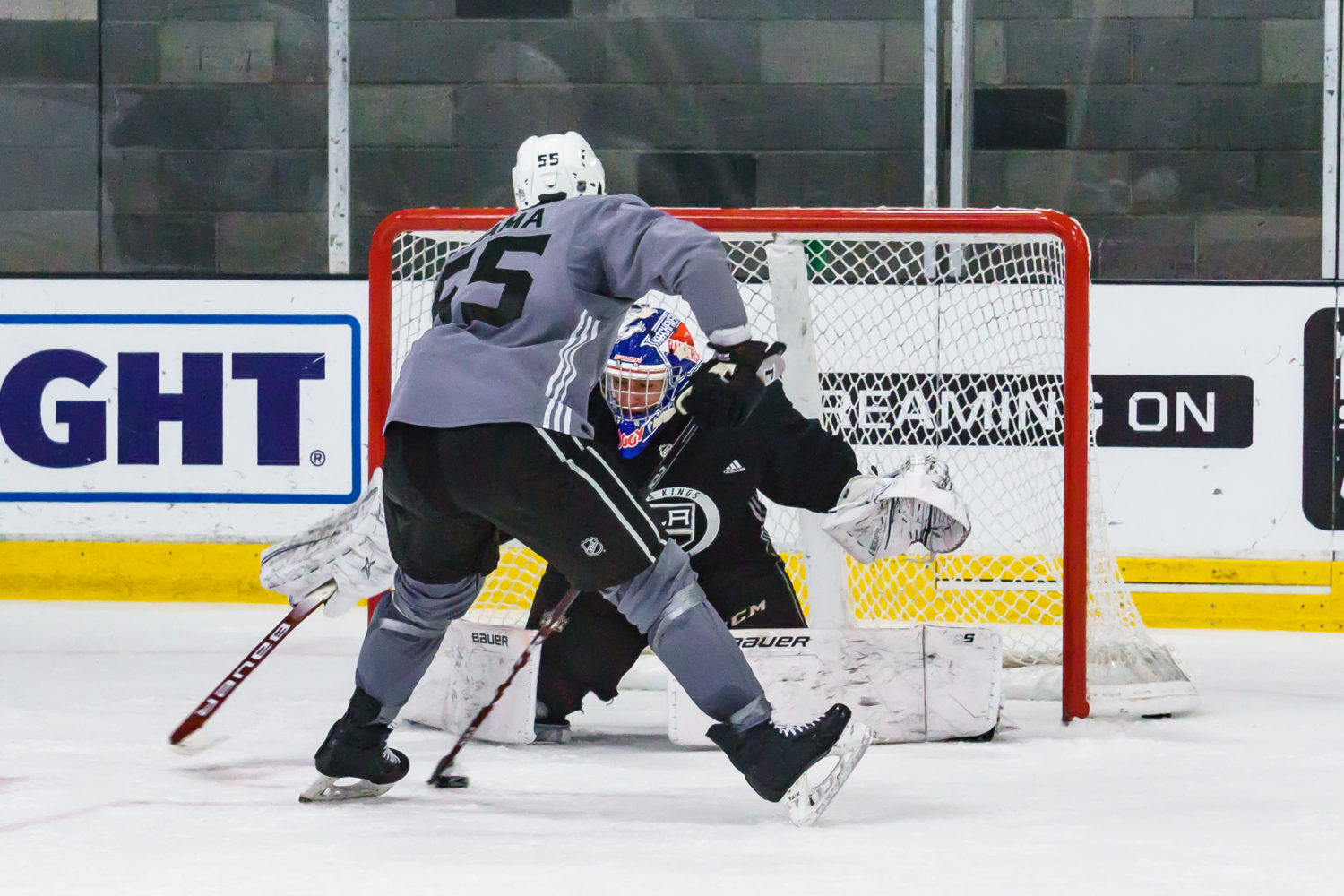 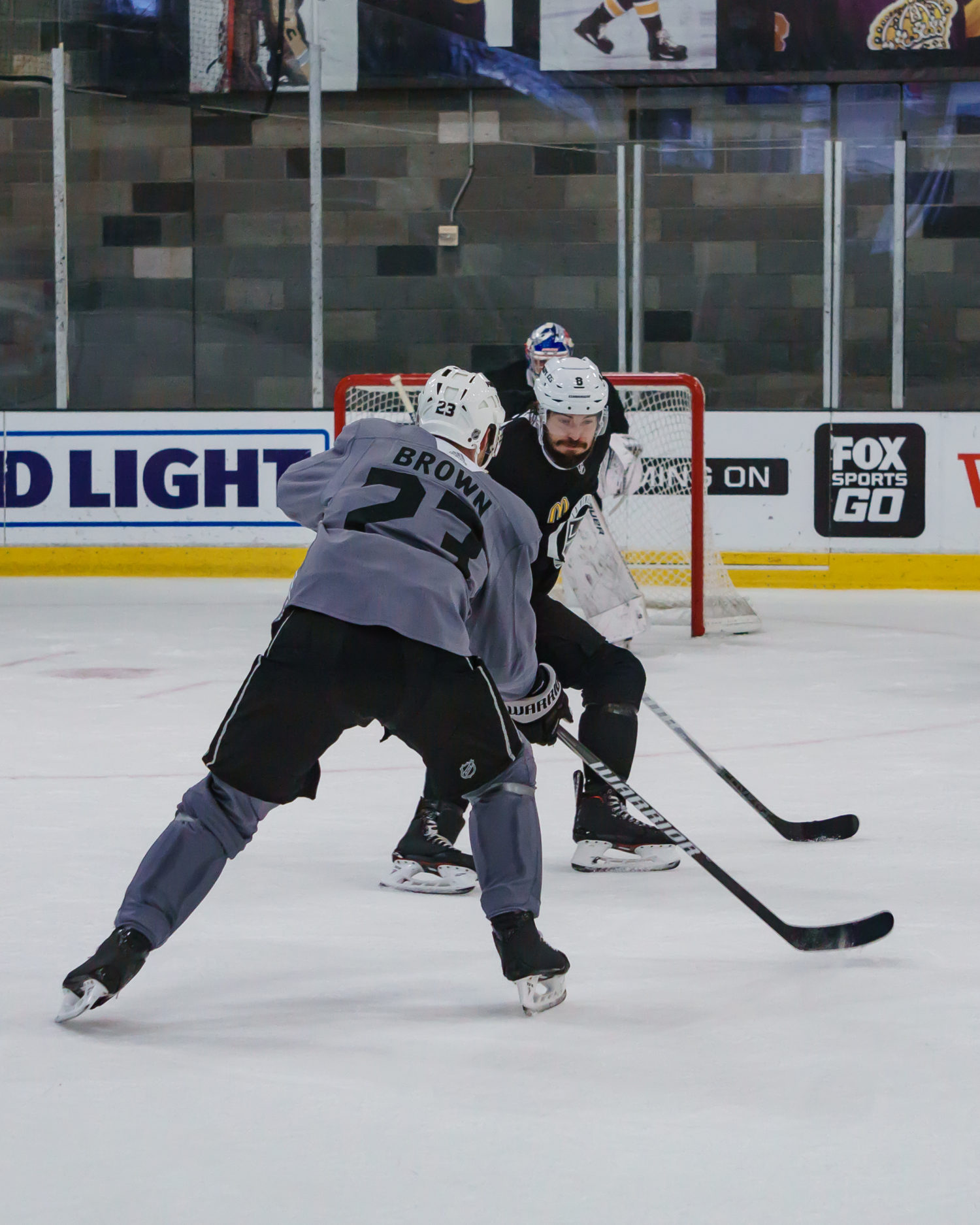 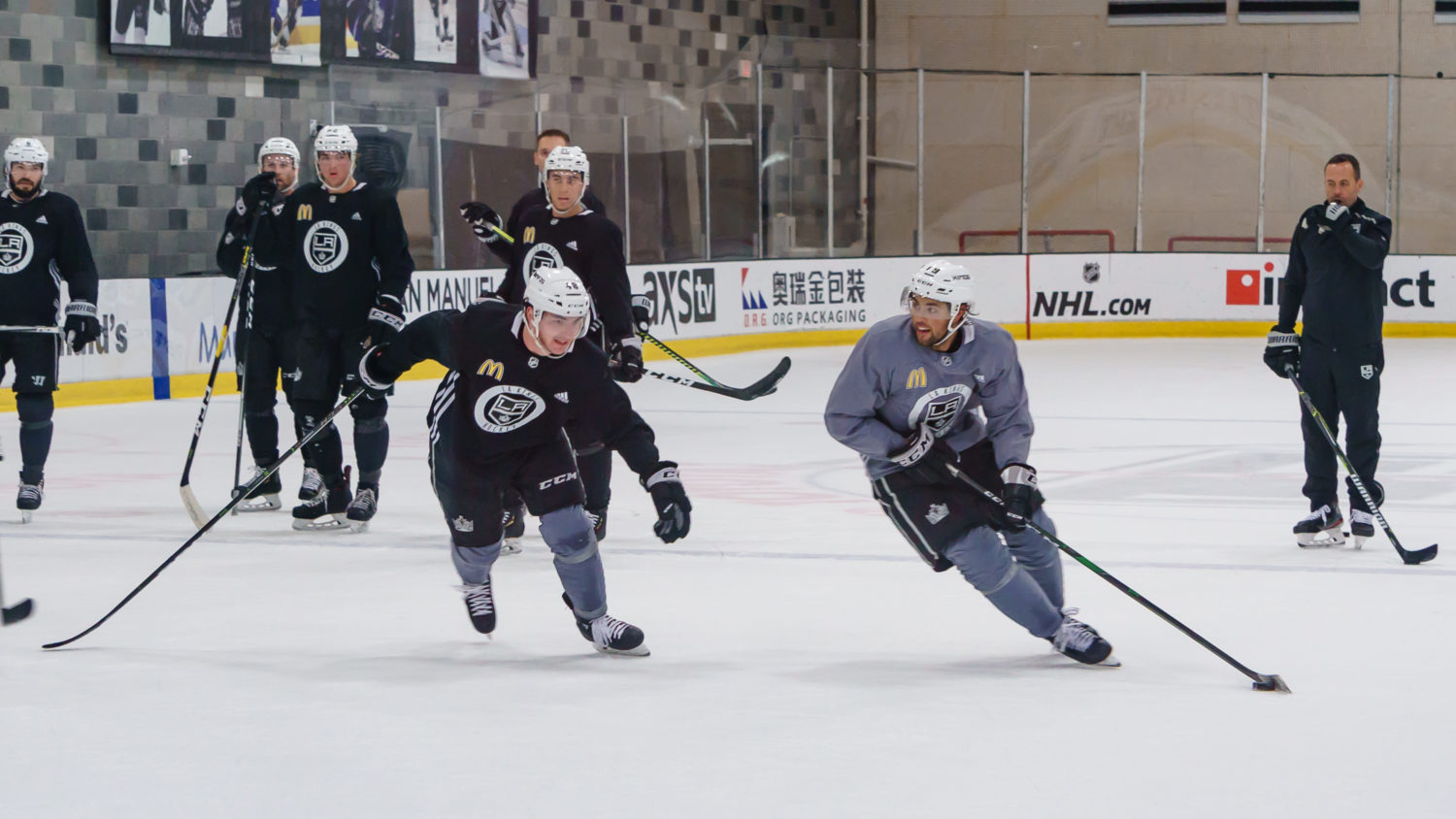 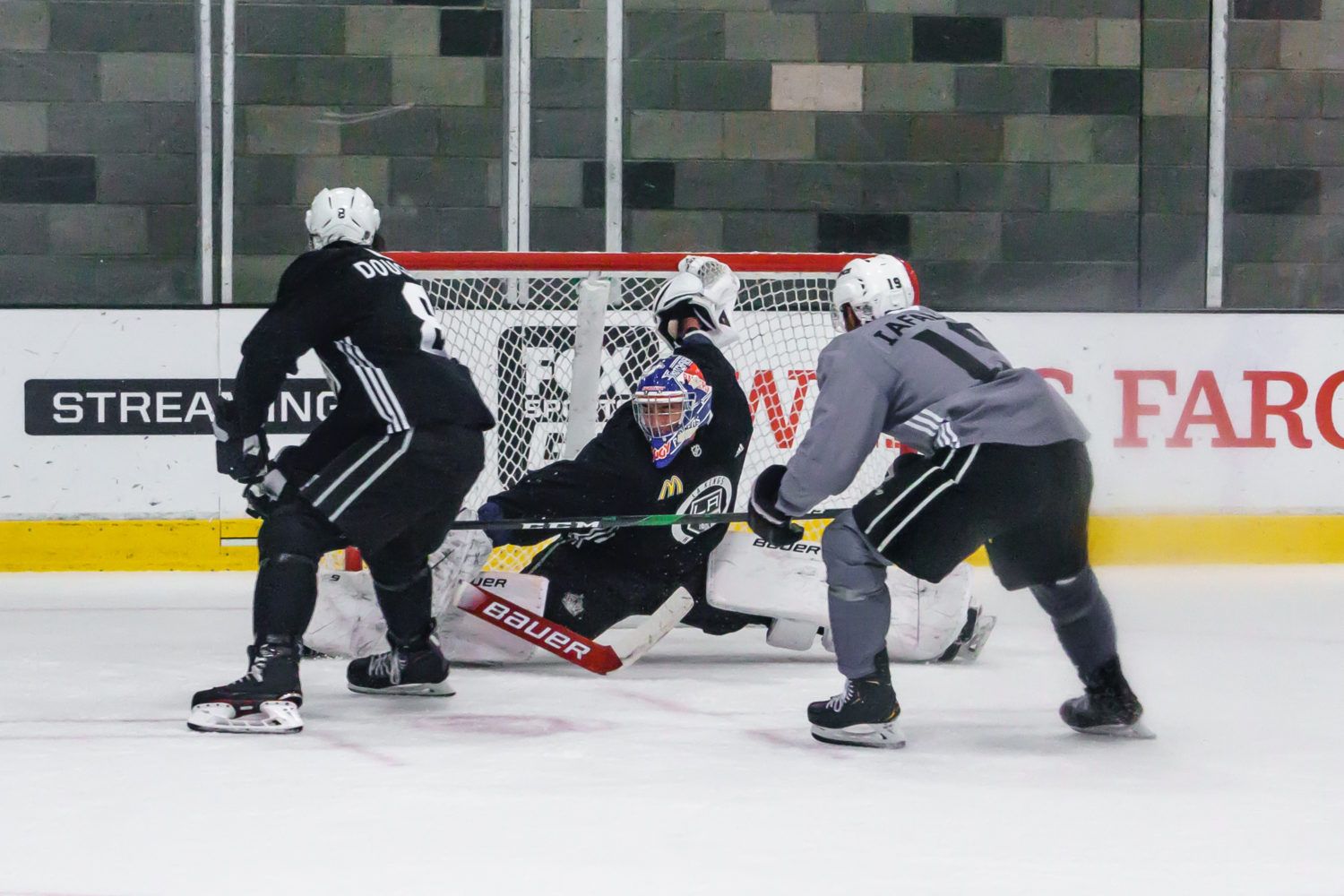 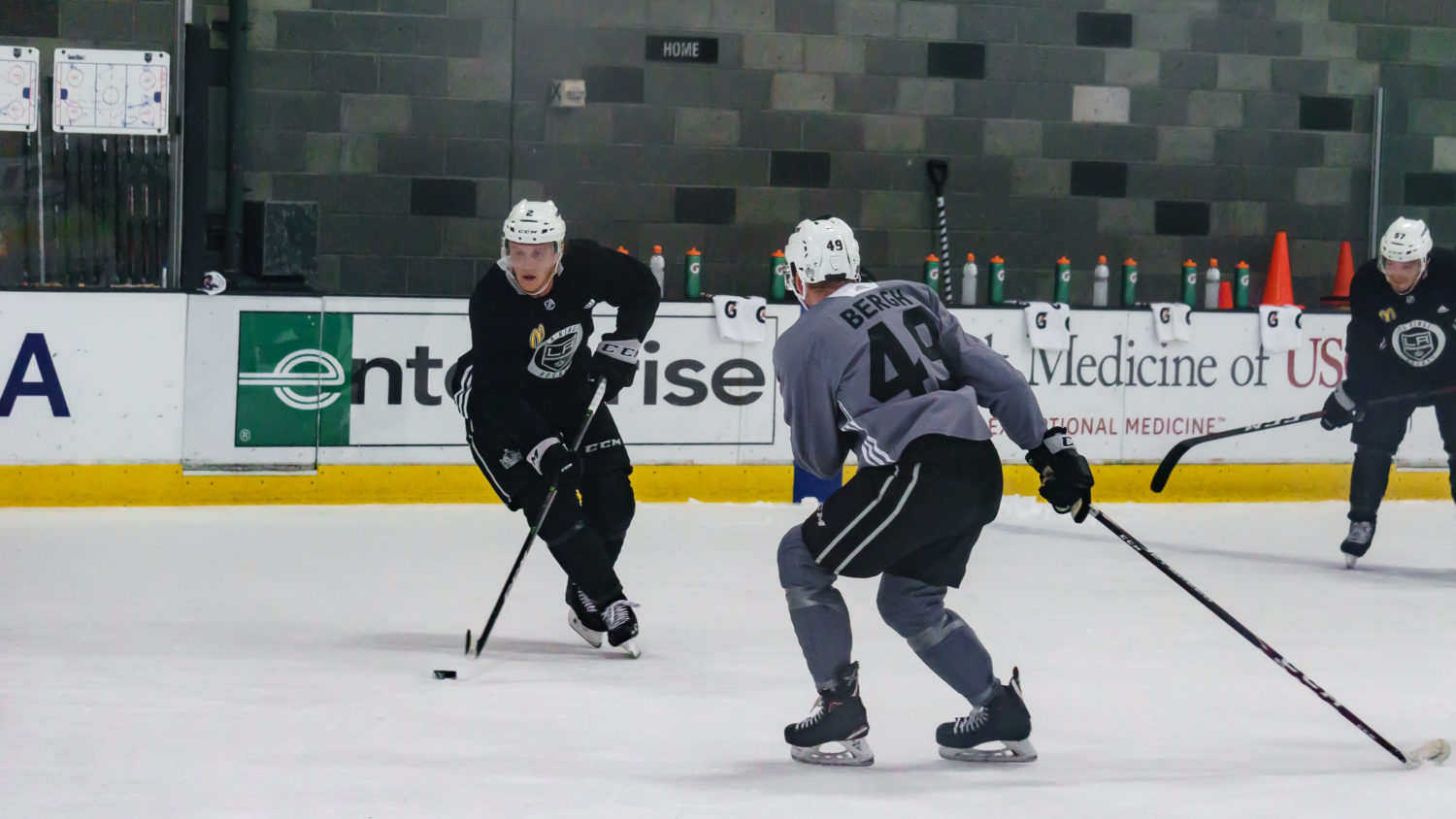