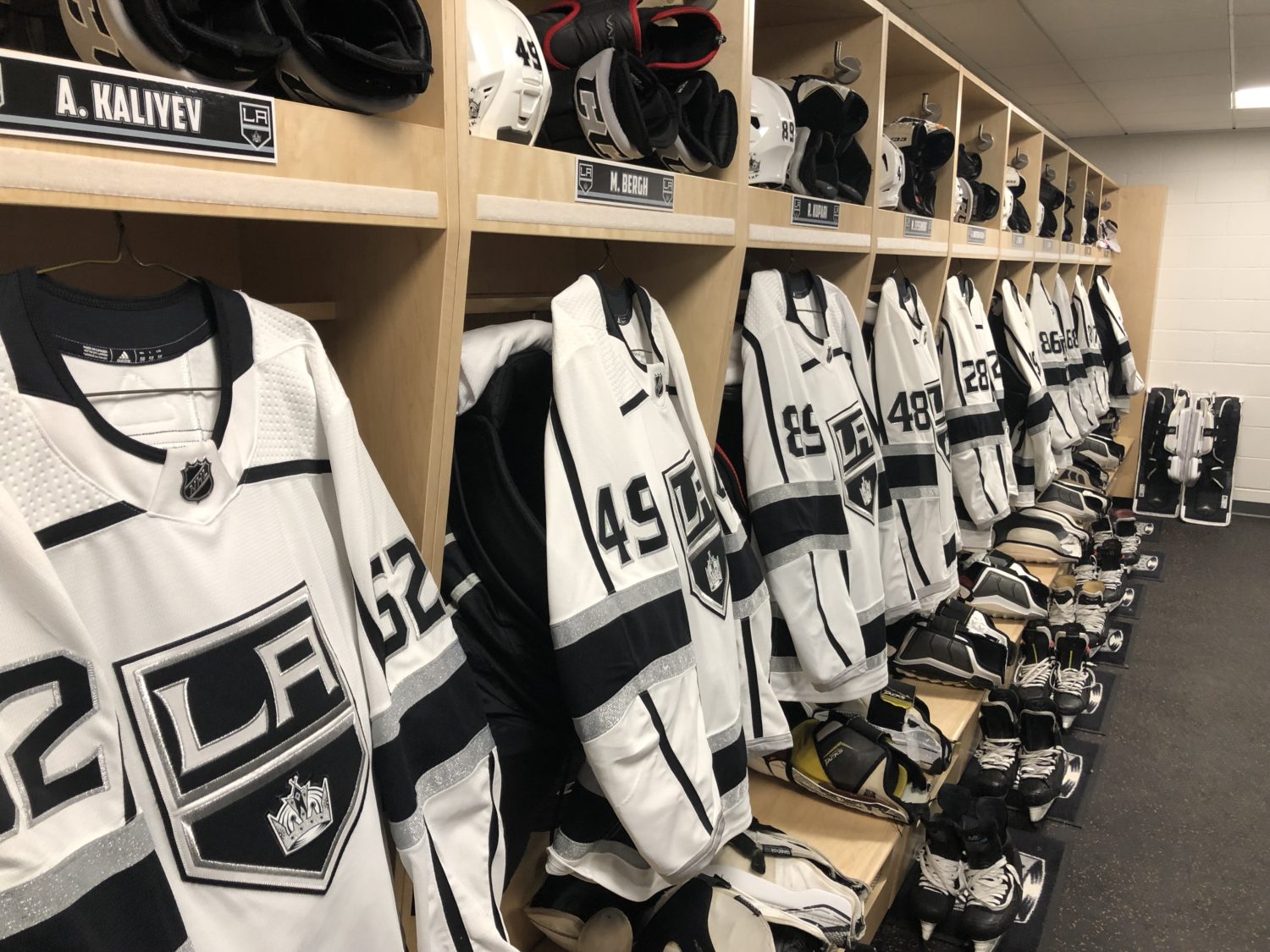 20:00 Third Period is a go, Kings lead 4-1. Will begin shorthanded for 37 seconds before Strand’s minor expires.
16:26 – Kings Goal – The Mikey Eyssimont show on that one. Eyssimont wins an icing race on Lizotte’s indirect feed, dances around defenseman Bowen Byram behind the net and tucks in his finish on the short side, past Colorado netminder Trent Miner. Highlight reel goal and it’s 5-1 LAK.
12:51 – Eyssimont to the box midway through the third period. Colorado will get its sixth opportunity of the afternoon, entering this at 0-5.
10:23 – LAK gets the kill and now heads to a power play of their own. Mutter sits for elbowing.
8:24 – Kings Goal – Power-play tally for LAK, Yantsis gets the tap-in at the back post after a pinpoint feed from Blake Lizotte finds him for the goal. Another great shift from that line, this time on the man advantage.
5:15 – Kings get another PP, this time it’s Regis, who sits for tripping. On the delayed penalty, Kings put the puck in the net, with Yantsis draped all over the Colorado net, but it’s waved off and Kings just the the power play.
3:34 – Kings score, but its waived off off for goaltender interference on Rymsha, who is called for “incidental goaltender contact.” Mason Bergh had the rebound tally after a hard point shot from Strand was rebounded off the pillows of Miner.
0:00 – Kings win 6-1, even their record at 1-1 for the tournament.

20:00 – Back in action – Kings lead 2-1 as we begin the middle 20.
18:18 – Early penalty on the Kings as Akil Thomas sits for slashing. Avalanche were credited with 4 SOG on their first power play, per Daryl Evans.
17:03 – Strand now goes to the box and Colorado will have a 5-on-3. Advantage for just under a minute. Strand’s penalty is also slashing, took a whack at Byram in passing.
15:55 – Kings kill off the Thomas minor and get reprieve as Henry hooks Mikey Anderson as the LAK blueliner attempted to ice the puck. 4-on-4 hockey.
14:02 – Kings Goal – Power-play tally, Constantinou gets the marker. The right-shot defensemen made a nice, shifty move towards the slot and fired his shot through the five hole of Miner. Mikey Anderson with the assist, LA leads 3-1.
10:00 – Kings look solid through the first half of the game. Eyssimont – Lizotte – Yantsis line has been most impressive IMO. Former two nearly connected on a nice cycle play that almost resulted in a nice chance in the slot.
6:30 – Kupari sits for holding, Colorado back to the PP. Kupari was the backchecker in an odd-man situation off the rush, took the holding call as the Avalanche drove the net.
2:30 – Kings Goal – Anderson-Dolan taps home a rebound with Miner out of the play. Good shift all around with puck control throughout, leading to the tally. Good work from Mikey Anderson to get a pair of shots through on that shift.
1:24 – Strand takes his third penalty of the evening, this a hooking call inside two minutes to play. Colorado back to the man advantage late in the middle stanza.
0:00 – Kings 4, Avalanche 1 – Another strong 20 from LA, which takes a three-goal lead into the intermission.

20:00 – Underway for Game 2!
16:53 – Kings Goal – Dudas collects the puck at the top of the right-hand circle and fires a nice shot past a screened Trent Miner. 1-0 LAK early in this one.
14:00 – Kings will get the first PP of the game, six minutes in. Davis sits for boarding and LA will look to net its first PPG of the event.
12:24 – Kings nearly get that goal, but Thomas is denied as he tries to out-wait Miner, and then Sodergran’d backhanded effort on the rebound from close range was blocked down in front. Puck trickled through the crease on Thomas’ bid, but no dice.
10:44 – Strand and Wegwerth have been jawing a bit in the first period….gets a little more aggressive by the benches and both are sent to the penalty box with matching unsportsmanlike conduct minors. Will play 4-on-4.
8:34 – Avalanche Goal – Alex Beaucage drives to the front of the net, between Durzi and Sodergran, and slides his shot under Ingham’s left pad to knot the game at one.
7:01 – Kings Goal – Nice work between Eyssimont and Lizotte, leads to Lizotte finding Constantinou at the point, where the right-shot defenseman fires through traffic to put LAK back on top. Looks like it deflected, but stands as Constantinou’s goal for now. – UPDATE – Goal credited to Eyssimont, on the deflection.
4:44 – Ingham with a nice right-pad save on Henry. Impressive from Shane Bowers to control the puck all the way around the arc, leading to the back door feed.
2:37 – Constantinou to the box, Colorado to its first power play of the game, late in the first period.
0:00 – Kings 2, Avalanche at the intermission. Goals from Dudas and Eyssimont, 12 saves on 13 shots for Ingham.

– Billy Constantinou and Jonathan Yantsis enter the lineup in place of Jordan Spence and Brad Morrison. Jacob Ingham will make his tournament debut in net, with Matthew Villalta backing up. Constantinou and Yantsis are both undrafted free agents, looking to earn a contract.
– Austin Strand will captain the team for the second straight game, with Mikey Eyssimont wearing an “A” for the second game in a row. With Morrison scratched, forward Drake Rymsha will wear the second “A” this afternoon. 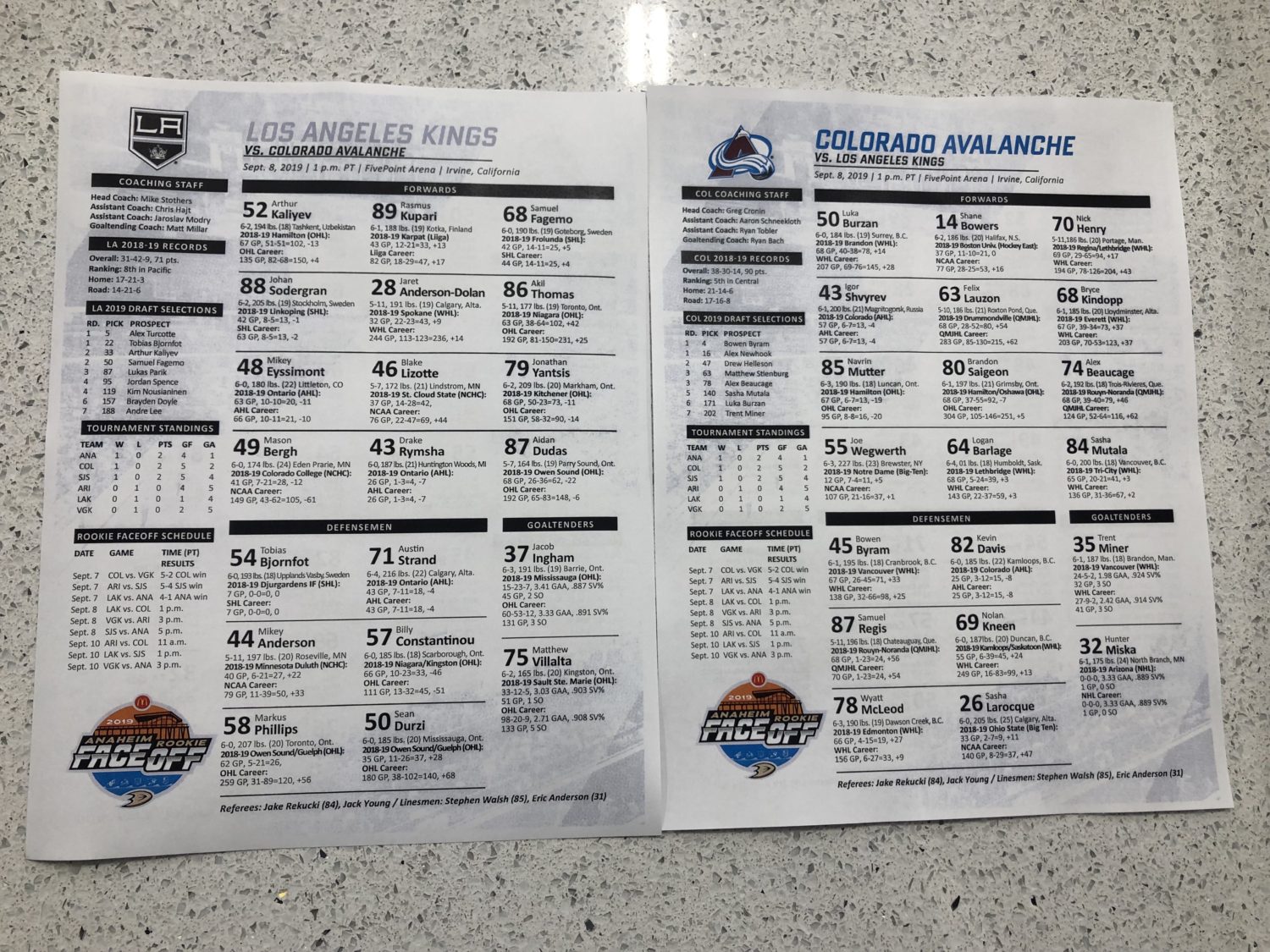