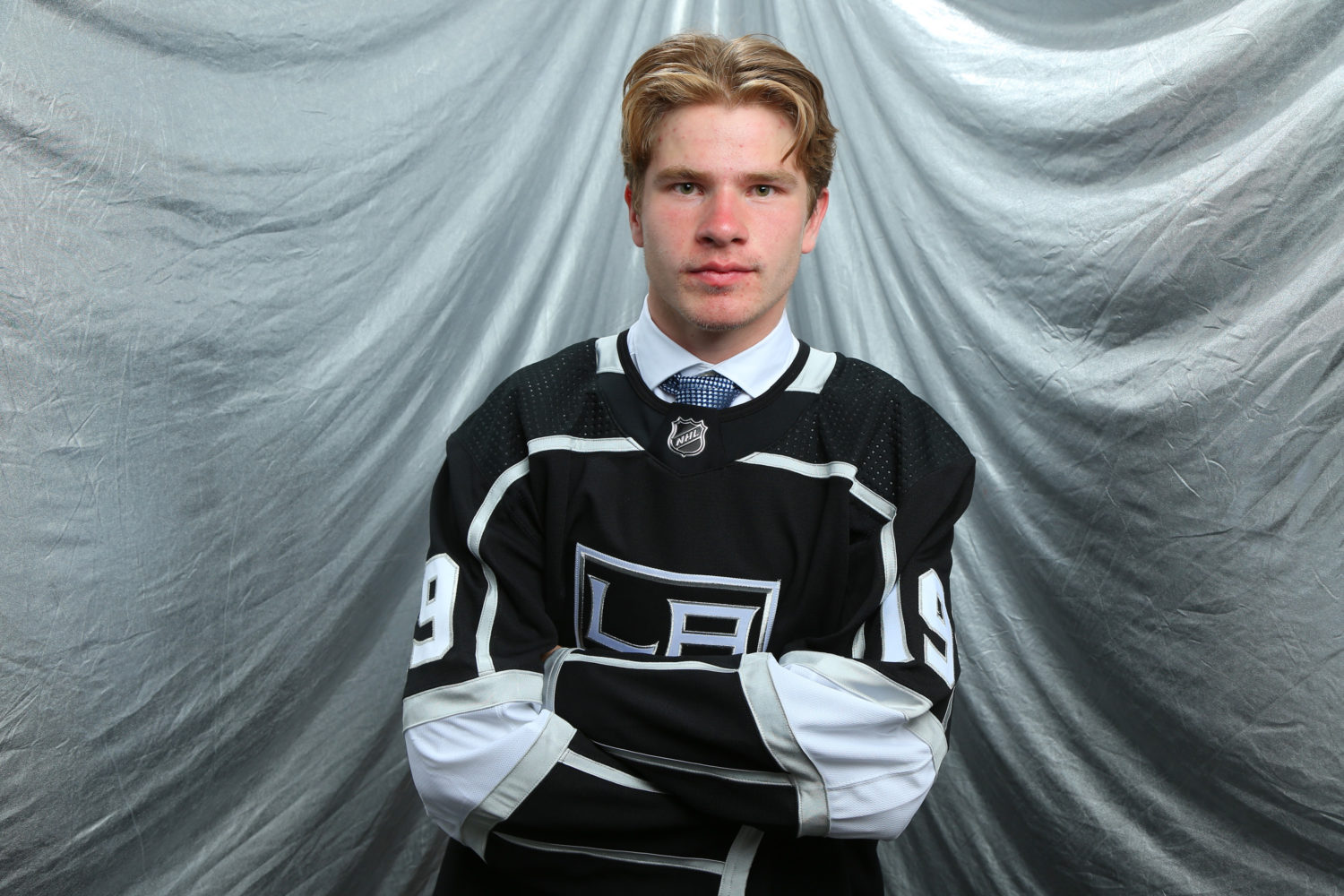 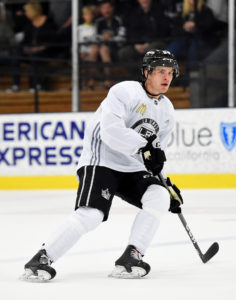 The Kings announced Sunday that they’ve signed defenseman Tobias Bjornfot to a three-year, entry-level contract. Bjornfot is the second member of their 2019 draft class to sign with the team after Samuel Fagemo signed earlier this week.

Bjornfot was the Kings’ second selection (22nd overall) in the first round of the 2019 NHL Entry Draft and is lauded as an excellent skater whose two-way game favors his play on the defensive side of the ice. He got into seven games with Djurgårdens IF’s senior team in 2018-19 before captaining Sweden to its first even gold medal at the IIHF U-18 Championship as tournament hosts.

He’ll be back on North American soil later this month when he makes a case to be included in Sweden’s world juniors team at the World Junior Summer Showcase in Plymouth, Michigan. He’ll join Fagemo, who appeared as an underage forward for Tre Kronor at last year’s tournament.

Far from a flashy player, Bjornfot is one of the more consistent, game-in, game-out players who has taken on a highly visible role for the national junior teams as a premier talent who grew up just outside of Stockholm.

“Well, like I told Tobias, he bored me out,” LA Kings Head European Scout Christian Ruuttu said after the NHL Draft. “And it’s a credit to him – he’s a D-man who’s a great skater, a strong skater, doesn’t make a lot of mistakes. He hardly ever makes a mistake and he’s a leader. Also, he doesn’t look flashy or anything like that, but he just makes things happen and makes everybody around him better.”

Bjornfot, who turned 18 in April, is under contract to Djurgårdens in 2019-20 and is expected to play for the Stockholm-based club. Still, his future didn’t seem as set in stone as Fagemo, who hockey operations confirmed would return to Frolunda in 2019-20 before making the leap to North America the following year. Asked whether there was a similar plan for Bjornfot, hockey operations said that his future is “still undecided” and that they retained the ability to control that now that he’s under contract.

“Wanted him here for camp and to control the situation. One of the reasons we signed him,” General Manager Rob Blake shared via email.

He is the 11th player of 23 drafted by Blake to sign an entry-level contract. His contract is eligible to slide for two years, which means that unless he plays in 10 NHL games in either 2019-20 or 2020-21, he’ll become a restricted free agent in the distant 2024 off-season.

More quotes from the NHL Draft:

Rob Blake, on selecting Tobias Bjornfot 22nd overall:
Christian Ruuttu does a really good job with Mark Yannetti over in Europe. As far as the D part was concerned, we were looking for a D. We didn’t take one in last year’s draft, so we knew we had to have something in the high-end on that aspect. Good skating D, but again, a captain on the U-18 team. Has that leadership ability, that character and that compete.

Mark Yannetti, on the decision to choose Bjornfot, a defenseman, 22nd overall:
So, what happens is you look at 22, and we had a dead heat at 22. So, you have a D and a forward that happen to be our dead heat. And then you look at the draft, and if you look at our list – not any independent list – between 22 and 32, we would’ve had two defensemen left on our list, and then between 22 and 33, we had two defensemen but we had four forwards. I know it doesn’t make sense – that’s why it’s the short version. So, the odds of there being a defenseman there at 33 were less than half of what it was with there being a forward. That’s just your numbers. Now, you look at all the independent lists, and we identified two of those forwards we thought would be the ones to fall, so now it checks another box in terms of what may be there. So, what we did is we took a slight calculation of risking maybe losing the forward because if we lose those guys, the difference in depth between the four guys that we lose and the ones that would be available at 33 was much less than what you’d lose between a defenseman. So, if the two defensemen are on a scale of 1-100, the difference is 70. If the forwards go, the next forward, it’s like 20. So we kind of took a calculated risk saying that we wouldn’t get defensive value at 33, but we could still get forward value if our list went wrong. … I can’t tell you how stressful it was watching 27, 28, 29, and then once it got to 31, then we knew we’d get one of the two, and we’re like, ‘oh yeah, we’re geniuses.’ And I’m sitting there the whole time, like, ‘don’t [go poorly].’ I’m telling Rob this is a probability, and if a probability doesn’t happen, then I’d look like an idiot.

The 18-year-old Bjornfot (born April 6, 2001) was recently selected by the Kings in the first-round (22nd overall) of the 2019 NHL Draft. The Upplands Vasby, Sweden native appeared in 39 games last season with Djurgardens J20 of the SuperElit league in Sweden. He posted 22 points (11-11=22), a plus-15 rating and 14 penalty minutes while also being named the assistant captain. He made his debut in Sweden’s top league (SHL) this season, appearing in seven regular-season games with Djurgardens, going scoreless with two penalty minutes.

Last season marked his second full season in the SuperElit league, where he has played in 81 games, posting 44 points (17-27=44), a plus-11 rating and 22 penalty minutes with Djurgardens J20.

Internationally he has represented Team Sweden in consecutive U18 World Junior Championships. In 2018, he helped Sweden win the bronze medal, appearing in seven games with no points, a plus-3 rating and two penalty minutes. This season, he was named the captain of Team Sweden, and helped them win the their first U18 gold medal, posting one point (0-1=1) and six penalty minutes. 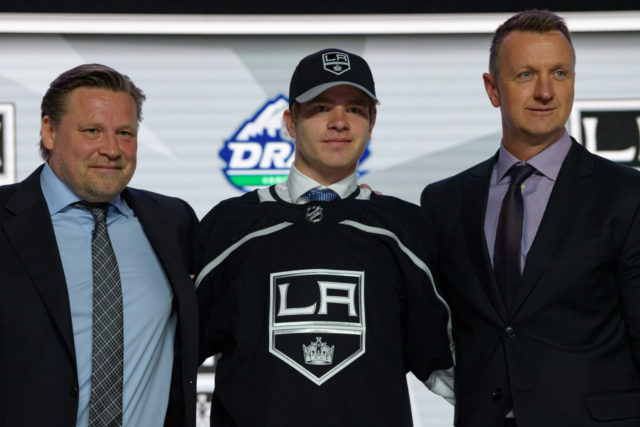 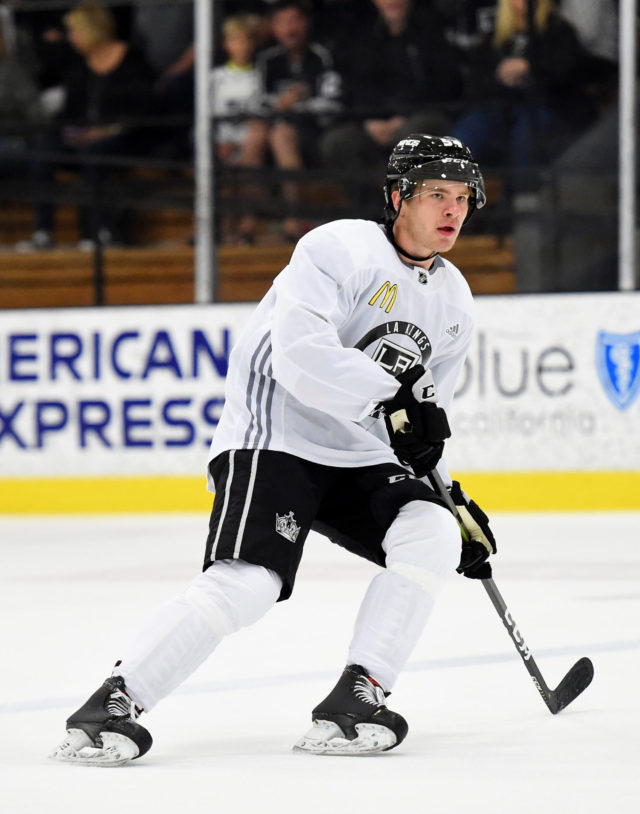