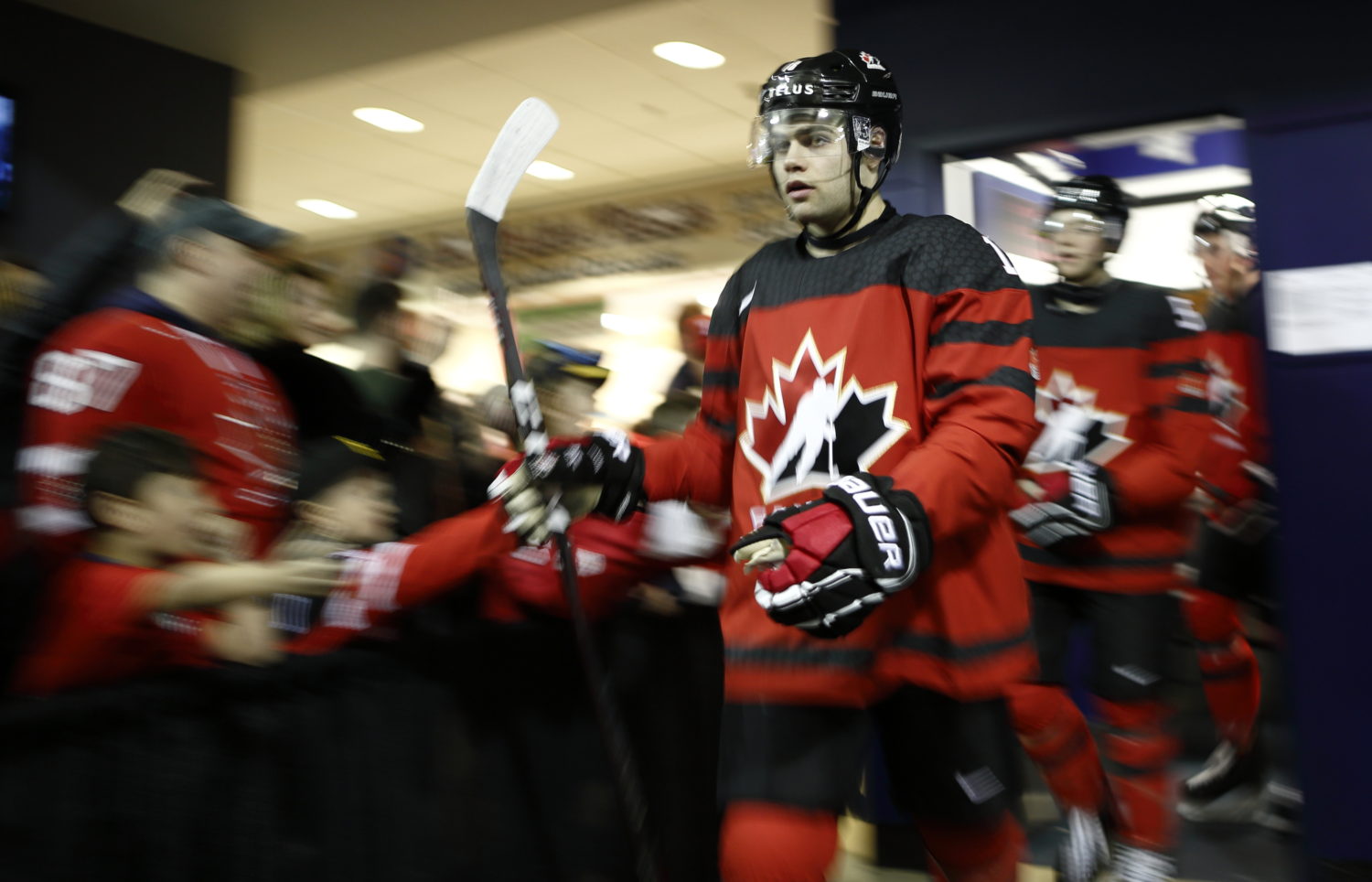 VERY IMPORTANT NEWS. I share this because it is tangentially related to development camp and Mikey Anderson’s shift from 79 to 44, which I was told was due to a “size change” in his jersey.

66 is out of respect to Mario Lemieux and the type of slight if unnecessary spotlight it might put on a prospect. “Hey, get a load of Mario over there!” I imagine some might say, if they were to have the imagination of a 38-year-old sports reporter. This was a minor controversy that stirred up some hot takes mostly north of the border and in perhaps some Western PA communities when Joshua Ho Sang made his NHL debut wearing 66, a number he previously wore in junior hockey out of deference to one of the game’s greats.

It seems all teams are hesitant to assign 69, a number only worn by two players in NHL history (and approximately another 5,000 in beer leagues). 69 is a silly number that distracts and invites jokes, which doesn’t fly across a league that aligns towards the conservative and staid. Also, to research this, I scanned a good percentage of development camp rosters across the league for the number 69 before turning my attention to something… more productive. No 69s were found on any roster.

72 is worn by Bailey and isn’t available to players. Shane Churla is the only King to have ever worn 72.

MORE TRIVIALITY. Kalakukko is the delicacy of Kuopio, a mid-sized city in central Finland set among an abundance of lakes in Northern Savonia, a region associated with boating and healthy outdoor living. This is a beautiful time of the year to be up in Kuopio.

Anyway, kalakukko. Essentially, it’s a loaf of rye bread baked around a fish, which may or may not be wrapped in bacon.

“I eat that every month – not every day, but every month,” said Kim Nousiainen, the second of two defensemen Los Angeles chose in the second round at last month’s NHL Draft. As a 5-foot-9, mobile and puck-moving left-shot defenseman from Kuopio, Nousiainen is astutely familiar with another famous homegrown entity: Kimmo Timonen.

Much as many younger Swedes – and players of many other nationalities – say Peter Forsberg’s name with awed reverence, the same is also said of Timonen by those who grew up in Kuopio. The Finnish legend’s 1,108-game career reached its pinnacle and storybook conclusion when a 40-year-old Timonen lifted the Stanley Cup with Chicago in 2015, and Nousiainen was aware that the remarkably consistent and durable defenseman had originally been drafted by the Kings. 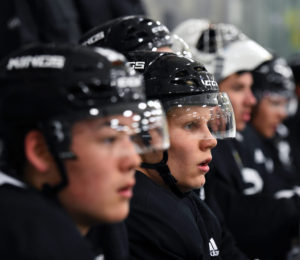 “I watched lots of Kimmo’s play when I was younger, and I know he’s hanging out a lot at the rink in Kuopio today,” he said. “He’s a very good guy, and he’s helped me a lot in my career.”

Another figure who has had an impact on Nousiainen’s career is Head European Scout Christian Ruuttu, whose son, Alexander, is a teammate at KalPa. Ruuttu shared that team figures “know him pretty much inside-out” from having observed him at Eisbären camps in Berlin, where Nousiainen had gotten onto the ice with Mike O’Connell, Sean O’Donnell and Glen Murray – there to observe and assist – even before he was drafted.

“We tested him, we watched him play, and we all fell in love with him,” Ruuttu said after the draft.

Nousiainen acknowledged the raised pace on the smaller ice surface in El Segundo but should be among the young Europeans equipped to handle the change. There’s no uniform rink size in the Liiga, home to the smallest ice surfaces in European pro hockey. Whereas an NHL rink is 61 by 26 meters, KalPa is one of six teams with a rink that measures 60 by 28 meters; Lahti Pelicans have the smallest rink at 58-by-28, while Rasmus Kupari’s Oulun Kärpät plays on a traditional Olympic sheet that measures 60-by-30. Kupari, though, capably handled the raised pace at world juniors, where he celebrated a gold medal on the 61-by-26-meter Rogers Arena ice and totaled one goal and five points in seven games as ann 18-year-old for Finland. “I developed there a lot – it was like the play here, a small rink,” Kupari said.

Nousiainen, who turns 19 in November, will return to Kuopio with 14 games of professional experience – six with KalPa and eight on loan with IPK in the second-division Mestis. The pace sustained by the caliber of player on a smaller ice surface resonated with him. “I have to be faster if I want to play in the NHL, because there are faster guys and the rink is smaller,” he said. That’s the biggest thing I learned.”

Alex Turcotte, on what resonated with him at development camp:

ASSORTED MINUTIAE. Arthur Kaliyev, who emigrated to Staten Island as a baby, had never heard of Wu Tang Clan. His preferred choice of music? “Dance, pop or top hits,” he said. Kaliyev, who hasn’t been back to Uzbekistan since moving to the United States as a baby, got into hockey when he joined his father and his father’s friend on the ice in New York. His relationship with Alex Turcotte predates the draft. “We’ve known each other for a long time. We played against each other in minor hockey, and I played with him at the prospect game together. I’ve known him for a long time.” Turcotte was a fan of using the 33rd pick to nab Kaliyev. “I was around, I was in the press box, and I was just really happy. A guy like him, he was slated to be going in the first round and lucky enough for us, he dropped to the second, and it was definitely a steal, for sure. There are going to be some teams that regret not taking him.” … Turcotte, who grew up a Blackhawks fan, lived in both the Chicago and Detroit suburbs as a child and roots for the Lions and Tigers in football and baseball. His ears perked up that such allegiance would put him on good terms with Alec Martinez. “Really? That’s a good ice breaker, then,” he said, smiling. Both Turcotte and Kaliyev were named to the United States’ 2019 World Junior Summer Showcase roster. … Tobias Björnfot, who grew up outside of Stockholm, now lives in a neighborhood near the Ericsson Globe and just over a stone’s throw from Södermalm, the fashionable island/neighborhood just south of the Swedish capital’s core. His parents attended development camp, as did Samuel Fagemo’s parents, and while this was the family’s first time in California, the Björnfots were on an afternoon direct flight back to Stockholm the day camp ended. After being drafted 22nd overall, he’ll play his first full SHL season adjacent to the Globe at Hovet – site of SHL history captured by The Royal Half – with Djurgardens this upcoming season. “Some NHL players texted me and wished me luck and some Swedish players from the LA Kings texted me and wished me luck,” he said. “I met Rob Blake, and all the staff members with the LA Kings – it was an honor for me. I’ll bring it back home and have a great season.”

Markus Phillips, on where his goal is to play in 2019-20:
Obviously I just want to get my feet wet in pro hockey. It’s a different game than junior playing against bigger, older players, so I just try and learn the ropes and learn how to defend against these bigger, stronger players.

Phillips, on his evolution towards becoming a poised, defensively-aligned defenseman:
I think it was just keeping it in the back of my head at all times – just play quiet and just make the simple plays, and I don’t have to join the rush all the time, but I can contribute as the fourth man up the ice. I just feel like you’ve got to keep that in the back of your head – and obviously O’C and O’D were big on that and they were harping on me all the time to make sure I’m doing those little things – it’ll make the difference in the long run.

Phillips, on how he transferred his skating and offensive bent towards the defensive game:
I think it was just taking pride in learning the defensive side. Maybe I didn’t get as many points or whatever in my last two years of junior, but the focus wasn’t on that. It was more learning to defend and learning to play off the rush and being that defensive-first defenseman.

Phillips, on whether his comparison to playing a similar style to Drew Doughty is more apt now:
I think when I was drafted, I was looking at Drew Doughty as obviously my player comparable, but now if I’m just looking at the kings, I’m more of an Alec Martinez, or in the NHL, a Marc-Edouard Vlasic. Me and Durz joke about him being the Brent Burns and me being the Vlasic. I just feel like I can use my skating to my advantage, but I don’t have to skate all the time. Use it as a weapon, but slow down when I have to. 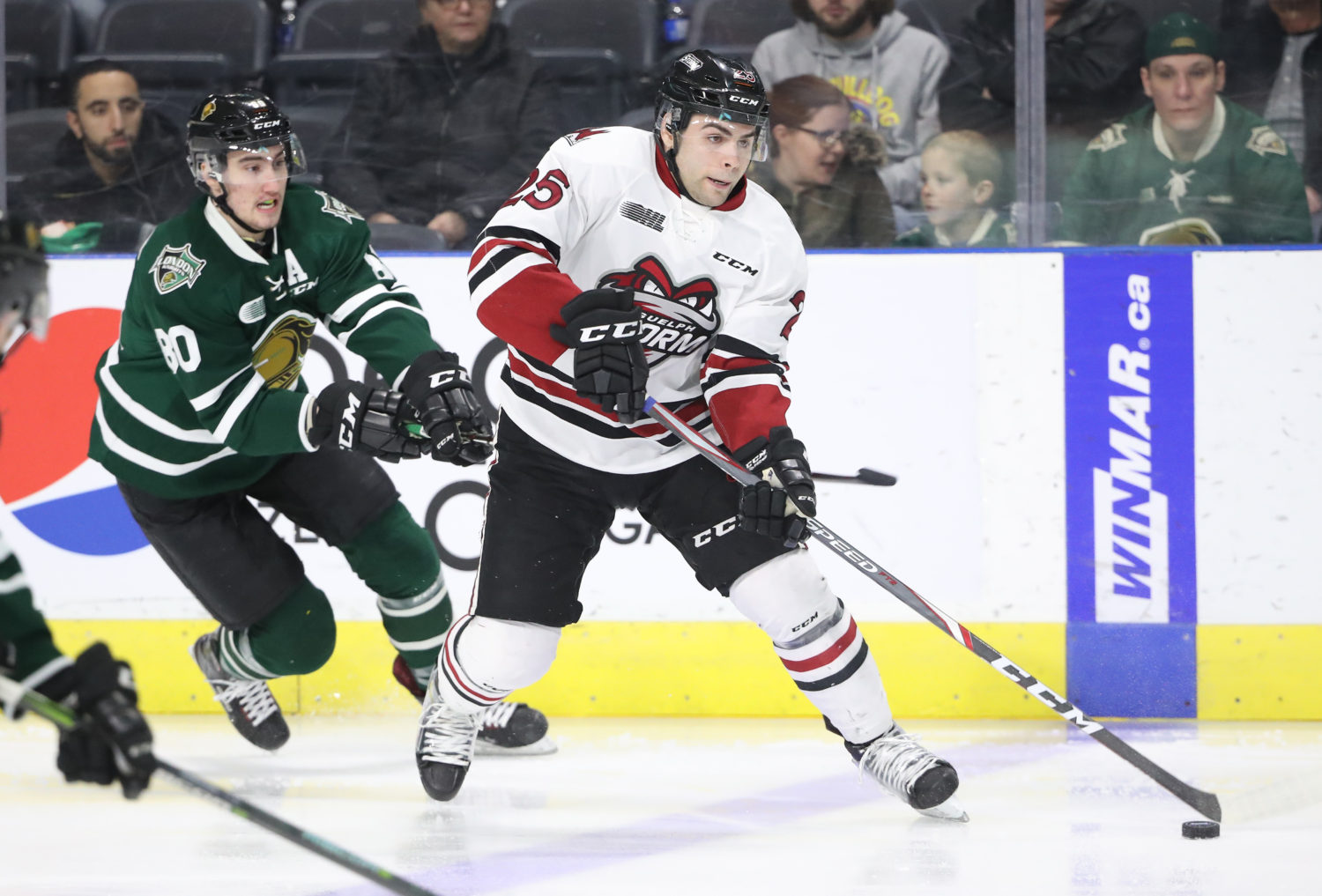