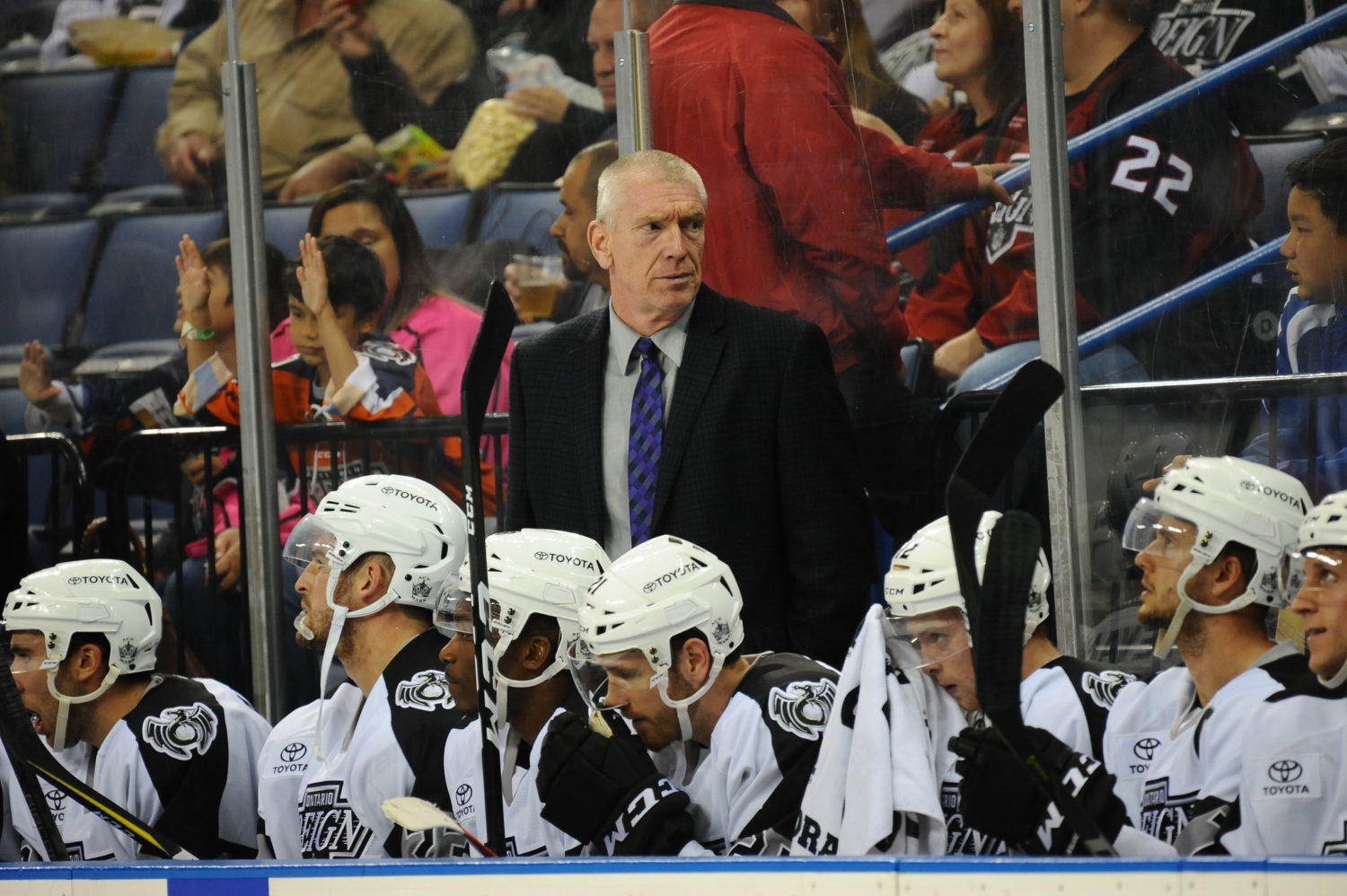 It’s always good to be back at the rink after some time away and that sentiment goes twice for Mike Stothers.

I chatted with the Reign’s Head Coach after Day 2 of Kings Development camp earlier today at Toyota Sports Center in El Segundo. Stothers and the Reign staff are not on the ice with the prospects this week, but rather engaged more in meetings behind the scenes in preparation for the start of training camp in September and the regular season to follow in October.

Regardless, the man known best as Stutts gives his thoughts on working with a new Kings Head Coach, what he hopes players take away from development camp and getting back to the rink after missing out on the postseason.

On being back in the rink after a couple of months away
It’s awesome, it’s awesome to be back. I mean, how can you not like coming to the rink? It’s a tough pill to swallow when you don’t make the playoffs and your season ends at the end of the regular season, and you’ve basically got 60 days or whatever it was to watch the start of the Stanley Cup Playoffs until the end of it. Teams are playing and you’re watching, that’s not a real feel good situation. As you follow along in the American Hockey League and see some teams you played against, some teams that we, because we don’t cross over, didn’t see, you think about how we would’ve matched up against those guys. I guess, if you look at it and you evaluate it, Charlotte was pretty darn good from start to finish and pretty consistent along the way and they won themselves a Calder Cup. Good on them, good on Mike Vellucci, I know him well, he did a great job. It just makes it long, and you’ve got a yearning for you should still be playing, so hopefully both the Kings and the Reign, we can get ourselves improved here over the summer and into the regular season and hopefully we’re competing in the postseason.

On his role this week, not being on the ice during development sessions
Actually, to this point we haven’t seen a whole lot because we’ve been having coaches meetings, both the Kings staff and Reign staff have gotten together and we’re trying to whittle away and go through the upcoming season, whether it’s training camp or the schedule for that, the exhibition games, the regular season, Todd’s view on the game and the systems that he likes to play. We’re actually sitting down, going through each zone, each situation and we’re bouncing some ideas off each other. He’s been great about having an open mind to suggestions or things that we’ve done before or somewhere else and applying it, but ultimately, it’s going to come down to the gameplan that he wants to execute and have the Kings doing and we’ll try to duplicate it as much as possible, so that our guys are familiar with the terminology, the verbiage that’s used in describing certain situations. So, if they get called up and get to play for the Kings, they’re feeling a little bit more comfortable. It’s a good thing, we’re learning stuff every day and I think that’s a good thing for the entire coaching staff.

On how having four Kings coaches since April 2017 changes his philosophy and day-to-day
Again, it’s good in the fact that you’ve had different guys because you’re getting different ideas and different thoughts. Not so good for the people that were here and left, because they did a tremendous job and they’re all good personal friends. I didn’t get to know Willie that well, but you appreciate the amount of time and effort and the work they put into it, the commitment they put forth. I guess the other way of looking at it, is now some of the onus is on the players, that you can’t just keep changing coaches, we’ve all got to buy in and make sure everybody is doing what we need to do. Part of that is us selling it as coaches, whether it’s at the NHL level or the American League level, we have to sell the product and sell the plan to the players and give them every opportunity to succeed. That’s the challenge. You can write something down and hope they absorb it, you can show video and hope they pick up what you’re talking about. Sometimes, you have to stop in practice and physically move guys around into the positions you want them to be in, whatever it takes for them to understand the message. Some guys, you can tell them once and they’ve got it. Other guys, you have to repeat, you have to be patient and hopefully find a way and if they aren’t understanding the message, then it’s up to us as coaches to find another way to deliver that message.

On what he hopes to see from players throughout this week
You want them to see, first of all, what there is to offer here. The facilities, the organization, being one of the upper-echelon organizations throughout the NHL. For a lot of years, people were building their models off of the Kings, and you want them to know the amount of work that’s involved. They’re trying to instill that compete in them, that it’s not acceptable to miss the playoffs or fall short of our goals. We expect and we demand a lot, but you still try to create it in a fun environment, it’s the end of June going into July. They’re not making the team today or tomorrow, you know that it’s a process and this is one of the first steps along the way. When they come back in September for training camp, hopefully they’ll feel a little bit better about themselves and have a little bit more confidence in the fact that they were here and might not be as nervous, but they’re also going to be a little bit further along in the knowledge department of what’s to expect. I just think it’s good for everyone to get together this time of year and, whether it’s coaches or the development crew or the players. These young kids, they come in and they’re seeing the guys that are working out with the Kings. Jeff Carter’s in here, Kyle Clifford and the list is long that are working out here and it’s kind of nice for these young kids to walk in and see those guys, train in the same facility and on the same ice and have a look at the locker room. Hopefully that’s what awaits them down the road. It’s just good. Coming to the rink, that’s the best thing about hockey, coming to the rink.

On if he’s got his eye on the “new pros” when he gets the chance to see the players on the ice
Well, there’s always going to be guys that kind of jump out at you, whether it’s their size, their skating, their puck-handling ability. Again, this is a little bit more of a controlled environment, to let the players learn in a fun environment. It’s not like when the regular season stars, the puck drops, the bullets are flying and they’ve got to be thinking on their feet and as the season goes on, how they handle the grind and the day-to-day routine, the practices and everything else. It’s hard to sit there and say “oh, this is a can’t miss prospect” or whatever. You’d like to think they’ve all got a chance and if they have an off day here, it’s certainly not going to reflect going into training camp. If they have a great day here, it doesn’t mean they’ve made the team, you know what I mean? So you just take it as it is, it’s a good chance just to get to know the kids on a personal level, maybe put a name to a face and just encourage them that this is just the start of the process. Training camp’s not to far down the road and just get a feeling for them as players, but more so as individuals.

On how his summer’s been so far
Summer’s been great, from a family standpoint. Seeing my kids, seeing my grandkids, seeing my parents, my extended family, trying to catch up on lost time on the things you miss out on during the course of the year. I hadn’t seen anybody since I left last August and then you get home and try to play catchup. As far as the weather goes, it could improve, hopefully it will as we get into July coming up here. It hasn’t been warm and it hasn’t been dry, but it is what it is, so you make the most of it.