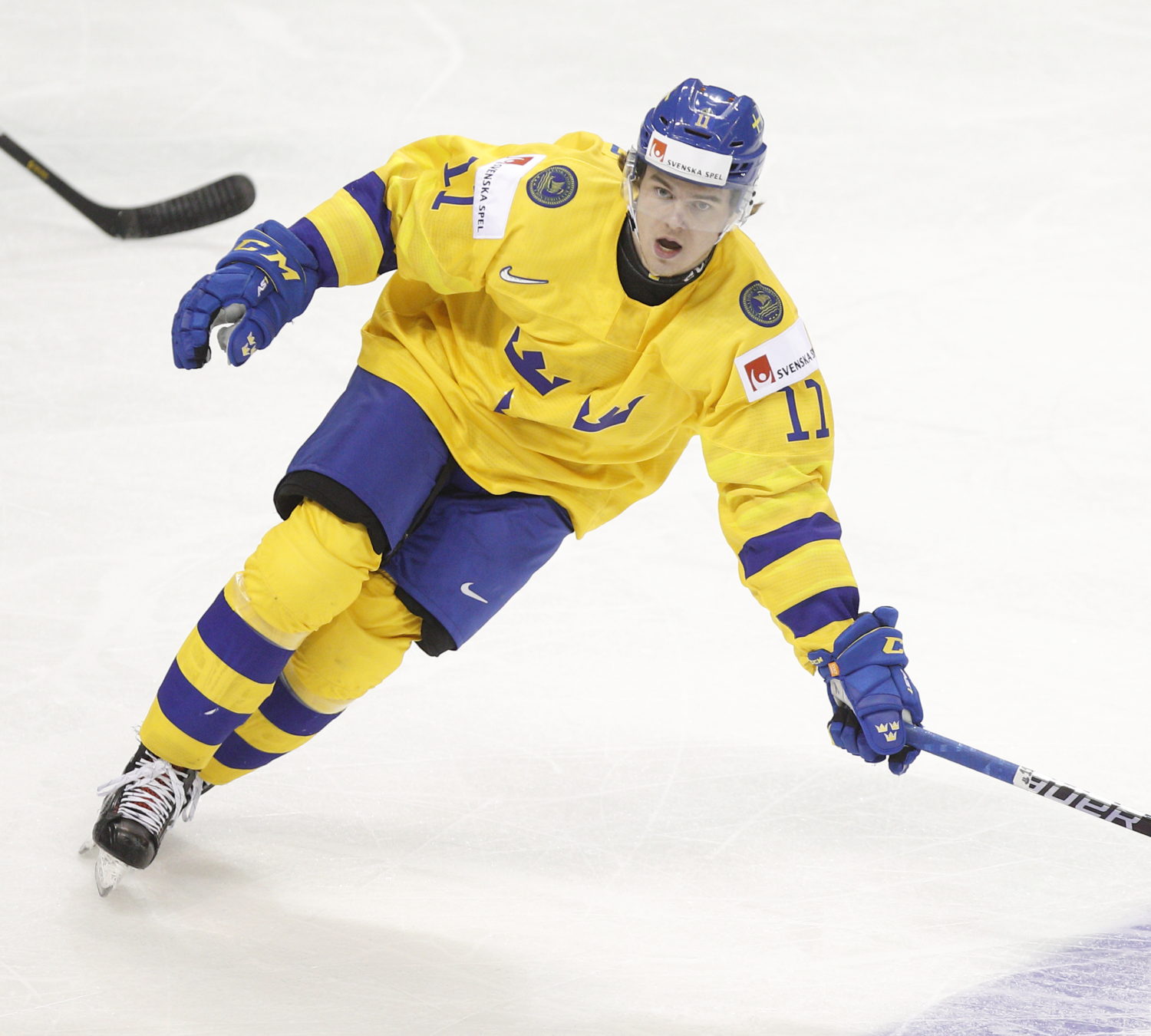 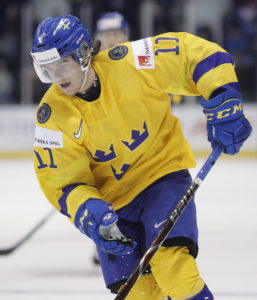 • A three-time medalist on the international stage, Fagemo helped his country earn gold at the 2016 World Under-17 Hockey Challenge where he was named a tournament All-Star after notching 2-5—7 in six games, bronze at the 2017 Hlinka Gretzky Cup where he scored at a goal-a-game pace (5-0—5 in 5 GP) and bronze at the 2018 Under-18 World Championship.

• His father, Linus Fagemo, played professional hockey in Sweden, Germany and Denmark from 1995-96 to 2011-12. In 2007-08, he was a member of the Herning Blue Fox team that captured the Danish league championship.

• Models his style of play after Stars forward Tyler Seguin.

Corey Pronman’s final ranking: 31
(subscribe to The Athletic here)
Fagemo went undrafted last season after a good, albeit unspectacular, draft season. He started off briefly in the J20 Sweden ranks but quickly rose up to the SHL. He was extremely productive for an 18-year-old, getting significant minutes and power play time for a Frolunda team that won the SHL. He was also impressive at the world juniors. Fagemo isn’t a guy who wows you in any one area. He skates well, but he’s not a blazer. He’s skilled but won’t have a highlight reel rush. He has a good shot and can score goals in a variety of ways, be it a hard drive or picking a corner from the circles. Fagemo gets a lot of chances close to the net, and despite not being that big or strong, he drives the net hard. He showed flashes of top-end hands and vision, but not consistently. The skill set on its own doesn’t overly excite, but it’s hard to ignore his incredible production.

Sweden’s U20 coach Tomas Monten on Fagemo: “I like his attitude and attack mentality. He skates well and drives the net. He wants to play on the inside. He has a good shot. I think the biggest difference on Samuel this year is that he’s better conditioned. He’s faster and stronger. That made a big difference to his game.”

McKeen’s final ranking: 39
(subscribe to McKeen’s here)
Fagemo is not the only, nor even the highest ranked second year eligible player in our draft rankings. But on behalf of our Swedish correspondent Jimmy Hamrin, please indulge us a mild “I told you so” as we thought he should have been selected last year. After a solid season in the SuperElit and a decent showing in the WU18 tournament, a wise team could have had him with a late round flier. Instead, he went back to Sweden, scored 10 goals in eight SuperElit games and then continued to score in the SHL, pausing only to play for Sweden at the WJC. His SHL scoring numbers were the best among all teenagers in the league, outproducing even Dominik Bokk, who was selected in the first round by St. Louis last year, and a number of other high picks. In the last year, Fagemo has become a better skater, with better sustained top speed. His game has grown more intense and he can be difficult to contain. He is a creative player with good hands, but his offensive game depends on his drive to shoot the puck. He can score from long range or in tight. His shot is as hard to stop when he shoots from within traffic as it is when gets a shot off cleanly. He has a knack for getting into open spaces and pushing the game in the right direction. He still needs to improve his work away from the puck, but he is not a net negative there as much as he is not the type a coach puts on the ice to protect a late lead. After being passed over last year, Fagemo looks like he has top six potential and will not have to wait long on day two to hear his name called this year.

Future Considerations final ranking: 85
(subscribe to Future Considerations here)
A speedy skater who can drive hard to the net despite his rather small frame, Fagemo displays decent puck skills with stickhandling that allows him to beat defenders one-on-one and create space for himself. He has quick first steps with the puck at times, but he lacks top speed to be able to go around defenders and tends to get pushed to the outside when entering the offensive zone. He tends to play a low-energy game unless he has a scoring chance around the opposing net. While he is dangerous around the net and has a decent wrist shot with a quick release, the rest of his game is lacking and he makes too many mistakes with the puck in his possession. He isn’t consistent in his effort and shows a lack of vision and composure with the puck, often relying on teammates to create offensive opportunities and scoring chances. Tends to make too many bad no-look passes even when he isn’t being pressured. Displays strong anticipation defensively as he anticipates turnovers, allowing him to receive a pass to break out of the zone. However, he sometimes gets too ahead of himself and he leaves the zone before his team does. Too quick to jump on offense. He can be too passive in his own end and at times disinterested in defending. He needs to work on his overall game and make better decisions with and without the puck. 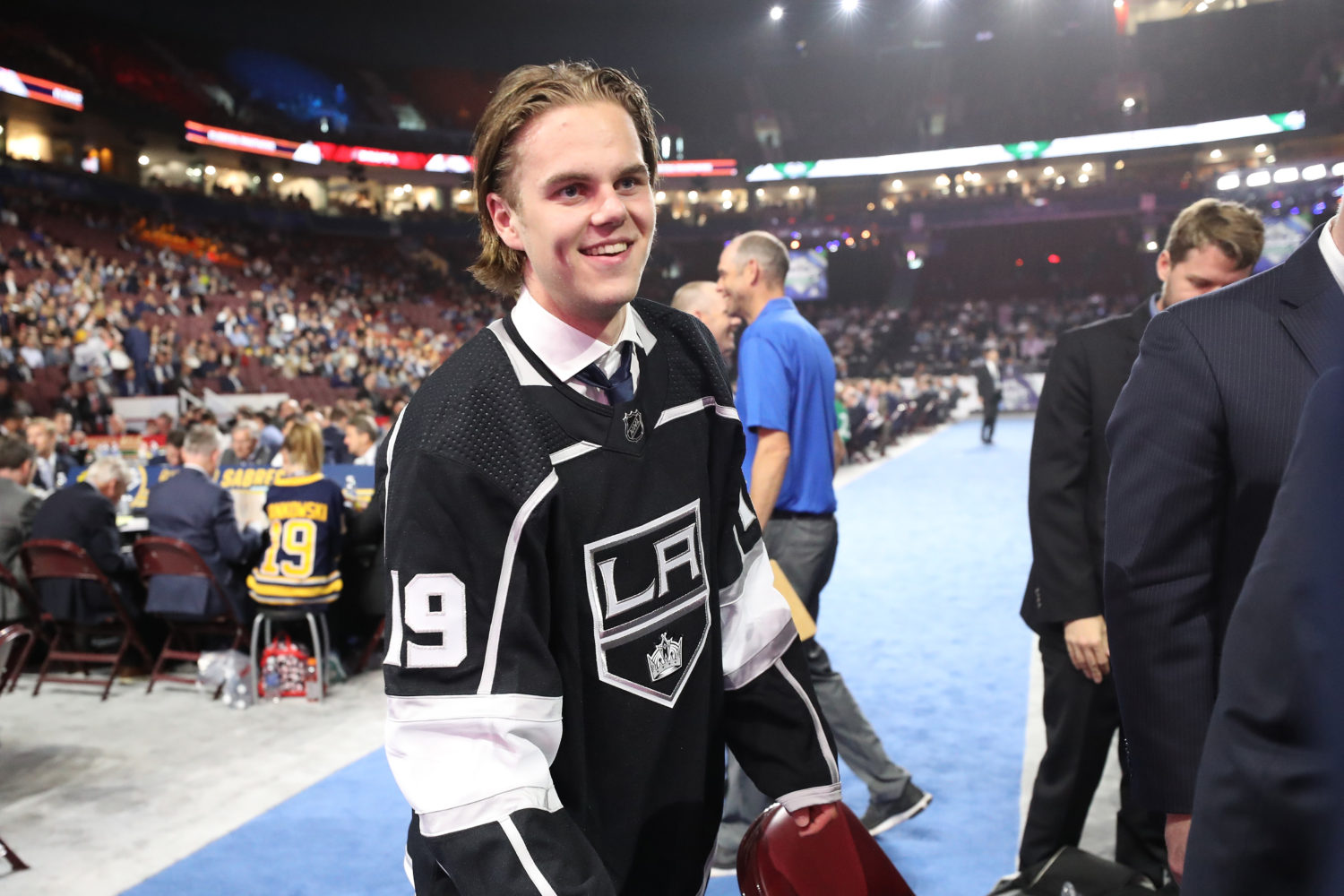 Samuel Fagemo, on the excitement of hearing his name get called:
Yeah, oh my gosh. It was a great feeling and it was a great experience to be here at the draft and just see how it works. It was so much fun to get drafted by such a great organization. It’s such a great feeling for me and my family to be here and to see all of the things. So much fun.

Fagemo, on any relationship with young Swedish players in the organization:
Yeah, a little bit. Jacob Moverare too, in Frölunda too. It just feels great to be here and I’m really excited to come and join the Kings right now.

Fagemo, on having been passed over in the draft last year:
For sure, it was a lot of motivation for me to show the scouts in the stands that I can be drafted too, you know? Yeah, I’m still pretty excited to get drafted right now and I’m very thankful to get the support back home too. My family and stuff like that. I’m super happy to get drafted finally. It is fun right now.

Fagemo, on the atmosphere while developing with Frölunda:
It’s unbelievable. It’s great facilities, it’s great coaches, and great fans, and a great city to play in too. It’s a perfect place to there and develop and play hockey there. It’s a great hockey city I think, so it’s been good.

Fagemo, on what he learned from winning a championship:
I think it’s hard, winning playoffs. You need to be prepared every day. Stay focused and really want to win every battle and play full 60 minute hockey. It was a great experience to play a long playoff round and finally win the championship. It was a fun experience and a great memory for life.

Fagemo, on what he aims to improve upon before transitioning into the NHL:
I think my defense. Stay focused on my defensive zone for 60 minutes. It’s such a great league here in the big league, so you need to be good in the defense and offense. I think my defensive play I need to develop more to play in the biggest league in the world.

Fagemo, on who he models his game after:
Many players I think. Filip Forsberg in Nashville. He likes to shoot the puck and take the puck to the net. Ovechkin too. He shoots the puck every time and takes the puck to the net as soon as possible and wants to score and help the team to win. I want to do that too. I’m super excited to come to a great club right now and get things started.

Fagemo, on whether he’ll remain with Frolunda in 2019-20:
Yeah, I’ve got one more year on the contract.

Fagemo, on his hometown:
I was born in Gothenburg, so it’s pretty special to play there now with Frölunda. I am born there.

Fagemo, on whether he ever thought about becoming a defenseman:
… No, just forward. I love to shoot the puck and score goals, so forward.

Fagemo, on how long it took him to get over not being picked in last year’s draft:
I was home. Back home I followed on the TV with family and friends and it was tough to not see my name get picked by seven rounds. It took like 2-3 days maybe to drop it off my shoulders and got a lot of support back home. Throughout that I just kept working hard and believing in myself and all of that and now I’m here. I am super proud of that and I’m really excited to get things going right now.

Fagemo, on whether he’s been to California:
No, I don’t think so. I’m super excited to come to California and it’s a really nice weather there so it’s going to be very exciting.

Fagemo, on whether he has any relationship Tobias Bjornfot:
Yeah, he’s a nice guy, I think. I’m happy for him too. It’s going to be fun.

Fagemo, on what he views as his best asset on the ice:
My shot. My scoring mentality, I think. My shot and taking the puck to the net and helping the team to get success by scoring goals. 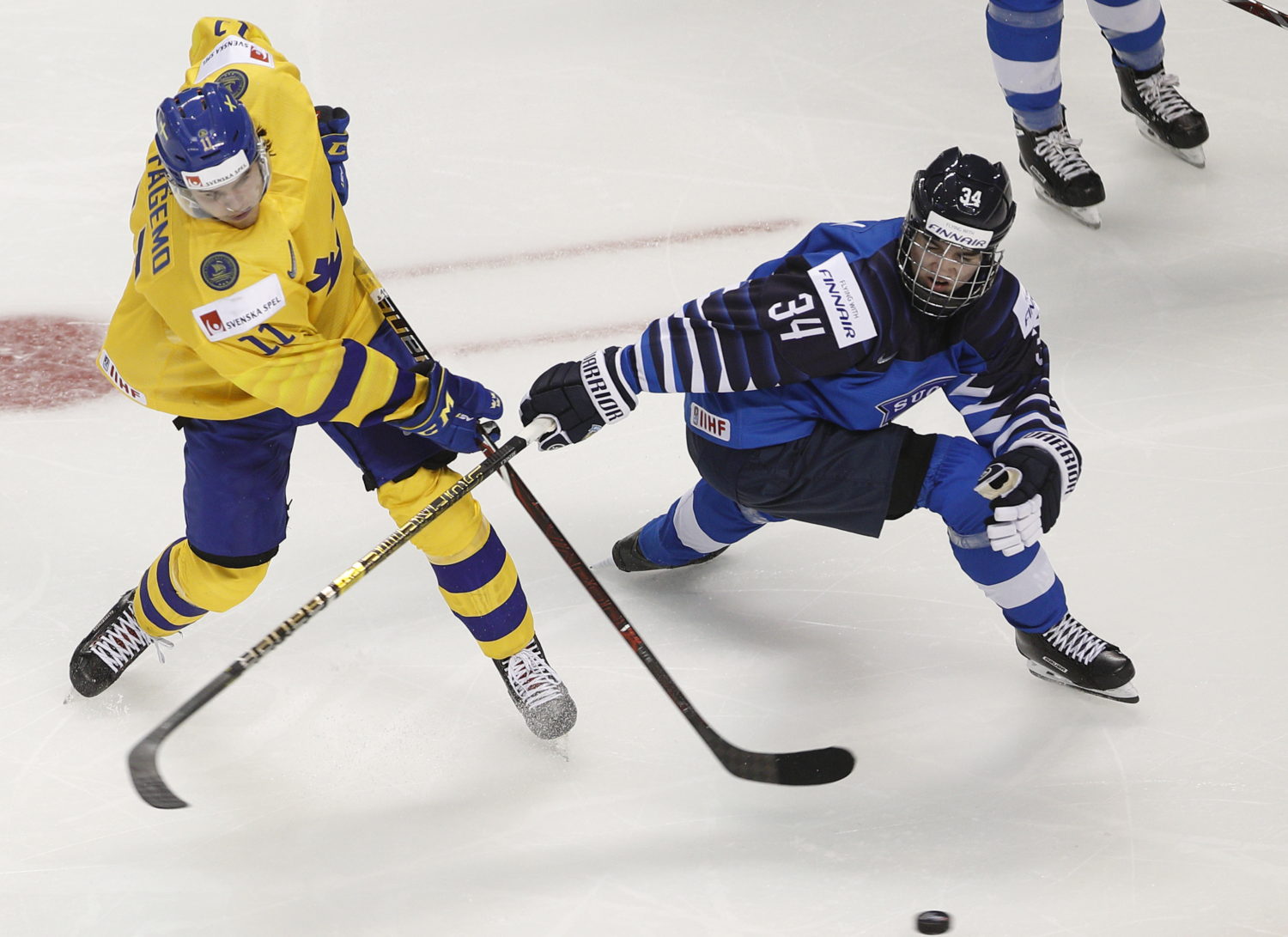