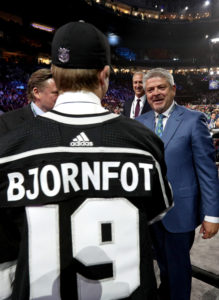 A familiar fixture internationally who drew constant eyes on the Tre Kronor blue line along with fellow first round selections Philip Broberg (Edmonton/8th) and Victor Soderstrom (Arizona/11th), Tobias Bjornfot had a fine draft season, earning best defenseman honors in Sweden’s top U-20 league and earning a late-season and playoff call-up to Djurgardens late in the season. His offense didn’t explode, but he carved out a consistent and versatile niche as a competitive multi-situational minutes eater with good mobility.

More revealingly, his pick, coupled with the pick of Alex Turcotte at fifth overall, provides the Kings with a pair of players whose character has been lauded — and it also highlighted the team’s continued deference to competitiveness and work ethic while they continue to look to add speed and skill throughout the organization.

“I think it’s no secret – the character and the compete level,” Rob Blake said of Turcotte, though he might as well have said it of Bjornfot. “We found that to be a very important ingredient for our first round picks, both of them.”

Bjornfot captained Sweden to the gold medal at the U-18 Championship as the host country this past spring, marking Sweden’s first title in the event. He’s worn an “A” for Djurgardens’ U-20 and U-18 teams and captained Sweden’s Hlinka-Gretzky Cup team. Like most of the players selected 22nd overall, he’s a project who’s at least a year away from playing in North America, telling LA Kings Insider he signed a two-year extension with his Stockholm-based club in January. He’ll be eligible to play at World Juniors for the next two years, and that 2021 Sweden squad could potentially be something to behold on the back end.

Sharing that he models his game after Anaheim’s Hampus Lindholm, Bjornfot is expected to take longer to get to the NHL than Lindholm, who was drafted sixth overall in 2012 and was an effective NHL defenseman as a 19-year-old.

“He is a two-way, strong skating defender,” said Christian Ruuttu, Head European Scout. “He can play the power play and penalty-kill and is a leader on his team highlighted by the gold medal this past spring, the first gold medal Sweden has won in the Under-18 Worlds. Each player we talked to talked about Tobias was him being a leader on their team. He is a special character player as well.”

Having already put on bulk and weighing in at 203 pounds at the NHL Draft Combine earlier this month, Bjornfot should be well prepared to step into Djurgardens’ senior lineup this coming season.

Corey Pronman’s final ranking: 37
(subscribe to The Athletic here)
Björnfot was a touted prospect for a few years and a minutes eater for Sweden’s international teams, including being one of the best defensemen at the U18s and named the best defenseman in Sweden’s J20 league. His skating provides a lot of his value. His ability to lead a rush, pinch off the blueline and close on his checks is very good. His feet allow him to make stops and transition pucks. He has solid defensive acumen and generally is trusted by coaches to play tougher minutes. His puck game is average. He can have the odd flash offensively due to his feet and above-average vision. His skill level doesn’t overly impress, but there were times, particularly in the second half of the season, he showed more confidence making creative plays. He could be a reliable two-way defenseman in the NHL who might not put up points.

NHL scout on Bjornfot: “He’s not flashy, but he’s a very mobile and smart defenseman. He kills a lot of plays, can skate pucks up and can give you some offense.”

McKeen’s final ranking: 19
(subscribe to McKeen’s here)
Before his draft year got officially underway, he played in the Hlinka Gretzky Cup, further establishing his defensive reputation, showing growing calmness in his own zone and playing a regular penalty killing role. While he did spend a small portion of his draft year in the SHL – even playing in the playoffs for his SHL team, he spent most of the year again in the SuperElit, earning himself the nod as the league’s best defenseman. That last reward was a recognition of his growing two-way game as his offensive game was good, but not near the head of the league.

At this point, Bjornfot is a legitimate two-way defender, with the ability to contribute at both ends and in all game situations. He rarely makes the same mistake twice and is almost always found on the right side of the puck. He is helped in the latter endeavor by his strong four-way skating. He is a long strider, who can cut down on the length when he is accelerating allowing him to conserve energy.

While he did not produce the kinds of numbers this year as he had in the past (especially internationally), he still has a full set of offensive tools in his bag. He has a good wrist shot with velocity and a quick release. He lacks the kind of slapshot typically associated with a powerplay quarterback though.

He is a solid stickhandler and good passer, as likely to make the simple, safe play as he is to attempt something more challenging. Bjornfot also has respectable size for the NHL game, with the strength to match. He can handle pressure in his crease and can bring out an aggressive streak, although that isn’t his first recourse. The narrative around Bjornfot has been steady throughout his time on the prospect radar. What you see is what you get. That is, a nice future number three blueliner.

Tobias Bjornfot, on getting drafted by the Kings:
… I’ve got my family and it’s a dream come true, so it’s an amazing feeling.

Bjornfot, on whether he knew the Kings would take him:
No. I had a good meeting with them at the combine and I got to meet Rob Blake, so I think they were impressed with me, but I had no clue.

Bjornfot, on what he believes sold him to the Kings:
I think I would say it was my leadership. I take big responsibility on and off the ice. Obviously my leadership and my skillset.

Bjornfot, on how he has served as a leader:
I’ve been captain of the national team of Sweden and taking care of the guys and having good communication with the coaches, too. I think I have it natural.

Bjornfot, on playing against Turcotte in the U-18s:
The USA team has a good roster and we lost against them in the U-18 Worlds, so they’re a good team and Turcotte of course is a tremendous hockey player too.

Bjornfot, what he thinks he can bring to the Kings franchise:
It’s a great organization and a hockey market, and a great city too, so they have Adrian Kempe and Carl Grundstrom too– so Swedes– and it’s a great city and i think i can bring my leadership and my defensive game to the club.

Bjornfot, on whether he’s been to California before:
No, never.

Bjornfot, on what he’s looking forward to about California:
To meet the organization and maybe get some tan before I go back to Sweden.

Bjornfot, on how he would describe his personality:
I was like a typical Swede. A calm person who likes to have fun.

Bjornfot, on his contract with Djurgardens:
I signed in January to two years.

Bjornfot, on his family and whether they have any sporting background:
Not a big [inaudible], but my dad plays soccer and my mom and sister swim.

Bjornfot, on whether he followed Mattias Norstrom when he was younger:
I watched some games when I was young.

Bjornfot, on if there is another Swedish defenseman that he looked up to growing up:
You know, Nick Lidstrom was a big role model for a lot of [inaudible].

Bjornfot, on how he’d describe his play:
I would describe myself as a two-way defenseman with a good defensive zone and good skating abilities.

Bjornfot, on following the NHL from Sweden:
I watched the finals in the morning and some games and if like Stanley Cup playoffs are on.

Bjornfot, on if he has watched Drew Doughty play:
I’m a two-way defenseman, so I think I’m similar to him.

Bjornfot, on whether he ever gets fired up as a leader:
Sometimes I get fired up in the locker room, but not so much. I think I’m a calm person.

Bjornfot, on whether he heard the music that was playing while he walked to the stage:
I [heard] they had Mamma Mia.

Bjornfot, on what type of music he likes:
Pop music and Abba – Swedish stuff. [laughs]

Bjornfot, on who came to the draft with him:
My family members and my cousins and my agents – I would say eight from my family and four or five agents. [Reporter: Who represents you?] In Sweden, Johan Lindstrom (?), in Canada Claude Lemieux. 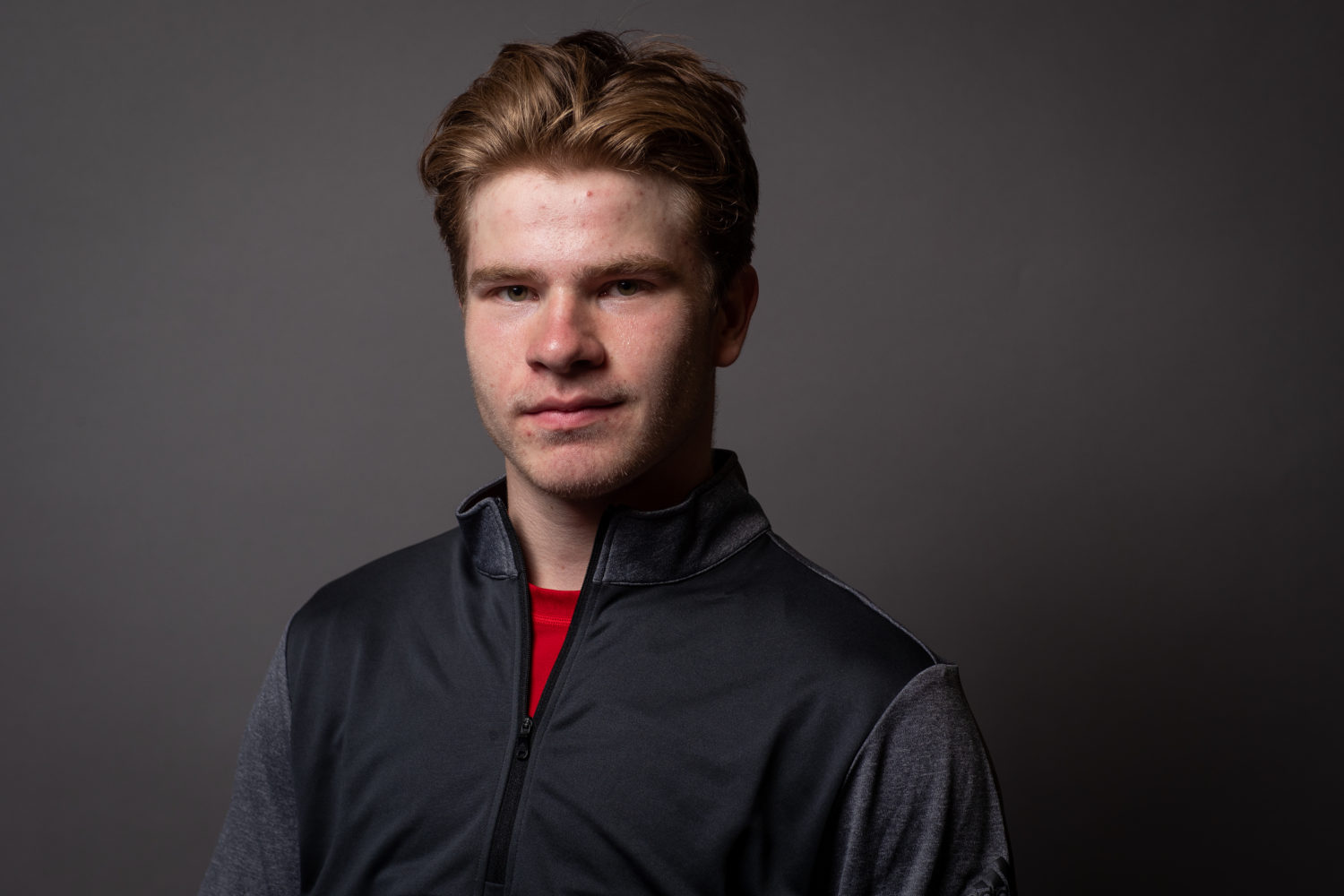