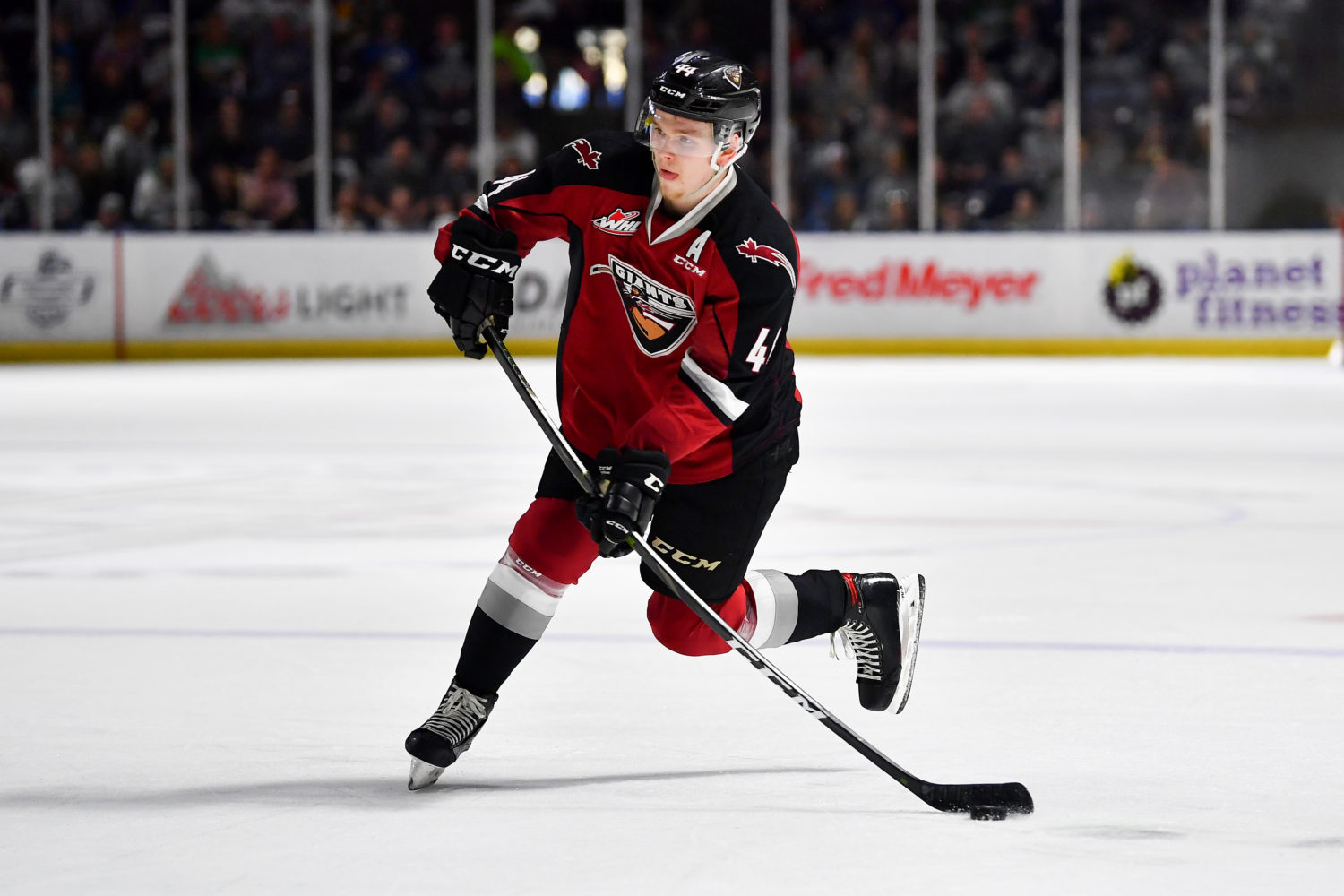 You recall the disclaimer. The LA Kings are slotted to pick 5th and 22nd in the first round of the 2019 NHL Draft, June 21 at Rogers Arena in Vancouver. They might take Vancouver Giants defenseman Bowen Byram with that fifth pick. They might not! They probably won’t! As part of the recurring Royal Lineage feature, LA Kings Insider will familiarize you with a handful of players who may be available when it’s Los Angeles’ turn to step towards the podium for the first time next Friday.

And to get you familiar with Byram, one of several highly touted WHL skaters expected to be drafted in the first half of the first round, LAKI reached out to Vancouver Province reporter and fantasy baseball sage Steve Ewen, who has owned the Giants beat for many years and I’d bet my LAKI Platinum Status has covered Byram live more than any other reporter on the planet.

This is technically bonus content. I wasn’t planning on writing a Byram profile! That’s because when I’d reached out to Steve a month ago, there wasn’t any way the consensus best defenseman in the draft would fall to fifth overall on the heels of a playoff run in which he led all WHL skaters in scoring. But now… there’s a chance? A decent chance? I think there might be a decent chance. Define “decent.” The fine print is below, but Byram falling to five would be a welcome development for a team that’d love to get its hands on an elite skater who aligns with the team’s evolved bent and schematics, fills an organizational need and isn’t expected to take much time at all to play in the NHL.

Tipped off in January by a tenured Western Hockey League colleague that a young defenseman was as talented as any he’d seen in the league in 20 years, I reached out to an NHL source to get his sense if the hype that was beginning to spread beyond the WHL’s boundaries was warranted, exaggerated or some blurry spot in between.

His response: “He is that good. I would put him in Drew Doughty category.” 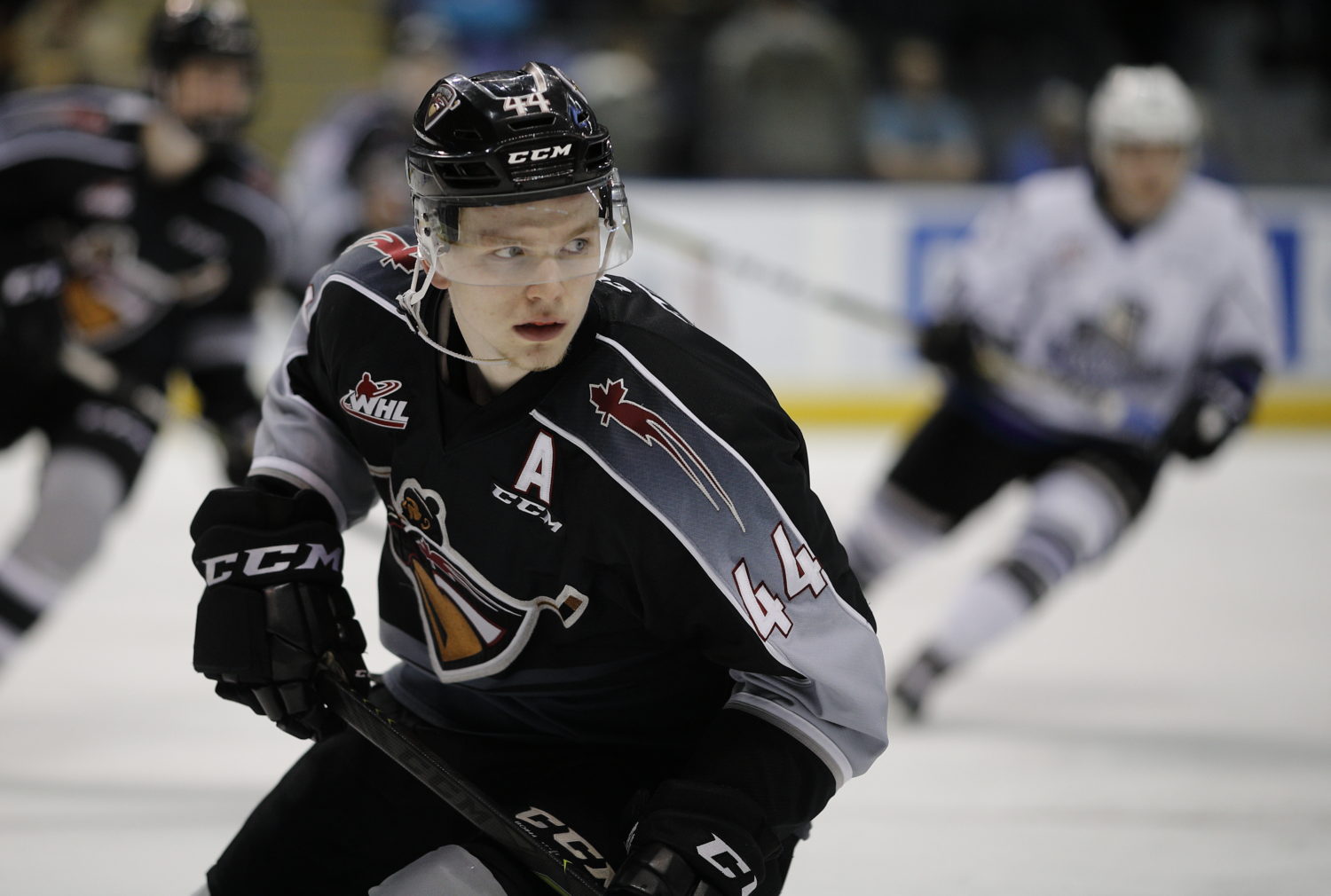 Say, that doesn’t oversell an 18-year-old, does it? But Byram, the consensus top defenseman in the draft, has a multidimensional skill set that very clearly aligns towards the offensive part of the game. He doesn’t quite project as a showstopper in his own zone like Doughty, but is still equipped with the mobility and snarl necessary to close on opponents and compete for pucks. Via McKeen’s Hockey:

As the WHL season progressed, Byram seemed to take additional steps forward in his game month after month, if not week after week. He grades out spectacularly across the board, but no area of his game is as advanced as is his skating. His feet are incredibly smooth, and he can move effortlessly in any direction with agility, changes of gear or direction and a fantastic first few steps to kick things off.

As a high scoring defender, it is no surprise that he is giving a lot of leeway to shoot the puck, having led the Giants in shots this year by 25 over the runnerup. His wrist shot has great snap and finds a path to the net regularly. When he winds up for a full slapper, he lets off a bomb that is hard, heavy and accurate. He can shoot to score (clearly), or to create an opportunity for a deflection or a tip.

Even more impressive than his shot is Byram’s ability to handle the puck. He is a near elite passer from the blueline, just as comfortable with a short pass as with a stretch pass, or flip pass, or bank pass, or a pass that he hasn’t invented yet and that remains nameless. He is a commanding quarterback on the power play and can protect the puck masterfully until he makes a decision on whether to shoot or pass. Either way, the defense will have to respect his ability to beat them. Simply put, on the offensive side of the ice, Byram sets the pace.

He’s also got a good amount of bite and competitiveness in his game that should register as an attribute rather than any shortcoming in his play apart from the puck, and his elite skating allows him to cover enough ground to disrupt plays on the backcheck after activating. This isn’t a player who profiles as a situational, power play point producer, but rather a poised, all-situational, top-pairing stalwart equipped with the all-important ability to exit his own zone cleanly and contribute to clean offensive zone entries. He’s the best defenseman in the draft at a lot of things, including in his work at both blue lines. Corey Pronman does a good job using video clips to showcase his playmaking while also calling attention to his vision, which he acknowledges “has been a point of debate among scouts this season.” It’s required reading for those with a subscription. 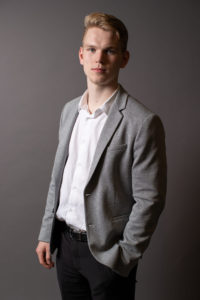 In L.A.’s organizational chart, Byram fills a significant gap. Though the team has taken tremendous strides to rebuild its prospect pool over recent years, they’re yet to draft a defenseman who profiles as a number one. And while Byram serves as an asset for the future, and the team’s needs will evolve as they look to further implement a needed infusion of speed and skill, they also have identified a more immediate need of a number two defenseman/top-pairing left-shot defenseman after trading Jake Muzzin. When you pick fifth overall, though, you’re not necessarily picking for a need or position as much as you’re using your organizational philosophy to find the best player for your team available. It just so happens that a player who provides both could be there for them, which would deliver an appropriate amount of consolation after a dreadful season resulted in the disappointment of falling three spots down the draft board.

“We’ll do more fine-tuning work now, but in terms of our pick at five, we have it narrowed down to two players, barring someone falling,” Director of Amateur Scouting Mark Yannetti told LA Kings Insider correspondent Heather Engel at the NHL Scouting Combine.

The team isn’t inclined to share additional details towards a critical decision with the media, but from my interpretation, the Kings are looking at Kirby Dach or Dylan Cozens (slight chance that might be Trevor Zegras rather than Cozens) in the most probable event that Byram or Alex Turcotte are snapped up in some variation at three and four.

If we were drafting in a vacuum, yeah, Byram probably goes third. But if Los Angeles caught any bit of a break at the lottery, it’s that Chicago needs another defensive prospect like the city of Boston needs another championship parade. The Blackhawks drafted Henri Jokiharju in the first round in 2017 and Adam Boqvist and Nicolas Beaudin in the first round in 2018. All are defensemen. Boqvist appears to be on the fast track and Jokiharju potted 12 assists in 38 NHL games as a 19-year-old last season, so this week’s trend is that they’re more inclined to select Alex Turcotte, even as LAKI was told that GM Stan Bowman traveled to the Saskatchewan outpost of Prince Albert to view Byram at the WHL Championship and spent a considerable amount of time with him at the combine earlier this month.

Perhaps more probable is that Byram ends up in Colorado, where on a conference call, Avalanche Director of Amateur Scouting Alan Hepple indicated his club would draft the best player available. Via Mike Chambers of the Denver Post:

“He’s the new-age defensemen here in the National Hockey League,” Hepple said. “He skates, he moves the puck, his puck management is unbelievable. His sense for the game — he’s got that little bite in his game, that grit, that I think is important … He’s not going to be stopped. This kid is really good.”

To back up his support of Byram, Hepple said the Avs — who have two first-round picks and five in the first three rounds — will take the best player available at No. 4 and No. 16.

“We give (general manager) Joe (Sakic) the list and then he makes the call at the end of the day — especially the top-end picks, based on the fact that he knows them, that he’s seen them,” Hepple said. “Down the road, yeah, we need forwards right now but by the time some of these kids are ready to play we might need defensemen again. So it will be the best player (available), no matter, at 1 and 16.”

Colorado is taking leaps towards replenishing its defense by adding lefty Cale Makar to a rotation that also includes righty Samuel Girard, which, were Bowen to fall to them, summons the potential to provide a wealth of riches on the blue line for a decade or beyond.

It has also been credibly suggested that the Blackhawks will simply take the best player available, and if that’s Byram, they’ll select him regardless of their recent first round history.

But if he’s there at five – as has been suggested by plugged-in outlets recently – you’re looking at someone who’ll have the potential to be an opening night defenseman this season. 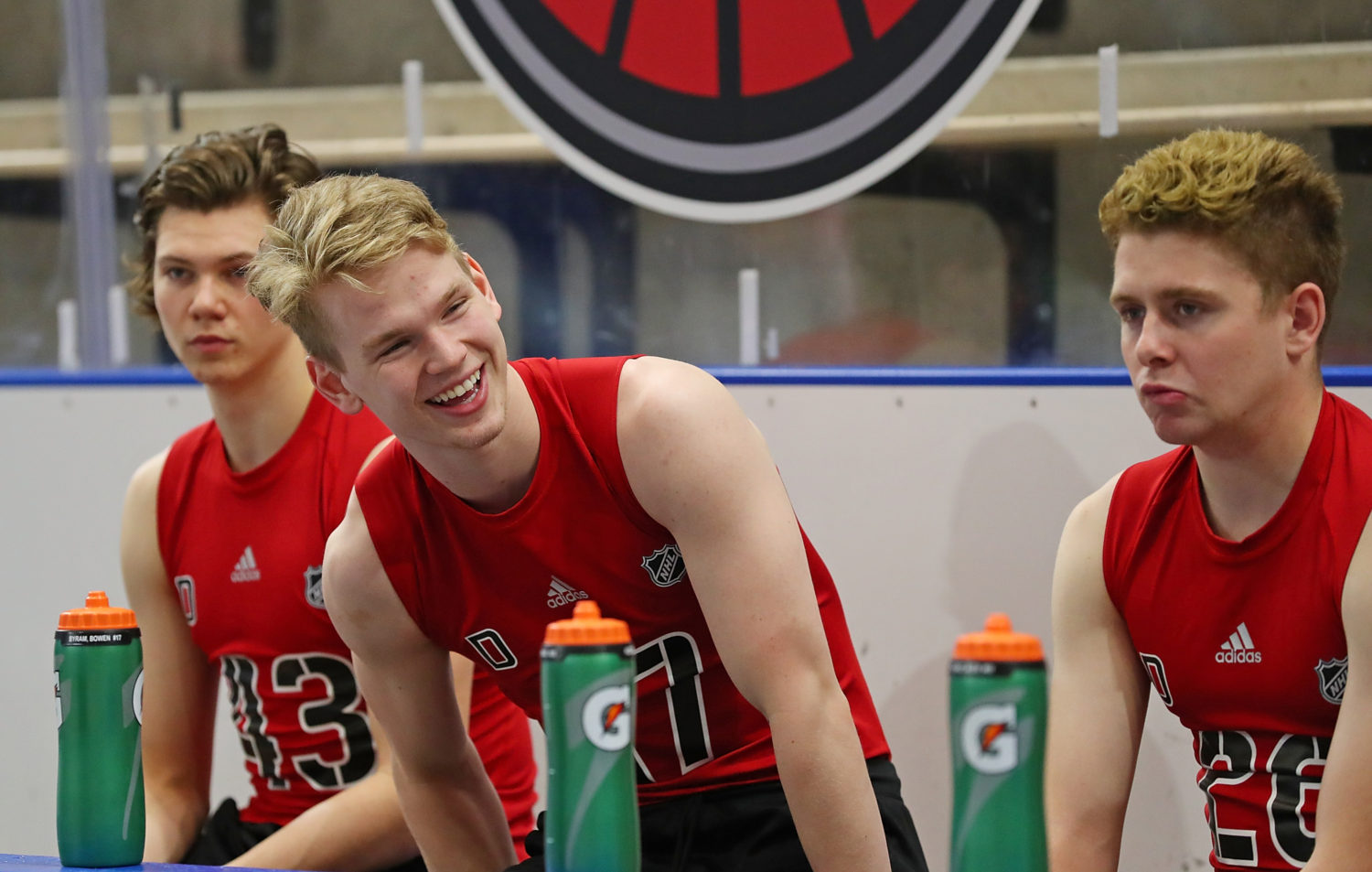