You recall the disclaimer. The LA Kings are slotted to pick 5th and 22nd in the first round of the 2019 NHL Draft, June 21 at Rogers Arena in Vancouver. They might take U.S. National Team Development Program forwards Alex Turcotte or Cole Caufield with that 5th pick. They might not! As part of the recurring Royal Lineage feature, LA Kings Insider will familiarize you with a handful of players who may be available when it’s Los Angeles’ turn to step towards the podium on Friday night.

And to get you familiar with these Badgers-to-be, LAKI reached out to University of Wisconsin Men’s Hockey Head Coach Tony Granato, he of 380 games and 305 points in an LA Kings uniform, a Legends Night, a special appreciation for Bob Miller, and an incoming class among the country’s best with five players listed in NHL Central Scouting’s final rankings, including Turcotte and Caufield among the top-10 North American skaters.

So! Alex Turcotte. Center. He comes with another disclaimer. He’s very possibly going to be the fourth pick in the draft. But there have been unforeseen variables every year – variables at that very fourth spot – and given that Jack Hughes, Kaapo Kakko and Bowen Byram appear poised to occupy the first three spots in the draft, whether he’s available at five likely will come down to a yes or no from Colorado.

Like Hughes, Caufield and several others who will be profiled for the fifth pick, Turcotte played for a dynamic U.S. National Development Team U-18 squad, where he posted 27 goals and 62 points in 37 games after moving past a pair of injuries that derailed the first half of the season. One was the dreaded hip injury that we know all too well, but Turcotte had a terrific second half, setting the stage for what was expected to be an important U-18 tournament that would influence how he’d trend towards the draft. Turcotte was actually sick at the event, with USNTDP U-18 team Head Coach John Wroblewski confirming on Adam Kimelman and Mike Moreale’s NHL Draft Class podcast that he was still rebounding from a bout of mononucleosis and playing at “around 75%.” He still managed to put up four goals and nine points in seven games, ranking fifth on the team in scoring, even though he had been zapped of strength for weeks and hadn’t practiced with the official tournament team prior to arriving late and joining them in Sweden.

Granato describes it best in our conversation, but much of what we hear about Turcotte is his skating and tenacity, and specific to his skating, his acceleration. And while he certainly profiles as a highly skilled offensive-minded player, he’s also an effective forechecker with a bulldog nature as a 5-foot-11, 180-pound center who goes to hard places at both ends of the ice to win pucks.

“When I saw him play the first time, the thing that stood out to me was how hard he played without the puck, so if the other team had the puck, he got it back for his team fast,” Granato said. “He reminded me of Jonathan Toews that way, he reminded me of Kopitar that way, and for a 15-year-old kid to understand and be that committed to it, especially when you’re that high end of a skilled player, was something that stood out to me.”

NTDP coach John Wroblewski considers Turcotte one of the driving forces of the team.

“Alex plays an abrasive style and is a jackknife because he’s got so many different tools,” Wroblewski said. “Jack Hughes is our most electrifying player but Alex is right there as our most valuable player because his game just transcends so much in so many different areas.

“He has grit, can slow it down, speed it up, bring it to the net or play on the half-wall.” 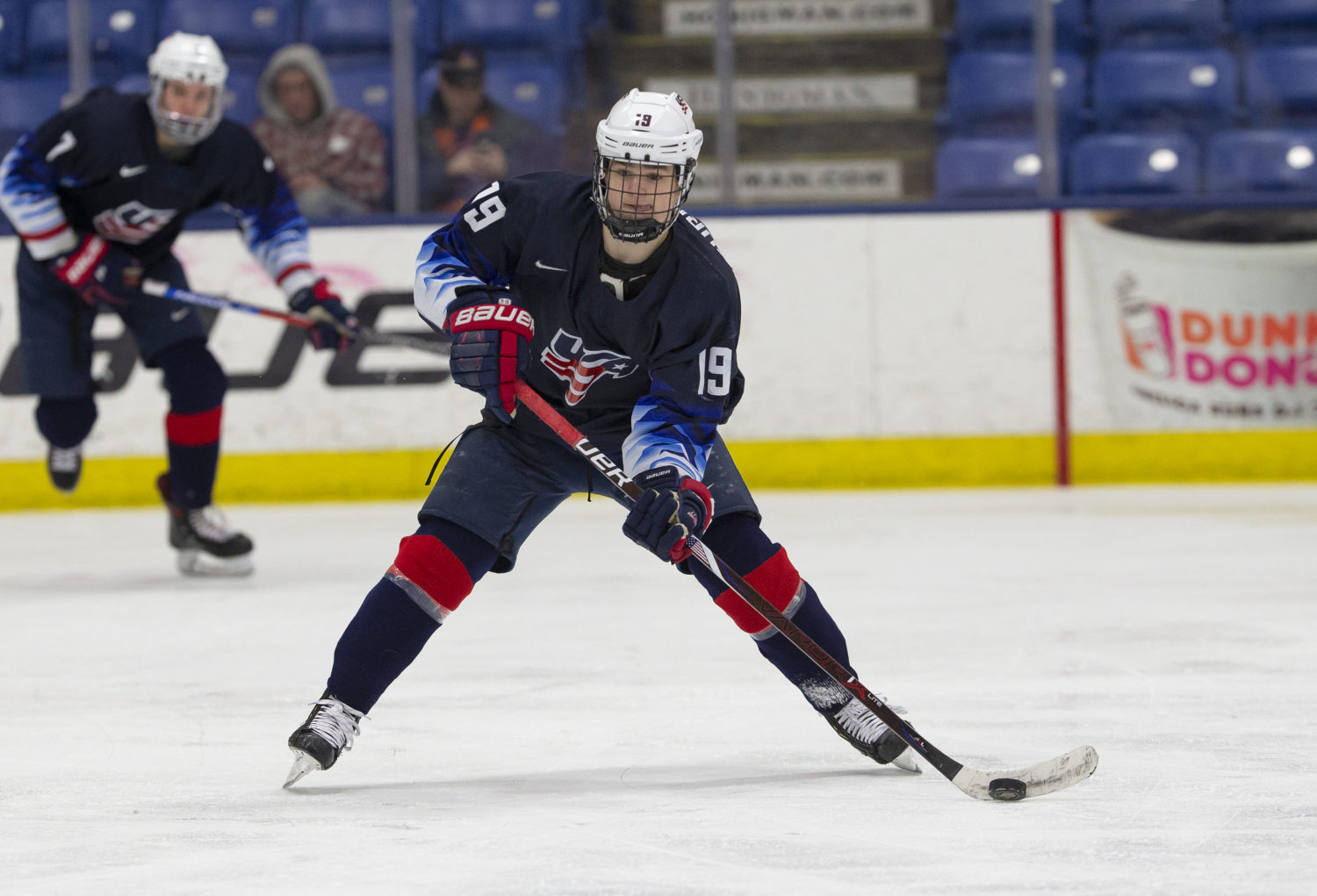 Keep in mind that these aren’t final rankings because the Royal Lineage feature is debuting earlier this year. There will still be movement that in Turcotte’s case will trend towards a selection as one of the earliest players chosen after Jack Hughes and Kaapo Kakko are off the board. Several rankings are yet to take into account players’ performances at the U-18 World Championship, and I’ll continue to share updates and developments relating to trends near the top of the draft. 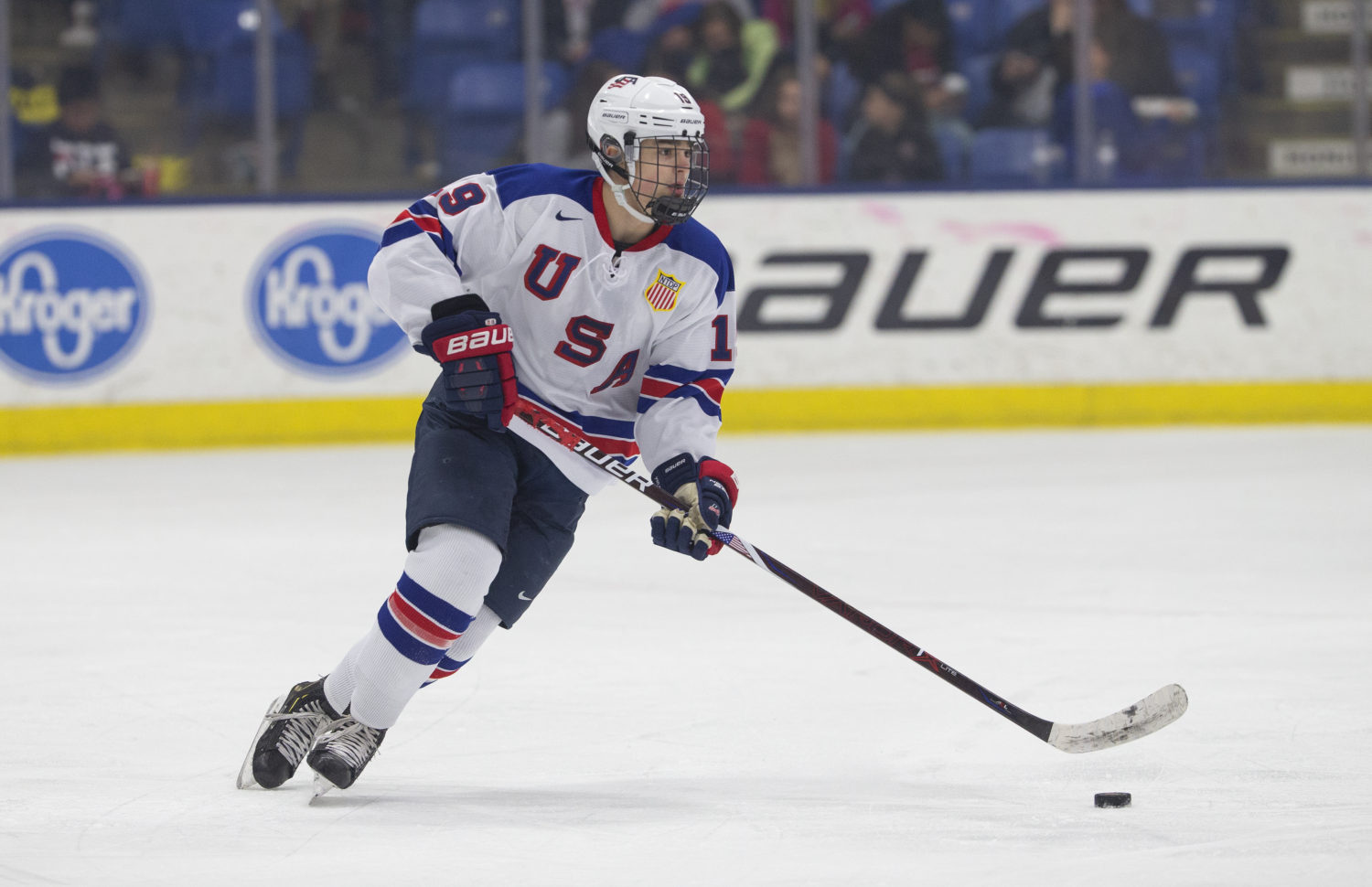 And, lo, Cole Caufield. Make sure you also check out Lisa Dillman’s recent breakdown on Cole ($), who is among those who will certainly be considered by Los Angeles. When you look at Turcotte, Caufield, Trevor Zegras or perhaps Matthew Boldy, the Kings could end up drafting their first USNDTP player since Hudson Fasching in 2013, and their first in the first round since Derek Forbort in 2010.

Caufield. In Upper-Midwestern syntax, it actually translates to “premier goal scorer.” He scored 14 goals in seven games at the U-18s! They say never to use punctuation, or profanity, but damn you, AP Stylebook, this is a blog, and we’re talking about Cole Caufield’s ability to bury the puck. Anyway, those 14 goals were five more than were scored by Jack Hughes, who ranked second in overall tournament goal scoring, and accentuates a season with the U-18 team in which he amassed 72 goals in 64 games. The previous single-season goal record was Auston Matthews’ 55 in 2014-15; Caufield also set the all-time NTDP record with 127 goals, which included 44 in 40 games with the U-17 team in 2017-18.

Also: He is 5-foot-7. Chicago sniper Alex DeBrincat, who didn’t turn 21 until December and still scored 41 goals this season, is also 5-foot-7, and their comparisons are inescapable.

Via Chris Peters of ESPN:

Caufield says he models his game after DeBrincat, the Blackhawks’ new star winger. The ability to find space and absolutely wire a puck are among the easy comparables aside from size and nationality. He has a natural scoring instinct that might even rival DeBrincat, who graduated from the OHL as one of the league’s top 10 all-time scorers.

“With Cole, it’s a combination of things,” says John Wroblewski, who coached Caufield the past two seasons with the U.S. team. “For truly great players, it has to be a mix, and he’s got it. It’s the truest stick I’ve ever seen coming through the NTDP. Everything that comes off of it is pure. But there’s something else there. It’s a burning desire to play the game. True enjoyment and elation every time the puck goes into the net. That combination is pretty deadly.”

It’s also important to note that born on December 18, DeBrincat was a late-birthday draft pick, while Caufield was born January 2, 2001 and was the oldest player at the U-18s. Malcolm Gladwell devoted the first chapter of Outliers explaining why that was important; there are skeptics as well as advocates of his study.

But while there is a tend towards a smaller, faster NHL, Caufield, like DeBrincat, is also a puck hound who retrieves well and wins pucks back, and once in the offensive zone is very capable of finding the soft ice to unleash his acclaimed shot. He was listed at 162 pounds at the U-18s, and while there’s work to be done on his lower body as he nears the pro game, Granato also cautioned against an obtuse one-track focus towards bulking up.

“His ability to get open and be elusive and find space in the offensive zone gives him the opportunity to use his greatest asset, which is his shot. So you don’t want to slow him down by putting on a bunch of muscle and weight just to put muscle and weight on,” he said, noting that Caufield will find success by playing the same type of game that resulted in such a dream season for the Under-18 team.

“To be able to do that, he’s going to have to rely on his quickness, he’s going to have to continue, strengthwise, especially through his core and through his legs, to grow and develop that way to play an 82-game season,” Granato continued. “But his pure ability and his ability to play in traffic has always been something that he’s been willing to do, and it hasn’t affected him in any way. He hasn’t been beat up, he hasn’t slowed down as the season’s gone along. For the most part, he’s been very, very healthy for a younger player.” 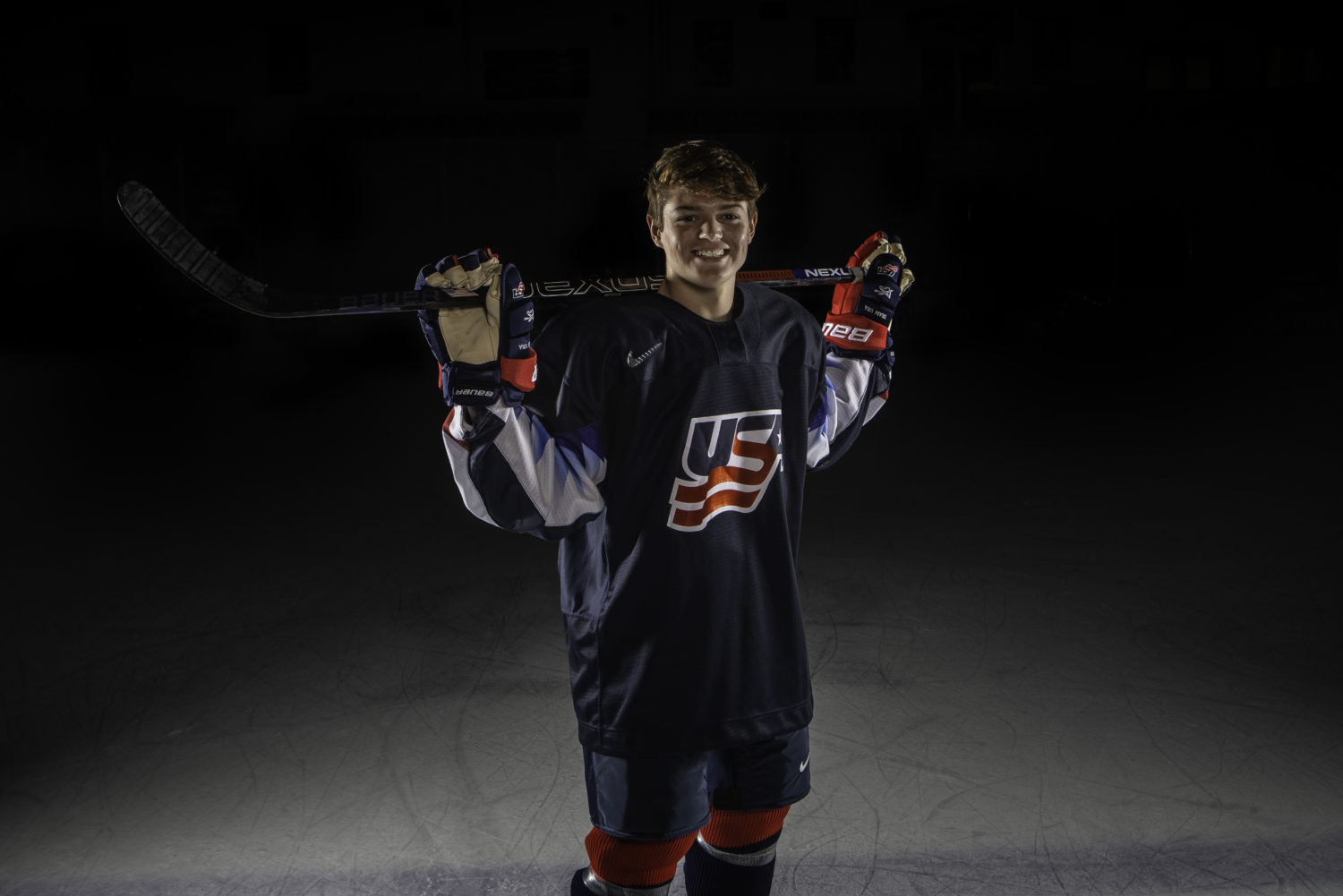 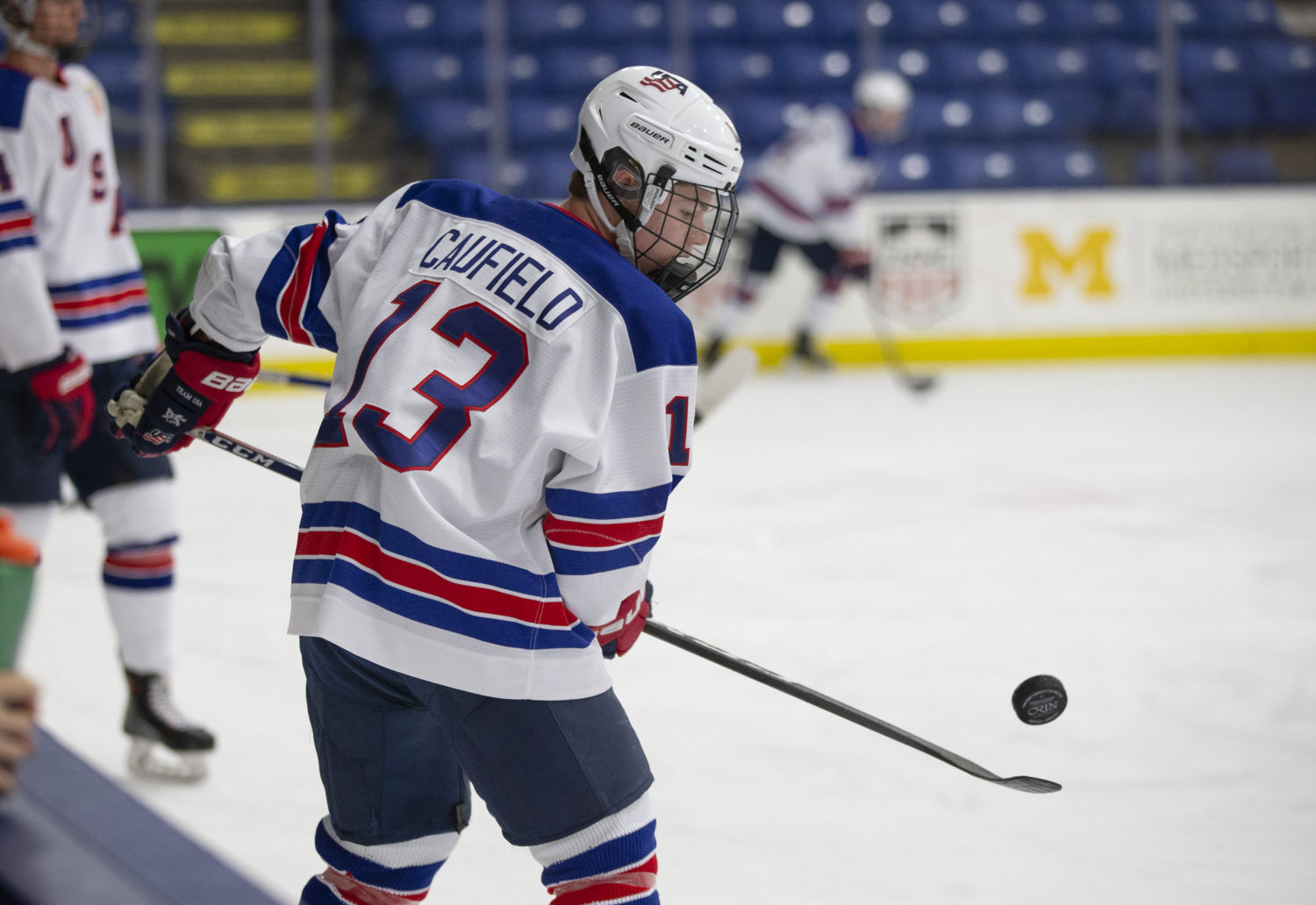